Inside the nation's first Publix grocery store. Publix Archives
Founded in 1930, Publix is an anchor in the Florida experience. It’s one of the few stores where millions of people of all ages have shopped their entire lives. Sure, it’s filled to the brim with food, but it’s also a piece of local history.

Publix Super Markets is the world’s largest employee-owned business, currently employing more than 190,000 people across the Southeast. Employees receive company stock, and the company strives to hire people with disabilities. The origin of those business practices can be traced to the philosophies of George Jenkins, the man who founded Publix at the onset of the Great Depression.

George Jenkins, founder of Publix Super Markets, as a child circa 1913.
State Archives of Florida/Dahlg­ren
Jenkins was born in Georgia in 1907 and grew up in Harris City, a small farming community whose economy was completely dependent on its cotton production. His father, George Jenkins Sr., owned the town’s general store, which sold everything from knitting needles to coffins. Jenkins' store, however, did not sell food; it offered everyday items that could not be produced locally. This is because the town’s residents grew their own food and traded food items with other members of the community. Young Jenkins would grow up working in his father’s general store, leaving him with an understanding of customer service and retail.

When Jenkins graduated from high school in the early '20s, an invasive insect spread through Georgia and wiped out all the cotton fields, devastating the economies of countless local farming communities. Now in debt, Jenkins’ father was forced to close his business. Young George left for college with no intention of going into the grocery business. He attended Georgia Tech with aspirations of becoming an electrical engineer.
Jenkins worked several jobs to put himself through school, one of which was a position at a realtor’s office. There, he heard about all the money being made in South Florida, which was seeing what historians now refer to as the Great Florida Land Boom of the 1920s. Jenkins and a friend who had a car drove to Tampa with only $9. They intended to make some quick money in real estate to pay for college.

But first, destiny intervened. A few days after arriving in Tampa, Jenkins met the owner of a local Piggy Wiggly who offered him a job. In need of money, Jenkins accepted the position and thrived. Within three months, he had been promoted and was managing the entire store. 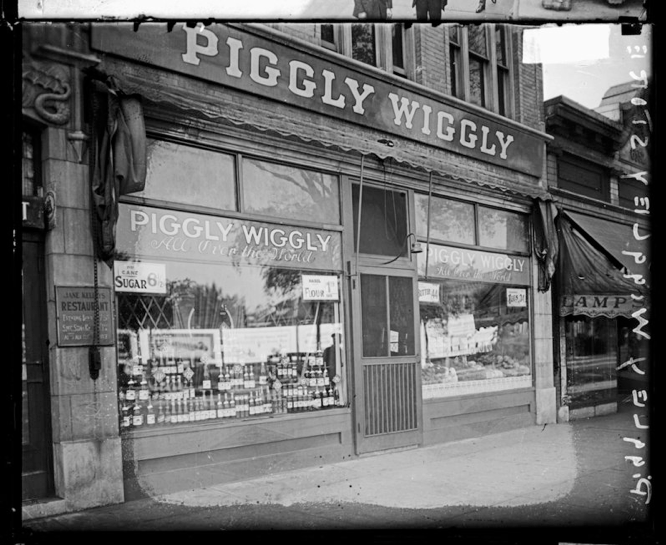 The Tampa Piggly Wiggly store where Jenkins cut his teeth as a grocer.
Chicago Daily News/Wikimedia Commons
The Piggy Wiggly was very different from his father’s general store. It was, essentially, an early draft of the modern grocery store. Prior to the founding of Piggly Wiggly, shops were not self-service; customers gave a list to the clerk, who would gather all of the items from behind the counter. Piggly Wiggly customers, on the other hand, picked up their own goods and took them to the clerk for payment. It must have been exciting for Jenkins to see the evolution of the industry in which he'd grown up. For whatever reason, Jenkins became overtly proactive about bettering the grocery-shopping experience.


In 1930, at the age of 22, Jenkins had dreamed up a trove of ideas to improve the functioning of the store. But he was ignored and demeaned by the store’s owner. Taking a leap of faith, Jenkins quit his job at Piggy Wiggly — which would have been a terrifying thing to do during the first year of the Great Depression — and opened his own grocery store right next door. He called it Food Store. 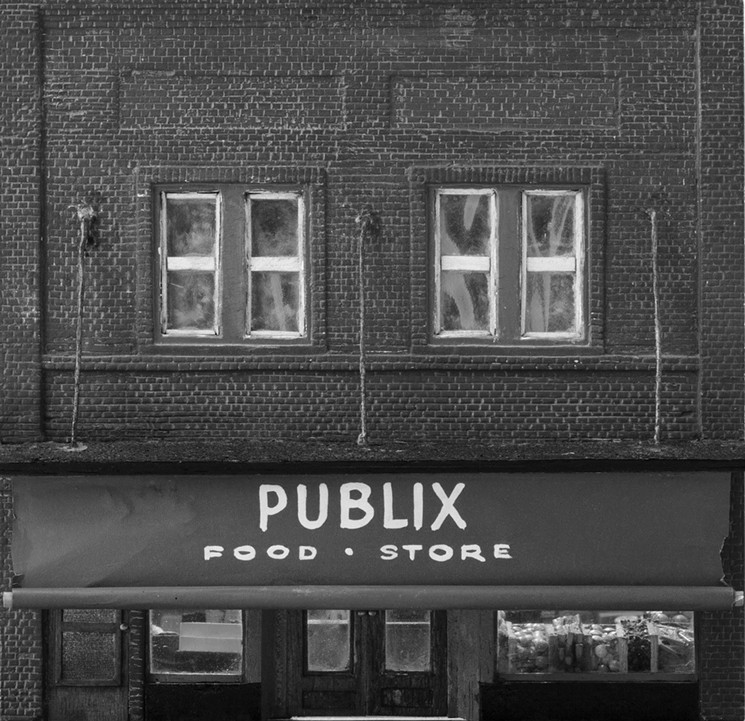 Publix Archives
The business was founded on the principles of cleanliness, customer service, and employee relations. Jenkins established profit-sharing and employee ownership, a hallmark for which Publix is still known. Publix became a successful community business, with gross annual sales in the early years worth $100,000 to $120,000 in today's dollars.

The '30s saw the birth of a new food-store concept: the supermarket. Grocery stores were now making the move into much larger spaces, enabling lower prices because of the store's ability to purchase in bulk. Jenkins, who was frequently traveling to glean new ideas and to identify products for his stores, must have been enticed by these latest developments in the industry. In 1940, he purchased a large plot of land and opened the first Publix supermarket in Winter Haven, Florida. It was, as many have called it, his “food palace.” 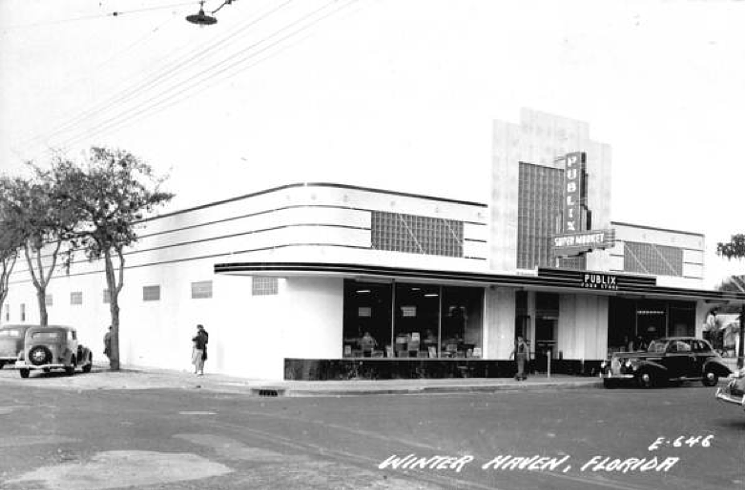 The first Publix supermarket opened in Winter Haven, Florida, in 1940.
State Archives of Florida
The store was nothing short of innovative. It was the first supermarket in history to have automatic sliding-glass doors and air conditioning. The architectural features of this building were very much in the spirit of art deco, an aesthetic Publix still occasionally uses today.

In 1945, Publix procured a warehouse and purchased 19 grocery stores from the chain All American, which Jenkins altered and rebranded under the Publix umbrella. By the late '40s, Publix had established itself as a chain.

The '50s were a period of rapid expansion and development for Publix. It was in this decade that Publix-branded foods began to be produced. These initial products included green peas, coffee, eggs, and bacon. It was also the time when Publix opened its first in-house bakery. 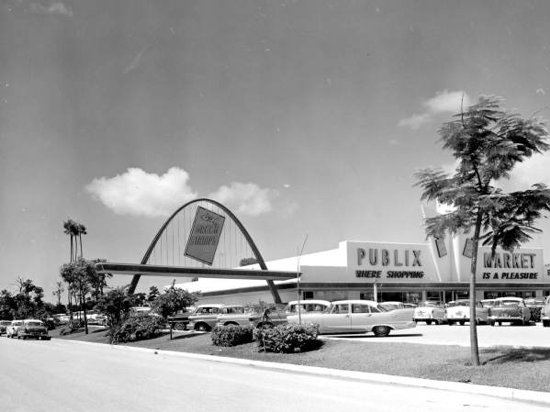 A Publix store in Bradenton, Florida, in 1958.
State Archives of Florida/Johnson
Despite the wealth his business had brought him, Jenkins remained a beloved figure among his employees. “Mr. George,” as store staff affectionately called him, maintained an open-door policy. He was reportedly willing to meet with any employee who had an idea for improvement, a courtesy he thought he had been denied in that Piggy Wiggly in 1930. Jenkins passed away in 1996.

Today, Publix is a sprawling collection of more than 1,100 stores, which grossed $34 billion in 2016. The company still advertises its mission to empower employees, please customers, and provide jobs to some of society’s most vulnerable citizens, including seniors and people with disabilities.

That is not to say Publix has always adhered to its own philosophies regarding employee rights. In 1990, women accounted for only 14 percent of the company's management team. In 1996, Publix Super Markets was sued for sexual discrimination by three women. The company, following national trends, now has a more representative and inclusive body of management.

Publix has also been under fire for mistreatment of LGBTQ employees. In 2014, a gay employee told New Times that he had been denied bereavement leave when his partner of 33 years passed away. Several other accusations have made their way to the forefront, including denial of management positions to self-identifying queer employees, the company's refusal to fill out the Human Rights Campaign worker-rights survey, and the firing of an employee after learning he had contracted HIV.

Still, Publix is an inextricable part of the Florida experience. Sometimes it’s hard to put a finger on exactly what has endeared it to locals. Perhaps it’s the white-and-green color scheme, which has been in the peripheries of most Floridians all their lives. Perhaps it’s the goodwill garnered by nearly a century of providing stock to staff. Hey, maybe it’s the food.

But it is this writer’s opinion that the philosophy of kindness and fairness on which the business was founded — even despite its recent failures to achieve those goals — is what keeps Floridians believing that shopping at Publix is a pleasure.
KEEP NEW TIMES BROWARD-PALM BEACH FREE... Since we started New Times Broward-Palm Beach, it has been defined as the free, independent voice of South Florida, and we'd like to keep it that way. With local media under siege, it's more important than ever for us to rally support behind funding our local journalism. You can help by participating in our "I Support" program, allowing us to keep offering readers access to our incisive coverage of local news, food and culture with no paywalls.
Make a one-time donation today for as little as $1.