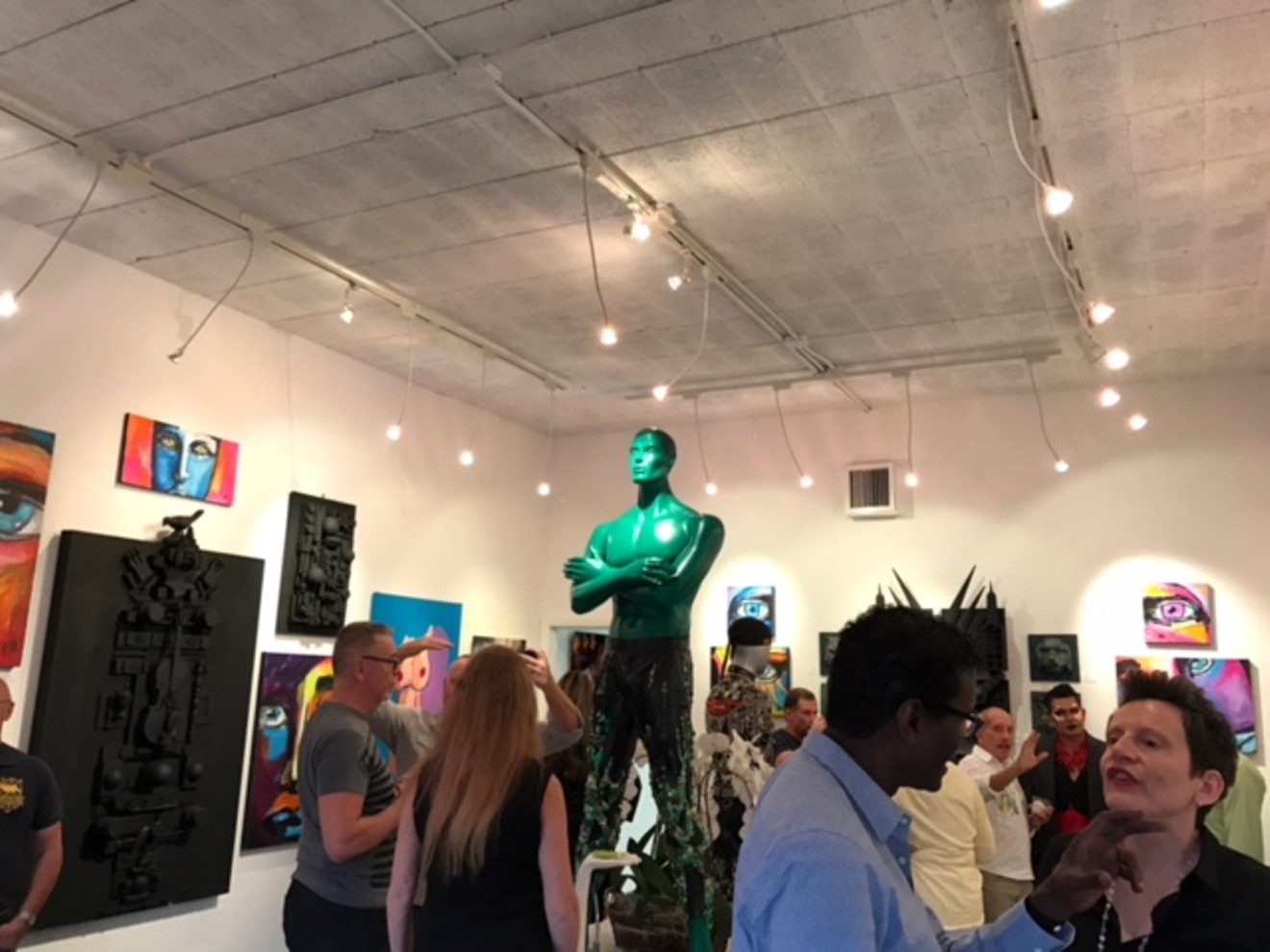 Art-Rageous is an annual, juried art competition and exhibit. Photo by Tedd Davis
When Tedd Davis worked as an event planner in Washington, D.C., some years ago, art was his refuge; now, it’s his life. Davis opened his gallery, Tedds Art Works, when he moved to South Florida four years ago. It quickly became “a place to celebrate art and promote both emerging and established artists,” he says.

Davis became an artist after winning an art competition as a teenager, a passion he continues to nurture today through his artwork, which includes mixed media construction using found objects. Davis also serves on the board for Arts United and often shares proceeds from art sales with non-profit organizations. But his greatest impact in the local art community is felt through events such as Art-Rageous, an annual, juried art competition and exhibit that will take place at Davis' gallery in the heart of Wilton Manors this Saturday, October 6.

Resident Artist Fabrizio Cruz curated Saturday's art show. He says he “looked for something different in each piece. It could be material-wise, like incorporating plastic or using another kind of pigmentation to paint. Something with a twist... Something that tells a story.” Cruz selected over 40 artists to be in the show. The participants will compete for cash prizes ranging from two to five hundred dollars.

Robyn Vegas, Director of Programs with Business for the Arts Broward, will be the judge for the evening, but guests are also invited to judge for themselves. Each person will get a sticker and place it by their favorite piece. At the end of the night, the work with the most stickers will be the recipient of the evening's People’s Choice Award.

Artists and advocates Trish Stypka and Jane Kreinberg — on the eve of celebrating their 44th anniversary as a couple — will both display artwork in the show. Stypka’s Fractured Society, a mixed-media piece predominantly made of clay, is a commentary on the current, divisive state of affairs in the United States. “It’s an example of how art can be used for social commentary, and it's also a great way to express my feelings in a way that I hope will resonate with the viewer,” says Stypka. She has been an artist most of her life but says she really developed her “artistic sensibilities since moving to South Florida in 2009. There's so much great art being produced here, that's been an inspiration to me."

Kreinberg has three pieces in the show; all photographs. She has been active as a photographer since the 1960s, long before digital techniques came along. "You could be creative with your images back then, but it was a much slower, more organic process in the darkroom," she says. "Just recently, I've been exploring the more creative possibilities of digital post-production work, creating more abstract images than in my past work. Tedd always encourages artists to push the boundaries of their art.”

Rosaria Vigorito returned to her childhood passion after being a full-time lawyer for many years in New York City. She retired from practicing law and became a full-time artist, a career transition she calls her "second coming out." Vigorito will have three pieces on display at the gallery. Among the Roses was created after Hurricane Irma, with pieces of plywood that survived the storm: Vigorito's first hurricane in Florida. She says her work honors the female nude, particularly giving homage to breasts, which she describes as an “essential symbol of femininity, nurturance, motherhood, and sexuality.”

Art-Rageous. 6 p.m. Saturday, October 5, at Tedds Art Works, 2422 N. Dixie Hwy., Wilton Manors; teddsartworks.com. Admission is free.
KEEP NEW TIMES BROWARD-PALM BEACH FREE... Since we started New Times Broward-Palm Beach, it has been defined as the free, independent voice of South Florida, and we'd like to keep it that way. With local media under siege, it's more important than ever for us to rally support behind funding our local journalism. You can help by participating in our "I Support" program, allowing us to keep offering readers access to our incisive coverage of local news, food and culture with no paywalls.
Make a one-time donation today for as little as $1.