The cover of the Sun and Sand comic anthology Illustration by Carina Vo
A colada with devious plans to control mankind. A giant Burmese python that pops out of the water during a fishing trip. An alligator swimming in a paint can. Where else but Florida could you dream up tales like these?

That's what independent publishers Neil Brideau and Jamila Rowser had in mind when they teamed up to make Sun and Sand, an anthology featuring the work of ten South Florida-based cartoonists who each created an original short comic about life in their hometown.

"There are so many great cartoonists in South Florida that I thought it would be really great to do a free anthology to put out and distribute in the area," says Brideau, who started Radiator Comics in 2014.

Brideau moved from Chicago to Miami a few years ago and began getting to know the local artist community through participating in pop-up shops and other events. After buying one of Rowser's comics and admiring her work, the two became friends, occasionally attending the same festivals, such as the Small Press Fair in Fort Lauderdale.

Rowser's company, Black Josei Press, specializes in work by and for women of color. She launched it in 2018 with the publication of her comic, Wash Day, a collaboration with cartoonist Robyn Smith celebrating the beauty of black women and their hair.

In 2019, Brideau received a Knight Arts Challenge Award, which provided some of the funding for the anthology. After coming up with the idea, he approached Rowser to ask if she wanted to co-edit and co-publish the collection. She loved the idea of amplifying local artists and creating something that could potentially attract new comic fans.

"Whenever I make comics, I want to hopefully introduce them to people who don't typically read them, and that's something that we wanted to do with Sun and Sand," Rowser says. "We want to show the variety of different stories and styles that you can see and hopefully inspire folks to create their own and see what else is out there for them. There are comics literally for everybody — it's just, you may have to look for them." 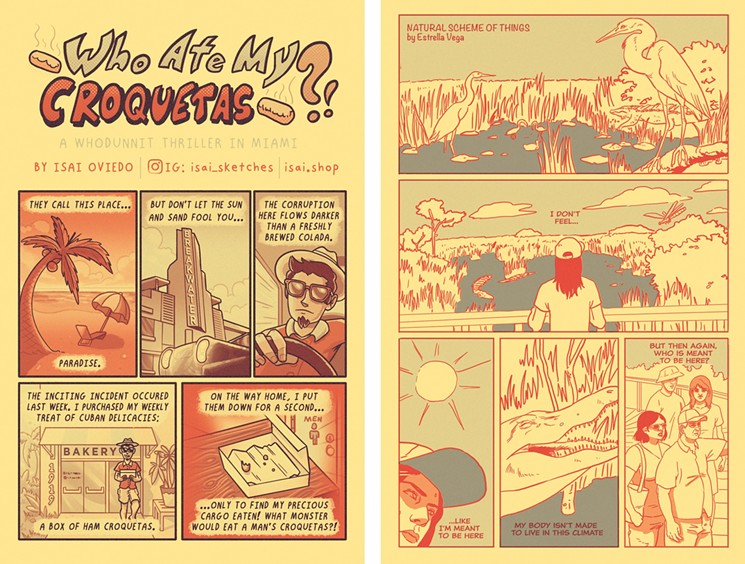 Who Ate My Croquetas?! and Natural Scheme of Things, two of the comics featured in the anthology.
Illustrations by Isai Oviedo and Estrella Vega
After reaching out to people in their networks and putting out a call for submissions, Brideau and Rowser chose ten pieces to highlight. The selections span a range of styles and genres but are unified by the sense of place they create.

"They all stand on their own as the unique voices of the cartoonists, but there are a lot of overlapping scenes in terms of food, animals, the climate," Brideau says.


"They all stand on their own as the unique voices of the cartoonists."

Together the stories paint a picture of life in South Florida that only people who have lived here can fully appreciate, full of mangos and croquetas, gators and manatees, and debates about whether a summer day is better spent at the beach or the pool.

"It's very South Florida and very relatable," Rowser says. "It's giving people a really good entry point where they can understand most of these stories. Even if there's some fantasy or adventure in them, it's still rooted in the life of living down here in Miami and Broward counties."

"I really wanted to celebrate the beauty of the coral reefs and the ocean that we have here, and I wanted to make it a bit fantastical," says Rowser, whose comic features a Biscayne Bay snorkeler who gets transported from the sea into outer space. Inspired by parallels between the ocean and the cosmos, As Above, So Below was written by Rowser and illustrated by artist Carina Vo.

For his comic, Critters, Brideau turned a broad eye to South Florida wildlife, from peacocks and roosters to tiny dogs accompanying their owners to brunch, to the bus, which often seems to have a mind of its own.

The team initially planned to distribute print copies of the compilation on Free Comic Book Day, which was to have been celebrated May 2. When the coronavirus forced the event to be postponed, they decided to make the digital edition available anyway. They still plan to give out print copies at comic shops, galleries, and libraries to coincide with a rescheduled FCBD.

"We could all use fun things," Brideau says. "The cartoonists all put in so much great work and effort into these comics that it would be painful to just sit on them until shelter in place orders were lifted. It's been really exciting to have them now out in the world."

Sun and Sand Comic Anthology. Published and distributed by Black Josei Press and Radiator Comics. Read at sunsandcomics.wordpress.com.
KEEP NEW TIMES BROWARD-PALM BEACH FREE... Since we started New Times Broward-Palm Beach, it has been defined as the free, independent voice of South Florida, and we'd like to keep it that way. With local media under siege, it's more important than ever for us to rally support behind funding our local journalism. You can help by participating in our "I Support" program, allowing us to keep offering readers access to our incisive coverage of local news, food and culture with no paywalls.
Make a one-time donation today for as little as $1.