The Sweet Social Science: Mayweather vs. Paul Is All About Eyeballs and Clicks

Logan Paul during a media event at the Hard Rock Stadium on May 6. Photo by Cliff Hawkins/Getty Images
click to enlarge

Logan Paul during a media event at the Hard Rock Stadium on May 6.
Photo by Cliff Hawkins/Getty Images
In a recent Instagram story on his account, a scruffy-bearded Logan Paul rides in a car shooting a selfie video. The social-media provocateur with more than 20 million followers delivers a message to Floyd Mayweather, one of the world's greatest living boxers.

“Hey champ, you are not the only person who makes people bleed when they are sparring,” Logan says in the video. “Besides, your sparring partners are human blood sprinklers, bro. You are sparring trash, you fucking pipsqueak.”

You may be wondering why an Internet-famous dudebro who’s only had two quasi-professional fights that ended in a draw and a loss is feeling bold enough to trash-talk Mayweather, who retired from the sport four years ago as a reigning world champ with a pristine 50-0 record and was declared “Fighter of the Decade” for the 2010s by the Boxing Writers Association of America.

Well, for reasons closely associated with a payday approaching nine figures, Mayweather agreed to lace up his gloves for an exhibition match against Logan Paul, who, along with his younger brother, Jake, has turned the boxing world on its head by landing lucrative deals to showcase their unpolished fighting skills in front of live and pay-per-view audiences. Last month, Showtime signed a pay-per-view deal with Jake Paul, who is 3-0, to broadcast his next fight.


On June 6, Logan Paul and his internet fanbase will find out whether his fists can back up his mouth. The 26-year-old, 180-pound YouTuber is going toe-to-toe with the 44-year-old, 150-pound veteran boxer at Hard Rock Stadium for a main event that will be televised on Showtime for anyone willing to fork over $50. On StubHub, floor seats are listed in the $2,000 to $5,000 range, while the coveted ringside seats are priced north of $10,000 apiece. According to sports business reporter Darren Rovell of Action Sports HQ, someone has already dropped $87,000 for four ringside seats.

While the Paul brothers’ rise may seem unorthodox to casual boxing observers, it’s in tune with how the sport constantly searches for new avenues to reignite interest in watching two men beat each other up. Since Mayweather’s departure, professional boxing has struggled to find a new larger-than-life champ who can draw tens of millions of fans. At the same time, Logan and Jake Paul are capitalizing on the sport’s desperation for more eyeballs by leveraging their status as successful social-media influencers to skip a more traditional path to the upper echelons of the boxing ranks.

“We train a bare-knuckle fighting champion who can sell 20,000 tickets to a show,” Spencer says. “But he’s not going to sell millions of dollars on pay-per-view like the Paul brothers, who have a strong allegiance from their YouTube fans. Showtime is in the business of entertainment. If you can’t bring in a fan base, they can’t afford to put you on.”

Spencer also trains Daniele Scardina, an Italian boxer with a 19-0 record, 15 by knockout, who is the current International Boxing Federation’s international super-middleweight titleholder.

“He went on Dancing with the Stars in Italy, and his fan base for his fights has grown immensely,” Spencer says. “He has also grown his following on Instagram. He’s built an allegiance with Italian fans. There is no reason to show up if it’s a guy you have never heard of.” 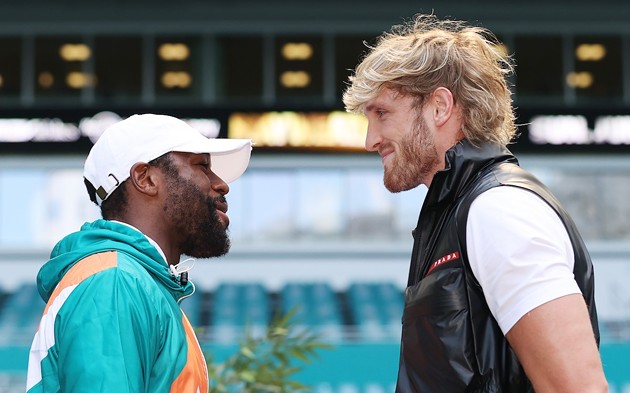 There is more financial incentive for Floyd Mayweather to fight a social-media personality like Logan Paul than another professional boxer.
Photo by Cliff Hawkins/Getty Images
When it comes to battling for social-media supremacy, the Paul brothers topple most professional boxers except for Mayweather, who clocks in 25.8 million followers on Instagram. Logan has 19.4 million Instagram followers and 23 million YouTube subscribers, while Jake has 15.7 million Instagram followers and 20.4 million subscribers on YouTube.

On August 25, 2018, the Paul brothers officially entered the boxing business by coheadlining amateur bouts against British YouTuber KSI and his younger brother Deji Olatunji. Logan and KSI fought to a draw, while Jake beat Olatunji by a technical knockout. According to media reports, pre-fight promotional videos and diss track videos produced by the fighters generated more than 170 million views on YouTube. The actual fight sold out the 21,000-seat Manchester Arena, generating $3.5 million in ticket sales. More than 2.25 million viewers watched it live, including one million who paid $10 apiece to watch it and 1.2 million who caught the fights via illegal streams on Twitch.

Reports state YouTube took 30 percent of the pay-per-view revenue, with KSI and Logan evenly splitting the remaining 70 percent. Logan — who claimed he lost money on expenses such as coaches, travel, and lawyers — split his share with Jake. For Jake’s most recent fight, a first-round knockout win over retired MMA fighter Paul-Ben Askren, roughly 1.5 million people paid $50 to tune in to Triller’s pay-per-view event. Triller reportedly generated $75 million in sales, and Jake won a $690,000 purse.

According to media reports, Logan could earn $10 million for fighting Mayweather, while the retired champ is looking to bank $100 million from the fight. Elvis Crespo, a Palm Beach-based boxing manager whose roster includes Olympic gold medalist Daniyar Yeleussinov and Olympic bronze medalist Ivan Dychko, both of whom are undefeated, says he doesn’t see anything wrong with the Paul brothers' rapid ascent.

“People don’t understand that Mayweather is selling entertainment,” Crespo explains. “In the business of entertainment, can you put butts in the seats, and are you moving the needle? Mayweather and the Paul brothers do both.”

Of the two brothers, Crespo believes Jake has a better shot at building a respectable boxing career.

“If you give him time to develop, he could become a B-level fighter,” Crespo says. “These are guys who are good enough to give people what they want to see. He hasn’t faced a fighter who is better than him, but he is taking it seriously.”

In a TikTok video uploaded in April, Mayweather admitted that fighting Logan is more about the money and entertainment than taking on a current reigning champ.

“I can fight a regular fighter right now, and I can guarantee myself $35 million, maybe $50 million,” Mayweather says in the video. “Or I can fight Logan Paul or a YouTuber and go out, entertain, have fun, and make nine figures — $100 million or more.”

Floyd Mayweather vs. Logan Paul. 8 p.m. Sunday, June 6, at Hard Rock Stadium, 347 Don Shula Dr., Miami Gardens; 305-943-8000; hardrockstadium.com. Tickets cost $50 to $3,000 via ticketmaster.com.
KEEP NEW TIMES BROWARD-PALM BEACH FREE... Since we started New Times Broward-Palm Beach, it has been defined as the free, independent voice of South Florida, and we'd like to keep it that way. With local media under siege, it's more important than ever for us to rally support behind funding our local journalism. You can help by participating in our "I Support" program, allowing us to keep offering readers access to our incisive coverage of local news, food and culture with no paywalls.
Make a one-time donation today for as little as $1.

Francisco Alvarado was born in Nicaragua and grew up in Miami, giving him unique insight into the Magic City and all its dark corners. An investigative reporter with a knack for uncovering corruption, Alvarado made his bones as a staff writer at Miami New Times and remains in dogged pursuit of the next juicy story.
Contact: Francisco Alvarado
Follow:
Twitter: @thefrankness

Don't Miss Out
SIGN UP for the latest arts & culture news, free stuff and more!
Join Today
Sign Up
Become a member to support the independent voice of South Florida and help keep the future of New Times FREE
I Support Learn More