Elgin Jumper shows his Seminole Warrior from the Patchwork Mosaic collection on display at History Fort Lauderdale. Photo by Analicia Austin
History Fort Lauderdale is celebrating local Seminole artists during Native American Heritage Month in November. A two-month-long exhibit entitled "Patchwork Mosaic: An Indigenous Gathering of Seminole Masterworks" features a collection of traditional and contemporary art from a dozen artists from the Seminole Tribe of Florida.

The exhibition is groundbreaking in many ways. Tara Chadwick, the curator of exhibitions at History Fort Lauderdale, points out, “Having 12 Seminole artists across three generations collaborate on a show hasn’t been done anywhere before.”

Featured are Elgin Jumper, a popular poet and mixed-media theatrical artist. Joining him is his niece, Stephanie Hall, a rising poet and artist who debuted just four years ago at History Fort Lauderdale. Gordon Oliver Wareham, known for his photography and his skill on the Native American flute, will have works highlighted in the installation. Also figuring prominently will be sisters Durante, who helped curate the exhibition, and graphic artist Tia Blais-Billie.

Currently a student at the University of St. Andrews in Scotland, studying art history and business management, Dante recently curated a show of Indigenous art at Seminole Hard Rock Hotel and Casino in Hollywood, sponsored by Nova Southeastern University Art Museum. Tia, a recent graduate from the Rhode Island School of Design, creates everything from comics to marionettes to storyboards. She recently told the Seminole Tribune her work often incorporates motifs of traditional Seminole culture and themes related to identity and family. 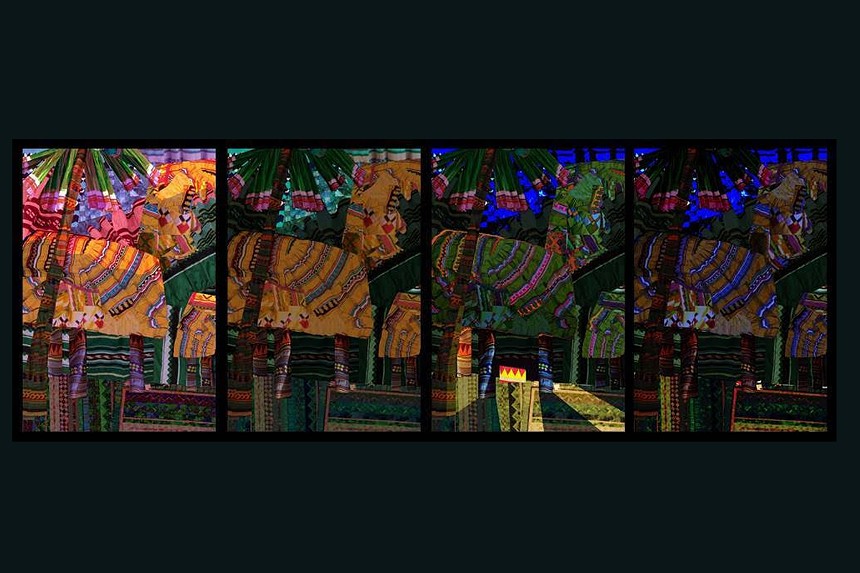 The show is co-curated by the group, along with Jimmy Osceola, Blais-Billie, and Chadwick.

The exhibit, which is set in the museum's New River Inn building, is timed to coincide with Native American Heritage Month, enacted in 1990 by President George H. W. Bush, to commemorate the history, culture, and contributions of Native people in the United States. Patricia Zeiler, executive director of History Fort Lauderdale, says, “It is an honor and a privilege to partner with the Seminole Tribe of Florida.” She added, “Fort Lauderdale is a city woven from the colorful traditions and cultures of the indigenous communities that preceded us. Much of our success and influences can be traced back to Seminole ancestors.”

Adding another layer of significance, History Fort Lauderdale is in its second year as an Art Basel partner cultural institution. Art Basel originated in Switzerland in the 1970s as an arts organization connecting artists, galleries, and collectors worldwide. Its Miami outpost opened in the early 2000s, initially featuring 160 galleries from 23 countries. This year is the 18th edition of Art Basel Miami Beach, where 269 galleries from 33 different countries will be represented.

"Patchwork Mosaic: An Indigenous Gathering of Seminole Masterworks." November 15 through January 12 at History Fort Lauderdale, 219 SW Second Ave., Fort Lauderdale. Tickets cost $5 to $15 via historyfortlauderdale.org.
KEEP NEW TIMES BROWARD-PALM BEACH FREE... Since we started New Times Broward-Palm Beach, it has been defined as the free, independent voice of South Florida, and we'd like to keep it that way. With local media under siege, it's more important than ever for us to rally support behind funding our local journalism. You can help by participating in our "I Support" program, allowing us to keep offering readers access to our incisive coverage of local news, food and culture with no paywalls.
Make a one-time donation today for as little as $1.