Best Gay Bar in Which to See and Be Seen 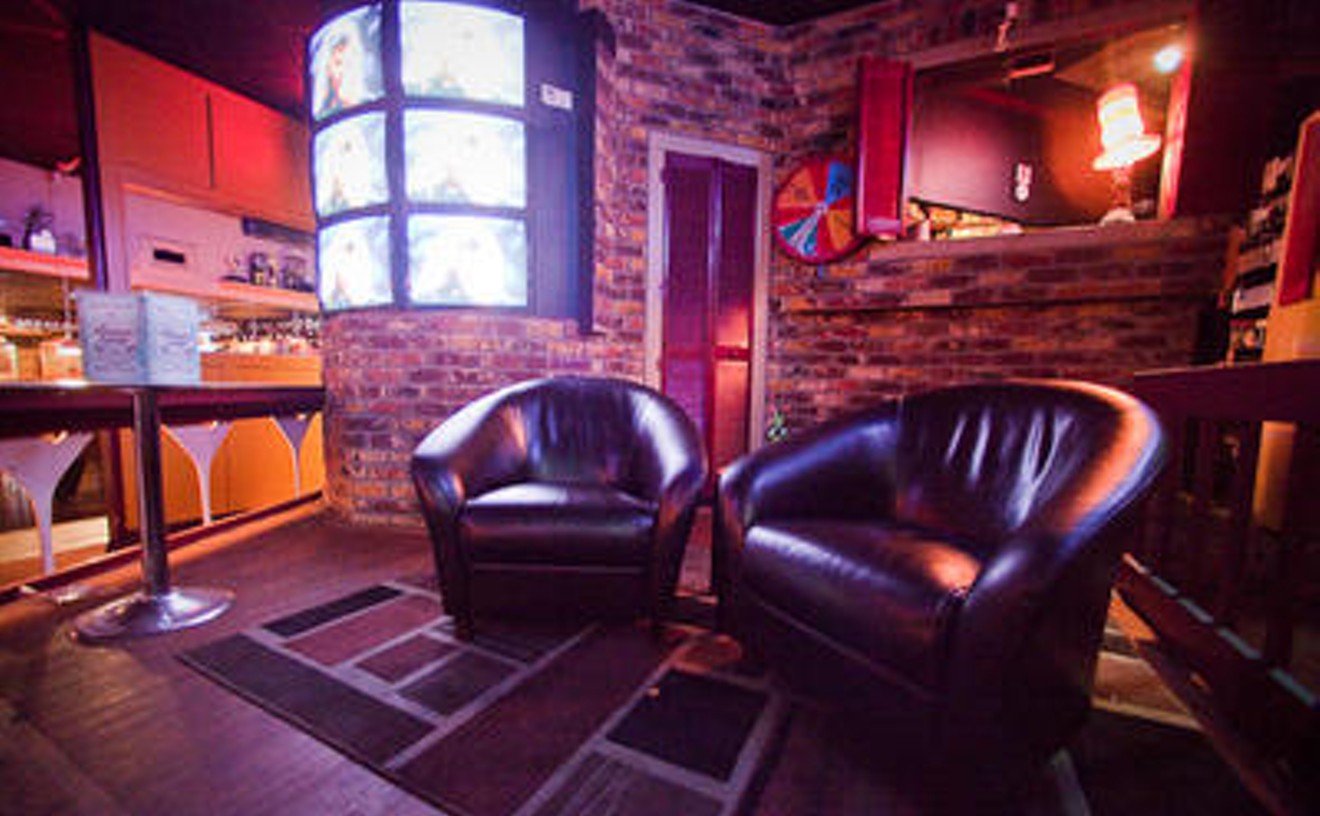 Ian Witlen
Your Beamer's buffed to a radical shine, your pecs are engorged from a brisk workout at the gym, you have a fresh and fab haircut, and you're horny. Better make the scene at the Alibi, where the eye candy is sweet and the drink deals get the juices flowing. This hip hangout in the heart of Wilton Manors -- the city-within-a-city that is fast becoming a national gay-relocation destination -- features a comfortable lunch patio outdoors, a bank of video screens and a pumping sound system indoors, and even a delightfully equipped men's room in the back. More important, it's usually filled with hot-looking men looking for other hot-looking men. Don't say you weren't warned.

Judging by the fuel prices, you'd think the Mobil station across from the Boca Teeca Country Club offers petrol Cordon Bleu instead of plain old gasoline. And while what you get at the pump is the same old, same old, the convenience store shames most gourmet boutiques. Clear-plastic bins of loose jelly beans and other candies cover half of the front wall -- you can fill a little plastic bag with cotton candy, caramel popcorn, bubble gum, and pear-flavor Jelly Belly beans. Next to the candytopia stands the self-serve frozen yogurt station; faced with eight flavors, three sizes, and several toppings, one can easily fill up with more lactose than octane at this Mobil. The station also offers cold drinks, a few plebian items (for example, potato chips), and a glass case of croissants and glorified donuts. Ain't Boca grand?

When Broward County bicycle coordinator Mark Horowitz suggested putting bike racks on buses more than a decade ago, people thought he was crazy. The bikes would fall off, they'd get stolen, no one would use the racks -- Horowitz heard all the complaints. Still he persevered. Two years ago Broward County transit officials finally agreed to try the racks; last summer Palm Beach County transit followed suit. Today officials in both counties declare their programs -- Broward's BYOB (Bring Your Own Bike) and Palm Beach County's BOB (Bikes On Board) -- unmitigated successes. An estimated 800 bicyclists are taking the bus daily in Broward, as are an estimated 500 people in Palm Beach. Pretty impressive numbers for transit systems that have struggled for years to increase ridership. In fact, officials say, they now face a different problem: More bicyclists want to use the buses than they can handle. Horowitz says that problem won't be solved easily or soon. Each rack can accommodate only two bikes; bigger racks would stick out too far, creating a safety hazard. But being too popular is a nice problem to have -- for a change.

Plenty of crackerjack reporters slave away at The Herald's Broward County headquarters. We think, for example, that Lisa Arthur, Dan de Vise, and Bill Yardley do some solid work -- given the constraints of daily journalism. But this award should go to someone unsung; thus our pick is Diaz. A general-assignment reporter with solid news judgment and a fluid writing style, Diaz has proven himself adept at both cops-reporting and feature-writing. He shies from sensationalism, writes with flair, and imparts his work with a rare sensitivity. Diaz's empathy for his subjects and sense of fairness distinguish him as one of The Herald's most promising up-and-coming scoops.

To most people in Broward County, Scherer was just another lawyer/lobbyist type who scurried around getting government contracts. (His plum is a North Broward Hospital District deal.) He wasn't really in the public eye much -- which turns out to be a good thing for all concerned. When the manual recount was under way in Broward, Scherer, a GOP operative, did a pretty good job of turning the procedure into a national joke. As the canvassing board counted votes and the television cameras rolled, Scherer started screaming at the counters like a spoiled child. "You are trolling for votes here!" he yelled. "You can't get this election any other way.... You told these lawyers to go bring you more votes!" Scherer's idiotic and arrogant outbursts (he had two of them on successive days) embarrassed not only him but also our fair county and the entire nation. Thank goodness Circuit Judge Robert W. Lee had the good sense finally to toss him out of the proceedings. Now if only we could toss him out of Broward altogether....

LePore was once almost universally admired by politicians in Palm Beach County. She has a genuine charm, works hard, and seems truly to care about the integrity and fairness of the election process. Time was, nobody would say a bad thing about her. Then came her ill-conceived butterfly ballot, which led thousands of Al Gore's supporters to accidentally vote for Pat Buchanan, thus giving W. the presidency. The world fell in on her. Pundits openly ridiculed her. Angry Dems flooded her office with hate mail. She instantly became the Bill Buckner of national politics, the woman who booted the presidential election. At the same time, she tirelessly had to coordinate the confusing recount mess. In handling all that incredible pressure, LePore proved she did indeed deserve the respect she'd earned for her years of exemplary service. Yet she will forever be remembered for her botched ballot. 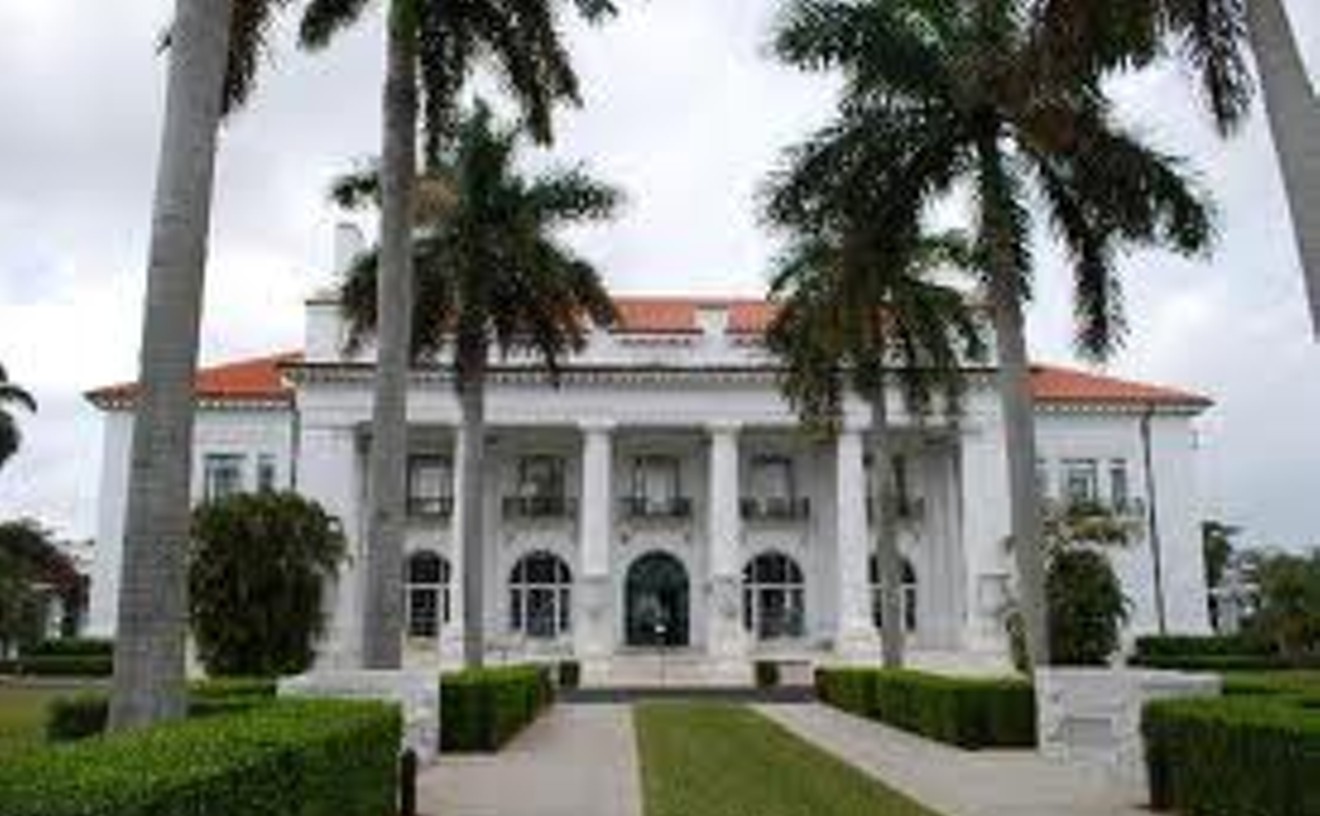 Put simply, South Florida as we know it today probably wouldn't even exist if it weren't for a retired millionaire named Henry Flagler and his vision of linking the state's entire east coast, from Jacksonville to Key West, by rail. And his Palm Beach estate, Whitehall, now known as the Flagler Museum, is the ultimate monument to the man who paved the way for a Florida economy dominated by agriculture and tourism. When he embarked on the project that would make him the father of Florida development, Flagler had already amassed a fortune through his Standard Oil partnership with, among others, John D. Rockefeller. As if a second career as a railroad magnate weren't enough, Flagler also constructed a series of spectacular buildings as he made his way down the peninsula: St. Augustine's Hotel Ponce de Leon, Palm Beach's Royal Poinciana and the Breakers hotels, and of course Whitehall. The 60,000-square-foot, 55-room "Taj Mahal of North America" became the winter home of Flagler and his wife, Mary Lily Kenan, and today it's preserved in all the glory that led the New York Herald in 1902 to characterize it as "more wonderful than any palace in Europe, grander and more magnificent than any other private dwelling in the world...." Wander among the trappings of Flagler's lavish lifestyle (including his own personal railcar), and praise him -- or curse him -- for making South Florida possible.

A creative writing professor at Florida International University, Duhamel writes the sort of edgy-but-life-affirming poems of which we could all use a little more in our lives. She specializes in fusing her often racy introspection with politics and pop culture; her acute sense of the absurd and her playfulness serve as a strangely perfect backdrop for the exploration of topics such as feminism or the military. In one poem, "Kinky," Duhamel depicts Barbie and Ken switching heads:

Barbie squeezes the small opening under her chin

Atop his girlfriend's body, loosely,

Destined to gaze from the back windows of cars.

The poem goes on to depict a strange sexual encounter that turns gender identity on its head. Duhamel seems to make the mind's strange, everyday meanderings artful, and she imparts upon all of us a delightful sense that we, too, live in a poem.

When the presidential race was on the line last fall, the world's attention focused on Florida. And as everyone remembers, we became a nationwide laughingstock, a bunch of nincompoops who couldn't punch a chad to save our subtropical lives. When the Republican-controlled state legislature threatened to stick its trunk into the mess, the giggles turned into guffaws. "Those crackers are actually pondering naming their own delegates," said one Tennessee pol. "Why that's unconstituuuuutional...!" CNN, MSNBC, and scads of foreign TV geeks covered our state's capital like a strangler fig on a gumbo-limbo. Who saved the day? Democratic Rep. Lois Frankel of West Palm Beach. An ardent feminist with a keen ear for smart political talk, she rallied the beleaguered Democrats (mostly from SoFla, of course) and talked the talk for hours at a time on worldwide airwaves. She always looked fresh, and her speeches were crisp. In the end the legislature adjourned without a decision, leaving the U.S. Supreme Court with one less constitutional conundrum to consider. (Then the Supremes decided to break a statistical tie with a 5-4 vote, a call that will be debated and rehashed through the ages.) Even so, thanks to our Lois, the world realized that every Floridian isn't crazy -- only those house leaders whose names rhyme with weenie.

We all know that politicians are scoundrels at heart, and we all long to see them punished for their evil deeds, though too often we cannot quite catch them in the actual doing of said deeds. They're slippery little devils, which is how they came to be politicians in the first place. So it is all the more delicious when an especially powerful pol slips up and is justly punished. Such is the case with former Broward County commissioner Scott Cowan. Last year Cowan got busted for filching funds from his 1998 campaign. He wrote checks to fictitious people and cashed them himself, sprinkled money on his daughters, bought himself some nice furniture -- the works. Really blatant, really stupid stuff from the man once considered the king of county politics and a dealmaker extraordinaire. Cowan pleaded guilty to six misdemeanor violations of election laws last November and got a six-month jail sentence and a $6000 fine. Most delicious of all: When a judge let him out on work release, the once-mighty Cowan got a job at a pizza parlor.