If your neighborhood contains folks who like window treatments designed by Ralph Lauren and upscale comfort food cooked by chef-partner Grant Johnson, formerly of Max's Beach Place/Prezzo fame, then Henry is your man... er, dog. Owned by Burt Rapoport, who named the restaurant after one of the most important members of his family -- his Prince Charles toy spaniel -- Henry's is an urban version of a country bistro. Pine hutches filled with ceramic knickknacks and an open kitchen and wine room fill the air with as much rural warmth as Johnson's pork T-bone with sweet potato gratin and country chicken casseroles bring to the belly. The only drawback: Henry's has become so popular with the locals that it's tough to squeeze in even for an after-movie hot fudge sundae. But no one really minds. After all, rubbing designer-clad elbows in a tightly engineered space that dedicates itself to a spaniel is precisely what dining in a Palm Beach County neighborhood restaurant is all about.

If you consider that won ton, according to food writer Gretchen VanEsselstyn, actually means chaos (named so for the imprecise edges of the dough), then Bamboo Garden is certainly the place to experience it. And we mean that literally. The crowd that gathers here for dim sum on weekends is often so manic -- and so darn hungry for pork-filled dumplings, won tons, sausage rolls, smoked vegetable spring rolls, and the like -- that the atmosphere is indeed rather charged. We suggest you frequent the eatery during the weekdays, when you can enjoy this Chinese feast in relative quiet and comfort. After all, when Bamboo Garden says dim sum all day, it's no snake offering forbidden knowledge along with apples -- it's the real, edible Eden, so savor at your leisure.

If you judge a sushi restaurant not by what's familiar but by what's exotic, then Kawai is completely for you. Sure, the eatery stocks the raw basics: superb salmon, glistening tuna, supple hamachi. And yes, the menu offers the requisite rolls, 30 in all, ranging from combos highlighting barbecued eel to those featuring soft-shell crab. But Kawai also keeps the Arctic surf-clam lover in mind and enjoys displaying specials that have come in fresh that day, posting hand-lettered signs on the sushi bar. Here, you can glean sea urchin, tangy and mineral-rich, or raw, sweet prawn that's served with a side of the shrimp's deep-fried head. If you grow bored with experimentation, there's always the cooked Korean food to sample, an endeavor well worth undertaking -- and a culinary journey that can't be replicated in any other South Florida eatery.

Sisters are great at many things -- trading clothes, doing each others' hair, scheming against Dad for later curfews, and, naturally, the occasional cat fight. But they may just be best at making subs. Home of the "Big Sister" -- a six-foot Italian hoagie stuffed with ham, Genoa salami, cappacola, cheese, and a host of condiments including black olives and hot peppers -- Sisters' Subs is steps above any would-be sibling. The place also takes its theme seriously. With the exception of the "Ricky" and the "Rocky," two cheesesteak-type subs, all sandwiches, salads, and side dishes are named for women. Is there anything more to say than, "You go, girls"? Yes, apparently, if you ask a man whose fondest dream it is to say, "I'll have the Marilyn." Or whose biggest nightmare it could be to admit, "I'd like the Mom."

Chocolate fiends, look no further. The homemade chocolate-chocolate-chip gelato is, for starters, a wonderfully rich end to any meal. But it's even better when paired with a molten chocolate cake with a center as gooey as any romantic's heart, or with the fudge brownie truffle that's moistened with raspberry and white chocolate sauces. Of course, for the few folks in this world who actually don't like chocolate, other dessert options are just as tempting: crispy coated cheesecake, Bistro apple pie, and our particular favorite, the hot fruit cobbler of the day baked with an oatmeal cookie topping. Zenith is right: This bistro is our summit for sweets.

You'd be forgiven for thinking that ice cream is almost an afterthought here. After all, no store has stocked so much paraphernalia and housewares dedicated to our feline and canine companions since Garfield and Clifford were popular. Not one place keeps so many candles on the shelves unless it's hurricane season. And very few shops can offer such a plethora of products made with key lime juice -- north of Key Largo, that is. But this kitschy little store is indeed an ice cream parlor, serving up scoops of some of the most luscious frozen dairy treats around. Keep it simple with pure vanilla or rich chocolate; give it jazz with concoctions that combine caramel, fudge, walnuts, cookie dough, peanut butter, and even some of that healthier fruit stuff known as "strawberries" and "bananas." Follow it up with a stroll of picturesque Lake Avenue. Given the district's relatively short length, you probably won't burn anything off. But going to the end of the block certainly gives you a reason to turn back around and pass Key West Crossing just one more time.

Any reasonably good bakery really needs just one thing to entice you through its doors: the aroma of freshly baked bread. Once inside, however, a little more is required, such as crunchy baguettes, buttery croissants, perfectly shaped dinner rolls. Croissan'Time has all this and much more, from nearly a dozen varieties of cookies to such decadent classic French pastries as éclairs and napoleons (which also come in miniature versions) to cakes and pies as simple as lemon tarts and apple pies or as fancy as pecher mignon. And then there's variety within variety. The namesake croissants come plain or with any of ten fillings. Fruit tartelettes are available with nine fillings over either a custard or an almond-cream base. Breads and rolls come in whole wheat, rye, pumpernickel, and sourdough; seed options include caraway, poppy, and sesame. The bakery, which opened in 1986, has risen to acclaim under the leadership of owner Bernard Casse, a Frenchman who underwent a variety of apprenticeships, then worked at such tony New York City restaurants as La Grenouille and Regine's before moving to South Florida. He was employed at the Little French Bakery in Palm Beach, detoured briefly to Houston, Texas, then worked at Miami's Ovens of France, where he met his future business partner for Croissan'Time. The partner has since retired, and the bakery has added a sandwich counter and a gourmet shop that offers wine, cheese, meat, pasta, and various delicacies. But it's the breads, pastries, and other baked goods -- all made fresh on the premises daily -- that keep people coming back.

There are plenty of New Yorkers in South Florida, but there's not nearly enough New York. Most expatriates judge any city outside of the Big Apple by the Chinese restaurants, but a really good bagel is harder to craft than moo goo gai pan, thus making it a much better measure of a city. The best bagel in South Florida can be found in Pompano Beach, a hairsbreadth outside of Palm Aire. Bagel Snack features bagels in all the traditional New York varieties: plain, poppyseed, sesame, rye, pumpernickel, onion, and garlic, but you won't find anything as sacrilegious as jalapeño or cranberry in the big plastic bins. They make bagels the old-fashioned way: First they boil 'em; then they bake 'em. Pick your favorite flavor and you'll get chewy, not doughy, bagels with a crust that requires teeth but won't break one. Bagels cost 50 cents by themselves, 99 cents slathered with butter or $1.39 with a smear of cream cheese. A baker's dozen of 14 will run you six bucks. Bagel Snack also has the only decent bialys in South Florida and fresh cream cheese that will make the prepackaged stuff taste like paste.

Alex's Flamingo Groves mashes locally grown Indian River oranges into juice -- a fresh batch daily of Valencias, navels, honeybell tangerines -- and sells the sweet byproduct by the half-gallon ($3.25) and gallon ($5.75). The roots of the business go back to 1927, when Floyd Wray opened Flamingo Groves in Fort Lauderdale. Flamingo Groves merged with Alex's Citrus and Packing Plant in 1979 and set up operations in Dania Beach. The packing plant is now located in Palm Beach County, but the storefront on Federal Highway still has the feel of a roadside stand. And like a roadside stand, it's open only during the citrus season, which runs from November through April. In addition to juice, Alex's sells jars of marmalades and jellies, including tangerine and jalapeño, chocolate and gummi alligators, and other treats. But the juice is the dulcet draw. Take a sample swig. It's like drinking sunshine cold. 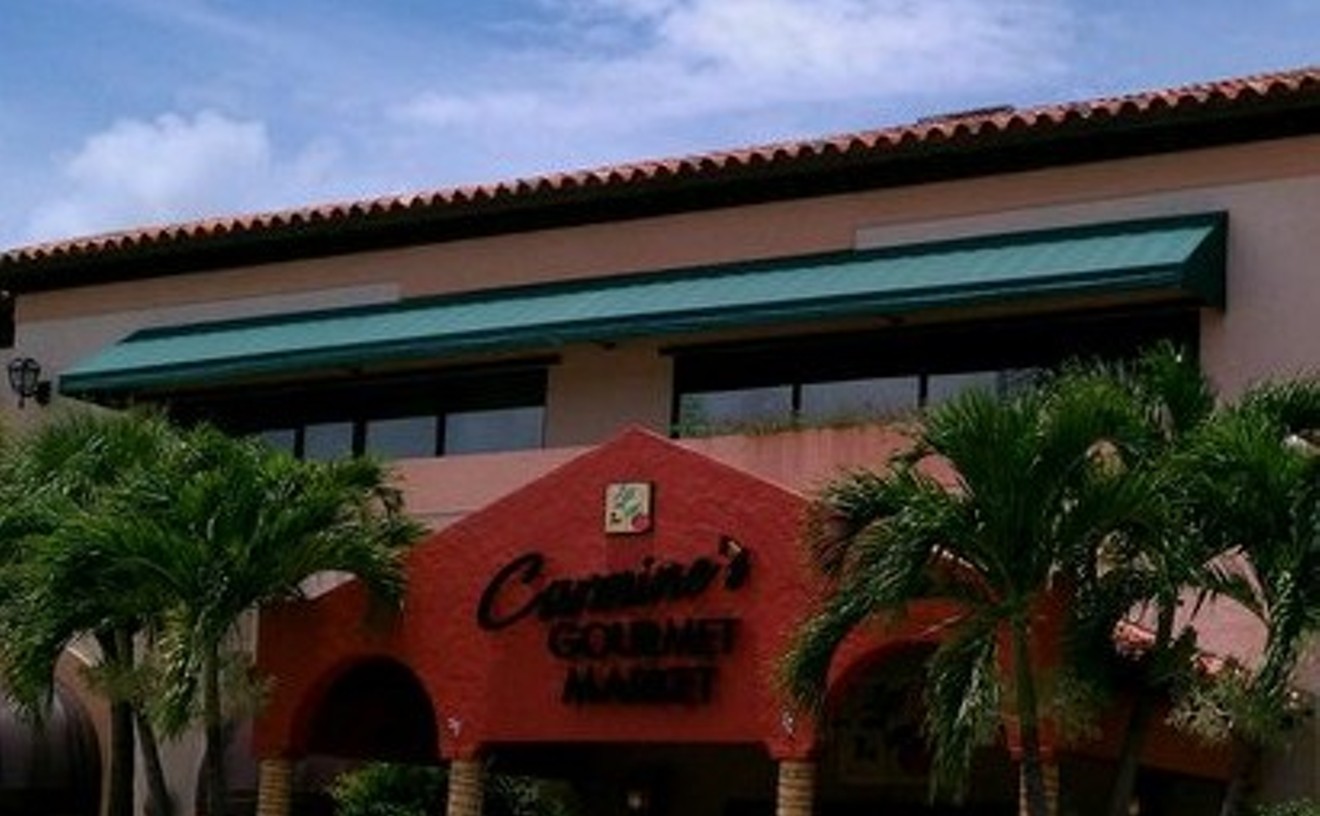 Part Zabar's, part Xanadu, this stupendous compendium of comestibles is a testament to the opulence and abundance of the American 21st-century good life. Here -- serendipitously located at the intersection of Prosperity Farms Road and PGA Boulevard -- is where your amber waves of grain, your fruited plain hit the table and the palate. Of course, the pot of food at the end of the rainbow is in a yacht harbor in a municipality that christens its main public thoroughfare after the ruling body of a ruling-class sport. Of course, the leisured white folk of the country-club set steer their SUVs this way at day's end, weary of the sun and the cart, to pick up a gourmet delicacy or two for dinner: black-and-white sesame-seared tuna, herb-crusted sea bass, rapini-and-sausage-stuffed breast of chicken, and meats Milanese, Francese, parmigiana, and piccata. There's an extensive wine selection, produce section, and bakery near at hand. It's pricey -- prepared foods top out around $19.99 per pound -- but hey, it costs to eat the dream.