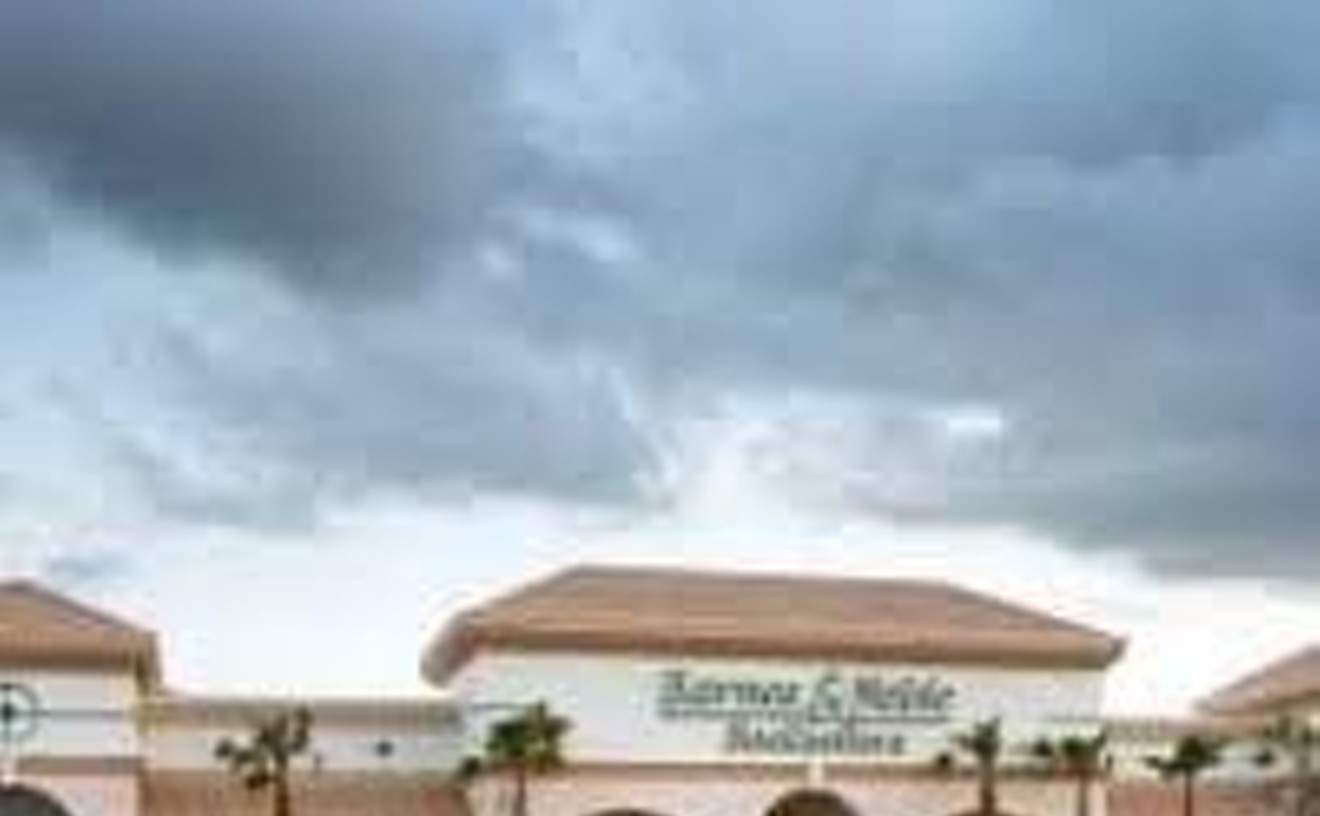 With one of the biggest book selections in Broward -- 170,000 volumes -- this massive retailer has no local equals. It's the largest, newest, and the only two-story location among the four B&N stores in the county. The place even boasts a system that allows you to listen to every CD they carry. But the reason to come here is the books. There's a large section that caters to the gay and lesbian community in nearby Wilton Manors, as well as substantial travel and children's areas. Until a big independent like Liberties Fine Books, Music and Café (which closed last year) returns, this is the place to get even the most obscure titles, friendliest service, and widest local-author selection. For a look at the latter, flip through former New Times writers' first books -- Ben Greenman's Superbad and Steve Almond's My Life in Heavy Metal. There are also the SoFla staples: Dave Barry, James Patterson, Carl Hiaasen. It's open 9 a.m. to 11 p.m. Monday through Saturday and 9 a.m. to 10 p.m. Sunday.

This is a bookstore torn from a book lover's imaginings and plopped down in the most unbookish of settings: amid a visual jumble of strip malls and shopping centers just south of the busy intersection of Oakland Park Boulevard and Federal Highway. The current vice president of the Florida Antiquarian Booksellers Association has plied his trade here since 1978 after growing out of a nearby store that he opened in 1974. It may not look like much from the outside, but open the door and it's a browser's treasure-trove -- more than 100,000 used and rare volumes are packed into a warren of narrow aisles and shelves that rise straight up to the second-story ceiling. Hittel brags he has books from 25 cents up to $14,500 (for a rare copy of Charles Dickens's serialized A Tale of Two Cities). On a recent Saturday, a financial planner stacked old books on the checkout counter, trying to get the right mix to give his office an intellectual veneer. He was puzzled by the rapt look of the other shoppers, lingering over Dog's Bark, a limpid collection of essays by Truman Capote ($20), or leafing through a wood-bound scrapbook of a family's 1941 Florida vacation ($75). For bookstore visitors, it's the outsides as well as the insides that confer the magic. And inside this place, it's easy to get lost. "I didn't know this was here," marveled a tall hipster with bobbed burgundy hair who had wandered into the store and then spent the better part of an hour hunched in the photography section.

Looking at this place, located in an innocuous strip mall on the beach side of the 17th Street Causeway, you wouldn't even know its name. But you'd definitely know its wares. Large, brightly lit signs proclaim LIQUOR and PUB LOUNGE in red letters. Inside, you'll find a good selection of high-end liquors. A bottle of Cragganmore Scotch Whisky, some of the finest money can buy, runs $40. And what's that sound coming from the back door? Why, it's a little bar attached to the rear of the store, for those impulse buyers who need their alcohol this very minute. Don't be afraid, now. Sure, this place is about as local a bar as you'll find, but the locals are friendly. From the bartenders -- one a surly man with a buzz cut and another a Johnny Cash look-alike -- to the regulars, most of whom live on boats or in houses with docks, everyone's affable once you get to know them.

Centrally located on what may be the most civilized street in the county -- the elegant, tree-lined heart of Palm Beach's north end -- this newsstand offers a selection that mirrors the elite resort island's population of international transients. The collection of dailies and newsmagazines is heavily Eurocentric, with British, German, and Italian publications more in evidence than those of U.S. origin. With magazine racks as fashion-oriented as the clientele, this is a great place to catch the glamorous in repose, faux-aristos parking their poodles at the curb while they pick up a pack of cigs and the news from back home. Join them as they read at an outdoor table at swanky Chuck & Harold's up the block. Or save a few bucks, taking in your Corriere della Sera with an ice cream cone from Sprinkles next door.

The customer-service desk at this place -- even though it's part of a giant chain -- is virtually always available to answer anything. New Times requested a book about ambient music, tapes on learning German, and Britney Spears' latest CD. The attendant returned with all three items in under a minute and, as a bonus, even mocked the Spears purchase. Clearly informed and appropriately sarcastic, the employee was also able to give on-the-spot definitions of cryptozoology and ribald. Of course, it's not part of their job to know such things, but that's just the kind of intellects you'll find here. They also know how to take a phone call and answer your question rather than make you wait. And most will follow you to a particular area in the store if you appear even slightly confused by their instructions.

Guy walks into a comic-book store with a pile of comics in his arms. It's junk, mostly, and he knows it: Late '80s and early '90s Classic X-men (reissues, not the original Byrne/Claremont ishes that are actual classics), that whole cheesy Death of Superman series, and a few of the lesser graphic novels. And this isn't just any comic-book store but the joint that has been the strip-mall-based center of Broward's comic-book, collectibles, and role-playing-game universe for more than a decade. But the guy's thinking maybe, just maybe, this heap of non-cardboard-backed, non-plastic-bagged dreck will pass muster with the übergeeks at the gate. Not bloody likely. First off, there's two of them: one big and doughy, one small and wiry, both clad in faded T-shirts referencing manga so obscure that our hero -- who grew up on Star Blazers and Battle of the Planets and discovered marijuana just in time for Akira, Vampire Hunter D, and Tank Police -- feels like a lame-ass, Dragonball-Z-come-lately fanboy. Still, he gamely proffers his unwanted comics to these paragons of anticool behind the cash register. The big one stands mute, allowing his companion the perverse pleasure of dropping the hammer. The small one shakes his head, his face a mask of contempt. "They're not taking anything after 1970," he announces. "Your best bet is probably eBay." Where all of the other lame-os peddle their weak-ass shit, he doesn't say but likely thinks. The guy slinks away, crap comics under his arm and tail between his legs, wondering when exactly it was that he became not quite a big enough loser to be welcome in this particular treehouse.

Offbeat may not be the cheapest record store to come down the 'pike. Nor is it the largest. But if you ever happen to be looking for a strange, little-known album that went out of print a decade ago, this should be the first spot you hit. The store's music collection includes not only CDs and cassettes but also LPs, 45s, eight-tracks, and even reels. Yes, reels. Remember those? If anyone still happens to own a reel-to-reel player, which looks suspiciously like a small version of an early computer, this should be the only record store for you. And if you still have an eight-track player, well, there's just not much we can do for you. When you decide to join the 21st Century, there's good news: Offbeat buys old collections. The store hours are a bit skimpy (Wednesday through Saturday, 11 a.m. to 5 p.m.; Sunday, noon to 4 p.m.; closed Monday and Tuesday), but isn't a midday trip worth it for choice vinyl?

All Books and Records

Though they're located in strip malls, thrift-store funkiness lends All Books and Records much in the way of old-school authenticity. AB&R takes the prize for one reason: volume. These stores pack a massive, unwieldy (but surprisingly well-organized) collection, including everything a disc hunter could dream of. There's an outrageous assortment of soundtracks, reggae, Latin, hip-hop, hair metal, death metal, various obscurities, and scads of old vinyl of value for true memorabilia-ists. Prices start at $2.95 and are generally half the list price. Both stores are open from 10 a.m. to 9 p.m. Monday through Saturday and noon to 7 p.m. on Sunday. Best of all, there's even that slightly musty smell only old wooden crates can emit.

Most people go to their neighborhood drugstore to get their 'scrips filled or to pick up a bottle of 'Tussin for that nasty cough. But folks who are more attuned to the spirit world go to botanicas for healing. Situated in a strip mall in southwest Fort Lauderdale, Botanica 7 Rayos offers a wide array of prayer candles, herbs, beads, statues, and some of the best Bembe music this side of the Nile. The place gets it's name from the seven deities of Santería. A "spiritual consultation" will run you $31, and -- though no catalog exists just yet -- product orders can be placed via the shop's Website. Even if you're curiously browsing, the helpful staff will answer any questions -- just be sure to tip Elegguá on the way out.

One of the more dreadful things in life is not having a baby when you're having a baby. Push after excruciating push, howls of pain, and the beautiful new little being simply won't budge. The lazy, jaded doctor utters one horrid letter: C. As in C-section. Surgery, possible complications, extreme discomfort, two or three extra days in the hospital. Nobody wants it, and you pray that something will help the baby come along. If you're lucky, someone like Audeanne Donaldson will be at your side. Sure, she's a smart and pretty nurse with 12 years' experience bringing new people into the world, but she's also as strong and determined as anybody you'll meet. She doesn't like the knife, so she uses wonderful tricks to bring forth the baby. One of her favorites is putting the husband to work. Donaldson grabs a sheet, ties a knot at the mother's end, and hands the other to the husband. Then she says, "Now I want to see a good tug of war." As the parents-to-be tug, the baby's head peeks out. Between contractions, the husband gets the feeling back in his hands. Then they pull a little harder, and the head peeks out a bit more. And pretty soon, the doctor comes in and says to the mother, "My God, I think you're going to make it." Donaldson smiles a knowing smile. And when the baby's born, the nurse shows off another skill: guessing the baby's weight. She usually hits it dead-on. Thanks, Audeanne.