The weather in South Florida is as extreme as it is unpredictable. Some days, it seems as hot as the surface of Venus. Other days, it's raining so hard that you'd think the ground would never lose its thirst. That spells trouble for local athletes. But there's a solution: Sports Mall. This 75,000-square-foot indoor sports complex in Deerfield Beach offers soccer and roller hockey leagues for children and adults. Adult leagues also include basketball, with young whippersnappers and players old enough to be their grandparents. But Sports Mall offers more than competition. It's also a damned fine place to grab a drink. Set in an island between the soccer and hockey fields is a bar serving beer and sports drinks. If you're not the athletic type, buy yourself a draft and have a seat next to one of the fields. You might be lucky enough to watch a face pancaked against plexiglass inches from your beer.

Marlins fans will spend the season bartering with scalpers to sit in the upper levels of what's really a football stadium. But fans further north know real baseball: Roger Dean Stadium. Here, all 7,000 seats are close enough to catch a foul ball, and the only scalpers will sell you tickets for less than the price of a hot dog. There are two home teams, the Palm Beach Cardinals, a farm team for St. Louis; and the Jupiter Hammerheads, a minor-league team connected to the Marlins. Tickets to the minor-league games are just $7 (not much more than a Bud from Pro Player Stadium), and season tickets run from just $100 to $300. The best seats in the house are straight down the first-base line, where fans can spread a blanket across a tiny grassy hill behind where the pitchers warm up. Big-league players often make rehab trips to Jupiter, so this is where, when A.J. Burnett gets injured again, you can tell him what a bum he is.

Best Place to Cool Off 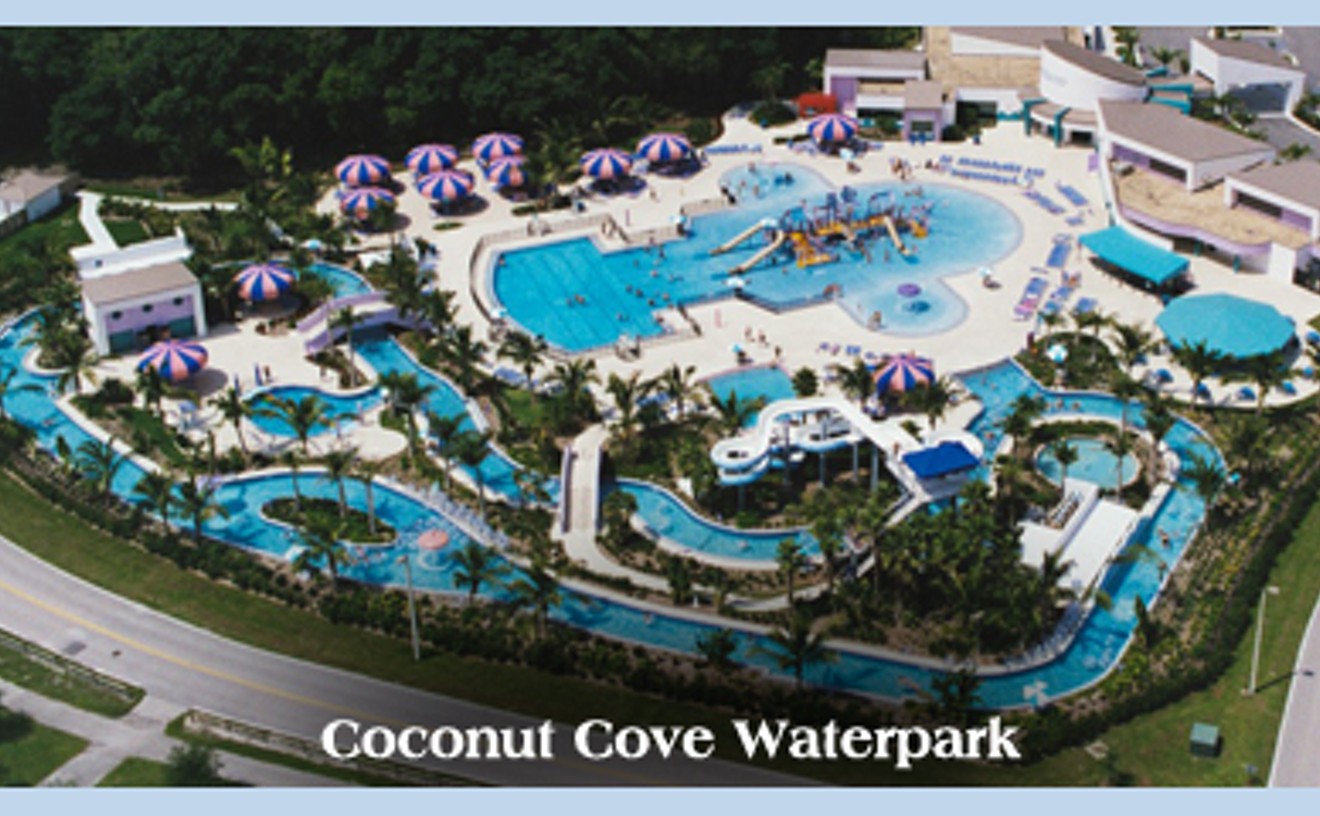 If this were New England, we'd be touting the "Best Place to Keep Warm." But it's South Florida, where trying to stay cool is the name of the game nearly year-round. And there are scores of people down here, all looking for the same relief. Many head for the beach. Just as many, it seems, head for the Rapids Water Park in West Palm Beach. But what's the fun of waiting in line ten minutes for 30 seconds on a waterslide? Especially after you've made yourself at least $26 poorer just getting into the damned place (stupid private parks). At least Palm Beach County's Coconut Cove Water Park doesn't charge $5 just for parking; parking's free, and admission is only $9.25 for adults, $7.25 for children ages 3 to 11, $3 for toddlers, and free for infants. With a 986-foot river ride, a sea monster walk lagoon, two 220-foot waterslides, and a children's water playground, Coconut Cove proves you can beat the heat without having to fight the crowd.

Rocks? In South Florida? Yep. Only 30 miles from downtown West Palm is the only outcropping along the southern Atlantic Coast, in fact. When big-ass waves break along the base of these massive chunks of Anastacia limestone, the salty spray is channeled up through narrow holes leading to the surface. During the highest tides and especially after rough winter weather, the plumes can reach heights of 40 feet or more, hence the park's name. The resultant display is seen by few, especially on weekdays, when visitors may just find large stretches of the ritzy, remote beach all to themselves. The tranquil nooks behind the monolithic stones are home to tidal pools and shells for scavengers and beachcombers. This wild, untamed, and no-frills nature sanctuary (open 9 a.m. to 4:30 p.m. daily, $3 entry, $37 for annual passes) contains one of the most rugged -- and certainly unique -- beaches in the entire state.

It's a grueling, five-mile hike to the desolate Scrub Jay campsite deep within Jonathan Dickinson State Park, especially when hauling camping gear, but it's well worth your aching back. The campsite is hidden in the sandy uplands, among a sprawling field dotted with slash pines and filled with saw palmetto bushes. Unlike most state park campsites, mashed together like suburban ranch homes, the Scrub Jay sits all alone in this 11,500-acre park. It's big enough for eight campers, and your only neighbors will be the bobcats, eagles, and osprey. During the dry season, the site is far enough away from the Loxahatchee River and its swampy mosquito breeding grounds. The view isn't Grand Canyon-worthy, but the simplicity of the star-filled sky and wide-open prairies, just ten miles from Interstate 95 insanity, makes you realize what drew early settlers to Florida's wilds. The park charges a measly $4 for the site, but call ahead, as this site is well-known to adventurous campers. Unless you plan to boil your own urine, which isn't recommended unless mixed with two parts vodka and one part grenadine, bring iodine tablets for the untreated well water. The park requires campers to begin the journey at least three hours before sunset, but give yourself more time if you don't have a sherpa to carry in the beer.

Sure, lights are important, and this place has 'em. And a perfect surface is a must. Of course, Jefferson Street's are smooth as an air hockey table. And to be in the middle of a neighborhood so you can walk there is vital, as are a couple of practice walls. Yup, they're there, as well as swing sets and a variety of other sly ways to distract the kids while you hone that cannonball serve. But what makes the courts at Jefferson Street really something is a Peruvian expatriate named Max Aracadier, who gives lessons there. The 25-year-old, who arrived three years ago, has students who range in age from 4.5 to 70. His prices are reasonable at $10 to $15 a shot. And he's the nicest, most patient guy you could imagine. "I just love the sport," he says. 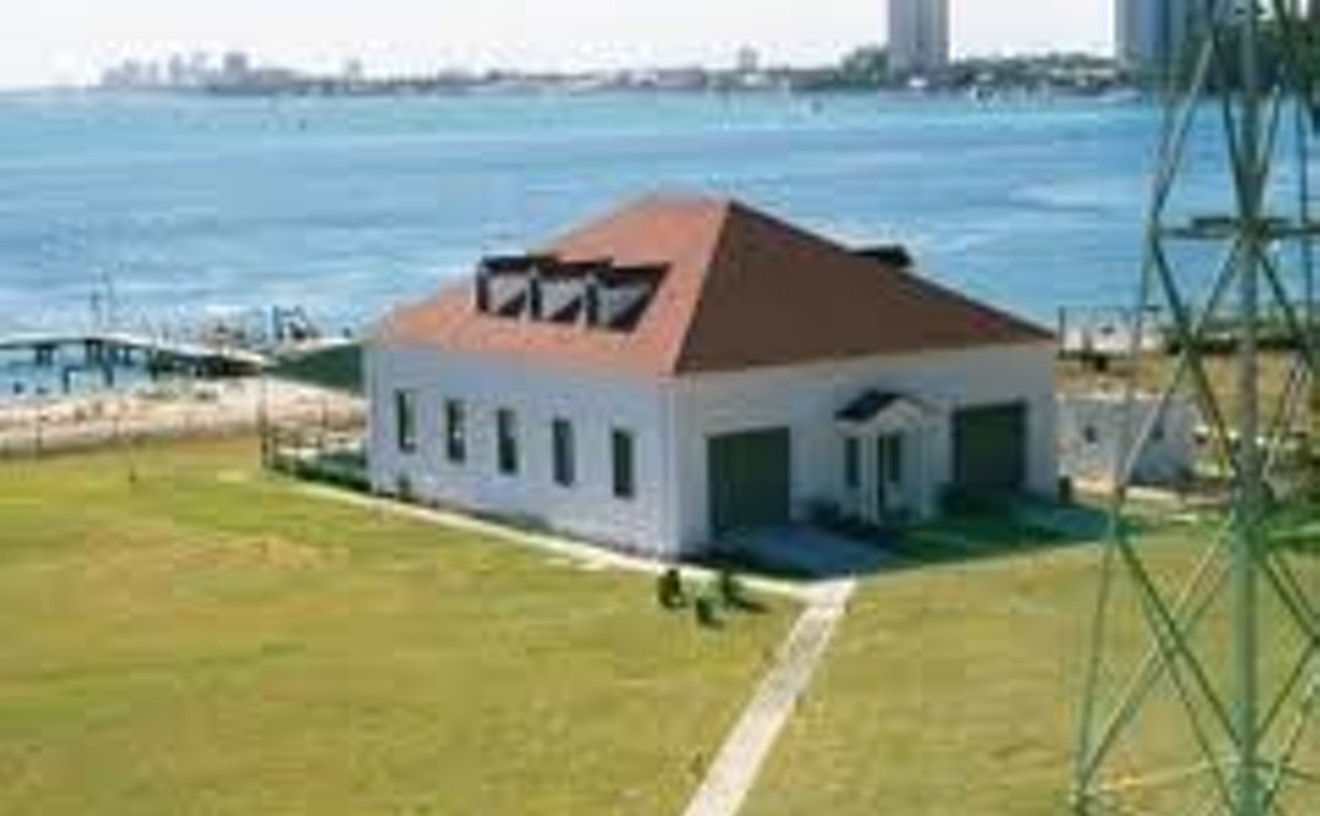 Take Flagler Drive north through downtown West Palm Beach, past the Northwood neighborhood mansions facing the Intracoastal Waterway, and you'll find three tennis courts with a stunning view. Currie Park's hard courts sit just a lob away from the water, with a view of Palm Beach mansions across the way. The 11-acre park is more known for its five boat ramps, maritime museum, and Martin Luther King Jr. memorial, so the courts sit largely unoccupied. Unlike stretches of the Intracoastal further north, crowded by boats coming to the Port of Palm Beach, you're more likely to see pelicans diving the water here. The few people who've discovered the courts play as massive yachts pass on the smooth stretch of Intracoastal to their Palm Beach homes. While the wind off the water might play havoc with a few backhands, it makes for great air conditioning during a summertime match. While there, dedicate a game to the park's namesake, George Graham Currie, who is so honored after spending 1901-04 as West Palm's mayor. After all, he got his name on a set of tennis courts with one hell of a view.

What he's done for us lately: He recently opened Olliewood Skate Park in Hollywood, parlaying his international rep as a skateboarder into a business. This is no ordinary glide jockey. Gelfand is one of the originators of the sport, the inventor 30 years ago of a technique that has become known worldwide as "the ollie." The Oxford English Dictionary recently included ollie -- "a jump executed by pressing the foot down on the tail of the board to rebound the deck off the ground" -- in its OED Online.

What it takes: "A lot of drive. I'm a little bit hyper. Creative people think different from everybody else. When I was little, I wasn't into team sports. I made rules for myself. That's what puts you ahead of the crowd."

Face it, the Panthers aren't looking all that good this year. Most days, their defense is porous, and if they send a puck or two to the back of the net, then it's been a good night. This is why goalie Roberto Luongo is -- without a doubt -- the team's most valuable player. Luongo joined the Panthers in the same trade that netted the team last year's winner, Olli Jokinen. But while Jokinen has had a so-so season, Luongo has been providing stellar performances between the posts night in and night out. If you have any doubts, just check the statistics: Luongo led the league in saves during the regular season with an astonishing 495 more than the number-two goalie. The Panthers scored barely two goals a game this season, yet 17 of the team's wins came with a one-goal margin. Luongo has clearly gained the respect of the rest of the league, as he was chosen by coaches as the Panthers' only delegate to the Eastern All Stars, and his name has been mentioned as a contender for both the Vezina (Best Goaltender) and Hart Memorial (league MVP) trophies. The Panthers' own acrobatic brick wall broke the record for most shutouts by a goalie under the age of 25 two-thirds of the way through the season and should look forward to a long career, hopefully here in South Florida.

The most exciting rookie ever to play for the Miami Heat couldn't get a mention on ESPN if he played with his head on fire. The Big National Media is so fixated on the LeBron and Carmelo hype that it's pretty much missed the emergence of Dwyane Wade, who could become better than both of them. Seriously. Sure, LeBron is LeBrilliant and Carmelo is as delicious a player as his name connotes, and yes, both of them are younger and taller than Little D, but Wade is blessed with something even more special: crazy quickness. He's arguably the quickest player to enter the NBA since Allen Iverson, and he arrived with enough hops to make a truckload of Budweiser. Unlike the Answer, he possesses a very strong body that, after slashing to the paint, can battle the trees underneath. Or so it would seem. Dwyane's been wading -- damn near drowning, really -- in injuries. Therein lies the rub -- at least the one coming from Heat trainers. Wade's incredible effort on the court has brutalized the former Marquette star, causing him to miss nearly a third of the season. But if he can keep healthy, get used to seeing Wade at American Airlines Arena -- and on ESPN highlight reels -- for a lot of years to come.