The world seems to get scarier and more desperate every day. Guns are marketed to toddlers, CEOs now make on average more than 350 times what the average worker earns, and the concentration of carbon dioxide in the Earth's atmosphere topped the apocalyptic 400 parts per million this year. Yikes! Makes you want to gobble down a tub of vegan ice cream while watching reruns of Bob Ross' The Joy of Painting. (After all, those might be the only unsullied landscapes you'll see in a couple of centuries.) But you won't catch author, artist, and lifelong Broward County activist Stephanie McMillan sulking in a vat of Häagen-Dazs. Instead, when McMillan's not penning award-winning political cartoons and polemics, she's brainstorming better protest and resistance strategies as part of South Florida anti-capitalist/anti-imperialist group One Struggle, speaking on panels like "Comics and Social Change" at conventions, writing essays, and standing up to authority whenever the struggle calls. Howard Zinn described her work, a collage of essays, cartoons, and reporting from the Occupy movement titled The Beginning of the American Fall, as "social satire at its wittiest and most engaging." That book eventually went on to win the Robert F. Kennedy Center for Justice and Human Rights Journalism Award in 2012. Maybe your heart doesn't pump revolutionary blood yet, but check out her work and it will.

Florida, also known as Floriduh and Floriderp, doesn't exactly have a reputation for stand-up citizenry. We elect fraudsters like Rick Scott and find bizarre entertainment value in Filomena Tobias, the Palm Beach woman who became an internet sensation when she flipped off Chicago Bulls player Joakim Noah at a Heat game — but was accused by her internet psychic in 2008 of murdering her hedge-fund husband. There's Jack Abramoff's link to unexplained deaths and explained bank fraud, and Ann Coulter and Rush Limbaugh live here. They're all part of our nutty cultural landscape, and if something weird happens in the rest of the country, you can bet there's some link to our Sunshine State. (On the positive side, we've got some great orange juice. Woo!) So when people like Aaron Jackson, founder of the South Florida-based nonprofit Planting Peace, come along, we almost dismiss. Not only did he live a life of asceticism, selling all his possessions and sleeping on the floor of a homeless shelter during the mid-aughts, to found orphanages in Haiti; he also led a major effort to clean up oil after the BP spill and has expanded Planting Peace's outreach to India, where 11 million children live on the street. Alas, he recently moved to Kansas, where he bought a house directly across the street from the Westboro Baptist "I hate fags" Church, painted it bright rainbow colors, and christened it Equality House. It'll be a resource center for LGBTQ-rights activists and antibullying campaigns, and Jackson will live there to promote a hopeful symbol of love against the church's message of hate. For that, we say he's at least as good as Florida orange juice. 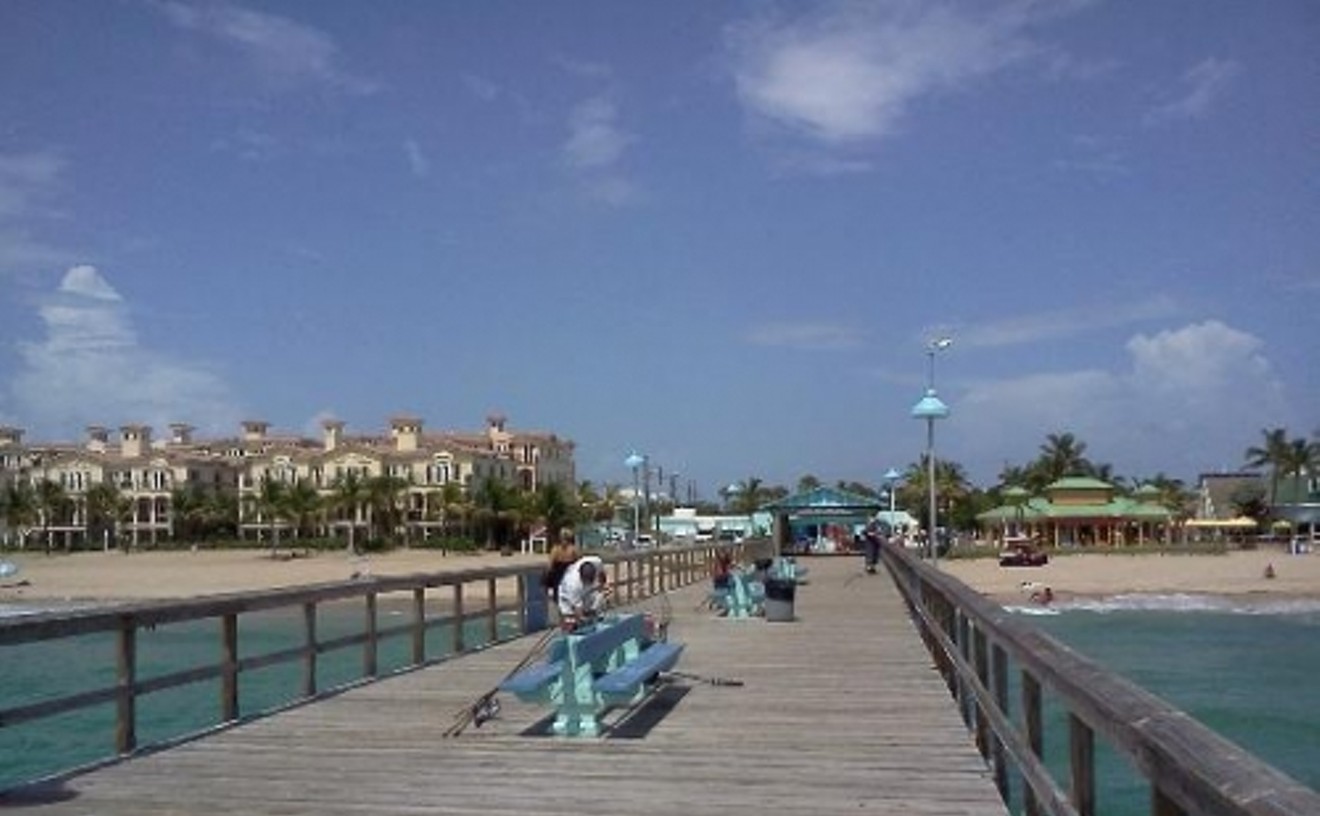 Wellbutrin, Adderall, Zoloft... You name the prescription drug, teenagers are on it. And no wonder. Sitting inside ice-cold classrooms, stressing over the FCAT, and eating limp Tater Tots when the Fort Lauderdale sun is outside beckoning can be depressing as hell. Maybe we'd be less of a Prozac nation if we self-declared a mental health day once in a while. The sand around Commercial Pier has long been a staple for Broward County kids ditching the books to catch some sun. The pier itself, which divides the beach into the more-touristy north side and more-private, local-friendly south side, offers a couple of bonuses too. It provides shade and a bit of privacy for those who sit under it (usually the smokers) and a small adrenaline rush for those brave enough to jump off it. Hungry truants know to stay far away from the pier and restaurants within cops' view. Instead, the neighborhood kids prepare by hitting up LaSpada's Original Hoagies while en route to the beach; it sits a couple of blocks west on Commercial Boulevard. It's this trifecta of sun, pals, and good food that makes Commercial Pier the ideal spot to cut class. School is for rainy days, right? 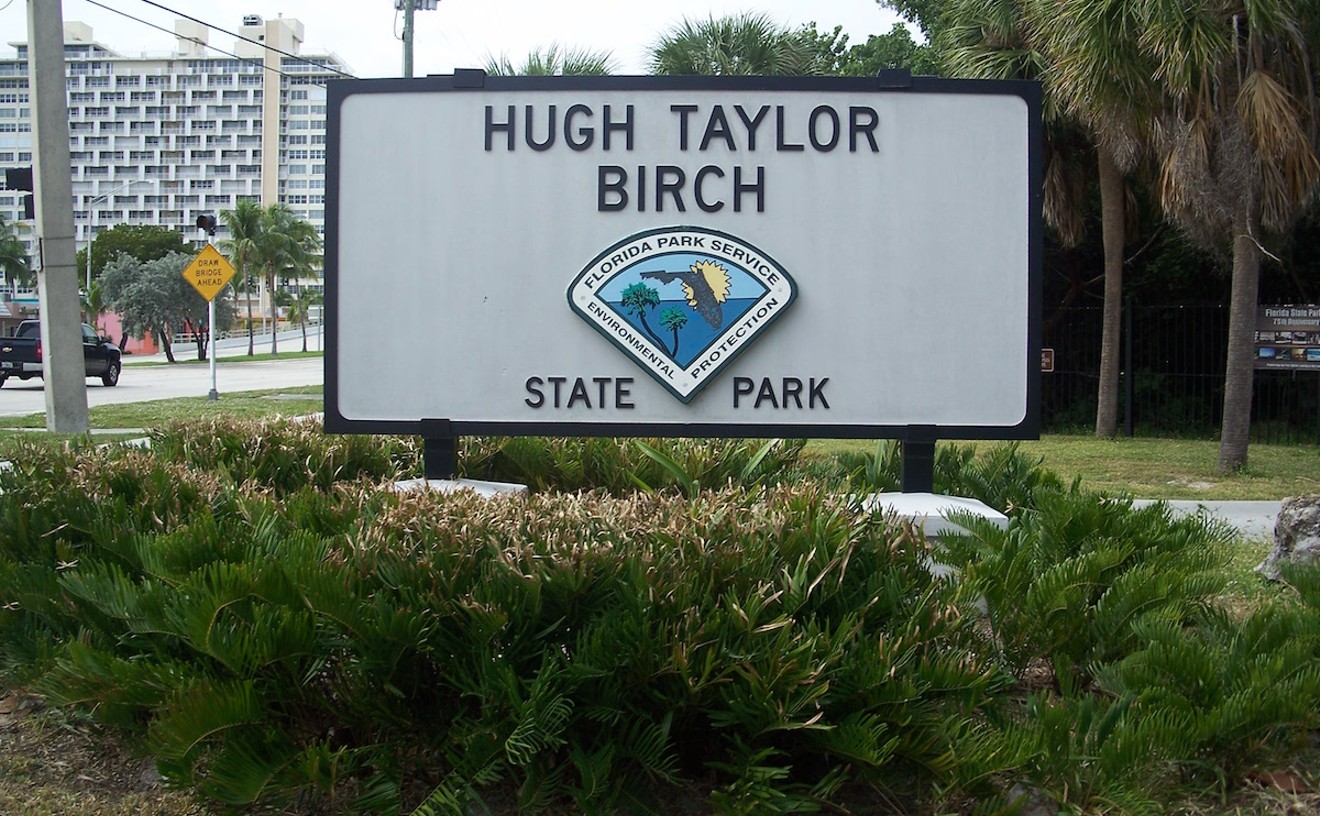 We should all go to Birch State Park much more often. It shows us what this chunk of Florida looked like before we messed it up with the drainage and concrete and sprawl. The park is green, brown, beautiful, overpoweringly fragrant, and a little too wet for comfortable human habitation. And in the park's lagoon, accessible via rented canoe ($5.30 an hour), there is a lonesome little island where nobody ever goes, a few hundred yards past the nearest walking trail, just beyond the abandoned railway bridge. It is a place for a picnic and for languor, and if you have no hatred of humidity but a deep love of water, soft soil, and sun-dapple, it is the most romantic place in Broward County. Propose there.

Best Place to Break Up

Did he leave the seat up one too many times? Did she come home with a new pearl necklace? When you were scanning every memory sector on your iPhone with a forensics image-and-text-retrieval app, did you stumble upon those tickets he bought to Vegas? With your boss?! (Stored in his phone as "my little Bumpkin"!) Breaking up is not the hardest thing to do when you live in the nexus of the Everglades, the Bermuda Triangle, and the Atlantic Ocean. You could invite her on a romantic airboat ride. ("Just the two of us, honey; something exciting! Why am I bringing the chainsaw? You know I've always wanted to carve ice sculptures in the swamp at 3 a.m. during a new moon!") Or double the life insurance payouts and charter a small boat to Bermuda. ("Don't fret over the hurricane, sweetie; they never hit us.") Or resist the Dexter-esque inclinations and just opt for a nice swim in the Atlantic. Wearing only a swimsuit, there's nowhere for her to hide weapons or recording devices with which to retaliate; surely there will be some hot lifeguard or half-naked eye candy to greet you on the beach when you turn your back and walk away (forever!), and for the dumpee, everyone will think those tears are just droplets of saltwater. You're a gentleman; be charitable to the bitch.

The first rule of politics is: Do not take nude pictures of yourself while in an elected office and share them with your convict relatives whom you are sleeping with, then leave them lying around where someone could find them and blackmail you out of office. Although incest, pornography, blackmail, and felon relatives go together like peanut butter and chocolate, for Boynton Beach Commissioner Marlene Ross, it didn't make for a good public relations mission. Ross admits sending the photos to her cousin Rogelio Vera and succumbing to his sexual advances for several months but said that she was bullied to change her votes by "sinister" former commissioner turned lobbyist David Katz for years and that the exposition of her affair was a personal vendetta for political ends. Ross resigned in December 2012. No word whether she and her cousin have been able to patch things up.

Cassadee Pope's first solo release was a slowed-down, dramatic cover of a song made famous by Natalie Imbruglia. The West Palm Beach siren sings "Torn" like hers is a damaged teenaged heart sashaying into a breakup. Not long after the song hit the web, Pope ended up on season three of The Voice. 'Round these parts, we remember her Wellington High School band Blake and the pop-punk group she fronted, Hey Monday. But Pope's pipes took a turn to the west after she was coached under the keen guidance of country superstar Blake Shelton. "Over You," which she sang on the show, ended up bitch-slapping "Gangnam Style" out of the number-one place on the iTunes charts. Pope is now a rising star, signed to Republic Nashville, a Big Machine Records imprint, and dating All Time Low's drummer. If there were one local voice we have confidence will rise above the rest, it's this local girl gone good, and gone country.

South Florida's Scott Prouty became a major influence in the 2012 presidential elections while on the clock bartending during a Republican Party fundraiser last year in Boca Raton. He captured Republican candidate Mitt Romney disparaging 47 percent of Americans as people who are "dependent on the government" and "believe they are victims." Admirably, Prouty did not seek profit from revealing his recording. "The guy was running for the presidency, and these were his core beliefs. And I think everybody can judge whether that's appropriate or not or whether they believe the same way he does," he told MSNBC. "I felt an obligation to expose the things he was saying." In doing so, he may have changed the course of history.

Venus the Amazing Chimera Cat — yes, that's her name — is a striking feline whose face is half-black and half-orange, split right down the middle like a black-and-white cookie. Her eyes are likewise mixed — she's got one blue and one green. One day, a friend of a friend of Venus' owner posted the kitty's picture on Reddit, and it received more than 1 million clicks in less than 24 hours. Soon, a Facebook page was established and garnered more than 100,000 likes; next thing, the cat was making the rounds at Good Morning America and the Today Show. Now, her owner (who goes only by Christina to ward off crazed fans) is cashing in on Venus' devilishly beautiful visage, having followed in the footsteps of Boo the World's Cutest Pomeranian Dog, and struck a deal with stuffed-animal-maker Gund. Although in pictures, Venus sometimes comes off as tough with diamond bling on her collar and a show-off-her-tail attitude, Christina insists she's just another misunderstood supermodel. "She's rather shy; she doesn't do tricks." Look for the toy on store shelves by Christmas.

Best Place To Come Out to Your Parents

There are no really good places to come out of the closet. Even if you were raised by lesbians — even if your adolescence was spent in the company of geeks and thespians, and even if you spent the first three years of high school going to the GSA "to support your friends" — even if you've fooled nobody at all with your straight schtick, ever, and you kind of know it, coming out will be a little awk, if only because it's always awk to speak to your parents in even a roundabout way about what you like to do with your naughty bits. So do it at home. (Unless your parents are religious fundamentalists, in which case you should come out someplace with a heavy police presence and multiple opportunities for quick egress. Fort Lauderdale airport will do. Tell them just before you slip through security, a single angry digit raised in their pug-ugly faces, and fly away to freedom.)