This location has been flagged as "Closed". 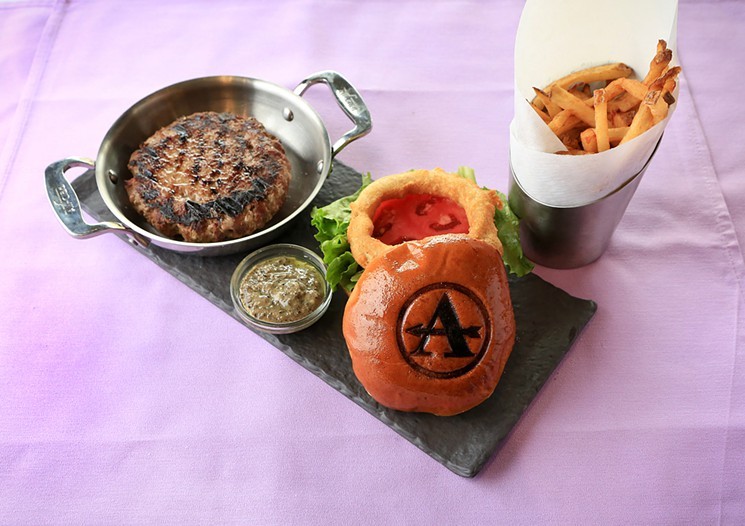 If you order the Million Dollar Burger at Adena Grill & Wine Bar, the swanky steak house located in the Village at Gulfstream Park in Hallandale Beach, you won't have to run out on the tab after dinner. Instead, the name of this burger is a reference to the amount of money Adena Foods founder Frank Stronach has invested to create Adena Meats, which supplies the fancy new steak house with all its beef, chicken, and pork. Far ahead of the health-crazed, organic, and GMO-free frenzy, Stronach — founder of auto parts giant Magna International and owner of Gulfstream Park — wanted to raise cattle without the conventional cocktail of hormones, processed grain feed, and antibiotics. Today, the ranch supplies only his restaurants. The menu highlights both seafood and meat, specialty cuts that include a bone-in cowboy steak, rib eye, New York Strip, and prime rib. The petit filet is a hearty cube of meat, seasoned with nothing more than a sprinkling of pink Himalayan sea salt and pepper. It can be ordered with one of several sides, including a heavenly celeriac purée — Stronach's favorite — a healthier option than mashed potatoes. The aforementioned burger arrives disassembled, giving the diner a chance to appreciate each meticulously prepared component. The nine-ounce patty is the size of the small steel pan it's served in, proudly bearing the geometric pattern imparted from the grill. The accompanying brioche bun is placed just so alongside it, the shiny top similarly branded, this time with "A" for Adena. It would be a crime to leave out the house-made Dijon truffle mustard, made daily with imported black truffles, whole-grain mustard, shallots, and sherry vinegar. Sure, it won't cost you $1 million, but Adena aims to make it well worth the $24 price tag.Read our full review.