Mickey Hart (far left) joined the Dead in 1967 and played with them until they disbanded in 1995, after the death of Jerry Garcia. Photo courtesy of Wentworth Gallery
For Grateful Dead drummer Mickey Hart, creating art is akin to a religious experience.

“It’s a spirit-world thing,” Hart says. “It would be like you going to church – that’s how I approach art.”

Musicians dabbling in art is nothing new. Renown performers from Ron Wood and Cat Stevens to the late David Bowie and Janis Joplin have made their marks on the art world.

But few, if any, have produced art so spectacular it could rival their music.

While it’s not easy to parallel the musical genius of the three-time Grammy-winning, Rock & Roll Hall of Fame drummer, Hart’s artwork and the way he creates it come close. 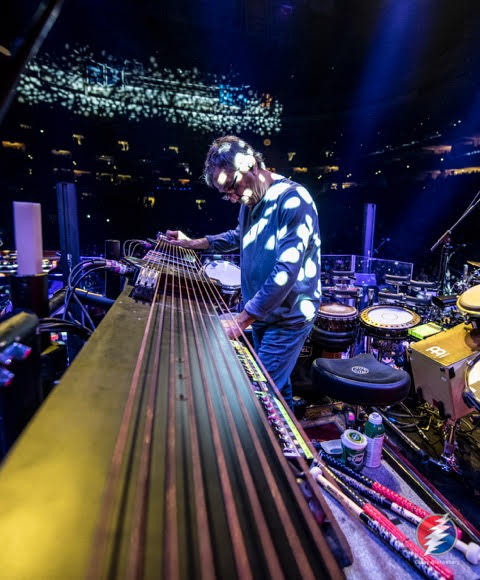 Hart plucks a 12-stringed Pythagorean monochord. The sound vibrations cause the paint to spread across the canvas.
Photo courtesy of Wentworth Gallery
“Sometimes I can see the color of a note — the interconnecting senses of sight, hearing, taste,” he says. “The paintings are full of rhythm — they have rivers, mountains, animals, people, ghosts... kind of a visual storyboard with no endings and no beginnings.”

Out there? Maybe. But that’s what makes Hart, and his artistry, so extraordinary.

“They are dense,” he says of his paintings. “There is a lot of detail. You can just stare at them for hours.”

You actually can stare at them for hours at one of two upcoming exhibits in advance of Hart’s solo exhibition opening in March 2020 at the Coral Springs Museum of Art.

Hart will unveil his 2019 collection in person Friday, November 22 at the Wentworth Gallery at the Seminole Hard Rock Hotel & Casino and follow with a showing Saturday, November 23 at Town Center in Boca Raton.

His paintings, Hart says, are not simply inspired by music; they are physical manifestations of sound and rhythm.

“I drum it into existence on the bottom of the paintings,” Hart says about using reverberations to materially influence how colors flow across the canvas. “I will be drumming them or vibrating them until certain paints come up through other paints.”

Here’s how it works: Acrylics, oils, or gouache are customized with additives to construct an endless palate of hues that might be sparkly, dull, or whatever inspires him in the moment.

He straps a framed canvas to a robot he designed, named Rainbow, which can swivel at almost any angle and speed imaginable. He then dollops paint onto the canvas while pivoting Rainbow and tapping “her” frame.

“Sometimes I’ll pour really fast where the paint moves really quickly,” he says. “Other times, I’ll slow it up to a waltz.”

Another undulation affecting the flow of paint comes from plucking a 12-stringed instrument called a Pythagorean monochord.

Originally developed in 500 BCE to illustrate the mathematical properties of pitch, the instrument is several feet long and can be played in any key.

“He figured out the whole composition of the universe using only one string,” Hart says about the scientist who created it. “Sometimes I’ll put a speaker beneath my paintings, and I’ll vibrate them at certain frequencies. I can vibrate them at gamma wave frequencies similar to brain waves and it moves paint.”

The finished pieces are dynamic — rich in color and movement. Beyond simply being visually enticing, they are meant to be experienced — to be perceived on a metaphysical level.

Particularly if you are on mushrooms. Or stoned. 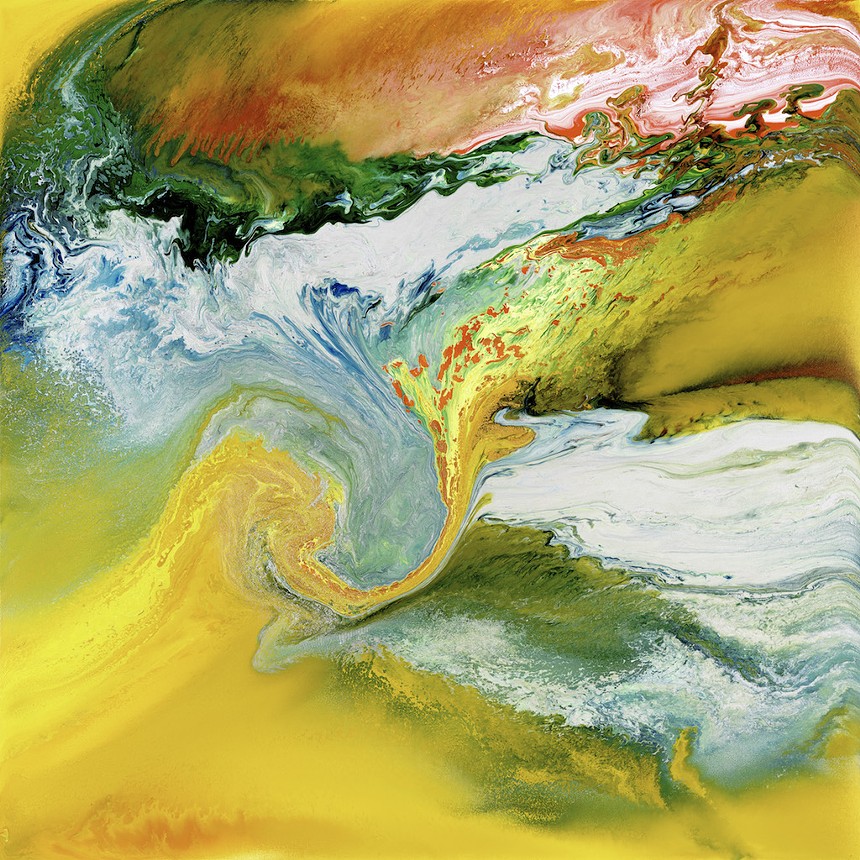 Hart says rhythm, colors, being in the "now" enable him to create masterpieces on the one-of-a-kind robot he's created named Rainbow.
Photo courtesy of Wentworth Gallery
“It moves places in your mind that accentuate, elongate, truncate — it’s different visually,” Hart says about the effects of partaking in cannabis or magic fungi before beginning a piece. “It makes you feel different, so you paint for different reasons... a little deeper, more spiritual.”

Hart, currently on tour with Dead & Company, says expanding his mind with drugs influences his artistic creativity the same way it affects his conception of melodies.

“Sometimes a band can reach those levels, like the Grateful Dead or Dead & Company, and sometimes not,” he says of the collective consciousness required for a band to cultivate music that transcends sound. “But when you get to that place, that strengthens your will because you’ve found the now — you’re in the moment — not in the past, not in the future, but in the now.”

The now, Hart says, is where one finds power. It’s the place he feels most potent and where his soul conflates with color, noise, and motion to create inimitable masterpieces with Rainbow.

“Maybe someday there will be other Rainbow’s out there, so she can meet other ones, but as far as I know she’s single,” he says, laughing, about the one-of-a-kind robot he constructed. “But she doesn’t tell me everything.”

7 to 9 p.m. Saturday, November 23, at Wentworth Gallery, 6000 Glades Rd., Suite 1089, Boca Raton; 561-338-0804; wentworthgallery.com.
KEEP NEW TIMES BROWARD-PALM BEACH FREE... Since we started New Times Broward-Palm Beach, it has been defined as the free, independent voice of South Florida, and we'd like to keep it that way. With local media under siege, it's more important than ever for us to rally support behind funding our local journalism. You can help by participating in our "I Support" program, allowing us to keep offering readers access to our incisive coverage of local news, food and culture with no paywalls.
Make a one-time donation today for as little as $1.