"Dancing Bliss," by Joni Younkins-Herzog Screenshot via @TamarcTalk/Twitter
At the City of Tamarac's second commission meeting of the year, the mayor and four commissioners discussed a number of pressing municipal matters, including the pension board for firefighters and a new wastewater agreement. But the most heated issue on the January 26 agenda was about a proposed sculpture.

"When we looked at it, it was very clear. We all said it looked like a woman's butt with legs coming out," Commissioner Debra Placko told her colleagues on the dais, referring to Dancing Bliss, a nearly eight-foot-tall steel sculpture of 12 legs arranged in a spiral reminiscent of the cancan or the Radio City Rockettes. "I appreciate art, but we have young children and this is not at all acceptable."

The five-member body had been tasked with selecting new sculptures to be installed at various points along Inspiration Way, a public art exhibition with rotating pieces displayed along a roughly mile-long stretch of Nob Hill Road between Commercial Boulevard and McNab Road in northwest Broward County. The commission typically opts for large geometric and abstract pieces, such as Robert Coons' undulating aluminum work, Stalemate, and Hanna Jubran's colorful stainless steel sphere, Superstar. The city pays the artists a stipend and then lists the work for sale as it's displayed along the busy thoroughfare. When a piece is sold, a 25 percent cut goes to Tamarac's Public Art Fund.

About 90 minutes into the January 26 meeting, art consultant Beth Ravitz clicked through a PowerPoint presentation of a dozen artworks proposed by the city's volunteer Public Art Committee to be installed on February 14. They include a perched flamingo, a colorful mosaic sea turtle, and an amorphous silver figurine extending upward.

The pearl-clutching, first reported by local news blog Tamarac Talk, began when Ravitz landed on Dancing Bliss, which was slated for installation outside the Tamarac Public Works Department.

"It shows women's body parts," Placko piped up, adding, "I do not want to see this anywhere."

Ravitz tried to assure the commission that Dancing Bliss was not a woman's butt, but rather "a series of legs that are dancing."

"And what are the legs attached to?" Placko responded. She then shared feedback she'd received from a pastor at Community Christian Church, located half a mile away, saying he told her he didn't want the sculpture "near my church."

Placko did not respond to New Times' requests for comment by phone and email, so it remains unclear precisely how and where she and the Community Christian Church pastor discern "a butt" in Dancing Bliss. 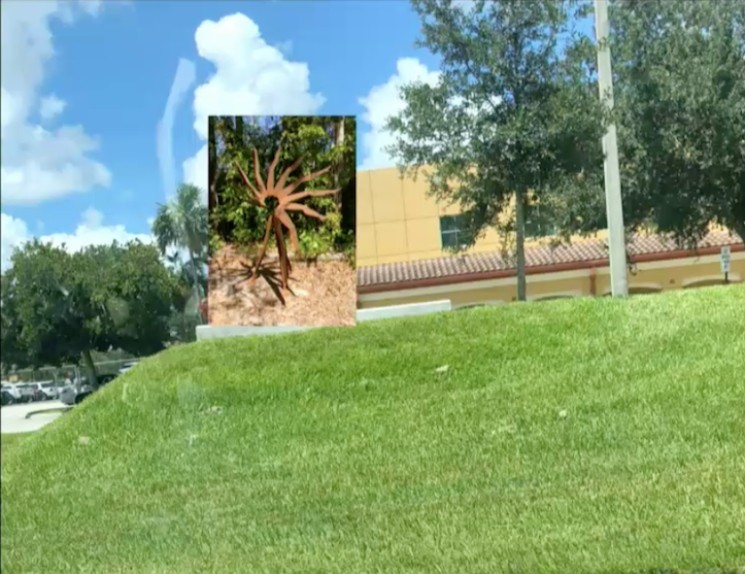 A rendering of the sculpture Dancing Bliss outside the Tamarac Public Works building.
Screenshot via City of Tamarac
Artist Joni Younkins-Herzog, who is based in Athens, Georgia, tells New Times that her work often embodies the ideas of "feminine mystique" and "blurring the lines between reality and fantasy." She had previously displayed a more abstract stainless-steel sculpture, titled Delilah, on Inspiration Way.

"Public art is 'art for all,' not just art aesthetes and academics," Younkins-Herzog says. "Therefore, I have run into this situation before. As I learn about a venue's conservative audience, I generally submit more abstract works."

As seen in archived video footage of the meeting, the commission hemmed and hawed for at least 30 minutes over the fate of the sculpture. At one point, Ravitz proposed positioning the piece in such a way that it would not be visible to vehicular traffic. But Mayor Michelle Gomez wouldn't go for it, explaining that city employees entering and exiting the Public Works building would still be subjected to the ostensible rear view.

"Whatever you decide is what we will do," Ravitz said, conceding that the art committee is only a recommending body and doesn't have voting power.

Ultimately, commissioners greenlighted the installation of 11 of the 12 proposed exhibits, giving a thumbs-down to Dancing Bliss. The art committee was tasked with finding a more suitable replacement.

Younkins-Herzog says there's no bad blood between her and the city, and that she's working on a more abstract piece to be considered for Inspiration Way.

"I prefer not to be angry or feel censored," she says. "An upset public can negate funding for future opportunities in public art."
KEEP NEW TIMES BROWARD-PALM BEACH FREE... Since we started New Times Broward-Palm Beach, it has been defined as the free, independent voice of South Florida, and we'd like to keep it that way. With local media under siege, it's more important than ever for us to rally support behind funding our local journalism. You can help by participating in our "I Support" program, allowing us to keep offering readers access to our incisive coverage of local news, food and culture with no paywalls.
Make a one-time donation today for as little as $1.