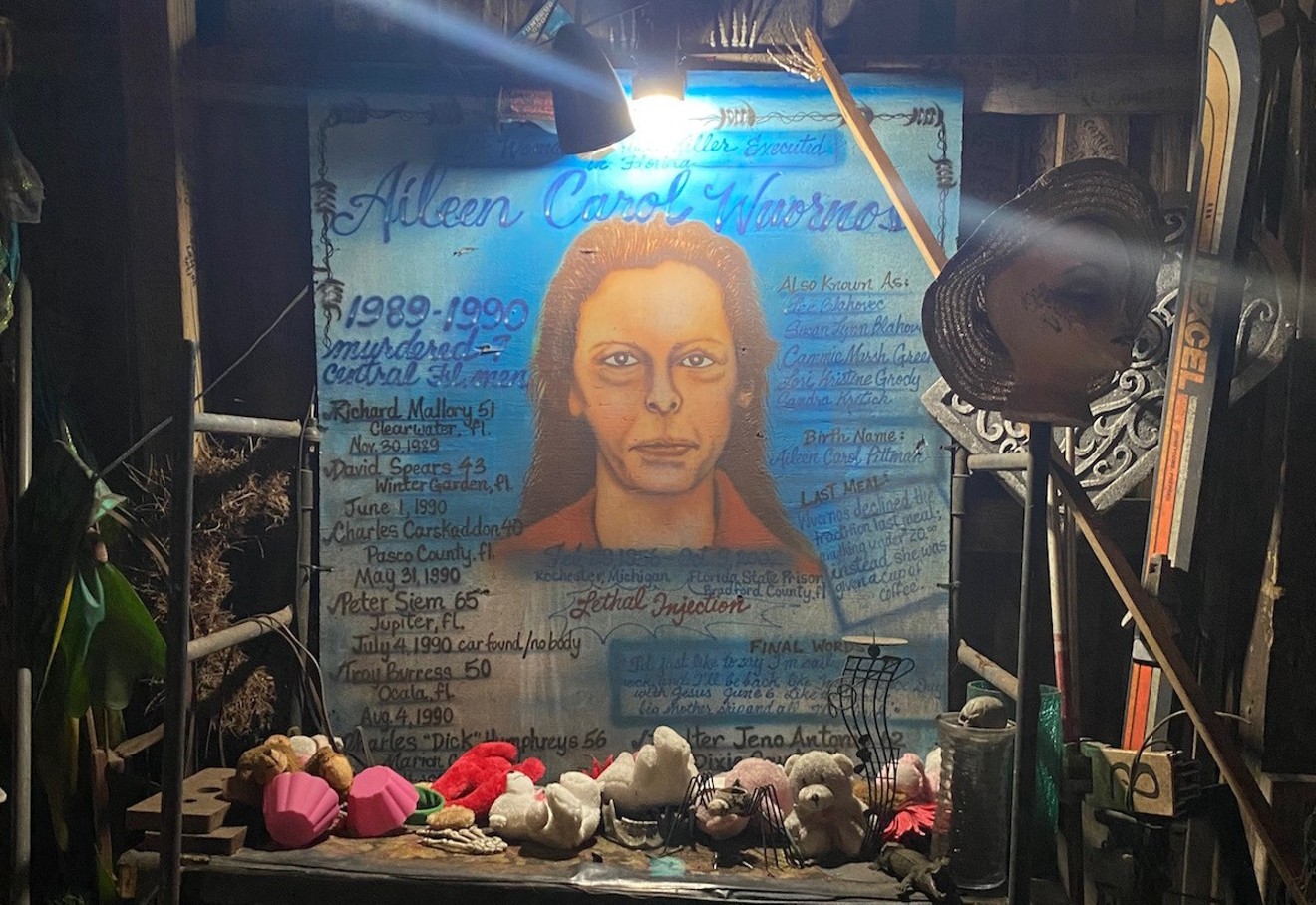 An airbrushed portrait of Aileen Wournos that has become a defacto altar for the former patron at The Last Resort bar. Photo by Jess Swanson
Her lover had just left her, and Aileen "Lee" Wuornos was too broke to rent a room at her regular $15-a-night motel. The 34-year-old sex worker had just enough for a few Budweisers, so on January 8, 1991, she headed to the Last Resort, a dingy cash-only biker bar in outside Daytona where she'd kept a low profile, playing pool and putting country songs on the jukebox, including Randy Travis' "Digging Up Bones."

Wuornos didn't know it at the time, but police had been watching her throw back beers, smoke Marlboros, and even add her bra to the collection of ladies' undergarments hanging from the rafters. At closing time, she fell asleep on the bar's front porch. When two undercover officers offered to pay for a motel room the next day, she walked out of the bar with them and into custody.

Though she was initially arrested on an outstanding warrant for possessing a concealed weapon, Wuornos was later convicted of six counts of first-degree murder — all were men who had solicited Wuornos for sex in 1989 and 1990 — and sentenced to death. She was the first woman to fit the Federal Bureau of Investigation's profile of a serial killer.

"She kept to herself. She was quiet, and never messed with anyone," Last Resort owner Al Bulling tells New Times. No one suspected she was a serial killer.


Wuornos would spend a decade on death row at the now-shuttered Broward Correctional Institution. Wuornos had said that she killed the men in self-defense after they had raped or attempted to rape her. But in 2001 she sent a petition to the Florida Supreme Court terminating her appeals. "I killed those men robbed them as cold as ice," she wrote. "And I'd do it again, too. There's no chance in keeping me alive or anything, because I'd kill again."

On October 9, 2002, she was executed by lethal injection. 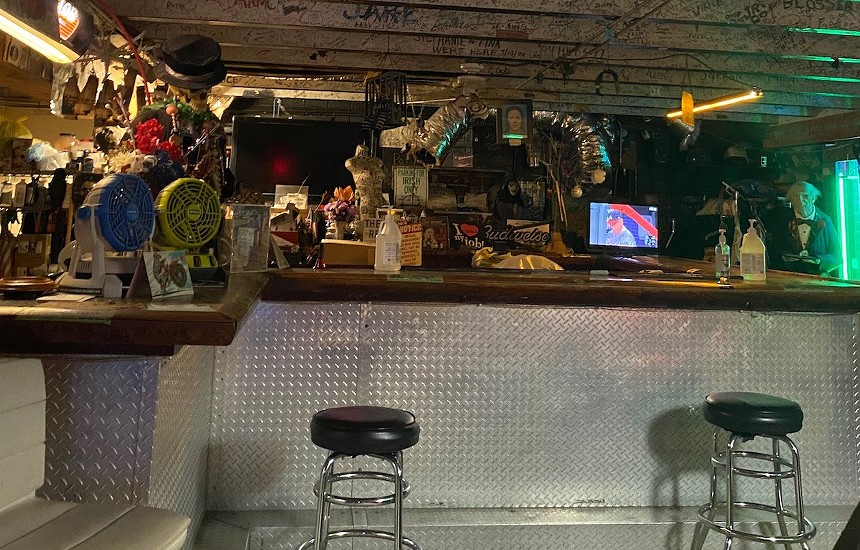 One patron says "pretty girls at the bar will feel her brush their hair."
Photo by Jess Swanson
That's when staff and clientele at the bar in the beachside hamlet of Port Orange began experiencing what they consider "paranormal activity."

"Around Oktoberfest, there was a Dollar Tree skeleton and the arm would always be missing — it kept falling off and we'd find it in weird places," says Ted E. Bear, a longtime patron. "It was always the left arm. I'd ask, 'Why the left arm?' That's where they put the lethal injection — into her left arm."

In the three decades since Wuornos' arrest, the Last Resort has attracted a macabre following, especially after the bar appeared in the 2003 film Monster starring Charlize Theron, who earned an Academy Award for Best Actress for the role. The bar’s slogan became "Home of ice cold beer and killer women."

Shortly after Wuornos' execution, a group traveled all the way from Australia to perform a séance at the bar after closing. Bulling says they captured strange orbs and unexplained objects appearing to move unprovoked. He says a handful of paranormal investigators have visited the bar over the years and reported similar findings.

"There's a bell that rings every now and then," Bulling says. "I once had a barmaid swearing there's someone in the bar even though there was no one in there."

Ted E. Bear recounts a time when she was airbrushing at the bar in preparation for Bike Week one year.

"She likes to mess with me when I'm airbrushing," she says, shaking her head. "All of a sudden the airbrush goes off on its own midair. I said, 'Aileen, let it go.'" 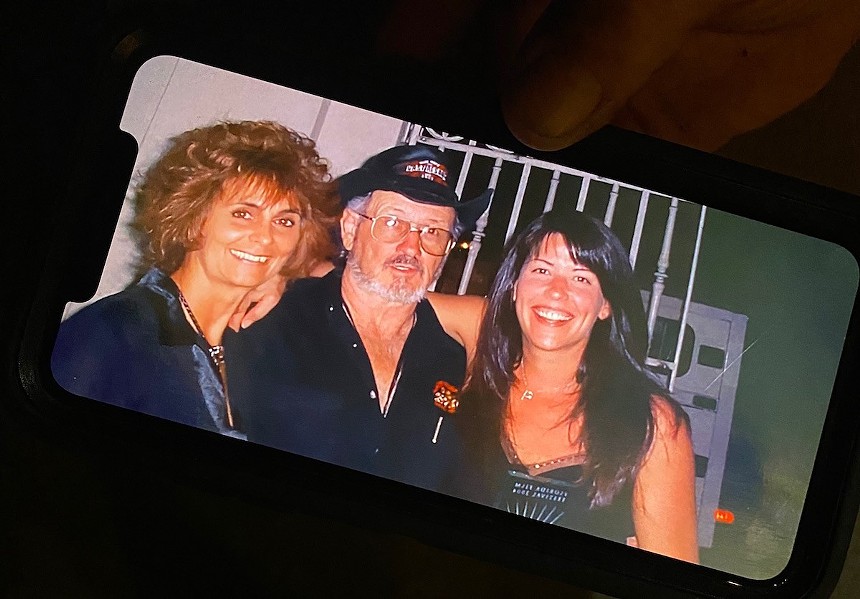 Al Bulling (center) with Monster director Patti Jenkins (right)
Photo by Jess Swanson
Another time, a vacuum cleaner that had been stowed in a closet was out and running when Bulling arrived to open the bar.

"We could hear it running from outside," Bear recalls.

She also reports that "pretty girls at the bar will feel her brush their hair."

Bulling says that after Wuornos was cremated, a "teaspoon" of her ashes was scattered near a tree behind the bar. He has a collection of Wuornos' belongings, including court documents, transcripts, copies of her letters, and the bra Wuornos pinned to the ceiling on her last night as a free woman.

"She comes here," Bulling says, "because she never left."

Though some have accused Bulling of profiting off a serial killer — eBay took down his listing for Crazed Killer Hot Sauce that featured Wuornos' image on the label — he says all he feels is sympathy for Wuornos, detailing her unfortunate upbringing and allegations of abuse.

"She was a victim," he says. "Everybody makes up stories [about her] like Bonnie and Clyde or Al Capone because there’s nobody around to verify that. But when you read her letters, Aileen was a smart and intelligent woman with incredible penmanship. She also made drawings of mountains and ranch houses." 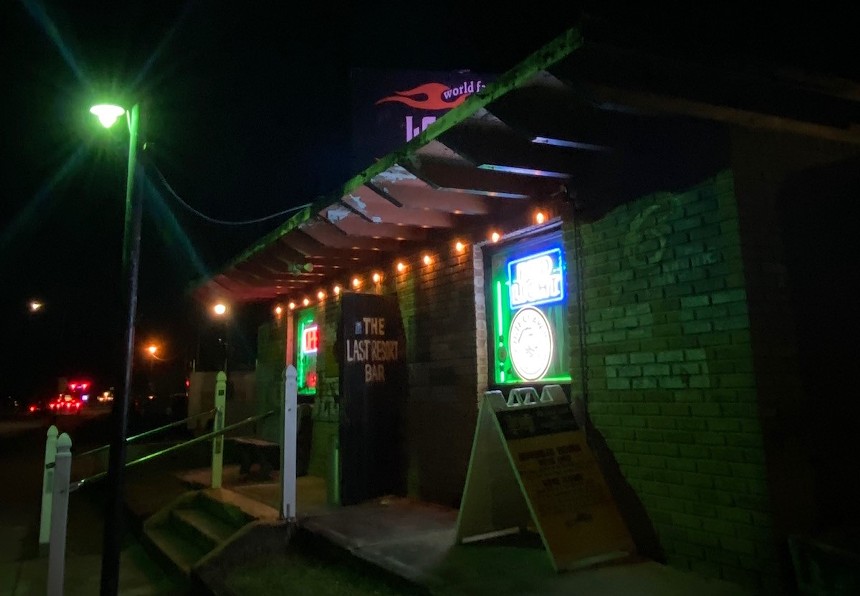 Aileen Wuornos fell asleep on the bar's front porch before officers arrested her on January 9, 1991.
Photo by Jess Swanson
Out back, there’s an airbrushed portrait of Wuornos that has become a de facto altar for the former patron, with stuffed animals and other trinkets. The mural lists the six men Wuornos was convicted of having murdered — Richard Mallory, David Spears, Charles Carskaddon, Troy Burress, Dick Humphreys, and Walter Antonio — and Peter Siems. (Charges were never brought against Wuornos for Siems, whose body was never found, but Wuornos was spotted abandoning his vehicle and her palm print was lifted from the door handle.)

The mural also includes Wuornos’ last words: "I would like to say I’m sailing with the rock, and I’ll be back, like Independence Day, with Jesus. June 6, like the movie. Big mothership and all, I’ll be back, I’ll be back."

When asked if she thinks Wuornos has indeed come back, Bear doesn’t hesitate.

"Oh, Aileen lets you know she's here all right," she says. "You can feel her presence."
KEEP NEW TIMES BROWARD-PALM BEACH FREE... Since we started New Times Broward-Palm Beach, it has been defined as the free, independent voice of South Florida, and we'd like to keep it that way. With local media under siege, it's more important than ever for us to rally support behind funding our local journalism. You can help by participating in our "I Support" program, allowing us to keep offering readers access to our incisive coverage of local news, food and culture with no paywalls.
Make a one-time donation today for as little as $1.