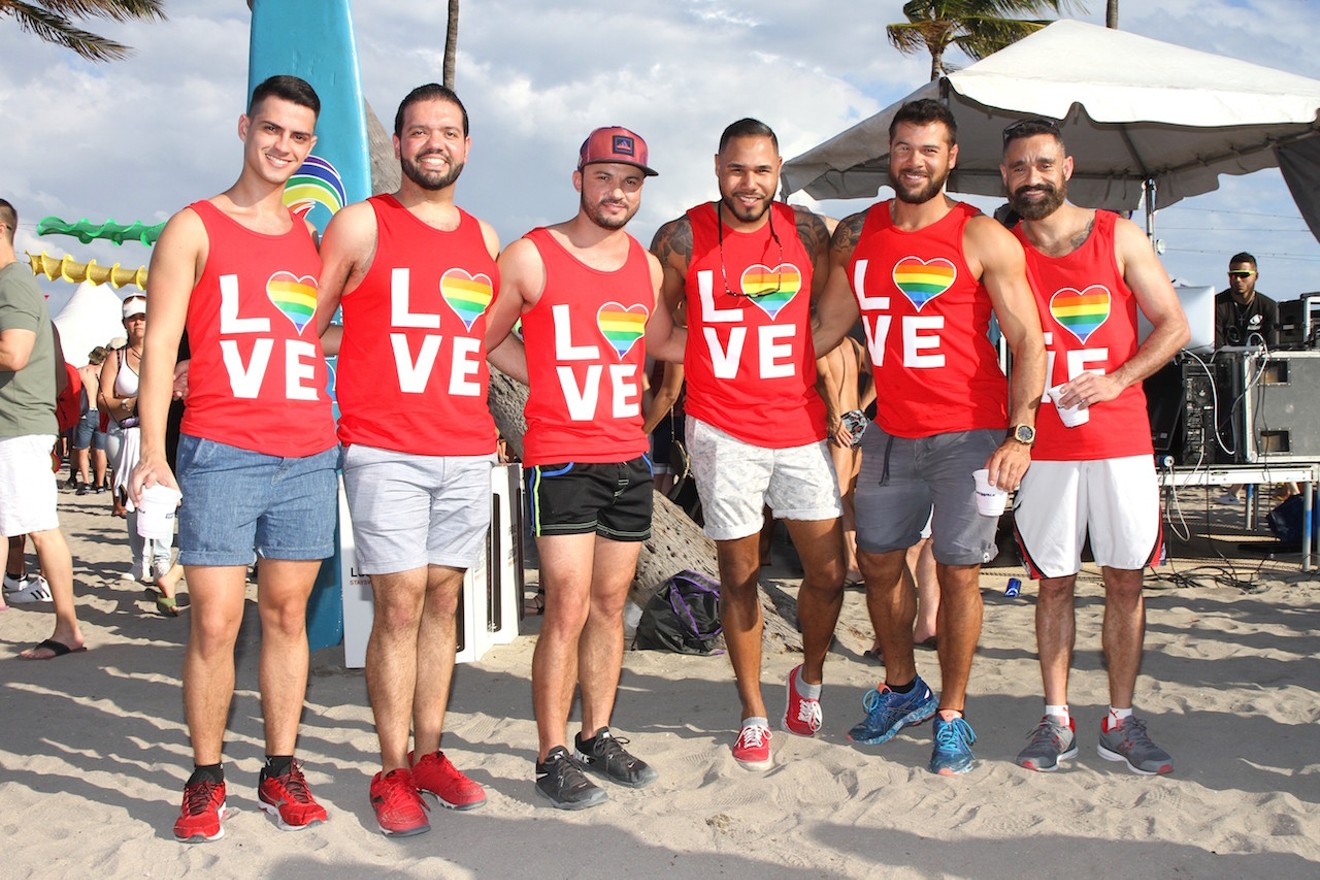 Courtesy of Greater Fort Lauderdale Convention & Visitors Bureau
Fort Lauderdale will be awash in rainbows later this week for its annual Pride festival. To mark the event's 42nd anniversary, its programming has been expanded to a four-day affair, which will be held from Thursday, February 21, through Sunday, February 24.

For the first time in the history of the city of Fort Lauderdale, a parade will be held along its beach; a moving carnival of floats that will give lesbian, gay, bisexual, transgender, nonbinary, and queer communities a chance to revel in their increasing visibility and acceptance. More than 120,000 visitors are expected to attend.

"Most people don't know that Greater Fort Lauderdale — it's a minority-majority county, the seventh LGBT destination in America," says Richard Gray, vice president of diversity and inclusion of the Greater Fort Lauderdale Convention & Visitors Bureau. "This is a unique county, an oasis in a conservative state. We want to play on that, demonstrate and show the world our cultural diversity, our focus on inclusion. Having a parade unifies people, promotes camaraderie and allows people to feel free to be themselves in a safe environment."

Pride will take off with a fashion show at the Hard Rock Event Center on Thursday, which will feature Bravo's Project Runway alumni, followed by a trunk show. On Friday, partygoers will gather at Wilton Manors, and over the weekend the event will once again be centrally located at 1100 Seabreeze Blvd., where the parade will march on Saturday, February 23, ending in a beach block party. American Idol's drag queen finalist Ada Vox and RuPaul’s Drag Race judge Todrick Hall will headline the entertainment on Sunday.

Courtesy of Pride Fort Lauderdale
One of the event's grand marshals will be Miss Major Griffin-Gracy, a transgender activist who was inside the Stonewall Inn in Greenwich Village during the historic 1969 police raid, a moment of resistance hailed as the catalyst for the modern LGBTQ+ rights movement. Dean Trantalis, the city's first openly gay mayor, will also be there to show his support.

"There's no other more beautiful place to celebrate Pride than along the beach," says J.W. Arnold, co-executive director for the event. "The LGBT+ community is an asset to Greater Fort Lauderdale and we are so grateful to the city and county for showing their support for us."

This year's carnival theme, explained Arnold, will offer a special flavor of the Caribbean and Latin American communities that are to be further highlighted with the launch of Pride of the Americas, scheduled to take place in Fort Lauderdale in April 2020 and in different cities every other year after that. In addition to a festival and parade, the ten-day festival will also offer an educational component, including guest speakers and workshops where LGBTQ+ rights and inclusion themes will be explored.

2019 Pride Fort Lauderdale. Thursday, February 21, through Sunday, February 24. Admission is free for Fort Lauderdale Beach main events on Saturday, February 23, and Sunday, February 24. pridefortlauderdale.org.
KEEP NEW TIMES BROWARD-PALM BEACH FREE... Since we started New Times Broward-Palm Beach, it has been defined as the free, independent voice of South Florida, and we'd like to keep it that way. With local media under siege, it's more important than ever for us to rally support behind funding our local journalism. You can help by participating in our "I Support" program, allowing us to keep offering readers access to our incisive coverage of local news, food and culture with no paywalls.
Make a one-time donation today for as little as $1.
Juliana Accioly
Contact: Juliana Accioly