The Boca Raton Ballet will perform The Nutcracker this weekend at Olympic Heights High School in Boca Raton. Photo by Sylvia Pangaro
If you’re just settling down for a long Thanksgiving Day snooze, very little is dancing in your head except thoughts of football, festive desserts, and a work-free holiday weekend.

Most of America has put the work-a-day world on hold to give thanks for life's many good things. The yuletide, though, isn’t far away. You can tell with the first staging of the season of a favorite Christmas ballet this weekend.

Not everything has a seasonal theme, though if partying on Saturday night is how you like to spend the holiday, then Lynyrd Skynyrd will fit the bill.

Lots more things will be happening, too. Have a look.

It may be Black Friday for shoppers throughout the nation, but pastels will mingle with holiday reds and greens, candy canes, stuffed animals, and toy soldiers as one of the first Christmas spectacles of the season takes to the stage. Boca Ballet Theatre will bring The Nutcracker to life this weekend at the Olympic Heights Performing Arts Theater. Professional guest artists will play the Sugar Plum Fairy and her Cavalier alongside a talented cast of dancers. The Nutcracker is a two-act ballet created in 1892, originally choreographed by Marius Petipa and Lev Ivanov with a score by Pyotr Ilyich Tchaikovsky. The libretto was adapted from E. T. A. Hoffmann's “The Nutcracker and the Mouse King.”  Although the original production was not a success, the 20-minute suite that Tchaikovsky extracted from the ballet was. However, the complete Nutcracker has enjoyed enormous popularity since the late 1960s and is performed by countless ballet companies, primarily during the Christmas season. A professional-quality performance of this beloved holiday classic, choreographed by BBT co-artistic director Dan Guin, sets itself apart with an accomplished cast, dazzling sets and costumes, and custom-created effects. It features American Ballet Theatre’s Remy Young and Sung Woo Han. 7:30 p.m. Friday and Saturday, 2 p.m. Saturday and Sunday in the Performing Arts Theater of Olympic Heights High School, 20101 Lyons Rd. Tickets are $20 via thewick.org.

If Southern-fried stadium rock strikes your fancy or the melodies of “Sweet Home, Alabama” and “Free Bird” cause you some foot-stomping, you’ve probably got Lynyrd Skynyrd fever. The iconic Southern rock band, formed in Jacksonville in 1964, will bring what has been called its farewell tour to Hard Rock Live on Saturday night. Initially calling themselves My Backyard, the original band members were Ronnie Van Zant (lead vocalist), Gary Rossington (guitar), Allen Collins (guitar), Larry Junstrom (bass guitar), and Bob Burns (drums). After trying out some different names and varied player combinations, In 1969, the group became Lynyrd Skynyrd — and that name has defined Southern rock pretty much ever since. Van Zant, Steve Gaines, and backup singer Cassie Gaines were killed in an airplane crash on October 20, 1977, but the band reformed in 1987 for a reunion tour with Ronnie's brother, Johnny Van Zant, as lead singer. Lynyrd Skynyrd kicked off the Last of the Street Survivors Farewell Tour in May 2018 in West Palm Beach. While it was expected to wrap up after two years, on May 2, 2020, in North Carolina, Van Zant recently said more U.S. dates are being added and Skynyrd may even make another swing through Europe. "We're looking at probably the end of next year." The group is also working on its 15th album. 8 p.m. Saturday at Hard Rock Live, Seminole Hard Rock Resort & Casino, 1 Seminole Way, Hollywood; seminolehardrockhollywood.com. Tickets range from $71 to $256. artsgarage.org.

A cultural arts exhibit honoring the life of Pompano Beach's Esther Rolle concludes Saturday. Legacy: A Commemoration of Esther Elizabeth Rolle is a journey through Rolle's humble beginning — as one of 18 children in a Pompano Beach family — and a retrospective of her long and distinguished acting career.  Rolle is perhaps best known for playing the part of Florida Evans, a character introduced as Maude Findlay's housekeeper on the 1970s sitcom Maude. The role was spun off into what became the surprise hit Good Times, television's first sit-com featuring a two-parent black family. Playing the matriarch, Rolle co-starred with John Amos and J.J. Walker. In addition, Rolle was nominated for a Best Actress Golden Globe in 1975 for her portrayal of Florida Evans. In 1979, she won an Emmy for her role in the made-for-TV movie Summer of My German Soldier. She also had a memorable role in Driving Miss Daisy. Throughout her career, Rolle took pride in her portrayals that distinguished and elevated the status of the black characters she played. The actress passed away in November 1998 in Culver City, California, just nine days after her 78th birthday. She is buried in Westview Community Cemetery in Pompano Beach. 10 a.m. to 4 p.m. Saturday at Historic Ali Cultural Arts, 353 Dr. Martin Luther King Jr. Blvd., Pompano Beach; 954-7865-7877; pompanobeacharts.org. Admission is free.

John Wayne Gacy is gone, but the deaths he caused and the agony he inflicted live on. The serial killer whose victims numbered in the dozens of teen boys and young men between 1972 and 1978 in Cook County, Illinois, is the subject of a play opening Friday at the Foundry-Wilton Theatre Factory in Wilton Manors, a presentation of Infinite Abyss Productions. An Evening With John Wayne Gacy Jr. has earned critical praise and even a Carbonell Award recommendation. As a result, additional performance dates are being added. One of the nation’s most notorious serial killers, Gacy was a successful building contractor and active in local community events and politics in the Chicago suburbs, where in his spare time he also performed as a clown at kids parties and fundraisers. Both charismatic and social, the "Killer Clown" lured his victims into his home, often with promises of construction jobs, then brutally raped, tortured, and murdered them. Set during Gacy's time on Death Row, a 14-year span after he was convicted of 33 murders in 1980, the play provides a dark and unsettling view of Gacy, his family, and his victims. As he awaits execution, he recounts — and sometimes reenacts — some of the most disturbing events of his past as a murderer living a seemingly ordinary life. Ronnie Larsen, who wrote the play, stars as Gacy, with Erynn Dalton directing. No one under 18 will be admitted. 8 p.m. Saturday and 7 p.m. Sunday at the Foundry at Wilton Theater Factory, 2306 N. Dixie Hwy., Wilton Manors; 954-990-3622; wtftheater.org. Tickets are $25 via infinite-abyss.org. 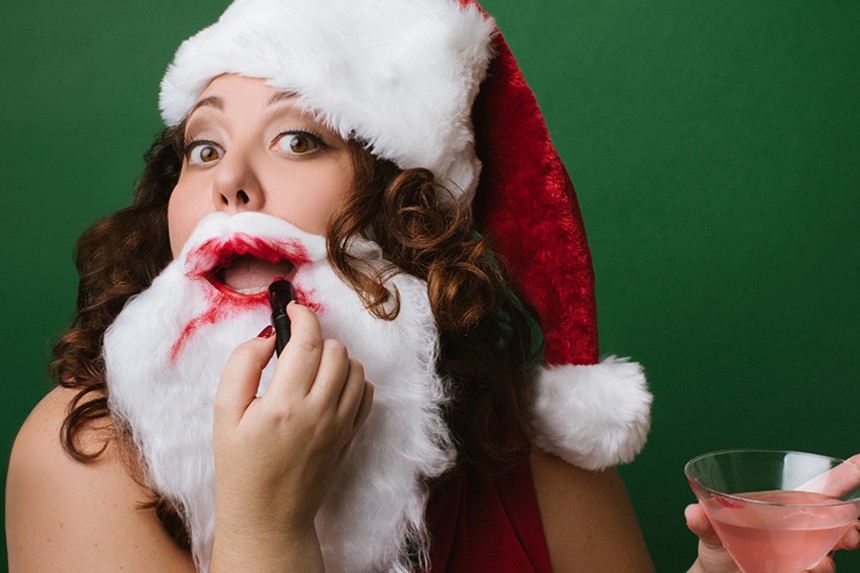 Have yourself a boozy little Christmas with Tori Scott.
Photo courtesy of Broward Center
If you like a little booze with your holiday celebrations, you’ll likely enjoy the music and comedy of Tori Scott, who performs her one-woman show Vodka Is the Reason For the Season on Saturday at the Broward Center for the Performing Arts. Often called this generation's Bette Midler, the New York City-based singer, actress, and comedian will debut her holiday cabaret at the Fort Lauderdale venue. Amy Schumer might be a more apt comparison, given her slurry revelries and TMI tales of super-not-sexy debauchery. While Schumer might have blazed the path for women succeeding in raunch comedy, she doesn't sing. For Tori Scott, cabaret is the no-brainer genre as she "willkommens" you on a musical journey of her shame and regrets. The names of her one-woman shows — "Tori Scott Is Pickled," "Tori Scott Is Overserved," and "Tori Scott Is Thirsty" — reveal the through-line she'll bring to the Broward Center. 8 p.m. Saturday at Broward Center for the Performing Arts, 201 SW Fifth Ave., Fort Lauderdale; 954-462-0222; browardcenter.org. Tickets range from $35 to $45.
KEEP NEW TIMES BROWARD-PALM BEACH FREE... Since we started New Times Broward-Palm Beach, it has been defined as the free, independent voice of South Florida, and we'd like to keep it that way. With local media under siege, it's more important than ever for us to rally support behind funding our local journalism. You can help by participating in our "I Support" program, allowing us to keep offering readers access to our incisive coverage of local news, food and culture with no paywalls.
Make a one-time donation today for as little as $1.