Cricket Daniel's The Lost Virginity Tour opens Friday at Empire Stage in Fort Lauderdale. Photo by Carol Kassie
We’ve been talking about Halloween for a long time. And finally, the spirited evening has arrived. Do you have enough candy for the little tykes (and some of the bigger kids, too) who’ll be dropping by? Or do you plan to toss the whole evening, lock the doors, turn out the lights, and head for the nearest place serving adult beverages?

No matter. It’s just about time to turn our attention away from tombstones, skeletons, carved pumpkins, and creepy decorations, and see what the first weekend of November has in store. (Actually, there is one scary event still on our agenda. Just read on.)

One thing to remember. Turn the clocks back an hour Saturday night. Fall back, that’s the order. And there’s nothing like an extra hour of sleep to make your weekend extra special.

This weekend offers some goodies.

The Lost Virginity Tour by playwright Cricket Daniel is a funny, provocative, and profound play about four women in their golden years – not talking about their grandkids or their knitting circles – but about sex and love, and recalling their “first time” in hilarious and sometimes harrowing detail. 8 p.m. Friday and Saturday, 5 p.m. Sunday (through November 24) at Empire Stage, 1140 N. Flagler Dr., Fort Lauderdale. Tickets are $39 via pigsdoflyproductions.com.

A long, long time ago, so we were told by Don McLean in his iconic song from 1971, "American Pie," the music died — on February 3, 1959. That’s the day an airplane carrying up-and-coming rock stars Buddy Holly, the “Big Bopper” J.P. Richardson, and Richie Valens crashed in a snowy field near Clear Lake, Iowa, killing everyone aboard, including the pilot. While the musicians who created three distinct performance styles died that day, the music has lived on. Florida Legends presents a tribute to that trio with a performance they're calling “The Day the Music Didn’t Die” on Friday night at the Lauderhill Performing Arts Center. Promoters of the show that has traveled the nation say the musical paean involves musicians who’ll recreate the style of those rising stars who died long before their time. Ritchie still rocks the guitar, the Bopper still answers the phone with his trademark “Helloooooo, Baby,” and Buddy still wears the same nerdy black-rimmed eyeglasses. Get your phone ready for selfies with the musicians — a meet-and-greet will be held in the front lobby after the show. Cameras will be welcome. 7:30 p.m. Friday at Lauderhill Performing Arts Center, Central Broward Regional Park, 3800 NW 11th Place, Lauderhill; 954-777-2055. Tickets are $14 to $24 via lpacfl.com. 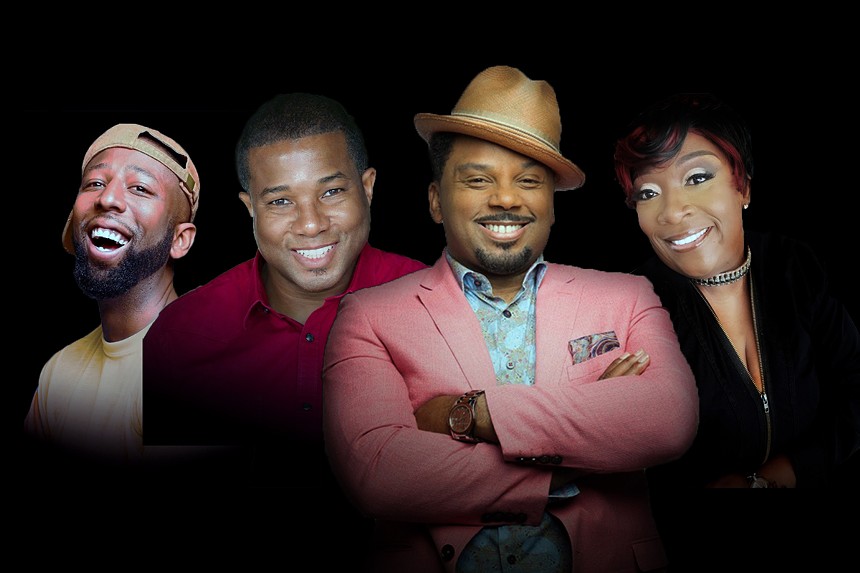 The Pompano Beach Cultural Center is sponsoring its second Stand-Up Live! show Saturday with funny guy and TV star Carl Anthony Payne as host. Payne grew up on TV in the role of Cockroach on The Cosby Show and gained acclaim as Cole on the classic Fox sitcom Martin. Still acting in television and film, Payne is now on a national comedy tour. The show opens with Wanda Smith and features rising star Brandon "Loose Cannon" Smiley and headliner Tony Tone. In between sets, enjoy DJ Lil Bear along with a cash bar and concessions. “Our first Pompano Stand-Up Live! sold out,” says Phyllis Korab, cultural affairs director. “So, get your tickets early.” The show may not be appropriate for children. 8 p.m. Saturday, November 2 at the Pompano Beach Cultural Center, 50 W. Atlantic Blvd., Pompano Beach; 954-545-7800. Tickets cost $30 via ccpompano.org or $40 at the door.

Grammy Award-winning violinist Randi Fishenfeld and the Wildfire Band perform Saturday at Arts Garage in Delray Beach. Crossing genre boundaries, get ready for high-energy rock music peppered with world beat influence. Fishenfeld has been described as “a tornado on the violin who can bow life into the dead.” A New Yorker trained early on classical violin, Fishenfeld fiddles like a pro. Her bandmates include Michael Waxman on vocals and keyboard; percussionist Jeff Lafferty; Stevan Carter, who honed his skills with a dance/rock band. John Falcone, a veteran of the South Florida music scene who picked up the electric bass in the 1980s and started his own band, is also featured in the Wildfire Band. 8 p.m. Saturday at Arts Garage, 94 NE Second Ave., Delray Beach; 561-450-6357. Tickets cost $20 to $30 via artsgarage.org.

The Lake Worth Playhouse returns to the thrilling days of radio drama this weekend when it presents an onstage rendition of Bram Stoker’s Dracula: A Radio Play, as it was performed by Orson Welles and his Mercury Radio Theater of the Air troupe on July 11, 1938. The audience can hear, but also see the exploits of Professor Van Helsing as he ventures out on his search for the blood-sucker from Transylvania. 7 p.m. Saturday and 2 p.m. Sunday at the Lake Worth Playhouse, 713 Lake Ave., Lake Worth; 561-586-6410. Tickets cost $25 for adults, $15 for children 12 and under via lakeworthplayhouse.org.

The Adolph & Rose Levis JCC Sandler Center in west Boca Raton opens "Rescuers: Portraits of Moral Courage in the Holocaust" with a reception Sunday afternoon. The display continues through December 22, the lecture series through December 17. The fall exhibition featured in the Judi & Allan Schuman Museum Gallery and the thought-provoking line-up of events are part of the Sandler Center’s comprehensive 2019-2020 Arts, Culture and Learning season. Photographer Gay Block and writer Malka Drucker spent three years photographing and interviewing more than 100 people who hid, protected, and saved Jews in Europe during World War II. During Sunday’s reception, Block will share details about the project along with inspirational stories from her work. 2 to 4 p.m. Sunday at Levis JCC Sandler Center, 21050 95th Ave. S., Boca Raton; levisicc.org. Admission is free.

In 2018, Ingrid Robinson –- who discovered her talent for art two years ago, at age 71 — launched Artists & Charities Hand in Hand nearly a year ago. She sponsored two shows that were great successes. They did so well that for her third charitable art show, Robinson has decided to triple the size, triple the impact, and triple the number of beneficiaries, as the organization debuts its inaugural fine arts event this weekend at the Palm Beach County Convention Center. Nearly 100 artists from across the U.S. will showcase their photography, paintings, mixed media, sculpture, and more. In addition, Manuel Oliver, father of Parkland shooting victim Joaquin Oliver, will be on hand to do a live demonstration. Best of all, 20 percent of all art sales will be donated to the Armory Art Center, Dreyfoos School of the Arts Foundation, and the Peggy Adams Animal Rescue League. 11 a.m. to 5 p.m. Saturday and Sunday at Palm Beach County Convention Center, 650 Okeechobee Blvd., West Palm Beach; artistsandcharities.com. Admission is free; donations welcome.
KEEP NEW TIMES BROWARD-PALM BEACH FREE... Since we started New Times Broward-Palm Beach, it has been defined as the free, independent voice of South Florida, and we'd like to keep it that way. With local media under siege, it's more important than ever for us to rally support behind funding our local journalism. You can help by participating in our "I Support" program, allowing us to keep offering readers access to our incisive coverage of local news, food and culture with no paywalls.
Make a one-time donation today for as little as $1.