Things To Do in South Florida This Weekend, December 13-15, 2019 | New Times Broward-Palm Beach 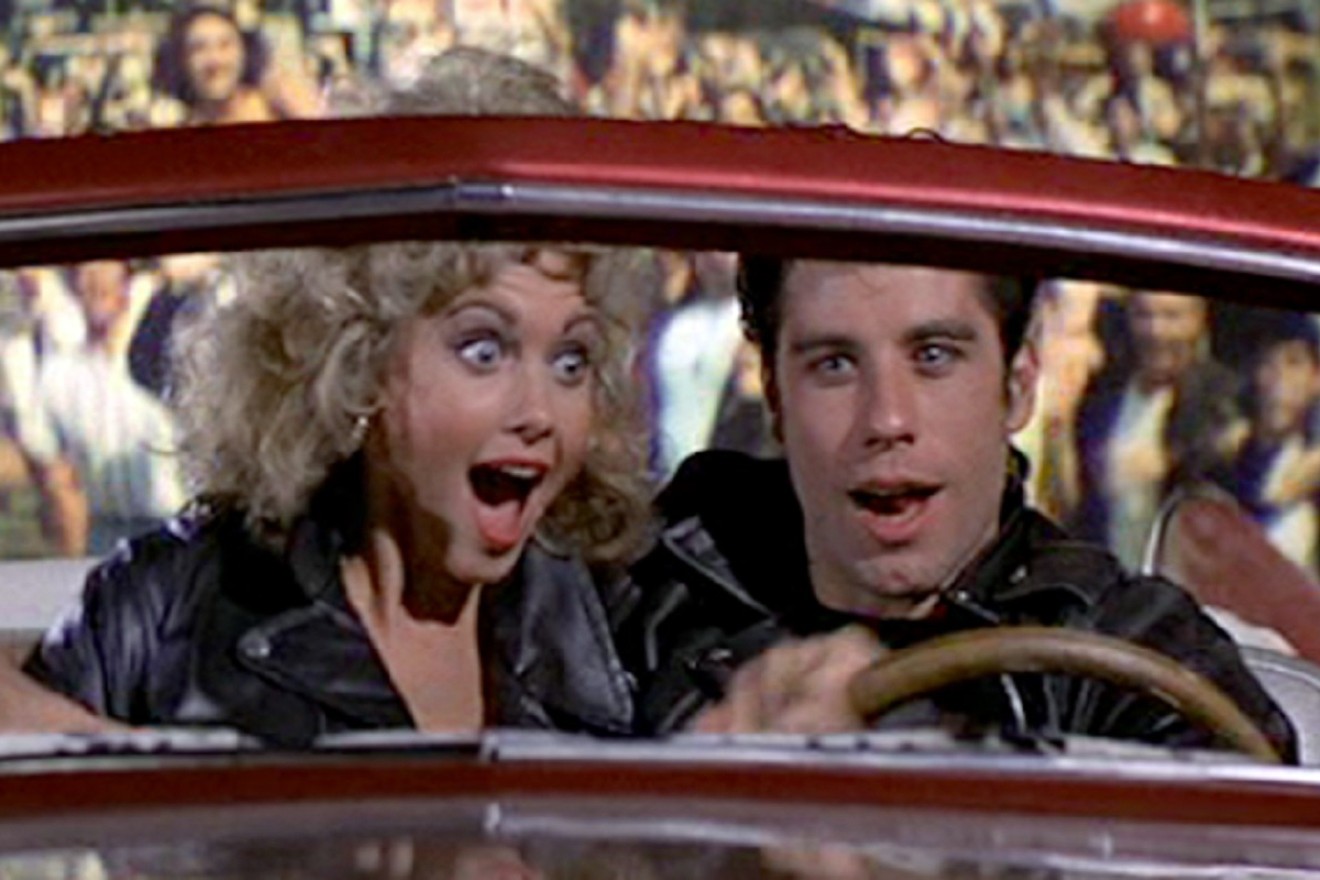 Olivia Newton-John and John Travolta reprise their roles from 1978's Grease for a singalong in West Palm Beach. Image via YouTube
I noticed an interesting holiday card in a store the other day. Regarding Santa Claus, it said: "He sees you when you're drinking."

Apparently, even Hallmark has something to say around the time when holiday cheer turns into SantaCon.

Enjoy the holiday season. But if you want to forget about decorated trees and lighted menorahs for a while, get busy with other events going on in South Florida this weekend.

Here’s some fun news for hopelessly devoted fans of Grease. The two stars of the 1978 flick, whose characters experienced some "summer loving," will reunite at the Coral Sky Amphitheatre on Friday night. Yes, John Travolta, now 65, and Olivia Newton-John, who's 71, will drop in at the West Palm Beach venue for a "Meet 'N' Grease" movie singalong. A limited number of VIP tickets, which let those who buy them meet Travolta and Newton-John, are available. In addition, there will be a massive screening of the Grease sing-along film and a  Q&A with "Danny" and "Sandy." 7 p.m., Friday, December 13, Coral Sky Amphitheatre, 601-7 Sansbury Way, West Palm Beach. Tickets costs $81 to $126 via westpalmbeach.com. A scene from the musical Once, playing at the Lauderdale Performing Arts Center.
Photo by Denise S. Trupe
The Tony Award-winning Once continues its run at the Lauderhill Performing Arts Center. The musical is based on the 2007 Academy Award-winning Irish film of the same name, written and directed by John Carney. The story of two struggling musicians falling in love, the movie starred Glen Hansard and Markéta Irglová, who also wrote the original music and lyrics. LPAC's production features an impressive ensemble of actor/musicians who play their own instruments onstage. 7:30 p.m. Thursday, Friday, and Saturday; 2 p.m. Wednesday, Saturday, and Sunday through December 22, Lauderhill Performing Arts Center, 3800 NW 11th Pl., Lauderhill. Tickets cost $35 to $55 via lpacfl.com. 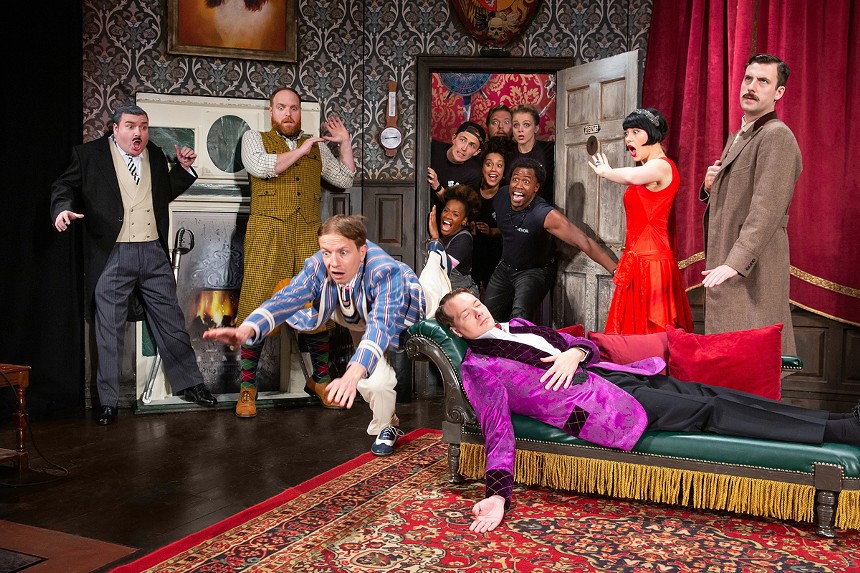 The cast of The Play That Goes Wrong, on stage at the Kravis Center in West Palm Beach.
Photo by Jeremy Daniel
Stage performers generally do their best to avoid making mistakes in front of audiences.  But in The Play That Goes Wrong, running through this weekend at the Kravis Center for the Performing Arts in West Palm Beach, the laughter is ignited by blunders. Co-written by Mischief Theatre company members Henry Lewis, Jonathan Sayer, and Henry Shields, the play introduces the Cornley University Drama Society, which is attempting to put on a 1920s-era murder mystery, but as the title suggests, everything that can go wrong does, as the accident-prone thespians battle on against all odds to make it to their final curtain call. If "to err is human, to forgive divine" is true, then this is truly a divine comedy. 8 p.m., Friday; 2 and 9 p.m. Saturday; and 2 p.m. Sunday, Kravis Center for the Performing Arts, 701 Okeechobee Blvd., West Palm Beach; kravis.org. Tickets start at $36. "Here comes SantaCon, here comes SantaCon ...." And it’s a mighty naughty bunch of St. Nicks. What began as a protest against out-of-control consumerism, but alas, quickly turned into an annual parade of drunken Santas and mayhem in cities across the country — and has even stumbled its way across the border into Mexico and Canada, and now boasts events in Australia, Japan, Italy, and even China — is getting into its dubious version of the holiday spirit. Organized locally and attended by drunken Santas, naughty elves, and tipsy reindeer, SantaCon is an evening of mostly supervised song, dance, and fake white beards all askew and puke-encrusted. The annual tradition of an unruly Kris Kringles descends on South Florida starting Saturday in Miami. Next Saturday, December 21, Fort Lauderdale keeps with its own tradition of bar-crawl overload with two Santa "conventions" — the original, which winds from the taverns of West Las Olas eastward, and the alt version, the Santa Squad Bar Crawl in Flagler Village. Noon to 10 p.m. Saturday, December 14, Bayfront Holiday Village, 301 Biscayne Blvd., Miami. Admission is free; register at eventbrite.com.

You've seen Chazz Palminteri on the big screen, often in gangster flicks. But did you know he is also a director? The Academy Award-nominated actor helms Till Death Do Us Part – You First! on Saturday at the Herb Skolnick Center in Pompano Beach. The multi-media show explores the absurdities and hilarities of love and commitment. It’s a perfect evening of laughs for single, divorced, and even devoted couples. Eternal bachelor Peter Fogel has major commitment issues as the love of his life has just broken up with him on Valentine’s Day. Sensing his own mortality, he decides to revisit the scene of all his romantic disasters with a special visitor who mentors him. 7:30 p.m. Saturday, December 14, at Herb Skolnick Center, 800 SW 36th Ave., Pompano Beach. Tickets cost $30 via eventbrite.com.

Holidays at Hard Rock Live brings in the Gay Men's Chorus of South Florida for its always entertaining holiday concert on Sunday night. This spectacle of festive music and holiday cheer this year will feature a special guest, Grammy-nominated, multi-platinum singer Jordin Sparks. The 130-member Gay Men’s Chorus of South Florida production, lead by artistic director and conductor Harold Dioquino, will be accompanied by a live orchestra in Hard Rock Hollywood's new, $150-million performance venue. Celebrating its 10th anniversary, GMCSF premieres its holiday show, sans Sparks, on Saturday night at Sunshine Cathedral in Fort Lauderdale. Sparks, who rose to fame as the youngest American Idol winner at age 17 in 2007, is coming off her limited-engagement starring role in the Broadway musical Waitress. Set to turn 29 this month, the R&B singer is currently working on her fourth studio album (which remains unnamed and has no release date yet), which is expected to include songs from what she calls an "eclectic" range of genres, from R&B and pop to country. The American Music Award winner and Grammy nominee apparently enjoys mixing genres — featured in the Lifetime reality special Jordin Sparks: A Baby Story last year with husband Danah Isaiah, Sparks has been working with Food Network to develop a baking show and recently signed with Kin to air eight half-hour episodes of her YouTube series Heart of the Batter, which will debut on Cleo TV in May 2020. 7 p.m., Sunday, December 15, at Hard Rock Live, Seminole Hard Rock Resort & Casino, 1 Seminole Way, Hollywood. Tickets range from $40 to $80 via ticketmaster.com.
KEEP NEW TIMES BROWARD-PALM BEACH FREE... Since we started New Times Broward-Palm Beach, it has been defined as the free, independent voice of South Florida, and we'd like to keep it that way. With local media under siege, it's more important than ever for us to rally support behind funding our local journalism. You can help by participating in our "I Support" program, allowing us to keep offering readers access to our incisive coverage of local news, food and culture with no paywalls.
Make a one-time donation today for as little as $1.