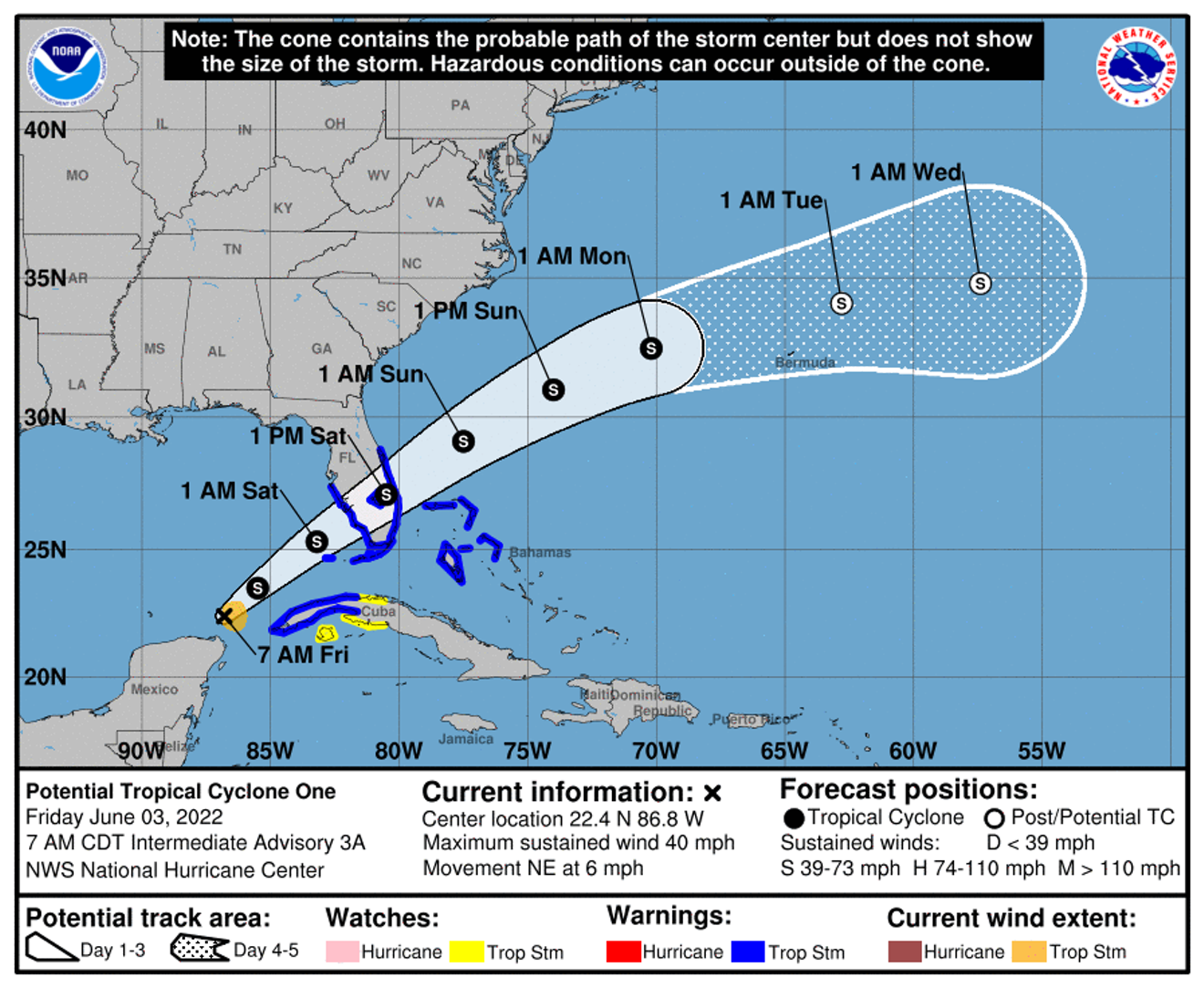 Potential Tropical Cyclone One is expected to strengthen into a tropical storm today. Photo courtesy of the National Hurricane Center
On the third day of hurricane season, the tropics sent to me: a Tropical Storm Warning!

That's right! Less than 72 hours into the official 2022 hurricane season, "much of southern and central Florida, including the Florida Keys" are under a Tropical Storm Warning as of the National Hurricane Center's (NHC) latest 8 a.m. advisory.

Tropical Storm Warnings are now in effect for much of southern and central Florida, including the Florida Keys. Tropical-storm-force winds are likely to begin in Florida by tonight and early Saturday. See https://t.co/tW4KeGdBFb for more info. pic.twitter.com/USGWhSfcuN

As of midmorning, the system, which is being referred to as "Potential Tropical Cyclone One," is an area of low pressure roughly 400 miles southwest of Fort Myers. However, the NHC expects the storm to strengthen into a tropical storm today, at which point it will be the first named Atlantic storm of the season, Tropical Storm Alex.

"Maximum sustained winds remain near 40 mph (65 km/h) with higher gusts," the NHC advisory stated. "The system is expected to develop a well-defined center and become a tropical storm later today, and some slight strengthening is possible while it approaches Florida today and tonight."

NHC predicts that tropical storm conditions are expected to start later tonight. The forecast has the storm hitting the southern and central portions of Florida on Saturday. South Florida is expected to receive four to 12 inches of rain.

"This rain may produce considerable flash and urban flooding," the NHC advisory warns. "Isolated tornadoes are possible over South Florida beginning this evening and continuing through Saturday."

For the seventh year running, the National Weather Service and the National Oceanic and Atmospheric Administration have predicted above-average Atlantic hurricane seasons owing to the ongoing La Niña weather phenomenon, which leads to cooler water in the equatorial Pacific Ocean and warmer-than-average surface temperatures in the Atlantic and Caribbean.

Miami-Dade County recommends a hurricane supply checklist that includes seven days' worth of nonperishable food, water, battery-powered devices, and a first-aid kit.
KEEP NEW TIMES BROWARD-PALM BEACH FREE... Since we started New Times Broward-Palm Beach, it has been defined as the free, independent voice of South Florida, and we'd like to keep it that way. With local media under siege, it's more important than ever for us to rally support behind funding our local journalism. You can help by participating in our "I Support" program, allowing us to keep offering readers access to our incisive coverage of local news, food and culture with no paywalls.
Make a one-time donation today for as little as $1.