Ten Only-in-Miami Things That Happen at Every Dolphins Tailgate

Miami Dolphins fans have some curious tailgate traditions. Photo by Michele Eve Sandberg
This Sunday's matchup with the Buffalo Bills at Hard Rock Stadium marks the return of the Miami Dolphins tailgate. While every NFL city may have its own version of a great tailgate party, not all tailgates are created equally. For example, no Buffalo Bills tailgate would be complete without one of their fans jumping off a pick-up truck onto a table.

It's savage. We don't get it. But hey, each to their own! Do you, Bills fans. Literally, knock yourselves out.

While you won't find many Dolphins fans risking paralysis at Sunday's tailgate, you will find some things that you'll only find in Miami. If you've never been to a Dolphins tailgate, here are ten things that you can expect to find.

Imagine the looks you would get if you played DJ Laz's "Esa Morena" at a New England Patriots tailgate. You'd be practically advertising your desire to fight a guy named Tommy.


Some things just feel right in Miami (and probably nowhere else in the country), and DJ Laz music is one of those things. Nobody in Minnesota is trying to hear DJ Laz music before a Vikings game. This is a very specific lane found only at a Dolphins game.

In Buffalo, folks jump onto folding tables that are on fire. In Miami, abuelos sit at them and play dominoes. We're just built differently in the 305.

Only in Miami will you find people spreading dominoes all over a table instead of playing cards. Playing dominoes is an extremely Miami thing to do, and at Dolphins' tailgate parties it's the literal pre-game.

Cooking an entire pig in La Caja China isn't strictly a Miami thing, but Miami might be the only city in the NFL where you'll find one at the tailgate.

While everyone else is cooking chicken wings in an air fryer or grilling hot dogs, Miami Dolphins fans are out here seasoning an entire pig with their bare hands. Why? Because in Miami, that's how the party goes down. Keep your chicken tender platter for the kid's birthday parties, this is big boy stuff. 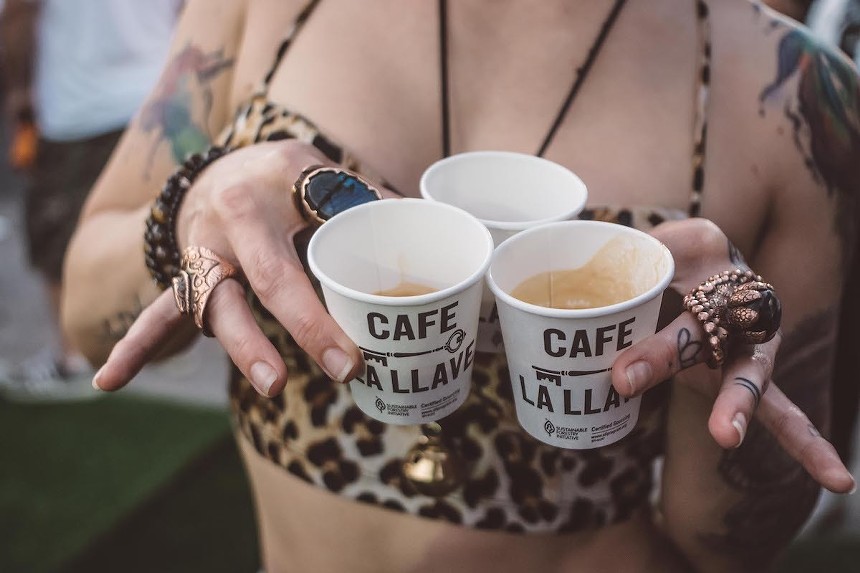 Who wants a cafecito?
Photo courtesy of JLPR

Coffee? What's coffee? At Miami Dolphins tailgates we drink cafecito, and the darker, the better.

Having the taste of Cuban espresso on your palet prior to binge drinking is practically a requirement at Dolphins tailgates. If you're not drinking it, you sure as hell will get a sniff of it.

There are a select few times over the course of a football season when the Hurricanes play at Hard Rock Stadium on Saturday, and the Dolphins play there just a few hours later.


Many fans attend one on Saturday, head home for a quick nap, and arrive back in the parking lot that surrounds the stadium to do it all over again on Sunday.

Then, somehow, they go to work on Monday. And they say Miami sports fans don't care!

Every Sunday during football season feels like Halloween.
Photo by Ian Witlen

Have you ever wanted to dress up like a pirate that roots for the Dolphins when he's not on the choppy seas looking for booty? Do you love dressing up like Hello Kitty and drinking Bud Light in a gravel parking lot? Well gosh darn it, do I have just the tailgate for you!

Miami Dolphins fans come in all shapes and sizes. Sometimes those shapes and sizes are mixed and matched into ensembles that don't totally make sense. It makes people-watching at a Dolphins tailgate worth the price of admission in itself. 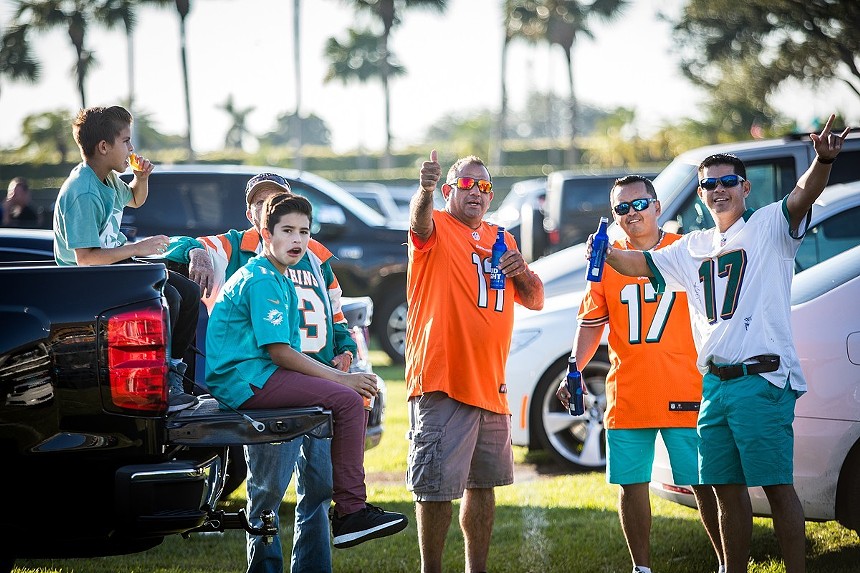 No one at a Dolphins tailgate is wearing an up-to-date jersey.
Photo by Ian Witlen

Football Jerseys of Years Past

At any NFL tailgate, you'll find an assortment of jerseys being worn by fans that honor players who will not be on the field. You'll also find colors and styles that are no longer in use.


But at a Miami Dolphins tailgate, this fact is exacerbated by the ridiculousness of jerseys the team once wore: highlighter-orange jerseys, the many Pantone shades of aqua, all the players that have come and gone through the years.

No one at a Dolphins tailgate is wearing an up-to-date jersey. The vibe is not unlike a minor league baseball team. This is what happens when your team constantly changes uniforms and star players.

Maybe you haven't heard, but hard seltzers are the wave. That means they're cool, I think. I read that on Twitter once.

Pound for pound, you won't find more hard seltzers anywhere on the planet than you'll find at a Miami Dolphins tailgate. That's an unscientific study, but it seems like it's right. In Miami, everyone wants to stay beautiful, but nobody wants to stop drinking. Hard seltzers seem to be that loophole for Miami Dolphin fans.

Comfort in a sub.
Photo courtesy of Publix

Yeah, we get fancy at our Dolphins tailgates with La Caja China, but we're also down to throw a couple of Publix subs in a cooler and call it a day, too. Whether we're going to the beach, a park, or a Miami Dolphins pregame binge-drinking party, there isn't a better bang-for-your-buck than a Pub sub. It's solid, portable, and quickly attainable.


Take a shot every time you see a Pub sub at the Dolphins tailgate this Sunday. You won't make it into the game. Your friends will stuff you in the backseat of an Uber and you'll be in bed by halftime.


Will be posting pictures of all those who shotgun a beer on my horns at the tailgate! Let's go Buffalo! pic.twitter.com/sS77RoS7yQ

You can spot the non-Dolphins fan at a Dolphins tailgate without even looking at the jersey that they're wearing. It's obvious. They're doing something totally not Miami, like eating meatloaf and drinking moonshine.

Dolphins games are more often a mix of fans because so few people grew up in Miami and stayed (or at least stayed Dolphins fans), which means that fellow tailgaters likely have allegiance to some other team the Dolphins are playing.

Every fifth table at a Dolphins tailgate seems to be an out-of-towners adventure. It's like a very strange and inebriated farmer's market. That's also what makes an NFL tailgate so special, though.
KEEP NEW TIMES BROWARD-PALM BEACH FREE... Since we started New Times Broward-Palm Beach, it has been defined as the free, independent voice of South Florida, and we'd like to keep it that way. With local media under siege, it's more important than ever for us to rally support behind funding our local journalism. You can help by participating in our "I Support" program, allowing us to keep offering readers access to our incisive coverage of local news, food and culture with no paywalls.
Make a one-time donation today for as little as $1.