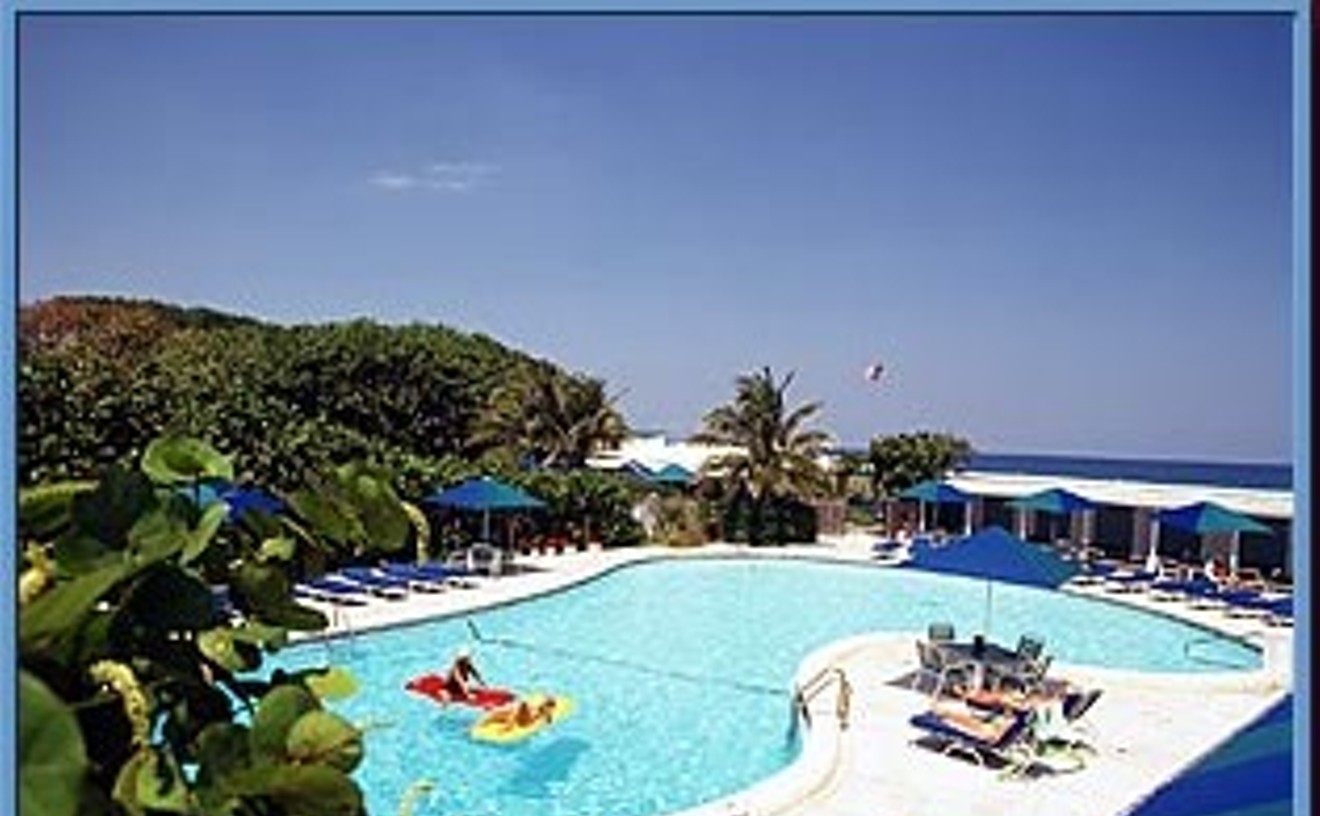 The rooms are, let´s say, intimate, and the plumbing has a clunky, antique, pre-war look, but the Colony has ambiance in spades. The buttery yellow building with burgundy trim almost demands that passersby on Atlantic Avenue step in for a look around. Have a house-specialty Bloody Mary on the shady front porch as a ceiling fan turns lazily and you view the passing crowd. (The redhead in the cool white linen top and slacks over in the corner -- could that be a Rita Hayworth apparition?) Then chill out for a few moments in the rattan-furnished lobby, or wander into one of the vividly painted meeting rooms, where bougainvillea-pink walls and an aquamarine ceiling can put anyone in a party mood. Guest rooms may be small, in the 1920s style, but they´re damn comfortable, looking more like a guest room in somebody´s well-kept old house than a hotel. The dresser is mahogany, floors are the original polished Dade County pine, the beds are covered in soft bedspreads and comforters, and the watercolors on the walls are originals. The walls of the bathrooms are white ceramic tile, and the shower and the pedestal sink, lovingly preserved, work as well as they did when the place was built in 1926. You could say the Colony´s beach club, a couple of miles away, is inconveniently located, but it has the same Jazz Age elegance as the hotel, along with a footstep-shaped saltwater swimming pool. And unlike the beachfront hotels in town, the Colony is right in the midst of Delray Beach´s bubbling dining and nightlife scene. Rates range from $75 off season to $245 for a suite in season.

The Rod and Gun Club

You´re tired of living in a place where the oldest architecture is a strip mall built in the 1950s? Well, soak up the past and shed this use-it-up-and-run South Florida culture by hopping on Alligator Alley and heading to Everglades City on the other coast. And we don´t mean the Pacific. There, you must stay in the Rod and Gun Club, which was built back in 1840 by fur traders. In the 1920s, mogul Barron Collier bought the place and turned it into his own private club, where he hosted a few obscure fellows like Franklin Delano Roosevelt, Harry Truman, and Ernest Hemingway. Now, nobodies like us can stay there for a mere $105 a night plus tax. As you sit on the grand veranda or in the restaurant with its rich, polished wood as the Barron River (yeah, the guy had an ego) flows nearby, you can feel the history. That´s right, Dorothy: You´re not in Sunrise anymore.

This scandal seems almost too good to be real. You have the last decent public park on the beach slated for massive condominiums by a greedy, unscrupulous developer (Michael Swerdlow). There´s the sleazy, glad-handing mayor (Bill Griffin) who sells out the beach and his town (Pompano Beach) for political and financial gain. You have a do-little state attorney (Michael Satz) pretending he´s investigating the mayor´s corruption, including a new job that the developer helped him get at one of the country´s largest construction firms. And there are hordes of concerned citizens clamoring for all their heads. That´s just the first episode. In the second one, the mayor is voted out of office, then leaves the job. And the project is given the boot by the new city commission. Can´t wait for the next installment.

What you are about to read is true. And it has never before been published. Last year, a teacher asked third-grade students at the prestigious Lighthouse Point Academy a seemingly innocuous question: Can you name your favorite food? Surprisingly, sushi surfaced as the preferred chow for several savvy members of the Sponge Bob set. Not to be outdone, the young son of Boca Raton Mayor Steve Abrams thought hard. Then the boy, whom New Times is declining to name to protect him from animal rights wackos, piped up. ¨Caviar,¨ came his response. After a pause, the stunned teacher asked, ¨What kind of caviar?¨ ¨Sturgeon,¨ the boy replied confidently. Three words: Only. In. Boca.

Peter Sheridan isn´t just a local boy; he´s a mama´s boy. Mom Joan Sheridan is a long-time Fort Lauderdale political activist who has been involved in litter pickups and neighborhood watches. But she should have been watching her son more closely. Pete, when he was assistant city engineer for the City of Fort Lauderdale, got a little too cozy with a company called Recreational Design and Construction. While he oversaw RDC´s contracts with the city -- and steered the company hundreds of thousands of dollars in public business -- its workers built a $13,000 spa in his home. Funny thing: Pete didn´t pay for it. When his underhanded dealings were made public, his mother quickly wrote a check. An ensuing criminal investigation found that both Pete and Joan were unethical, but no charges were filed. Pete resigned with dishonor, but bless us all, he landed on his feet. Local engineering firm Keith and Schnars -- which also has numerous contracts with the city -- hired him tout de suite. It just goes to show that in Broward County, everything´s upside down. As Bob Dylan told us: ¨What´s good is bad, and what´s bad is good/You´ll find out when you reach the top.¨

A year ago, Broward County Supervisor of Elections Miriam Oliphant was one of the brightest stars in the South Florida political firmament. We said so ourselves, naming her Best Politician in our 2002 Best of Broward-Palm Beach issue and concluding, ¨Seems the woman in charge of the political process in Broward knows a thing or two about politics herself.¨ She was young, gifted, and black, not to mention photogenic and a liberal Democrat with a lofty vision for an office that had been held for a gazillion years by the uncharismatic, if reliable, Republican Jane Carroll. Oliphant seemed destined for success -- until she actually had to do her job. Now beleaguered and botched elections are the words that seem destined to cling to her. She may have pulled off the February and March 2003 elections without major problems, but it could be argued that she did so by scaring voters away from the polls. Regardless of how Oliphant fares in the future, her legacy, alas, will almost certainly be allegations of cronyism, nepotism, financial irregularities, and incompetence.

So a bunch of naive folks in Broward County thought they voted this past September. So a few months later, investigators turned up a tray of unopened ballots in a file cabinet in county elections supervisor Miriam Oliphant´s office. So those ballots were never time-stamped and apparently forgotten. So the clerk responsible for picking up the ballots from the post office, Glen Davis, was allowed to continue in his job despite reprimands for being drunk and arriving late. So Davis had a relationship with Robin Darville, Oliphant´s sister. So what?

He wants to enforce sodomy laws against gays. He believes the world would be a better place if more of the right people carried handguns. He wants God in the classroom and counts the Christian extremists at Coral Ridge Presbyterian Church as some of his most important supporters. He´s a Republican who calls himself a Democrat for the most cynical of political purposes. Yes, there are lots of things not to like about Jim Naugle. As a mayor, though, he can´t do much damage on those counts. And as far as mayors go in Broward and Palm Beach counties, he is simply the top of the heap. Naugle is the most accountable elected official in Broward County, a fiercely independent man who doesn´t schmooze and isn´t in developers´ pockets. He´s not afraid to speak his mind, and he´s been a first-rate steward for the city. So we had to cheer when he routed the untested Tim Smith in the February election. But don´t get any big ideas, Jim. If you run for Congress, we will have no choice but to out you (politically speaking, of course).

The category this year would better be titled Best Reporters. Kestin and O´Matz do kids better than anybody in the country. The Sentinel´s finest story this year came on August 11, when Kestin and O´Matz, along with Diana Marrero, located nine kids whom the state Department of Children and Families couldn´t find. One of the families was listed in the phone book. Just three days after the story was published, DCF chief Kathleen Kearney resigned in disgrace. (There was, of course, the little matter of Rilya Wilson, who vanished long ago, to give the story zing.) Then, in November, the Sentinel filed a lawsuit that eventually forced the state to release a list of missing kids. And in January, despite DCF stonewalling, our top-rated pair of journalists learned the agency wasn´t following its own rules about quickly notifying cops when kids disappeared. The pair´s dogged street reporting and political savvy, as well as their ability to win support from their bosses, deserves praise. Let´s hope they don´t run off any time soon.

OK, so Bill Rose is a deputy managing editor at the Post. He´s not working a beat, day in and day out, not out shaking the bushes, not crunching big stuff (that would fill a book if they´d give ya´ the time and space) into bite-size portions. That´s a tough biz. Still, in the course of three days in October, this former editor of the Miami Herald´s literate and legendary Tropic magazine showed how it´s done, how daily journalism can be layered and leavened with tragedy, humanity, humor, and grace. Rose covered the arrival of Hurricane Lili to southern Louisiana, an area he called a ¨wind-swept world of salt water, mosquitoes, and hurricanes¨ inhabited by people who ¨tend to wink at pending calamity and shrug off storm warnings with the practiced air of those who have seen this many times before.¨ That first sentence of his October 3 story was a mouthful, so he threw in a short sentence afterward that gave the whole thing dramatic punch: ¨But this time, they´re running,¨ Rose wrote. And then, when the storm didn´t cause the anticipated Hurricane Andrew-like devastation, Rose burrowed into his own urge to dismiss its effects. By following the inner voice that told him this storm was nothing, Rose discovered the heart of the tale when he found himself moved by ¨one small shred of Lili´s detritus.¨ He described a broken child´s plate inscribed with a boy´s birth date and a mother holding it in her hands while tears made her shoulders shake. The family´s trailer had been blown 25 yards and sat upside down in the mud. Everyone in that family survived Lili, but Rose showed in that moment how tragedy is individual and specific, and he made the reader feel it too. He also showed the wisdom of trusting one´s self and following the thread where it leads. It was some nice work.