Word to fashion divas: You´re not worth your Vogue subscription until you´ve seen a poodle in purple sequins work a runway. Those style credentials ain´t worth doggie-doo until you´ve seen a dachshund don Harley leather. And you just haven´t lived until you´ve caught a Chihuahua in a bikini. For 20 years, the Pet Therapy Dog Foundation of Boca Raton, a nonprofit group, has presented free canine couture shows at hospices, nursing homes, and the like in hopes of bringing smiles (or at least smirks of disbelief) to those who most need ´em. ¨People get a real kick out of it,¨ says founder Lynn Hunt Hoffman, who, by the way, also organizes animal weddings and bridal shows. ¨And the dogs love the applause.¨ Hoffman´s glam pooch posse includes 30 unbelievably well-trained, trick-performing models. Fashion shows include casualwear (dresses, smocks, skirts), a fantasy collection (hula girls, firemen, strippers), and formalwear (evening gowns, tuxes with tails and top hats). ¨Even the men laugh with the dogs,¨ Hoffman says, ¨not at them.¨

Psyched about your two-week vacation but dread boarding your kids, er, pets at the vet? Then don´t. Instead, put them up at a resort where dogs, cats, and other critters are spoiled rotten (only the best for little Spanky). For as little as $25 a day (plus a mandatory $31 bathing charge), the kindly folks at Clint Moore will dote on your four-legged family members. Upon arrival, pet guests are led to spacious, air-conditioned quarters. Next come the perks: private yards for dogs, squishy toys for cats, personal valets, special menus, and three daily play sessions for all. And did we mention that a vet actually lives on the premises? It´s like a friggin´ Providence episode. White picket fences surround the place while a side pen makes a cozy home for a ragtag group of abandoned animals including Porky, a 300-pound pig; Stormy, a miniature horse; and goats Milo and Daisy. The best thing to ogle at this place, though, may be the endless parade of pampered pooches and their well-heeled owners.

Watch a dog´s nose burrow down into a bed of seaweed and then spiral into it, whole body writhing in joy, and you´ll understand what Anita Lankler did for dogs on Jupiter Beach. In 1994, Jupiter was set to follow most other waterfront cities and ban dogs from the Atlantic. Lankler and a couple of her friends asked the town council to reconsider. They promised to clean up after the animals. The Friends of Jupiter Beach grew from 30 volunteers in 1994 to more than 5,000 in the next nine years. The group organizes regular monthly cleanups (of human and animal litter), publishes a code of conduct for dog owners, and patrols the beaches to issue gentle reminders. It works. The week before Anita Lankler died of cancer in January of this year, Gov. Jeb Bush named her a recipient of a Points of Light Award. And some lab or beagle or bull mastiff is still on the beach in Lankler´s town reveling in the seagulls cawing, the waves breaking, and the living, breathing multifarious stench of it all.

At the beginning of Galt Ocean Mile, where a condo canyon screens Fort Lauderdale Beach from public view, there is a monument, a marker really, to Arthur Galt, the man who once owned this land, the land that became the condo canyon we now call Galt Ocean Mile. That´s a circular sentence. An off-putting sentence. And that´s the way those 24 condo towers appear to the people who drive or walk past them who don´t live in them and so don´t enjoy the spectacular view. These behemoths repel. Fort Lauderdale Beach is unusual in this subtropical neck of the woods because so much of the beachside of A1A has been left open. So why honor Galt? We don´t know, but maybe it harkens back to a time when any development was good development. Maybe it was seen as Fort Lauderdale´s coming of age. Someone wants to build a wall of condos on the beach? Great! Wait a minute... That sounds an awful lot like what´s going on in Fort Lauderdale today. Galt owned the land, and he sold it to developers in the 1920s. So maybe we should rethink this as a cautionary marker. When developers breathe down your neck and flash money and throw around big ideas, take a step back, breathe deep, and think what will make Fort Lauderdale a more livable place in 20 or 40 or 80 years. Is it more condos, or more parks? Wider roads, or wider sidewalks? More Arthur Galts selling to developers? Or more Hugh Taylor Birch´s giving to the public?

The early-morning conversations at Skinner´s Grill are like a river. Sometimes the talk is smooth and graceful, eddying around a twig of thought that slips from person to person. And sometimes it roars -- with laughter or what sounds like rage but is more like passion, but passion that turns to laughter. At the L-shaped counter, Frankie reads the sports section. He´s not talking to the waitress just now, so she is unable to get his order. ¨What does it take to get some food ´round here?¨ he finally hollers out. ¨Oh, you´re talking to me now?¨ she responds. Bragdon sits in the corner, orders toast, and often brings tomatoes from his garden for Ms. Skinner to slice. ¨How much does an order of toast cost?¨ one of the guys asks one day when he decides it´s time to prove that Bragdon is probably the cheapest man on earth. Another day, Frankie and Bragdon discuss the war in Iraq. Basically, Frankie says if we are going to go in there, we got to go to win. And Bragdon argues that we should throw all our technology at them so a minimum of our soldiers dies. But Iraq is only one subject. There´s also Serena Williams. There´s the weather. There´s Jay-Z. There´s the slave revolt in Haiti. There´s Osama. ¨He´s Cisco,¨ one woman keeps insisting every time the subject returns to bin Laden. She thinks he has had plastic surgery and is now living in the United States. And then there´s the question of whether anyone should bother trying to properly pronounce Bragdon´s name. It´s respectful to do so, Bragdon says. ¨That´s just the point,¨ Frankie answers.

Best Place to Beat the Heat

Sure, it´s a labyrinthine building with drab hallways and floor plants -- and, yeah, those stairwells look like they belong in a federal penitentiary (Alternate title: ¨Best Place to Film a Shank Scene¨) -- but don´t forget the Broward County Governmental Center as a summertime destination. Hey, how else you gonna take advantage of government handouts? That cold air is free, man. What´s more, entertainment waits behind almost every door. Public hearings (every second and fourth Tuesday in room 422 at 2 p.m.) are a good place to meet your community´s angriest and most vocal critics, and zoning board meetings will put you to sleep faster than those tapes of whales singing. So if you want to cool down this summer, go to the center´s front desk and get a visitor´s sticker. Or don´t. It doesn´t seem to matter. New Times strolled through the center without one, poking our nose in different rooms, eavesdropping on water-cooler chatter, taking smoke breaks with public employees. Ah, government in the South Florida sunshine. 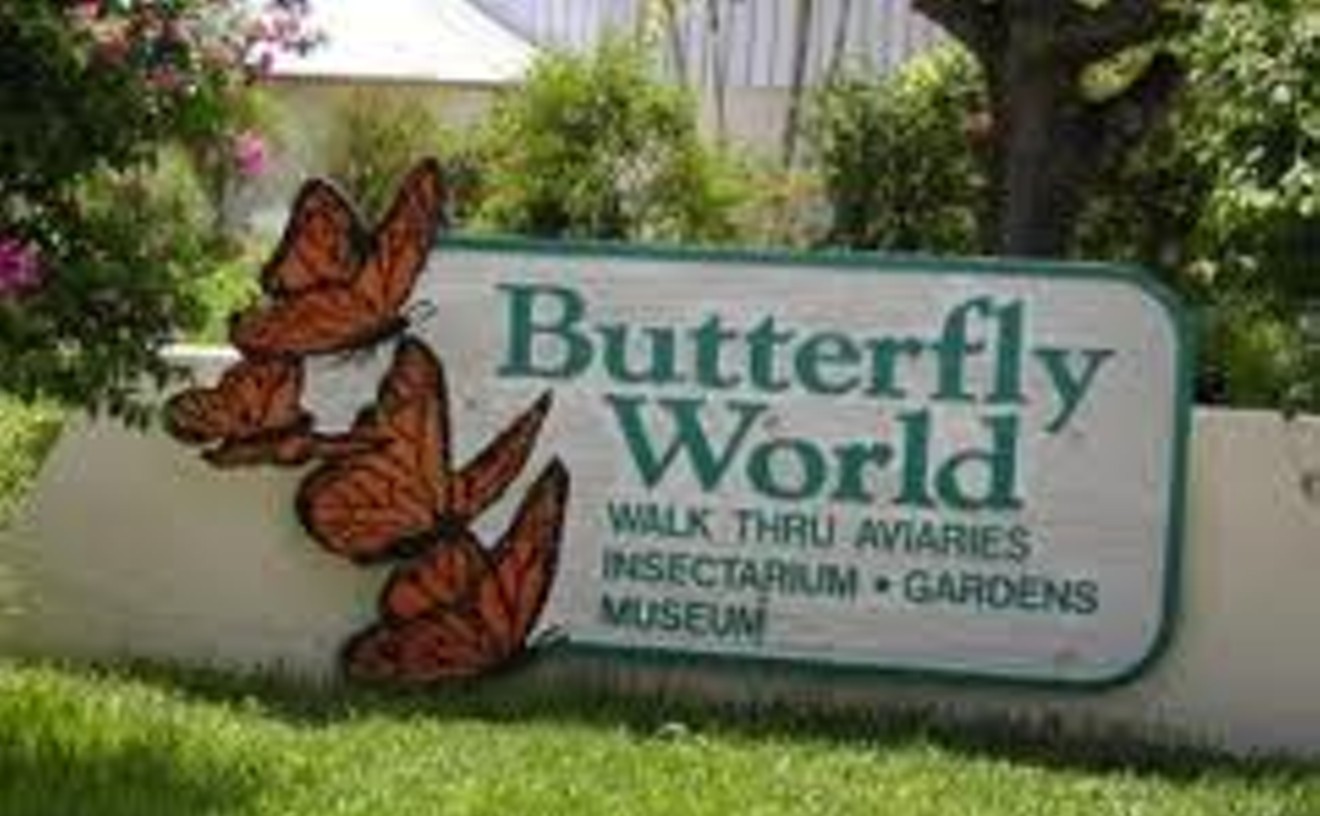 Only the hardiest of butterflies ever ventures north of South Florida´s subtropical zone. Oh sure, temperate-region dwellers may get a colorful eyeful during visits to museums of natural history, but those lepidoptera are impaled and quite, quite still. Butterfly World, on the other hand, has created screened, outdoor gardens alive with fluttering brilliance. The plants and flowers that grow in the 240,000-cubic-foot habitat replicate the flora that butterflies depend upon in the wild. There are also more than 5,000 butterflies representing 80 species from South and Central America, the Philippines, Malaysia, Taiwan, and other Asian countries. If you´re motionless, some will light upon you. For the jaded out-of-towner from the tropics, hundreds of species native to Florida also swish about the outside gardens.

¨I´ll give you two dollars for that bag of forks.¨ Well, that answers the question of ¨where´s the bargain?¨ But the Swap Shop, that wonderfully entertaining theater of human tragedies and oddities, offers more than good bargains. Behold a sea of mullets, Camaros, mullets in Camaros, Rastafarians, girls in thongs, guys in thongs, crying children, midgets. And this is just in the parking lot. On any given weekend, you can browse a plethora of goods. But even better, you could possibly overhear people haggling over the price of transgender porn; watch tourists take photos in front of the somewhat-sad circus; see a young woman argue with her significant other on a cell phone while buying a Twister mat; and witness a young man dressed in a goat costume, complete with hooves, play Dance Dance Revolution in the arcade. (DDR is a Japanese game in which you pre-program a song and have to follow the dance steps on a lighted board. Goat-boy was damn good. The hooves didn´t impede his desire to dance. Yes, it really happened.) Up next: Survivor: The Swap Shop? We can only hope.

Sure, you almost always feel all warm and fuzzy after doing volunteer work. But it´s not bad if you can learn a thing or two in the process. The Guatemalan-Maya Center is a great place to help new immigrants adjust while learning about one of America´s oldest civilizations. Every month, the center serves about 450 families chosen from a population of 30,000 Guatemalans living in Palm Beach County. Still, the charity has no regular volunteers. Managers say they´re looking for folks to mentor Guatemalan kids, help run two after-school centers, and translate for recent immigrants. Spanish is helpful, but the center is desperate for volunteers who speak Mayan. Many of those aided by the center are expectant mothers in need of translators for doctor´s visits. Guatemalans are one of South Florida´s fastest-growing minority populations, so the center is a great opportunity to learn a little about your new neighbors while helping out.

Moviemakers just can´t get enough of Broward County´s little honky tonk by the sea, Hollywood. Indeed, several big-time moguls have in recent years become enamored of the picture-perfect beach and Broadwalk, the cozy downtown, and the ´40s-era homesteads. And they have brought the stars with them. During the past two years, alert stargazers could have caught Denzel Washington filming Out of Time, Julianne Moore in The Hours, and Brian Dennehy taking the lead in Three Blind Mice, a made-for-TV movie. Music groupies got to gaze at Ice Cube in All About the Benjamins and Ludacris during filming of 2 Fast 2 Furious. Keep your eyes open for Matt Damon, who just might end up filming a bit of the Farrelly brothers´ Stuck on You in our Hollywood.