Before there was the Coral Springs Museum of Art, there was the Schacknow Museum of Fine Art, an expensive vanity project for one of South Florida's most colorful characters. And when the deal between Max Schacknow and the City of Coral Springs went sour, the wreckage was salvaged by a person as low key as the millionaire is flamboyant. That person was the unassuming Barbara O'Keefe, nominally the Coral Springs Museum's executive director but also its curator. We're tempted to say she single-handedly turned the museum around, but she'd be the first to acknowledge that she hasn't done it alone. Still, her staff and budget are both minimal, and she struggles constantly to capture the attention of the region's media. And yet she perseveres, pursuing an ambitious agenda in an environment where others might be happy just to survive. The museum now has an artist-in-residence program that produces works for a small but growing permanent collection, and there's a sculpture garden with some of the best public art in the area. Never one to rest on her laurels, O'Keefe also recently installed a modest but impressive reference library in the museum, working with donations scoured from other facilities. Oh, did we mention that, year after year, she also puts together a handful of worthwhile exhibitions that showcase South Florida artists? 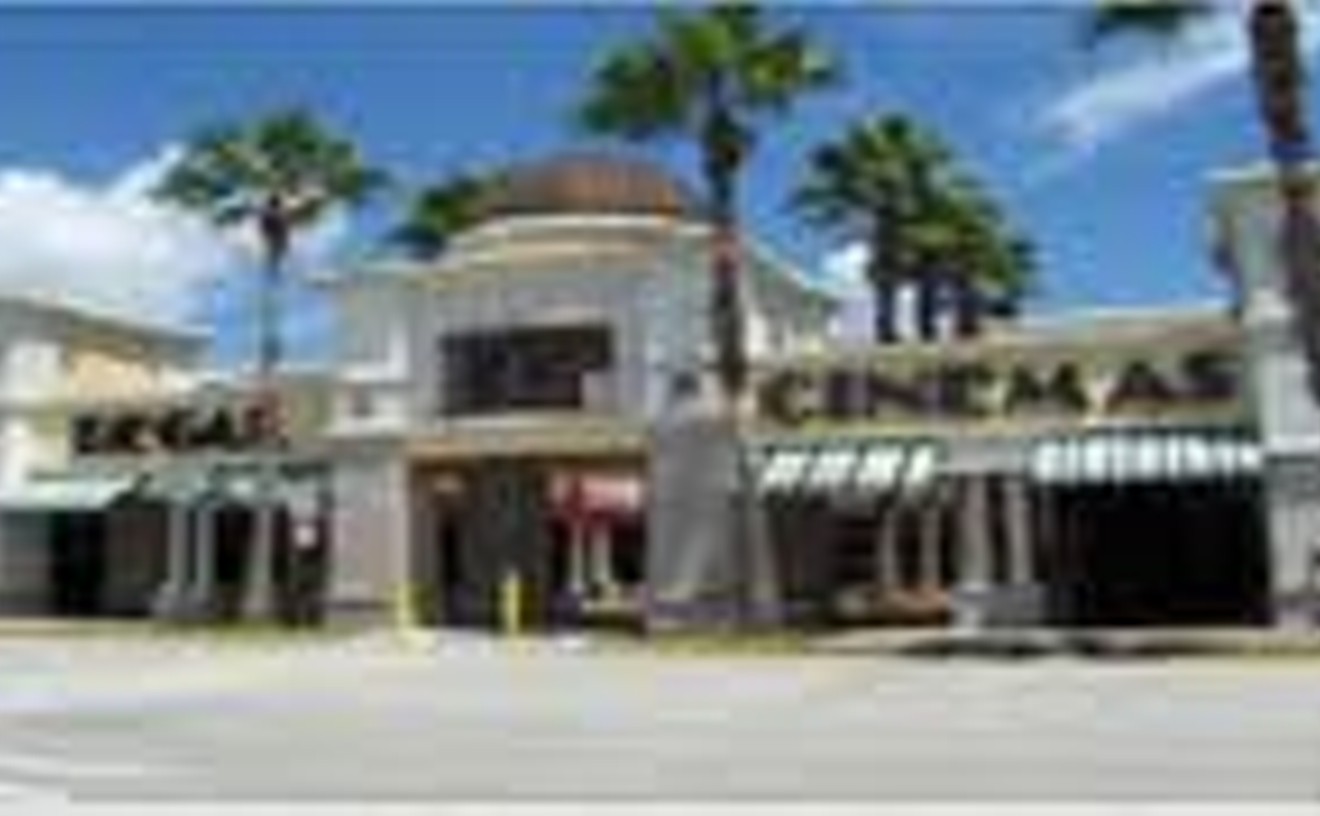 It may not attract the same obscure gems as the smaller houses downtown, but if you're eking out toward 'burbdom, you can still treat yourself to thoughtful fare at this multiplex. This was, after all, the only theater in Broward that was showing Sideways the week before its Best Picture nomination. Then too, if you just want to let your jaw hang slack for 90 minutes, the sound system and stadium seats will certainly accommodate Constantine or some such Keanu cacophony. Bonus points for maintaining scattered restrooms (to cut down on midfeature piss sprints), offering a decent arcade that gives change in laundry-friendly quarters, and running ticket giveaways for patrons who donate when the blood bus comes 'round.

Tired of the ho-hum sterility of the average multiplex theater? But bummed about watching another video alone at home? That's where Thursday nights at the Loft come to the rescue. Concealed above the hubbub of the music store below, the second-story theater is a hodgepodge of sofas and easy chairs that provides a homey milieu -- with plenty of company. Each week at 8 p.m., the theater presents "the best (and worst) in cult and horror movies," its fliers brag. Judge for yourself; over the past few months, the Loft has run films such as Ichi, The Killer; The Return of the Living Dead; Silent Night, Deadly Night; Black Christmas; and New Year's Evil. Best of all, it's free. Remember to bring your own popcorn and maybe even somebody to hold hands with.

Donald Margulies' funny, sad play about one unhappy Jewish family in 1965 Brooklyn received a startling, dynamic production from the Caldwell Theatre Company, a noted departure from that troupe's usual safe fare. Visually striking staging was matched with an engaging cast and outstanding work from the Caldwell's resident design team. The result was a memorable, unusual production that played like a strange dream -- fascinating, sometimes illogical, always compelling.

Gary Cowling for Take Me Out

Lisa Morgan for The Memory of Water

Best Actor: Sometimes good guys finish first. Cowling was thoroughly delightful as a geeky gay accountant whose crush on his baseball star client turns into a passion for the game itself. Radiating charm and good humor, Cowling's fumbling characterization was the emotional heart of the Caldwell Theatre production and a model of impeccable comedic timing.

Best Actress: Lisa Morgan has had our applause before -- for her dramatic and comedic work. But Morgan managed both at once in the Mosaic Theatre production of The Memory of Water. Her performance as an embittered woman in the North of England found the role's great sadness in a memorable portrait of middle-aged frustration. The role also showcased her gift as a comedienne; in one drinking scene, her teetotaling character goes on a bender in a priceless comedic riff, Morgan-style.

The veteran Hall has long been known for his consistent professionalism, but this time out, his direction of Donald Margulies' oddball memory play really excelled. Hall's compelling visuals were easy to spot and admire, while his subtle, beautifully paced scene work and careful coaching of two subteen actors were far more subtle but just as effective. The result was a carefully orchestrated, fully realized theatrical vision that was the highlight of the season.

This expert quartet delivered a beautiful balanced display of assured, nuanced acting in the Palm Beach Dramaworks production of this Edward Albee play. As a vacationing couple dodging fears of aging and mortality, Felix found depths of honesty and simplicity, while Olsen radiated courage and joy. As a lizard couple from the sea, McKeever and Lowe made these implausible characters thoroughly believable.

Michael Polak for Take Me Out

Polak's startling performance as a homophobic baseball pitcher provided a welcome jolt of menace and unpredictability to the Caldwell Theatre drama. With a rough Southern drawl and a rangy, awkward physicality, Polak was thoroughly convincing as the play's gay-hating nemesis, who suffers a frightening nervous breakdown in a memorable second-act confrontation. We don't know when Polak will play our area again, but we hope it's soon and often.

Kim Ostrenko for The Gulf of Westchester

As a tightly coiled Republican suburbanite in conflict with her liberal houseguests, Ostrenko's underplayed performance added dimension and empathy to a rather shallow role. Filling in the character's silences with telling subtle behavior, Ostrenko beautifully revealed a conflicted, conventional woman afraid to discover her most profound feelings.

Tim Bennett and Thomas Salzman for Take Me Out