If New Times has talked too much about Pilar Uribe's year-old performance in Heather Raffo's 9 Parts of Desire, that's only because we haven't yet found anything better to talk about. The past year has seen the woman take on a more diverse and challenging array of roles than anybody in the state: she's been a neurotic talent agent, a stately professor who has both wronged her husband and been wronged by her paramour, a mother whose children were burned alive, an old beggar woman, a young girl who misses her dead father, a painter-cum-prostitute, a doctor horrified by a sudden glut of deformed babies showing up in her maternity ward, a Johnny Walker-swilling revolutionary forecasting doom for everybody, an American 20-something fearful for her relatives in a war-torn country overseas, a fat Bedouin, and a crazy street vendor. All but two of these roles came in 9 Parts, a one-woman show in which Uribe incarnated an array of diverse Iraqi women. Uribe's uncanny shapeshifting combined with the horrors in the women's stories made for a play that didn't seem quite real. One can't really believe that a woman working with few props besides a shawl could conjure a whole country in Mosaic's small auditorium, or that she could scare you as badly as she did. For all we know, the Latin American Uribe has no stake in our country's current war. But she made us feel ours.

There could have easily been a drop-off after his amazing 2005 solo debut, Needle Bed, but Lake Worth native John Ralston never succumbed to a sophomore slump. Instead, Ralston got to work immediately on what would become Sorry, Vampire, pairing up with ex-Wilco keyboardist/engineer Jay Bennett and even enlisting the vocal talents of fellow South Floridian Tim Yehezkely of the 2007 Best Album-winning the Postmarks. The result is a beautiful, endearing album that only gets better with each listen. Vampire is Ralston's dollhouse — a winding, orchestral journey through the talented songwriter's psyche, powered by a staggering array of instrumentation and layering. From the angst-ey drive of "Fragile" to the potent imagery of "When I Was a Bandage" (Little bits of cloud, go on and bite your lip/I was just a bandage when you lost your tourniquet), each track feels dense and full of detailed mystery, the aural equivalent of a Wes Anderson film. Ralston might be Florida's best songwriter. And if Vampire is any indication, he's only getting better.

Location may not be everything, but if you're an art gallery, you could do a lot worse than to be located at Gallery Center, Boca Raton's high-end mini-mall of seven individual galleries housed under one roof. On the down side, your competition is right next door. On the up side, anyone who wanders through the spacious Gallery Center complex is already likely to have art on the brain and thus be willing (and able) to shell out the equivalent of a year's salary for a prime work by a major artist. And if you're Habatat Galleries, there's the additional bonus of being the premier glass gallery in the entire region. The Boca outpost is part of a four-gallery chain that opened in Michigan in 1971 and has been focusing exclusively on glass since 1980. Along with hosting its own shows by such glass-world luminaries as Dale Chihuly, William Morris, and Dan Dailey, Habatat also curates exhibitions for museums and other institutions and offers a full line of consulting services for both experienced and novice collectors. Throw in the fact that Habatat recently presented the blown-glass orchids of Debora Moore — one of the best small shows of the season — and you've got a gallery that's first class in every regard.

Best Artist to Leave South Florida in the Past 12 Months

At first it seemed too good to be true — an artist the caliber of Enrique Martínez Celaya setting up shop in South Florida. Then settle he did, and not in Miami or South Beach or even Palm Beach, either, but in Delray Beach, of all places. The Cuban-born exile bought a residence and built a studio there, then got busy producing the kind of work that has made him a top-tier name in art centers all over the world. His spectacular studio complex quickly became a magnet for collectors, curators, writers, other artists, and especially the Art Basel Miami Beach crowd, which trekked up by the busload. It seemed that Martínez Celaya was on his way to achieving his dream of establishing an artists colony in Delray. But the city turned on him, putting paperwork and zoning obstacles in his way, and the romance soured, sending the artist and his family to Southern California. Martínez Celaya still maintains South Florida connections — at the Museum of Art/Fort Lauderdale and the Miami Museum of Art, in particular — but gone are the days when he called the place home.

Best Band To Break Up In The Last 12 Months

Way of The Groove

Way of The Groove was an amazing, mind-melting jazz-fusion combo. Sometimes their guitars sounded like hordes of evil alien insects; sometimes their drums sounded like a tribe of angry Africans. Always, their horns and keys were tasteful and smart, and their bass came at you with too many melodies and counter-melodies to think about at once. But the bass sound was no surprise: Way of The Groove was the band of Felix and Julius Pastorius — twin sons of the late, great Jaco — and they used to play every Wednesday at their dad's old pal's bar, Alligator Alley. Walking into a teeny bar on Commercial Boulevard and being suddenly accosted with what was almost certainly some of the best, most inventive jazz in the world was a quintessentially weird experience — one that no one who saw it will ever forget. 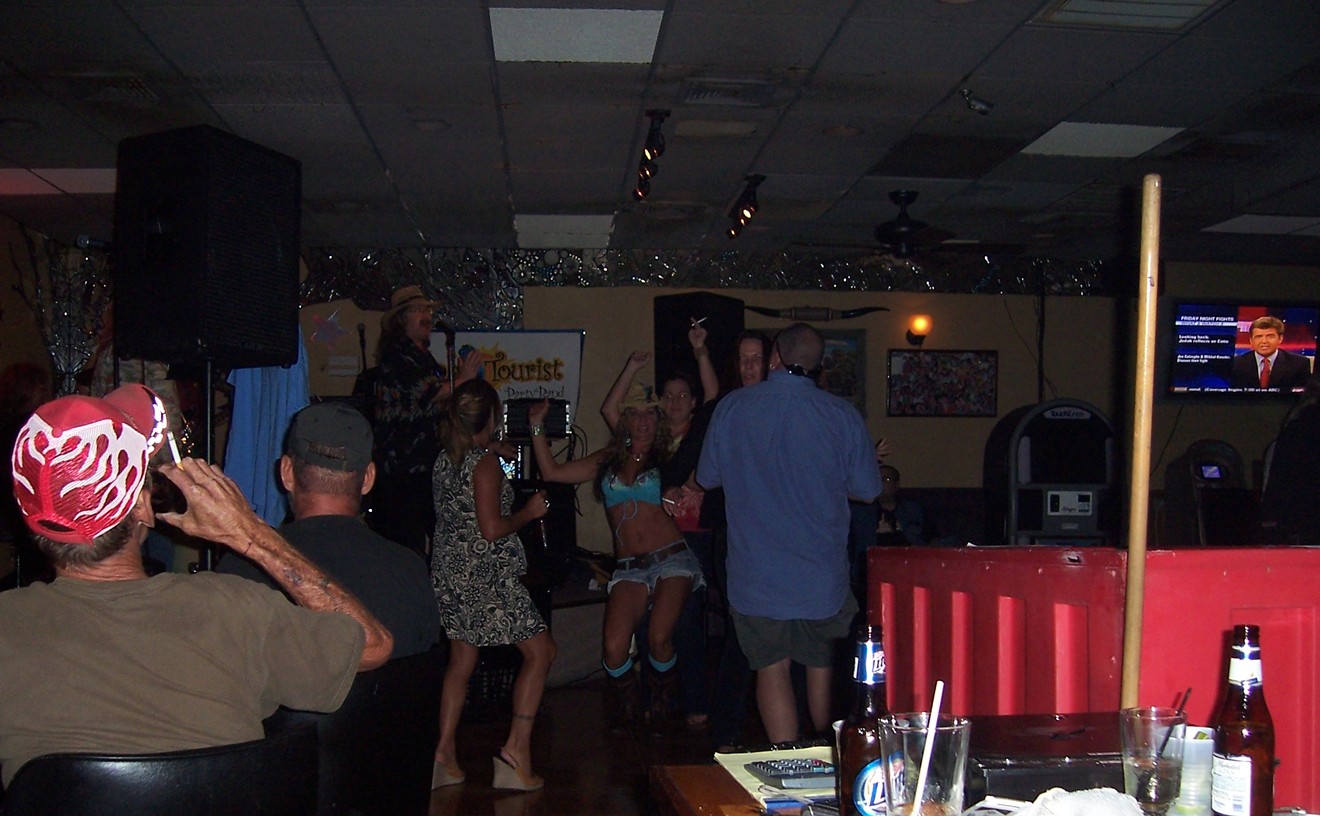 It might seem like all the cowboys have gotten the hell out of Dodge, but there are still a few country music holdouts in South Florida, like country cover band Shadow Creek, which gigs from Okeechobee down to Homestead. They have a loyal following of line dancers, too. A surefire way to catch Shadow Creek and get your two-step on is to drop by Texas Rose Saloon in Davie on Thursday nights, where the fellas usually take the stage at 8 p.m. You can count on at least one sing-along, as Shadow Creek does a raucous rendition of Hank Williams Jr.'s ode to drinkin' and smokin', "Family Tradition."

This paper wasn't very nice to The Fourth Wall. Essentially, we called it a beautiful, exciting failure. We were right, too. But The Fourth Wall was only a failure because its ambitions were so large, and raised our hopes to delirious, irrational heights. Now that we have some perspective, while we still wish writer A.R. Gurney had taken his own ideas a little more seriously, we can understand how stunningly those same ideas were realized by the folks at Palm Beach Dramaworks. The Fourth Wall was a show about citizenship and about holding oneself accountable to one's country and its yet-to-be generations. The metaphor was simple and perfect: in the play, to be a citizen was to be an actor. The Fourth Wall's protagonist was a woman who had torn the decorations from one of the walls of her living room — the fourth wall — and imagined that behind it lived an unseen audience who would judge her deeds. This is a heavy concept, but the humor, class, and pizzazz with which J. Barry Lewis brought it off made every deep idea come alive with showbiz sparkle. And so, although The Fourth Wall could be read as one of the most textually profound scripts produced in SoFla last year, it was actually funnier, and more fun, than just about any straight-up comedy the region had to offer. Good work, Mr. Lewis. More, please.

South Florida is a notoriously tough electronic market to break into because some of the world's greatest electronic artists call the area home. Standing out takes an assload of talent. How do you circumvent this? By being unique, not just as a DJ but as a producer, and learning to make a name for yourself in more areas than one. Hollywood's Ean Sugarman seems to be taking this approach: Not only is he in that core group of DJs who keep dance floors from West Palm to South Beach on fire, he's also a champion remixer/producer with Grammys and other plaques to prove it. He's the kind of producer whose remixes are more popular than the originals. That's why everyone from Enrique Iglesias to Nelly Furtado credits him with giving their songs new life on the electronic circuit. His productions are always soulful in the right places and build up enough surging energy that when the break hits, you can't help but dance or at least nod your head. Unlike a lot of DJs in the area, Sugarman is the type of electronic artist who knows how to deliver style and substance in person or on wax.

The Fourth Wall was a show with a special shine. Though dealing in very heavy material, actors Peter Thomasson, Angie Radosh, Patti Gardener, and Gregg Weiner honed in on the wittiest, craziest, and funniest lines and moods in A.R. Gurney's script and made them dance. The show could easily have been done at half the speed, or half the intensity, of PBD's production, and come off like an especially bizarre series of events in anybody's living room. But the weird glint in Angie Radosh's eye when she began singing along to a player-piano, the verve of Gregg Weiner's many windy proclamations, the nutso fear and determination in Patti Gardener's every posture, and the helpless hand-wringing of Peter Thomasson bespoke a strange, shared energy — everything they did was gonzo in just the right way, as though they'd each imported their personas from the same semi-sane alternate universe. Let's hope some smart director reunites these guys soon.

"Craig Kucia: many sundays were spent talking of rockets"Art and Culture Center of Hollywood Butterflies, cookies, tree stumps, and other diverse things cryptically appear amid tropical foliage in Craig Kucia's oil paintings, exhibited in a solo show at the Art and Culture Center of Hollywood last year. The Miami-based artist gave up none of his secrets in his all-lowercase titles for the paintings, ranging from "books talked to us as if seasons stayed the age of 12" to "when i begin to forget, tell me things i never knew" and "the best things are made on napkins." Normally we might expect the exhibition's title to put it all in perspective. Not a chance here. Who knows what "many sundays were spent talking of rockets" has to do with anything – and with art this enigmatic, who cares?