The Band in Heaven's EP

Scuzzy, fuzzy, psychedelic. You can use all of these words to describe the Band in Heaven's new four-track EP featuring A-side "Sleazy Dreams." The first 475 copies of this seven-inch were pressed in February by a garage, noise, psych, and punk underground label out of Chicago called HoZac Records. The band creates not so much celestial sounds but more like the cries of a fallen angel. The EP is dark and disorienting. It has an experimental heart with a dirty rock body. Play these songs when experiencing the freedom of riding your bike on a particularly sunny afternoon or while driving home late at night, getting ready to do very bad things. The Band in Heaven represents a larger movement of experimental psych sounds coming out of its hometown of West Palm Beach. Appearances at South by Southwest and Austin Psych Fest solidify it as an act on the brink of breaking, in the good way. Breaking outward and upward.

Best Band to Break Up

Just last year, the readers (that's you) chose the New as the best local band. The alt-pop outfit isn't done entirely, but a break from its label and a switched-up lineup leaves the New in the hands of lead singer and guitarist Lori Garrote, and in her hands alone. Her off-again, on-again bandmate is now officially no longer part of the pack. Currently, she's playing with breakout garage act Beach Day. Members Giz Forte and Jordan Calloway have also moved on. But no fear! Girl rock isn't dead. Garotte is working with the former manager of the Mavericks and Marilyn Manson, John Tovar. Garotte says of the fresh sound, "With the addition of keyboards and adding two more background vocals, it certainly started sounding more feminine and more harmonic." Who knows? Maybe the new the New will put the girl back in grrrl.

The Adventures in 8bit: Cartridge 1 by the Benchwarmers Clique

OK. Get stoned, sit back, press play, and try to figure out what videogames were sampled in each of the 12 tracks of the Benchwarmers Clique's The Adventures in 8bit: Cartridge 1. For so many — mostly stoners and boys, but in many ways for all of us — the first electronic music we listened to was the soundtrack to our videogames. Local hip-hoppers Joka Wild and Travisty the Lazy MC took these familiar sounds and, with the help of British producer Jewbei, created a sweet locus for nostalgia. This shit will access all those Nintendo dreams and Sega nightmares of your youth. Your old friends Super Mario and Zelda will return but with sick rhyming blanketing them. Besides the Benchwarmers Clique, guest MCs on the album include Melodik, Lex One, Llamabeats, Kyllabus, and Reks. Hopefully, a Cartridge Two hits the web before we crack the code on this Adventure in 8bit.

Like Jesus Christ himself, this festival has died, resurrected, and, unlike JC, died again. In 2003, the inaugural fest made us feel warm and fuzzy. In 2006, the event made us swoon with Florida musical lovin'. Just two years later, we were still gaga for Langerado, but in 2009, it died in the planning stages. In 2011, it looked like it was back, and we were feeling good about it. Our credit cards were out, and we were ready to buy our tickets and head up to Markham Park for some Death Cab, Ween, and Thievery Corp. But alas, before it began, it died again. We bid thee a solemn farewell, Langerado. Perhaps next year, we'll be able to welcome you back? But maybe that'd be a bit much. You can't break our hearts a third time. That would just be cruel.

For two consecutive days in April, Bryant Park in Lake Worth was as bright as could be with smiles, sunshine, and irie vibes. Ya mon! The inaugural Lake Worth Reggae Fest went off splendidly, bringing together a diverse crowd, stellar bands, and quality vendors for a weekend full of Jah-loving fun. Rastas coursed the scene as boomers relaxed in beach chairs sipping cold beer and little tykes blew bubbles, barefoot in the lawn. The seawall overlooking the Intracoastal was used as a pristine sideline bench, where festgoers took breaks from the action as well as lovely photos. Meanwhile, the stage was rocked by a strong lineup of reggae bands, ranging from local and regional up-and-comers like Deerfield's Resolvers and Gainesville's 3rd Stone to some of the most venerable elders in the reggae world, like Aston "Family Man" Barrett, who played bass for Bob Marley for many years and now anchors the current iteration of the Wailers. With so much sunshine and enthusiasm for reggae in South Florida, this was a festival waiting to happen, and it did not disappoint.

Last year, we spotted this crew of performers and teachers and declared them Best Nonprofit. The queens at Drag It Out aren't just hams in a lotta lipstick and heels; this is a caring group of motherly ladies and gents and gender nonspecifics. They teach the art of drag to young drag aficionados, mentoring and inspiring them. Their workshops are free, but the results are priceless. Participants enter rough around the edges and come out smooth as a bouffant. The "draguates" performing? It's fab-u-lous. Burgeoning drag kings and queens show off their new (or true) personalities in a safe and encouraging place. A sea of colored wigs and rhinestones, the room is filled with glamour, and it's all for charity. How can we not give it up for Drag It Out's Epic Draguation? It's called a draguation, for God's sake. 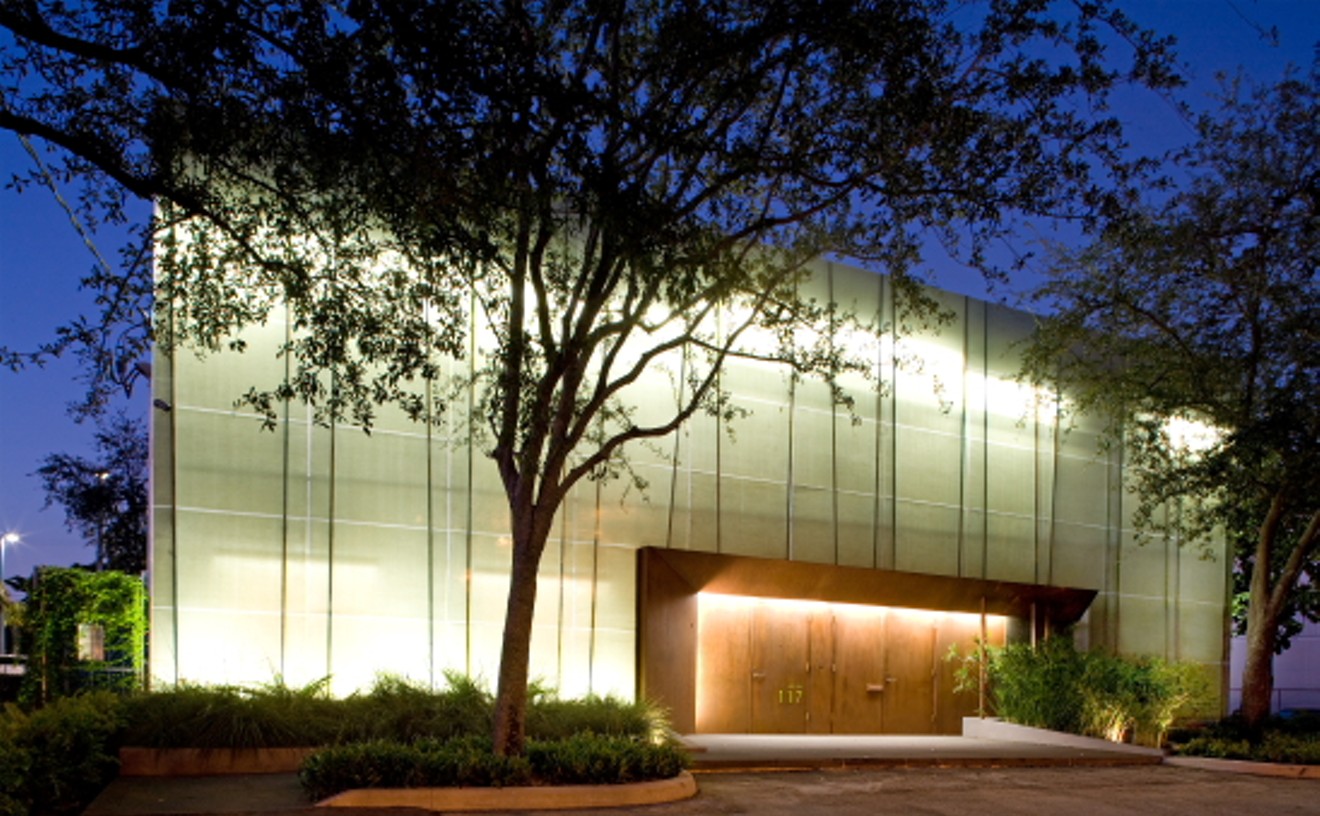 What's the sexiest area of a woman's body? Her brain. So where does one find a sexy female brain in the land of beaches and liposuction? The Girls' Club Collection is an art space created, curated, and managed by women featuring art photography by female artists. The gallery itself was designed by a female architect, and it shows in the grace of the angles and fluidity of the movable walls. Films by female filmmakers are screened. Workshops are held by female artists. So if you're looking for a woman of substance, attend the next event at the Girls' Club. But please, while all those sexy female brains might drive you to it, no wolf whistling. Smart girls don't like that.

"American Treasures: Masterworks From the Butler Institute of American Art"

Not to discount installation art or performance art or conceptual art or any other kind of art that has trended upward in recent years, but there are times when you just want to look at a bunch of paintings. For those times, there are shows like this one at the Boca Museum, made available to South Florida courtesy of Ohio's Butler Institute, which opened in 1919 as the country's first museum devoted exclusively to American art. The exhibition included only 36 works, but most of them were paintings that lived up to their billing as "masterworks." Where else, outside of a museum comparable to New York's Metropolitan, would you find a roll call that includes Edward Hopper, Robert Motherwell, Georgia O'Keeffe, Jackson Pollock, Andrew Wyeth, and Andy Warhol, to name but a few? Where else, indeed, would significant works by such major artists be overshadowed by paintings like Albert Bierstadt's The Oregon Trail and Thomas Cole's Italian Landscape, which almost stole the show?

With canvases measuring up to 16 feet by eight feet, British artist Jenny Saville's eponymous retrospective at the Norton was literally the biggest show of the year. But what really makes Saville's art big, aside from its sheer scale, is its emotional content. Her images of haunted, fleshy, sometimes physically battered faces speak to a culture that gorges on itself even as it registers the traumas of the postmodern world. It's no surprise that her work fit in perfectly at the Royal Academy of the Arts' landmark, controversial, 1997 show, "Sensation: Young British Artists From the Saatchi Collection" — Saville's paintings are both sensational, as in creating a sensation, and all about sensation, as in dealing with the senses. The large-scale emotions also extend to her pencil-and-charcoal drawings, which took up two galleries in the Norton exhibition and focused mostly on her mesmerizing obsession with a famous Leonardo da Vinci cartoon of the Virgin Mary, the baby Jesus, Saint Anne, and John the Baptist. Saville is only 42, so presumably there's much more to come.

"All Florida Juried Competition and Exhibition"

Sometimes the best shows sneak up on you, registering only faintly while you're still in the museum or gallery and then later coming together in your head as a cohesive whole. The Boca Museum's 60th-annual "All Florida" was such a show. First there's the scale of the exhibition to consider: 101 artists represented, out of the nearly 600 who submitted close to 2,000 works. That juror Valerie Ann Leeds — a veteran of the Orlando, Tampa, and Whitney museums — managed to make sense of it at all is no small wonder. Leeds, however, not only culled judiciously; she also found a common thread running through so much diverse work, in the form of what might be called "the Florida experience," or, as she memorably put it, "a collective response to the environment and the bounty of natural resources found within Florida's borders." By taking the "All Florida" designation seriously, she assembled a show that somehow encompassed the Sunshine State's past, present, and future.