Among the stellar bands that have rocked Voltaire in year one is Nashville's Thelma and the Sleaze. @jsphoto_official
One year ago, Voltaire entered the West Palm Beach scene with three concerts over a three-day span.

Now, to celebrate its first anniversary, the cozy WPB music hotspot will host a four-day string of live tunes. (At this pace, we will accept nothing less than a five-day spectacle next year, okay?)

Voltaire’s one-year anniversary week kicked off Thursday evening with sets by Zigterba, Donzii, Monster Teeth and DJ Lindsey Mills. As part of the celebration, the bar, rock venue, and wildly-delicious-sushi heaven will also host the likes of Mood Swing and The Ricca Project (Friday), Bashaum Stewart Trio and Michael Mayo (Saturday) and JM & the Sweets among many others (Sunday).

The venue opens at 8 p.m. for the duration of the festivities with no cover and complimentary cocktails (nightly until 11 p.m). As for what makes Voltaire so damn special, it’s a mix of things, according to bookings and marketing manager Steve Rullman.

“It’s a combination of the atmosphere, the entertainment curation, the craft cocktails and fresh sushi [that] separate Voltaire from any other spot in town,” he said. “[It’s] Clematis Street’s best kept secret.” 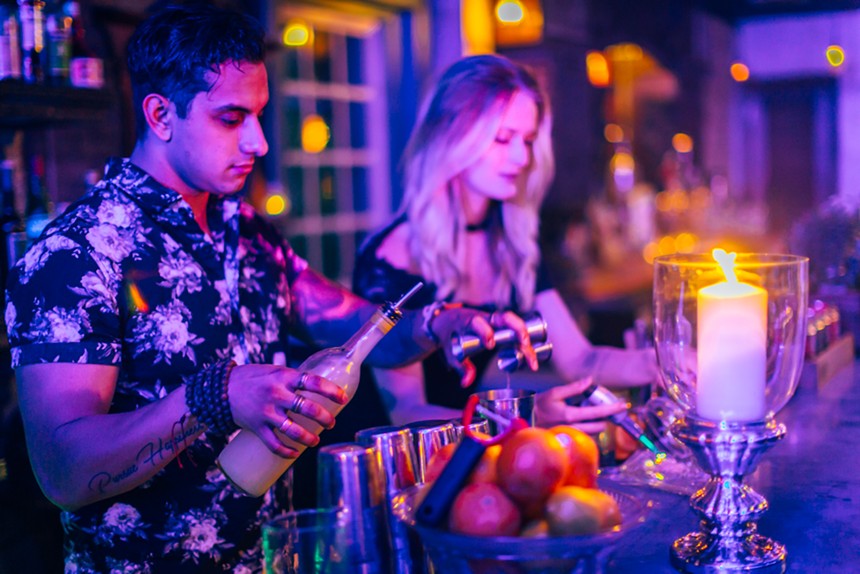 There's never a shortage of craft cocktail deliciousness at Voltaire.
Ates Isildak
In addition to hosting West Palm's best local bands during the course of their first year, Voltaire also booked some pretty stellar touring acts as well, including Sounds of Ceres, Holy Wave and Las Rosas, among others. Entering year two, the spot is showing no signs of slowing down.

“We are constantly seeking out ways to improve the experience,” added Rullman. “Voltaire is not looking to simply be another flash in the pan hotspot... here today, gone tomorrow. We care about the local music community and want to see it thrive. We are in it for the long-haul and for the right reasons.”

According to Rullman, among the confirmed acts set to hit Voltaire in the coming weeks are Spam Allstars, Swimm, The Mercury Program and the anticipated September 8 Bumblefest, featuring the likes of Scott Yoder, Gustaf and more than 30 other bands.

Voltaire's One-Year Anniversary Week. Beginning at 8 p.m. nightly Thursday through Sunday at Voltaire, 526 Clematis Street, West Palm Beach; sub-culture.org/voltaire. No cover during anniversary festivities. Complimentary drinks until 11 p.m.
KEEP NEW TIMES BROWARD-PALM BEACH FREE... Since we started New Times Broward-Palm Beach, it has been defined as the free, independent voice of South Florida, and we'd like to keep it that way. With local media under siege, it's more important than ever for us to rally support behind funding our local journalism. You can help by participating in our "I Support" program, allowing us to keep offering readers access to our incisive coverage of local news, food and culture with no paywalls.
Make a one-time donation today for as little as $1.