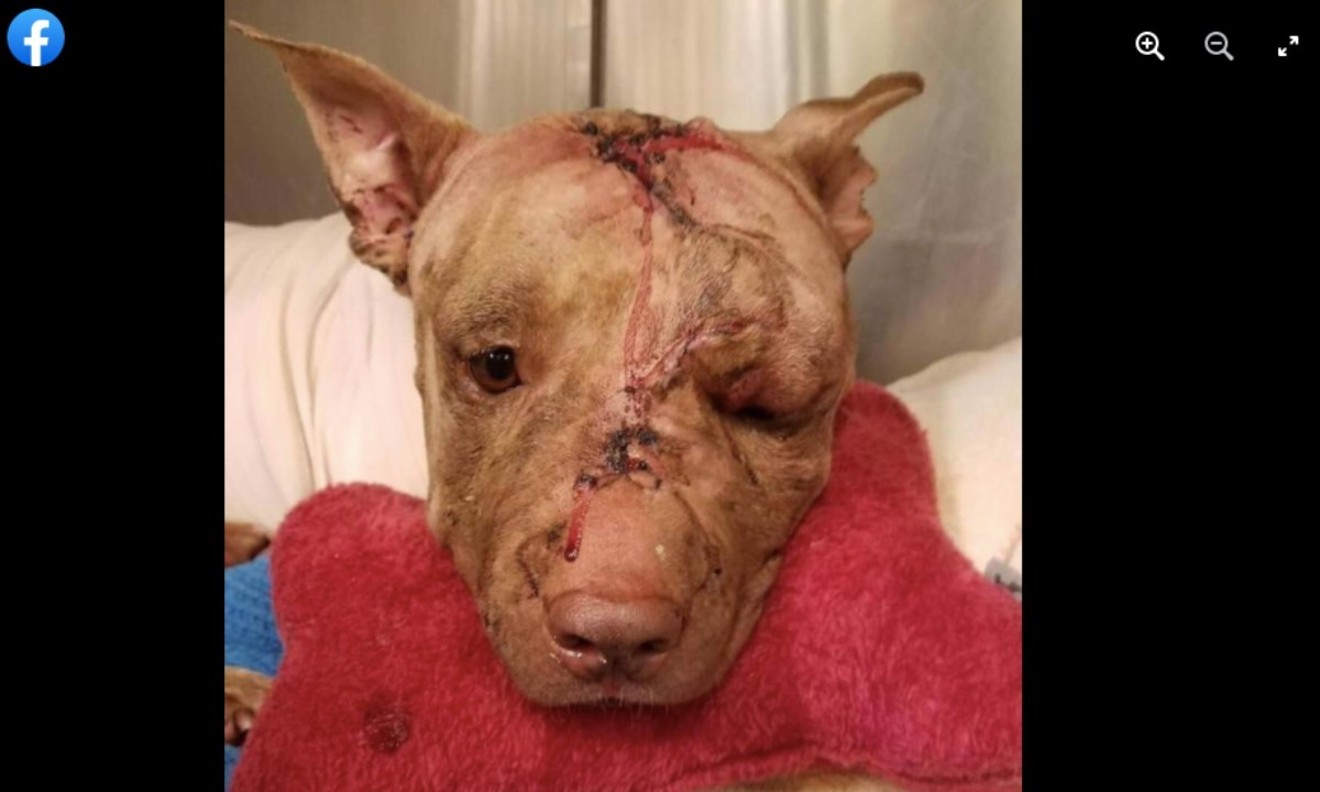 Ollie in a photo posted to the Justice for Ollie Facebook page shortly after the fatal attack in October of 2017. Screenshot via Justice for Ollie Facebook page
Capping a widely followed four-year saga, the man accused of stabbing a pit bull mix named Ollie more than 50 times, stuffing him in a suitcase, and leaving him for dead in Hollywood has reached a plea deal with prosecutors — an outcome that has outraged animal-rights activists near and far.

On Tuesday, Brendan Evans agreed to plead guilty to two of the 17 animal-cruelty charges filed against him, in exchange for a ten-year prison sentence. The remaining charges were dropped, his attorney, Michael Gottlieb, confirms to New Times. As part of the agreement, Evans will get credit for the time he has served in jail to date (about four years) and serve out the remaining six years in a Florida prison.

Though Evans' sentence is in line with Florida statutes — a conviction for animal cruelty is punishable with a fine of up to $10,000 and/or five years in prison — impassioned activists and community members who have grieved Ollie's killing for the past four years call the outcome a miscarriage of justice.

"This person belongs in jail for the rest of his life," Sheryl Fordin, an administrator of the Justice for Ollie Facebook group, tells New Times. "Although we weren't the ones stabbed, our hearts will never heal from this case."


In October of 2017, the case drew significant media attention across the nation, prompting hundreds to offer to adopt Ollie, who had endured stab wounds and trauma across most of his body. Though the year-old pit bull mix was found by passersby and taken to an animal hospital, he died of his injuries two days later.

"We knew that we had to be a part of making sure that this individual never did this again. So we got a group together and we made fliers," Fordin says, adding that the fliers were laminated to be sure they didn't deteriorate from rain and weather. "We had a posse of people walking and driving the neighborhood."

Fordin and her group of fellow advocates and well-wishers ultimately helped raise $65,000 via an online effort to help solicit tips that would lead to an arrest.

It didn't take long. About a month after Ollie's death, on November 14, Hollywood police searched Evans' residence. Inside they found a freezer containing mutilated rodent body parts, an oven coated in dried blood and animal fur, bloodstains on a shower curtain and toilet, a machete, and two knives, one of which was covered in blood and fur, the Sun Sentinel reported at the time.

They also found a note: "Make the entire pit bull investigation go away. Return all curses placed on Brendan to their sender. Give Brendan peace of mind."

After investigators identified Evans' fingerprints on the suitcase in which Ollie was discovered, he was arrested and has remained in jail pending trial.

"I personally feel there was a significant factor played by his mental-health problems," Gottlieb says.

The macabre details surrounding Ollie's killing has left an unshakable impression on those who rushed to advocate for the dog. The Facebook group, which has more than 7,100 members, has become a tight-knit community of animal lovers and advocates who bonded over the tragedy and became emboldened to defend other animals that suffer abuse.

"For those that still follow the Justice for Ollie page, it'll never go away," Fordin says.

After hearing news of Evans' plea and prison sentence, Fordin says she and the other advocates couldn't help but feel dejected.

Fordin, who moved from Hollywood to New Jersey two years ago, says she still thinks about the lacerations that covered the dog's body when he was found. She says there will always be work to be done.

"We are bonded by Ollie and although I'm not in Florida anymore, we will seek justice for any animal that we find to have been abused, tortured, and killed," she says.
KEEP NEW TIMES BROWARD-PALM BEACH FREE... Since we started New Times Broward-Palm Beach, it has been defined as the free, independent voice of South Florida, and we'd like to keep it that way. With local media under siege, it's more important than ever for us to rally support behind funding our local journalism. You can help by participating in our "I Support" program, allowing us to keep offering readers access to our incisive coverage of local news, food and culture with no paywalls.
Make a one-time donation today for as little as $1.