Trainers Pete (left) and Oscar (right) with their dogs, Gauge and Duke Photos courtesy of Magic City K9
On his graduation day, Gordon, an 80-pound Labrador with big brown eyes, ate bacon-flavored treats and whipped his tail excitedly as a dozen incarcerated men and prison officials stood around him cheering. Other dogs in the gunmetal-gray cellblock played with rubber chew toys while prisoners cleaned their kennels. A correctional officer looked on, amused.

Gordon was one of eight rescue dogs living at the Everglades Correctional Institution (ECI) in West Miami-Dade County and the latest graduate of a program run by Magic City K9, a Miami-based nonprofit that trains incarcerated people to prepare dogs for adoption.

Magic City K9's director, Dee Hoult, is a certified dog-behavior consultant with 12 years' experience working with incarcerated men. In 2017, she brought her pilot program to the Everglades Re-Entry Center, a neighboring prison that currently houses twelve dogs, and it expanded to ECI in 2019.

"My purpose has always been to be a cheerleader for those who have no one," Hoult says. "Working with these guys is rewarding, and the dogs are very happy."

Magic City K9 rescues dogs that are facing a dismal fate: euthanization. The animals come almost exclusively from municipal shelters in Miami-Dade and Palm Beach counties. Hoult goes into the shelters herself to select the dogs best-suited for the program — usually the unruly and hyper ones in need of extra attention and discipline. It’s important to Hoult that they aren’t puppies or purpose-bred animals.

"There aren’t, in my opinion, enough programs with shelter dogs, especially here in South Florida," she says, in regard to other prison-training initiatives.

Once the dogs come to ECI, they live in a designated cellblock where wide kennels sit inside two-man cells. Each dog has a fleece bed on the floor and sleeps securely next to its trainer and handler. The trainers are responsible for round-the-clock care of the dogs, including outdoor walks, feeding, and obedience training. The handlers, who are newer to the work, help out while gaining experience.

"When the dogs first get here, they're aggressive or scared," says Scott Turner, a lead trainer for the program. "But after getting constant love and affection, their temperament usually changes."

On the day I visited, several men lay on the tile floor of the cellblock playing with Flyer, a Kooikerhondje mix, and Max, a pit bull terrier. They were both very friendly. But across the room, I was immediately drawn to Orchid, a beautiful, 3-year-old black German shepherd with her head on the ground and emotive eyes staring up at me.

I walked over and held out my hand for her to sniff. She sat up to lick my fingers in approval. Growing up with golden retrievers running around my family’s yard, I'd learned about the love between people and their dogs. Seeing Orchid reminded me that we can better understand something about ourselves by thinking about why we want pets around. 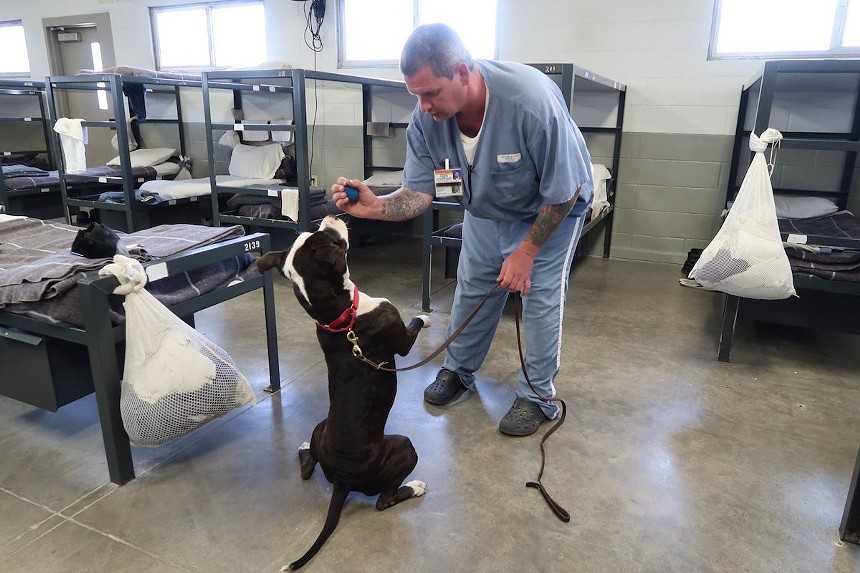 Some people worry about the well-being of dogs being trained by incarcerated men. When I told an animal-loving relative about some new puppies at ECI, she asked if they were being cared for properly. Aspiring trainers apply for a spot in Magic City K9 and then are carefully vetted by ECI’s senior classification officer, Donna Watson, who looks at their disciplinary records, among other things.

"After an initial interview, we accept trainees under a 90-day probation period," says Watson, who oversees the program's daily operations.

Once the men have been cleared, the long process of becoming certified begins. In order to graduate, the dogs must work their way up a four-level module, starting with basics like feeding, grooming, and leash walking, and followed by commands such as "sit," "stay," and "come." Over a period of 18 months, performance tests are administered to monitor their progress.

Scott Turner and Christopher Herr are both advanced trainers, the highest tier in the program. After completing the 4,000-hour course and mastering the required skills, they can not only train service dogs but also mentor other trainers, including Keith Jones, a basic trainer with four years remaining on his sentence.

Jones wanted to participate in the dog-training program in the hopes it would help boost his résumé. "Earning this certificate adds to the positive things I've accomplished while in prison," he says. "An employer will look at how I spent my time inside."

Research suggests that the companionship of animals can help lower stress — a crucial factor for people living in a prison environment.
Photos courtesy of Magic City K9

The Mutual Rehabilitation of Men and Dogs

Rescue dogs like Face, a 100-pound Dogo Argentino, would have been killed if they hadn’t been moved to ECI. Analogously, Magic City K9 gives second chances to incarcerated men who are seeking a new lease on life. The program encourages trainers to become more responsible and helps prepare them to re-enter society.

The trainers come from diverse backgrounds: retired gang members, entrepreneurs, carpenters, ex-thieves, and chefs. Some are recovering drug addicts who only focused on themselves — until having to take care of a dependent animal. Others are career criminals who’d never committed to anything before entering the program. And some men just never had the confidence or opportunity to pursue something as difficult and worthwhile as training rescue animals. They come from different backgrounds, ethnicities, and religions. They might be enemies at other prisons, but at ECI they live together with a common goal: taking care of the dogs.

Herr says using positive reinforcement to train the animals has taught him to be less negative. "I have anger issues," he admits, "and caring for these dogs helps me be patient with people."

Psychiatrist Aaron Katcher and veterinarian Alan M. Beck have studied how our relationships with dogs can be as intense as those with our fellow humans. "We talk to our pets as if they were people," they write in their book Between Pets and People, first published in 1983. "Someone living with a pet is living with a family."

Research also suggests that the companionship of animals can help lower stress, a crucial factor for people living in a prison environment. It's common for incarcerated people to feel emotionally neglected, but training a rescue dog can build a meaningful connection. "These dogs rehabilitate us as much as we do them," says Turner. "I'm a much happier person now."

Magic City K9 isn’t unique; prison dog-training programs have been around for decades, and according to a 2017 study, there are almost 300 of them across the U.S. But one thing that sets this program apart is its open-ended approach: Hoult likes to see how the dogs behave and what they do before determining where they’ll end up, whether as a pet, service animal, or drug sniffer. So far, she and the trainers have saved more than 200 animals from euthanization.

Most of the dogs wind up being adopted by families — like Steel, an 85-pound blue merle pit bull who was the sixth dog Turner trained, and his favorite. "He was intimidating but sweet, and I spent a lot of time working with him on commands," Turner recalls.

After leaving the program, Steel was placed in a home with two young children. The owner later sent an update, saying that the dog was obedient and friendly: "Steel's fantastic!.... As a father my number one priority is safety, but my children and partner LOVE him."

"Every time an obedient canine leaves for a new home and their adoptive family, it's a testament to the hard work and dedication of men who have not always done things right," Hoult says. "Everyone deserves a second chance."

Still, if finding a loving home is the ultimate goal, that doesn't make it easy for the program’s participants when a dog graduates.

Turner still remembers how bittersweet it was to walk Steel to the visitation area on the day he left for his new home.

"I said goodbye outside in the grass, and Ms. Hoult walked Steel to the door. He turned back and ran to me and jumped into my arms, playing and wrestling," Turner says. "It was really hard for both of us. I never felt like that before."

Ryan M. Moser is an award-winning writer and recovering addict from Philadelphia serving eight years in the Florida DOC for property crimes. Nominated for a Pushcart Prize and Best of the Net 2020, Moser has been published in many literary journals and on multiple news sites.
KEEP NEW TIMES BROWARD-PALM BEACH FREE... Since we started New Times Broward-Palm Beach, it has been defined as the free, independent voice of South Florida, and we'd like to keep it that way. With local media under siege, it's more important than ever for us to rally support behind funding our local journalism. You can help by participating in our "I Support" program, allowing us to keep offering readers access to our incisive coverage of local news, food and culture with no paywalls.
Make a one-time donation today for as little as $1.