Melissa Ashley Photography
American Craft Aleworks — an atmospheric gastropub, brewery, and full bar that pays homage to the Prohibition and speakeasy era — debuted last week at the site of the former Bar Louie on the intersection of Narcissus Avenue and Clematis Street.

The 7,000-square-foot spot occupies the bottom two floors of the historic Citizen's Building, built in 1923, and houses two full bars, a brewery, and a lounge. The speakeasy-style interior is adorned with Chicago bricks, ironwork, communal tables, red metal chairs, and Prohibition-era artwork, including a wall-sized image of Clematis Street from the early 1920s.

Rich Simon, a Chicago native who's owned and managed restaurants in the Fort Lauderdale area for more than 20 years, including TacoCraft and Pizza Craft, teamed up with Franklin Villarroel from Rok Brgr and Shooters to create what he says is an all-inclusive concept. "We wanted to bring together elements you normally don't find under one roof. If you go to a bar, it won't have a brewery. A brewery won't have cocktails, and a bar won't offer a curated menu we do," says Simon.

Head brewer Erik Miller, who crafts original suds on a ten-barrel system, says he mines inspiration from different time periods to create the flavors in each brew. The result is a mix of fresh crisp lagers, porters, hazy IPAs, and fruited Berliners.

"We are combining the new trends with old styles like English-style pub beers not often featured at craft breweries," he says. "I believe a good brewery should have a balance of the new offerings... but also pay homage to beers that have stood the test of time." 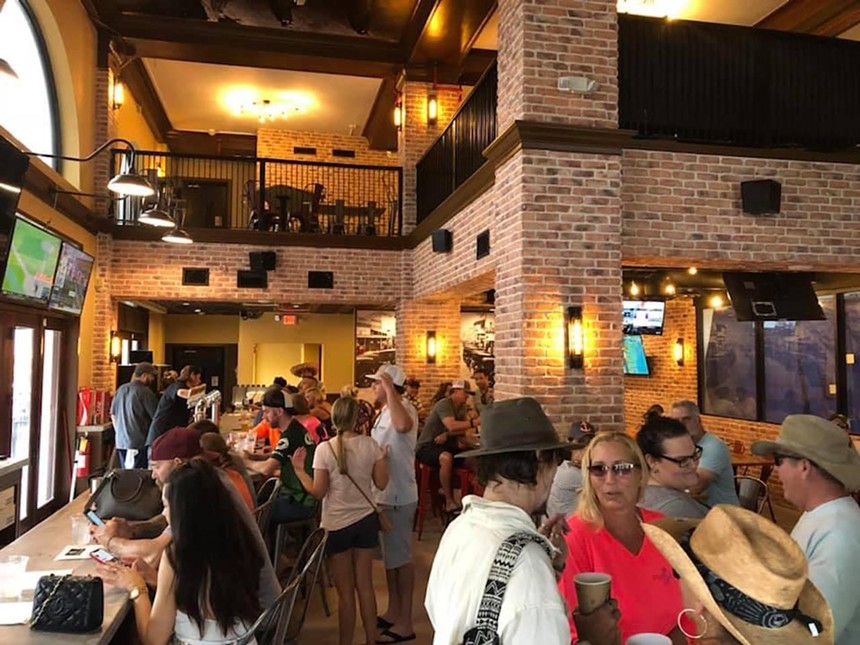 Dinner and lunch options include a variety of salads along with entrees such as the signature burger with gorgonzola, gruyere, arugula, secret sauce, and brioche bun ($14), beet-pickled deviled eggs with cured salmon ($8), whiskey-glazed salmon with crispy smashed fingerling potatoes and broccolini ($22), and bone-in pork chop with sweet potatoes, collard greens, and smoked apple butter ($19). For dessert, there's pecan pie cheesecake ($6) and the Empire Float with vanilla ice cream on Empire stout ($7).

The list of libations also features a wine program and ten craft cocktails, each priced at $13. Highlights include the Little Miss Mary made with Grey Goose, hibiscus syrup, lime juice, coconut cream, heavy cream, and vanilla cream soda; the Bathtub Gin with Sipsmith gin, lemon juice, cucumber, and prosecco; and the 18th Amendment with blackened rye, apricot preserves, and Angostura bitters ($13 each).

The upstairs lounge offers a variety of entertainment, including live music and DJs, trivia, and vintage video games. Outside seating is planned once construction work concludes on Clematis Street.

American Craft Aleworks. 200 Clematis St., West Palm Beach; 561-425-5799; americancraftaleworks.com. Open 11 a.m. to midnight Monday through Wednesday, 11 a.m. to 2 a.m. Thursday, 11 a.m. to 4 a.m. Friday and Saturday, and 11 a.m. to 10 p.m. Sunday.
KEEP NEW TIMES BROWARD-PALM BEACH FREE... Since we started New Times Broward-Palm Beach, it has been defined as the free, independent voice of South Florida, and we'd like to keep it that way. With local media under siege, it's more important than ever for us to rally support behind funding our local journalism. You can help by participating in our "I Support" program, allowing us to keep offering readers access to our incisive coverage of local news, food and culture with no paywalls.
Make a one-time donation today for as little as $1.
Juliana Accioly
Contact: Juliana Accioly