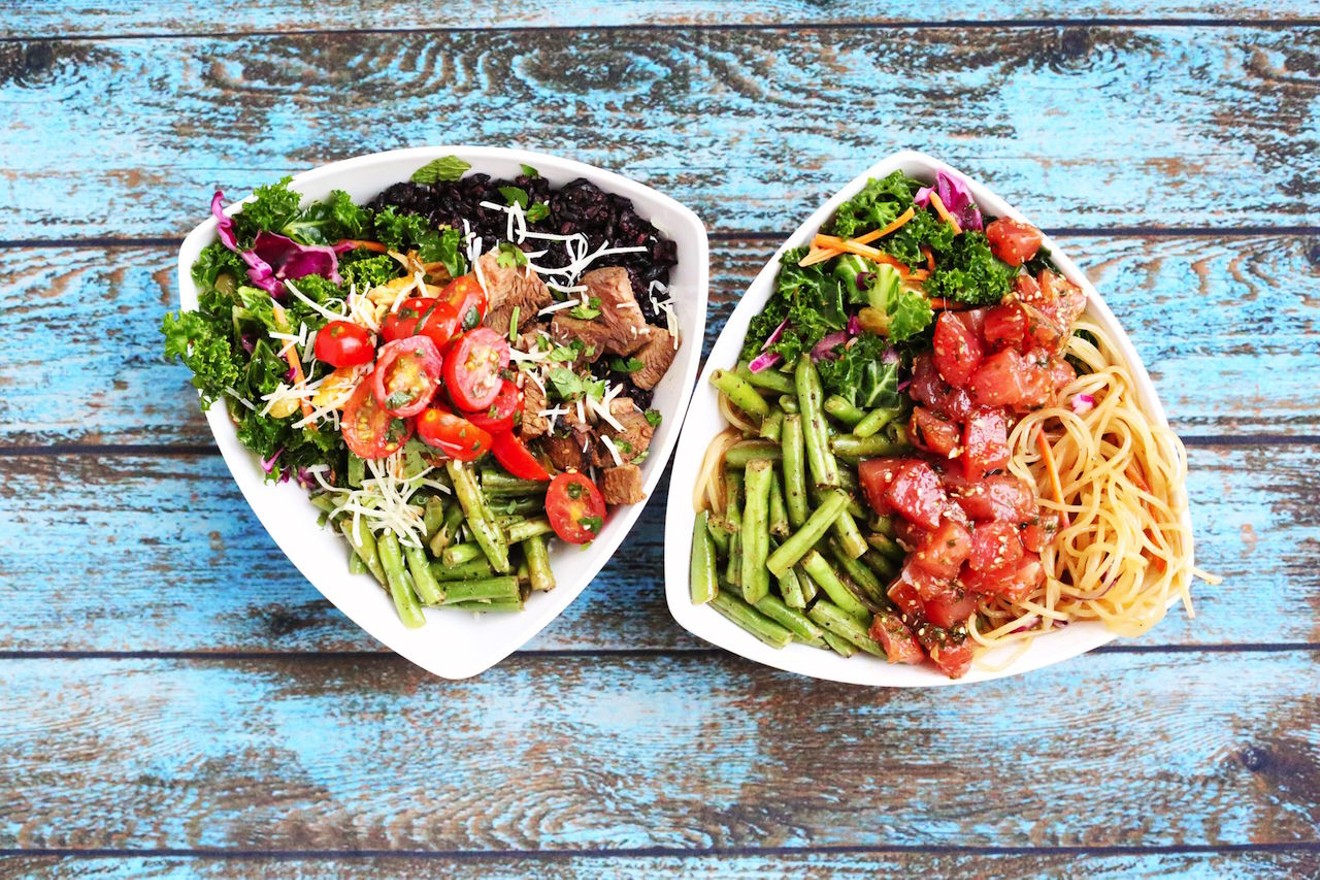 Courtesy of Bolay
At Bolay, you could start your meal with a base of Asian sweet potato or cilantro noodles, forbidden black rice, or Peruvian quinoa. Then you can add veggies like smoky cauliflower or ginger broccoli, and top it all off with a protein option, from pork tenderloin to miso glazed tofu. It's all part of a health-conscious, nutritious menu that is now also gluten-free certified.

Bolay is the first fast-casual restaurant in the state to achieve the Gluten-Free Food Service certification, which provides consumers with the assurance of safe preparations and handling of a 100 percent gluten-free fare. The certification was awarded by the Gluten Intolerance Group of North America, after a six-month process.

"We wanted a third party to give us a stamp of approval on our hard work," says owner Chris Gannon, who created Bolay with his father, Tim Gannon, the co-founder of Outback Steakhouse. "In the process we learned things that restaurants might overlook, like the need to trace back and study all sub-ingredients used so you are compliant across-the-board."

The result is an easy-to-navigate lunch and dinner menu that is light, modern, and affordable, with new takes on the healthy bowl concept. Customers place their orders at the central counter and can watch their meal get prepared. "We serve fine food in a fast environment," Gannon says.

Bolay started with Gannon making cold-press juices at a mini-kitchen he set up in his home garage. In 2016, he opened its first location in Wellington, and less than three years later, there are several branches across Florida, in Boca Raton, Gainesville, Orlando, Palm Beach Gardens, Pembroke Pines, Royal Palm Beach, West Palm Beach, and Lake Nona.

The demand for gluten-free fare is hugely popular, Gannon explains, because while many diners suffer from gluten-insensitivity or celiac disease, others are simply avoiding it because they feel better. For those with the autoimmune condition, eating gluten — a protein found in rye, barley and all types of wheat — can damage the lining of the small intestine and cause symptoms like bloating, abdominal pain, and even ulcers. But for those who aren't intolerant, gluten can simply be hard to digest.

Courtesy of Bolay
But it's not just dietary restrictions that the eatery's menu was designed for, he adds. The idea was always to fuse nutrient-dense foods with vibrant flavors and to open up to a variety of cookery. Gannon has called on chefs all over the country to design a wide range of special sauces, which help compose adaptations that are a break with the traditional view of gluten-free food. "Our job is to make people happy, and we wanted to find ways to make those types of food exciting," he explains. "It is more expensive to do and more difficult to source, but nobody else is doing what we do."

The menu is complemented by a great selection of cold-pressed juices, including the Gatsby Gatsby with kale, pineapple, green apple, and lemon, and the Berry Gold, with strawberry, sweet beets, pear, lime, and chia ($5.99 each). squeezed juices are $3.99 and brewed teas are also offered, along with all natural soda options ($2.39 each). For dessert, Bolay serves savory chocolate chip and snickerdoodle cookies made with tapioca flour ($1.49).

Gannon plans to continue its Florida expansion with six new locations slated to open in Miami-Dade in the next year. "I grew up with Outback," says Gannon. "I ventured out but something pulled me back in. There's something magical about the restaurant business, the idea of making people happy and fueling them so they can get through the day. It has become a real passion."

Bolay. Various locations. Open from 11 a.m. to 9:30 p.m. Monday through Saturday and 11 a.m. to 9 p.m. on Sundays. bolay.com.
KEEP NEW TIMES BROWARD-PALM BEACH FREE... Since we started New Times Broward-Palm Beach, it has been defined as the free, independent voice of South Florida, and we'd like to keep it that way. With local media under siege, it's more important than ever for us to rally support behind funding our local journalism. You can help by participating in our "I Support" program, allowing us to keep offering readers access to our incisive coverage of local news, food and culture with no paywalls.
Make a one-time donation today for as little as $1.
Juliana Accioly
Contact: Juliana Accioly