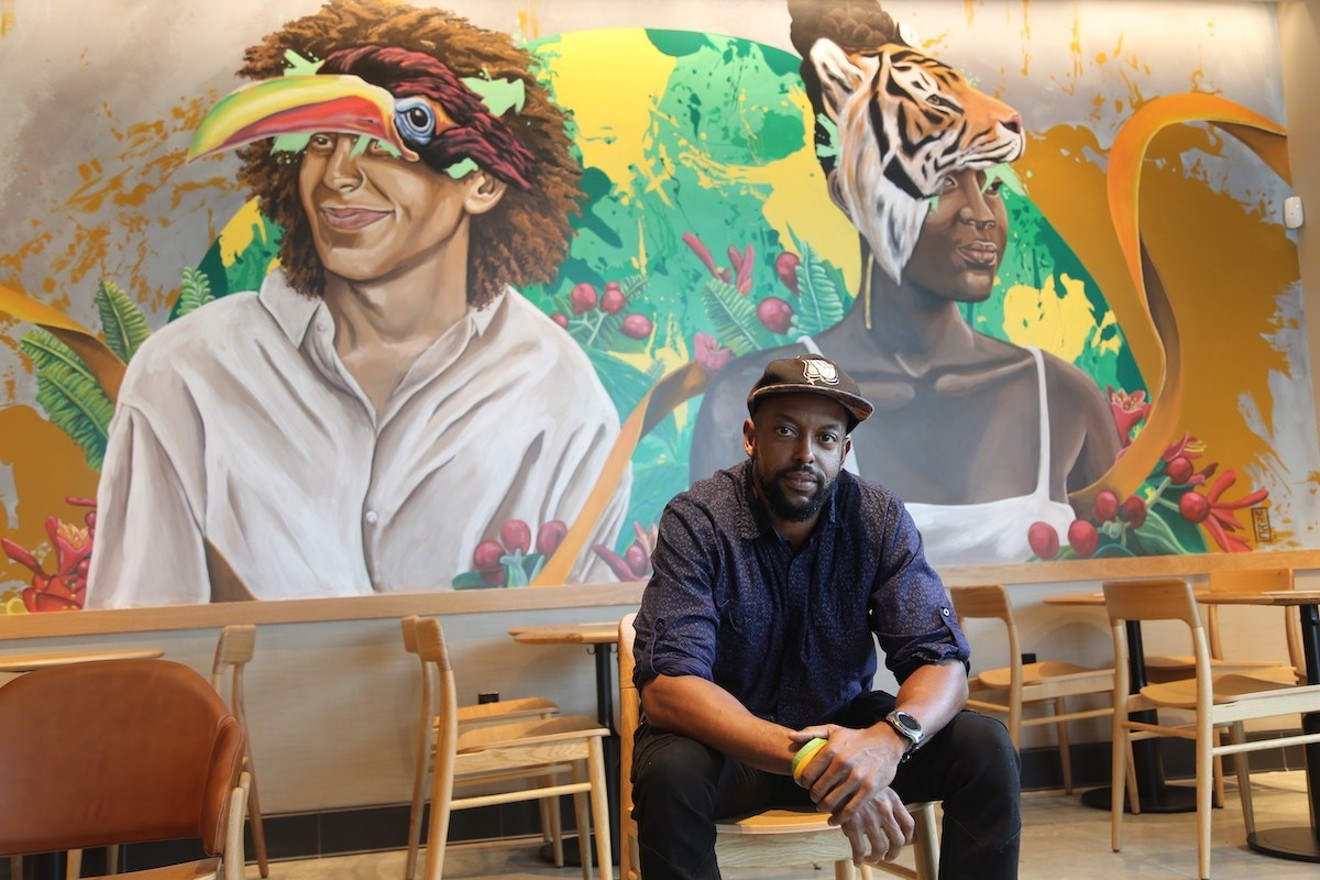 Artist Nate Dee with the mural he painted inside the new Starbucks Community Store in Fort Lauderdale. Photo courtesy of Starbucks
Starbucks is making headlines across the nation as its baristas unionize. But at the corporate level, the Seattle-based caffeinator-to-the-world is doing some community building of its own.

Take the new Starbucks at 2890 W. Broward Blvd. in Fort Lauderdale. The fast-casual coffeehouse, which opened in mid-March, looks a lot like most new Starbucks stores. It's draped in wood paneling and outfitted with towering glass windows. Newly planted trees surround a front patio emblazoned with the company's unmistakable green mermaid logo, and a huge wraparound drive-thru lane allows drivers to skip the store for their caffeine fix.

Before opening a store, Starbucks says, it recruits diverse, local contractors to construct it.

The Broward Boulevard store was built by BRV, a construction company owned by a Black woman. (BRV also built the Starbucks Miami Gardens Community Store, which opened in 2017.)

The company then seeks to hire hyper-locally — in this case, according to the company, 25 jobs were created. Starbucks also features artwork by local artists in its community stores and partners with local organizations and charities.

“In order to scale this program in a way that provides the greatest value to its communities, Starbucks is partnering with Measure of America to leverage the Human Development Index to inform where and how Starbucks expands these stores to better serve vulnerable communities across the country,” a company spokesperson tells New Times.

At the Broward Boulevard spot, the community-store vision equates to a massive, colorful mural by South Florida artist Nate Dee, showcasing symbols of unity, the artist’s Haitian heritage, and animals native to the countries where Starbucks sources its beans.

On another wood-paneled wall, a statement reads, “Let’s work together. Let’s grow stronger. Let’s build on the love that’s already here. This community store is dedicated to this neighborhood.” Nearby, a dedication statement is rendered in English, Spanish, and Creole.

Additionally, Starbucks has partnered with United Way of Broward County, local police and fire departments, Hope South Florida and the Hosanna Corporation, with promises of collaborative programming down the line with this location. 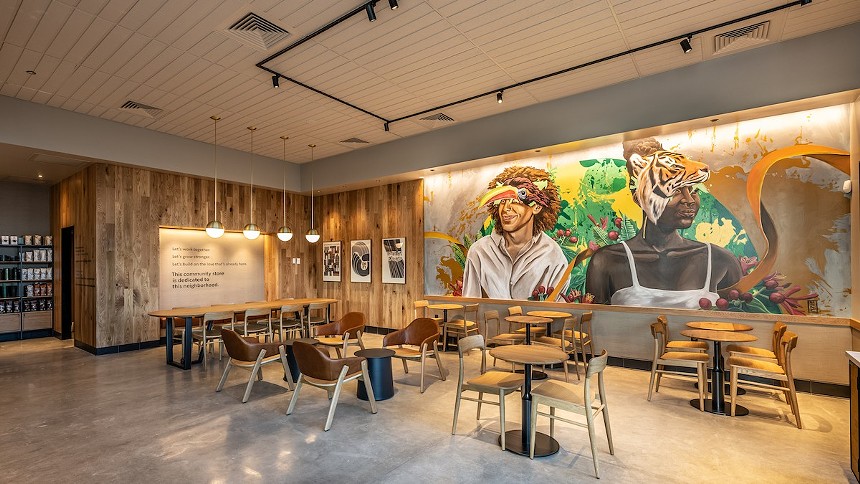 The modern-meets-artsy interior of Starbucks' new Community Store in Fort Lauderdale, which opened in March 2022
Courtesy Starbucks
“This Fort Lauderdale community store, in all of the partnerships it represents, is what it truly means to bring our Starbucks mission and values to life,” the Starbucks spokesperson notes. As for its next South Florida move: “We continually evaluate our store portfolio as a regular course of business so we can determine where and how Starbucks can make an impact for vulnerable communities across the country.”

Starbucks Fort Lauderdale Community Store. 2890 W. Broward Blvd., Fort Lauderdale; 954-902-4171; starbucks.com. Open daily from 7 a.m. to 5 p.m.
KEEP NEW TIMES BROWARD-PALM BEACH FREE... Since we started New Times Broward-Palm Beach, it has been defined as the free, independent voice of South Florida, and we'd like to keep it that way. With local media under siege, it's more important than ever for us to rally support behind funding our local journalism. You can help by participating in our "I Support" program, allowing us to keep offering readers access to our incisive coverage of local news, food and culture with no paywalls.
Make a one-time donation today for as little as $1.