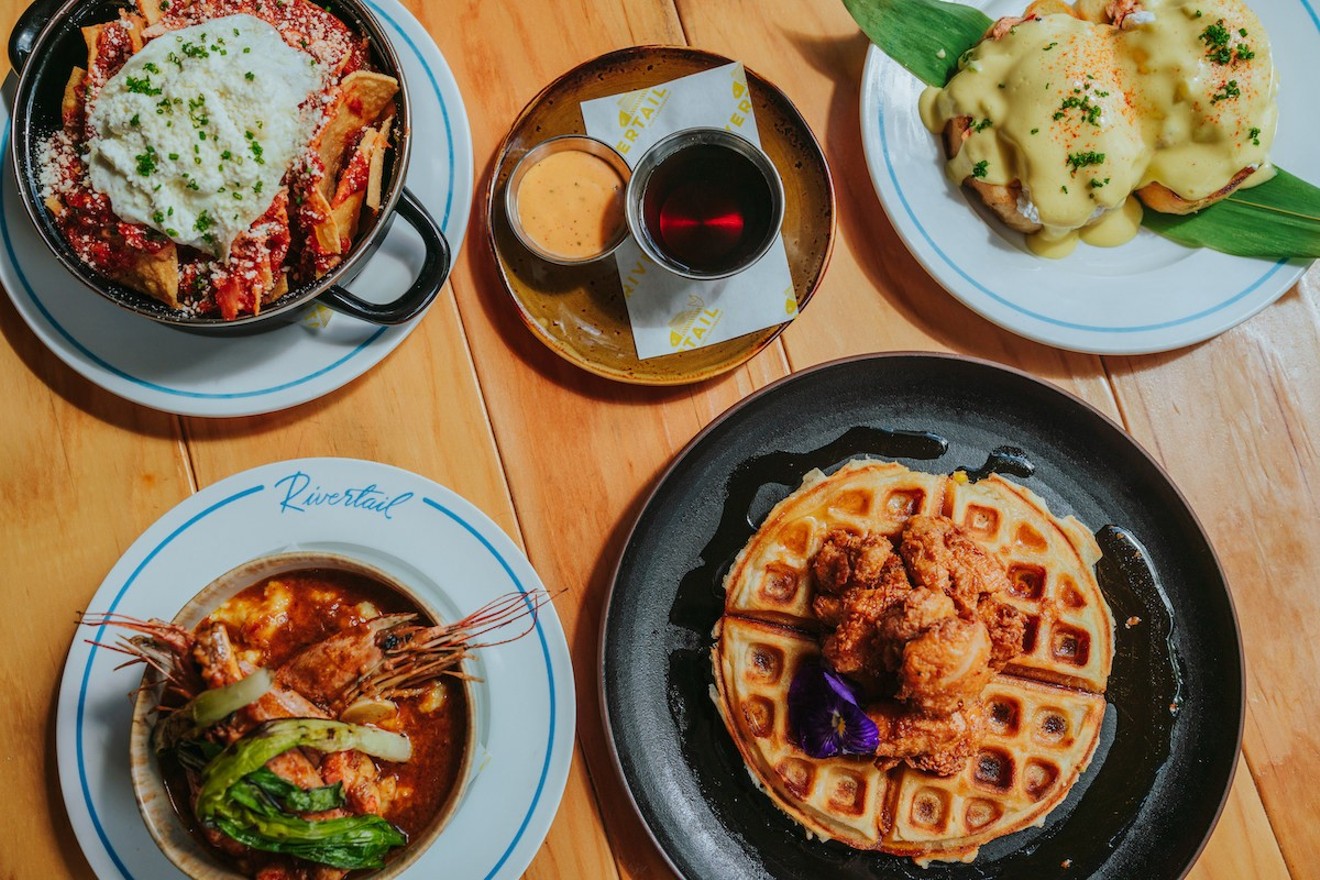 Rivertail's brunch is one example of the goodness that awaits in Fort Lauderdale. Photo courtesy of Breakwater Hospitality Group

Amid a pandemic that has lingered for far too long, Fort Lauderdale restaurants are finding ways to persevere and inspire.

There's no better way to experience find dining than with a side of sun and fresh air. Thankfully, Fort Lauderdale restaurants offer beautiful patios — many with beach or river views.

If you're looking for a new place to try, here, in alphabetical order, are the ten best restaurants in Fort Lauderdale that offer outdoor seating and delicious fare. 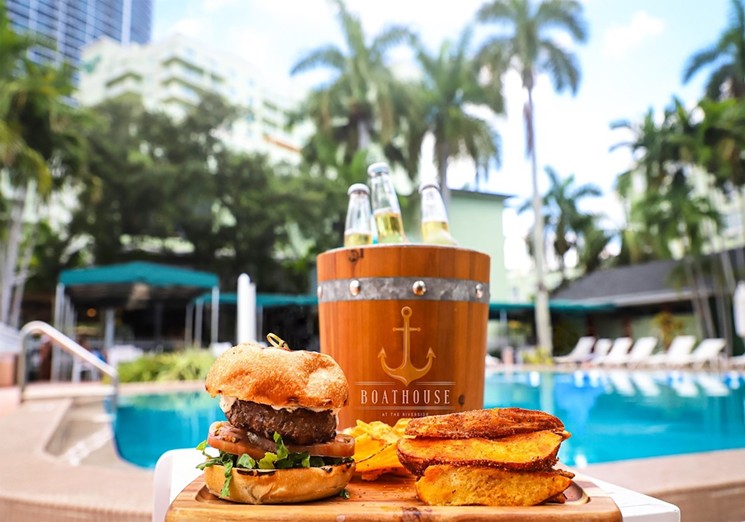 Boathouse at the Riverside Hotel

620 SE Fourth St., Fort Lauderdale
954-377-5494
boathouseriverside.com
This waterside spot in the heart of downtown Fort Lauderdale is not brand new. In fact, in March 2021, it will celebrate its three-year anniversary. Amid the pandemic, Boathouse at Riverside has become the go-to, open-air haven for unwinding as boats cruise by on the New River. In addition to its all-you-can-eat mussels for $25 every day, and a half-off daily happy hour from 4-6:30 p.m., it offers tapas-style dishes like gator tacos ($10), roasted honey Brussels sprouts ($7), and an assortment of rosemary-infused flatbreads ($8 to $10). 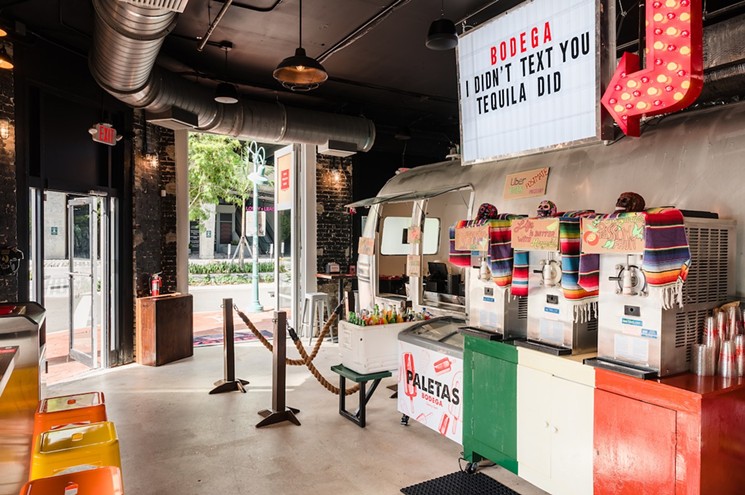 At noon or midnight, La Bodega serves up tacos and tequila.
Photo by Lalani Productions

21 W. Las Olas Blvd., Fort Lauderdale
954-945-5545
bodegataqueria.com
With locations in South Beach and the American Airlines Arena, it was about time for Bodega to head north. It officially arrived in Fort Lauderdale in November 2020. Downtown Fort Lauderdale is loaded with contemporary Mexican offerings, but Bodega tacos is a worthy rival. Varieties include camarón al coco ($4.75), steak chimichurri ($4.75), and a vegan "pollo" asado ($4.50). Situated across the street from the Wharf Fort Lauderdale, La Bodega stays open late on Fridays and Saturdays, providing for the perfect post-midnight fix. Before you leave, take a pic with whatever its changeable letter sign says inside, like the "I didn't text you, tequila did" one in the photo above. 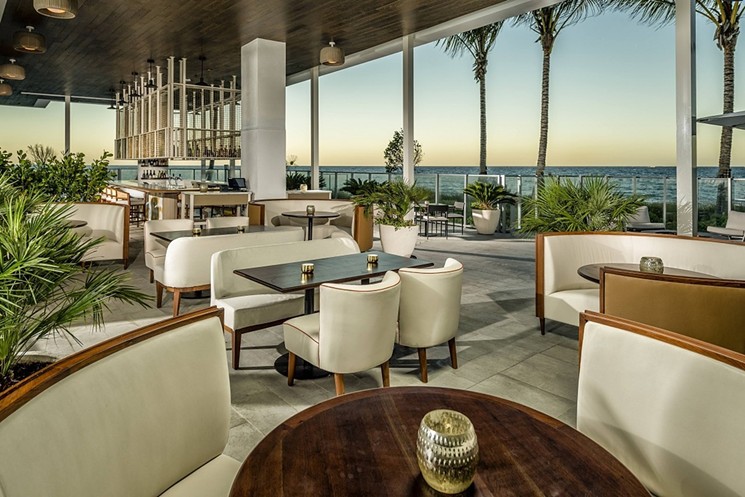 A view from the dining room at Dune.
Photo by Nick Garcia Photography

2200 N. Ocean Blvd., Fort Lauderdale
754-900-4059
dunefl.com
Elegance and coziness have found the right balance at Dune, situated inside the Auberge Beach Residences & Spa on Fort Lauderdale Beach. Before heading for dinner, grab a drink at the centrally located, white-clad bar, which serves up cocktails like the Pimm's-loaded Dune Breeze ($15). The expansive oceanfront terrace is primed with cozy fire pits and an unobstructed ocean view. Menu items include a farro risotto ($23), Kurobuta pork chop topped with spaetzle, and an assortment of butcher's-block chops ($28 to $65). 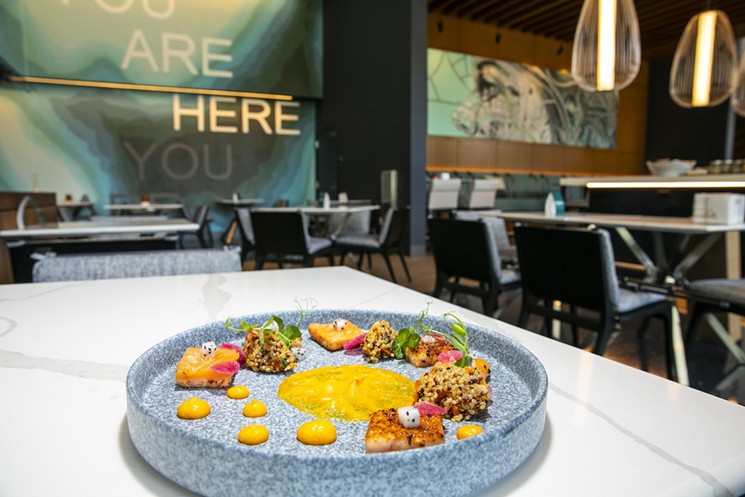 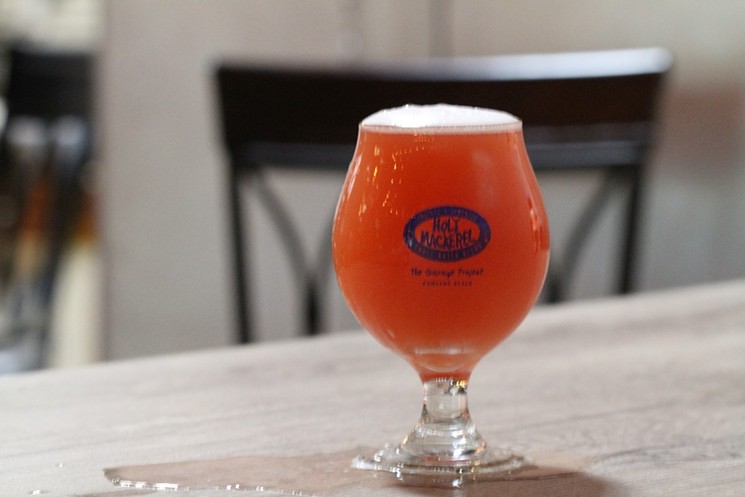 With an array of brews, barbecue, and community events, Holy Mackerel has quickly become a hot spot in Wilton Manors.
Photo by Nicole Danna

1414 NE 26th Street, Wilton Manors
954-306-3458
holymackerelbeers.com
Holy Mackerel’s Wilton Manors taproom opened in January 2020 and has quickly become a neighborhood favorite. In addition to a thirst for the extensive menu of small-batch beers, bring an appetite for barbecue offerings, including — on weekends — a cornbread and pulled pork skillet ($15), a massive serving of halo onion rings ($9), and  a warm soft pretzel that clocks in at a pound and a half ($16). You'll feel right at home, perched at a picnic table out front with a cold, fresh brew in your hand. 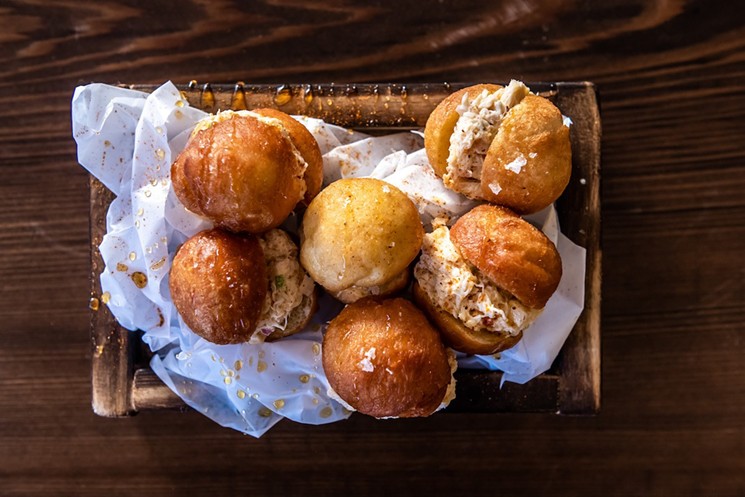 Rivertail's crab doughnuts are a specialty of the house.
Photo courtesy of Breakwater Hospitality Group

4 W. Las Olas Blvd. #120, Fort Lauderdale
954-306-2665
rivertailftl.com
Simply put, James Beard-nominated chef José Mendín has opened a gem of a restaurant in downtown Fort Lauderdale. There's not a bad spot in the house when you're dining on the covered patio alongside the New River. The servers are on point, the weekday happy hour is a winner (99-cent oysters!), and the portions are ample. Try crab doughnuts ($14) or the truffle mac 'n' cheese ($11), then get down to business with a lobster stuffed with blue crab and topped with yuzu hollandaise ($45). 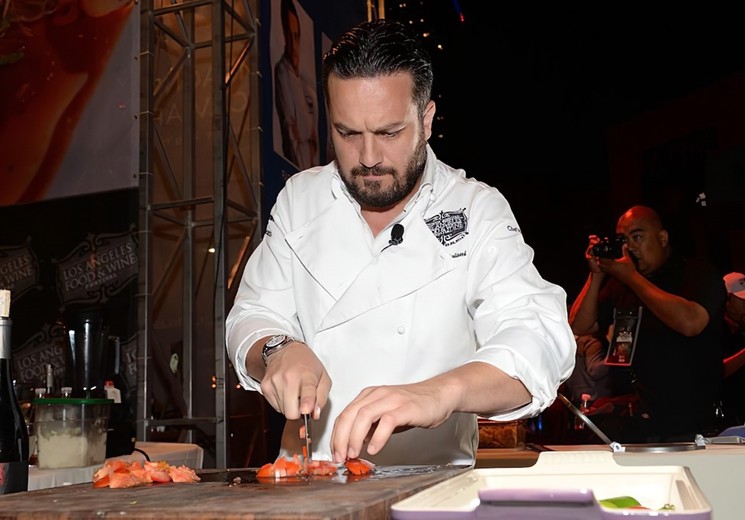 Riviera by Fabio Viviani at the Hotel Maren

525 S. Fort Lauderdale Beach Blvd., Fort Lauderdale
754-241-2020
rivierabyfabioviviani.com
The Hotel Maren has popped up along Fort Lauderdale beach and part of its noticeable elegance is its restaurant. The name Fabio Viviani may sound familiar – he was on the fifth season of Top Chef and was voted a fan favorite for his charisma and passion. The coastal Italian fare at his latest restaurant has quickly become a fan favorite too, with dishes including Florida stone crab claws (market price), Mishima Reserve Wagyu steaks (MP), a squid ink lumache (shell-shaped pasta with frutti d mare ($35), and, for the vegetarian crowd, a charred cauliflower steak ($23). The outdoor terrace is directly on A1A, so you can enjoy the fresh salt air while you dine. 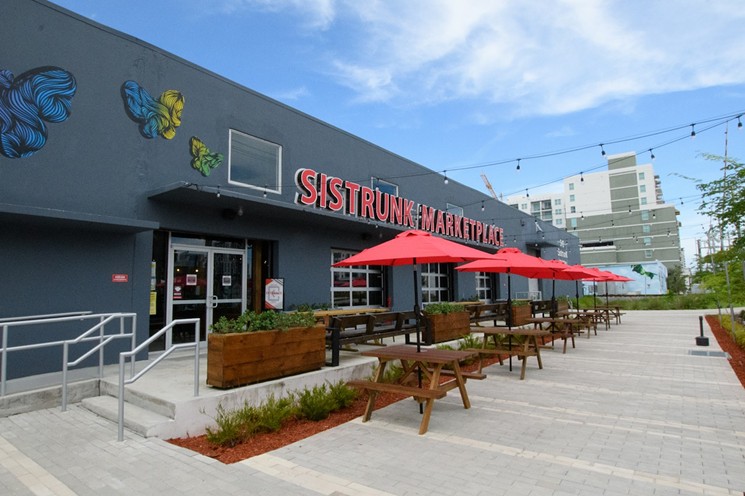 Head to Sistrunk Marketplace & Brewery to sample all manner of different cuisines under one roof.
Photo by Cailin Byrne

115 NW Sixth St., Fort Lauderdale
954-329-2551
sistrunkmarketplace.com
Fort Lauderdale’s Flagler Village is quickly becoming the next Wynwood. And within the graffiti-clad, ultra-hip neighborhood, Sistrunk Marketplace & Brewery is the place to be. Originally slated to open in 2019 but pushed back because of COVID restrictions, the 40,000-square-foot space made its debut in August 2020. As of March, more than ten tenants are serving up everything from empanadas to Asian fusion tapas to poke bowls, all in a market-like setting. With a large area filled with picnic tables out front, it's a great spot for an informal daytime or evening meal. Sistrunk is equipped with a super-intuitive mobile ordering system, allowing guests to try a little bit of everything from one spot. If you're on the fence about a visit to Sistrunk, consider the fact that it also houses a distillery. That ought to seal the deal. 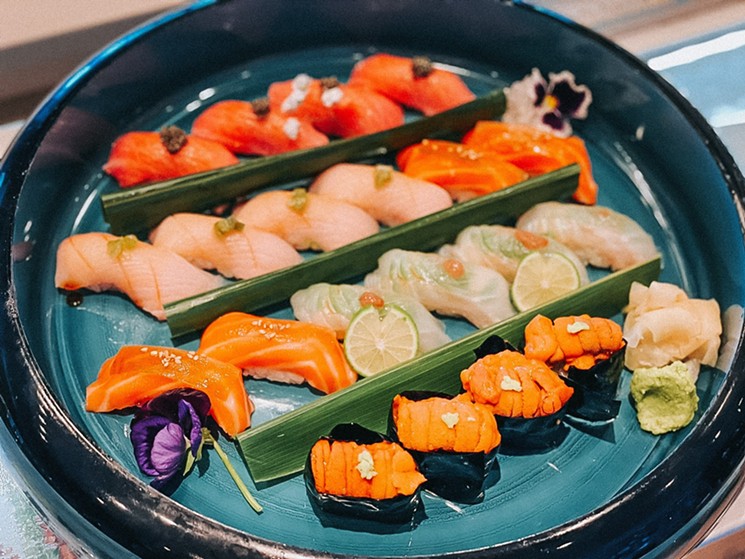 The chef's sashimi platter is one of many carefully crafted dishes that will delight at Takato.
Photo courtesy of Takato Restaurant 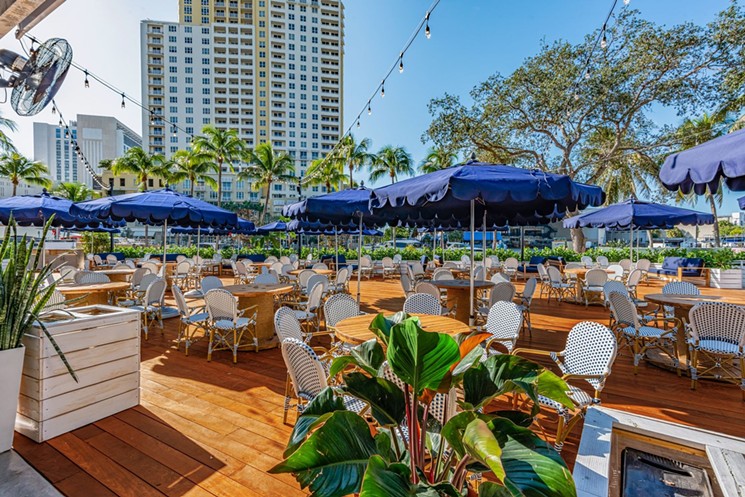 20 W. Las Olas Blvd., Fort Lauderdale
954-372-7606
wharfftl.com
This 54,000-square-foot open-air space offers food, cocktails, and music directly on the New River. Open Thursday to Sunday, the Wharf features multiple seating areas and bars, so you're sure to find a spot to sit and relax. Five different food concepts will sate any of your cravings: Even Keel offers fresh oysters on the half shell, fish dip, and other seafood items; chef Timon Balloo's Mrs. Balloo concept serves Pan-Asian favorites; the Lunchroom offers oversized sandwiches; and the Piefather by chef José Mendín bakes personal pizzas. Mojo Donuts satisfies your sweet tooth with a variety of outrageous doughnut flavors. Come by Uber, by car, or by boat — the Wharf provides 480 feet of dock space for guests.
KEEP NEW TIMES BROWARD-PALM BEACH FREE... Since we started New Times Broward-Palm Beach, it has been defined as the free, independent voice of South Florida, and we'd like to keep it that way. With local media under siege, it's more important than ever for us to rally support behind funding our local journalism. You can help by participating in our "I Support" program, allowing us to keep offering readers access to our incisive coverage of local news, food and culture with no paywalls.
Make a one-time donation today for as little as $1.