The Best Latin Restaurants in Broward and Palm Beach Counties 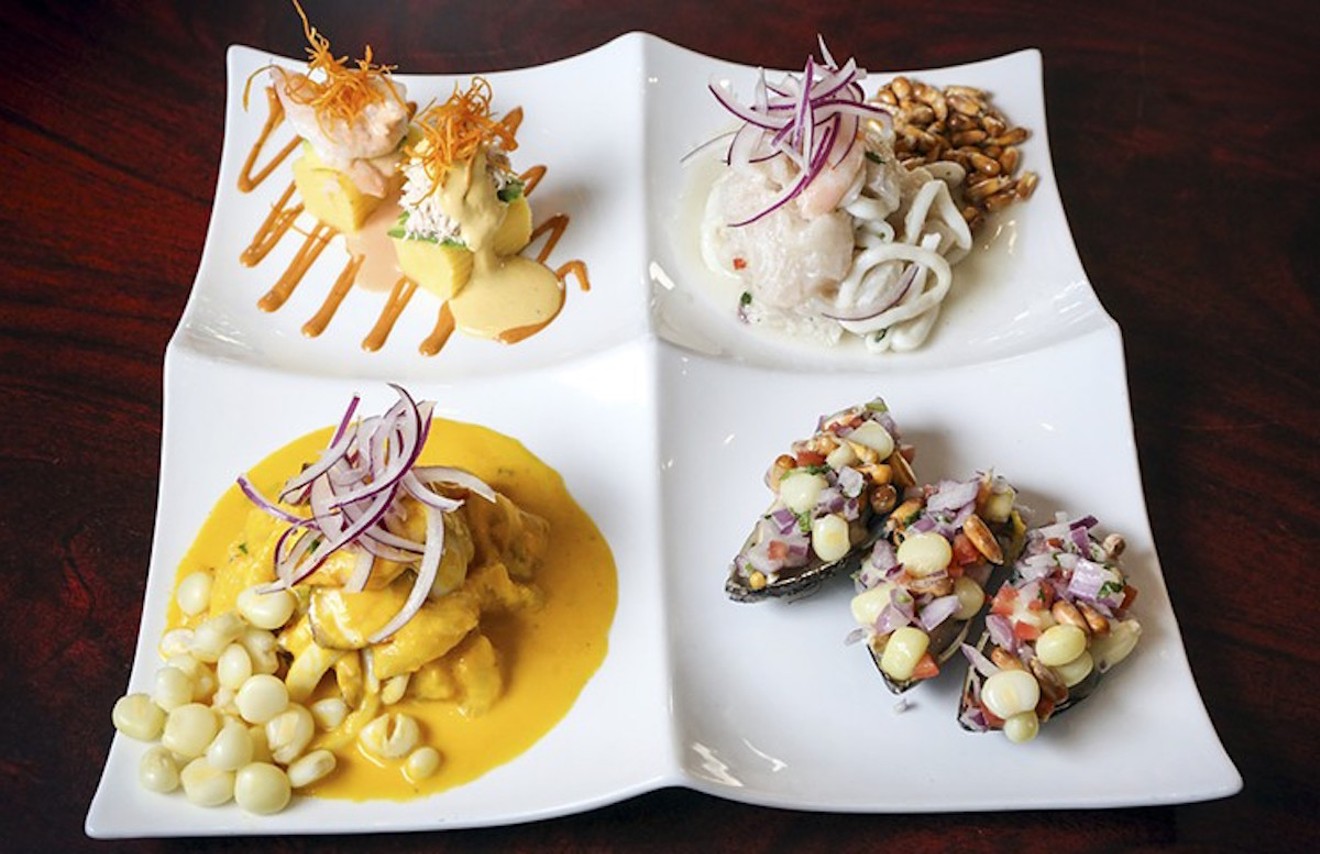 Runas Peruvian Cuisine in Hollywood. Photo by Candace West
There's no need to be fluent in Spanish to love all things Latino, especially the food, which offers something for every palate. The flavors of Latin America, a region which includes South and Central America, Mexico and the Caribbean, are as expansive and diverse as its people, with each country pulling from a unique cultural history and local ingredients.

Thankfully, we South Floridians are blessed with plenty of eateries serving up these diverse delicacies. From Mexican taquerias to fine Chilean dining to backyard Brazilian feasts, here’s where you can find Broward and Palm Beach's best Latin food. We promise you will be saying again and again. 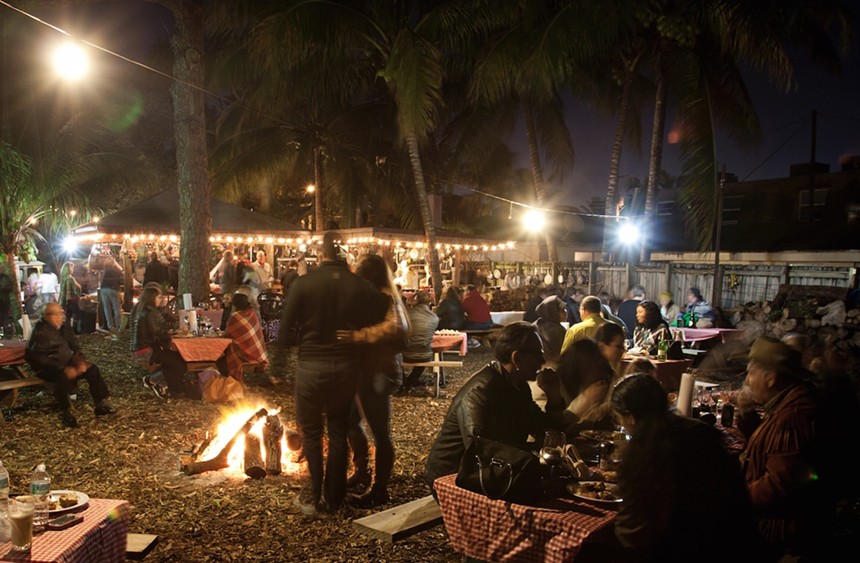 Regina's Farm.
Photo by Eduardo Schneider
1. Regina's Farm. Food is strongly tied to memory. Since 2006, Regina and Eliseu Rodrigues have been cooking Brazilian comfort food in their little farm's backyard in Fort Lauderdale, invoking the nostalgia they feel for their native cuisine. Three Saturdays a month, they prepare meals at their outdoor kitchen, which includes a hand-built cement oven fueled by burning wood. Guests are greeted by the couple and then gather at picnic tables; the welcoming atmosphere a prelude to a family-style, full-flavored feast. For a $45 donation, which benefits the Las Olas Worship Center where Eliseu is a pastor, you can eat as much food as you like. Recent dishes include fresh pão de queijo, a variety of soups, chicken with okra, red and black beans, vegetables, polenta, and moqueca de peixe, a Brazilian fish stew. For dessert, there are flans, cakes, pastries, pies, and other sweet treats, served with fresh-brewed coffee. Reservations are booked months in advance, so make sure you get on the list now. 101 Middle St., Fort Lauderdale; 954-465-1900; reginasfarm.com. 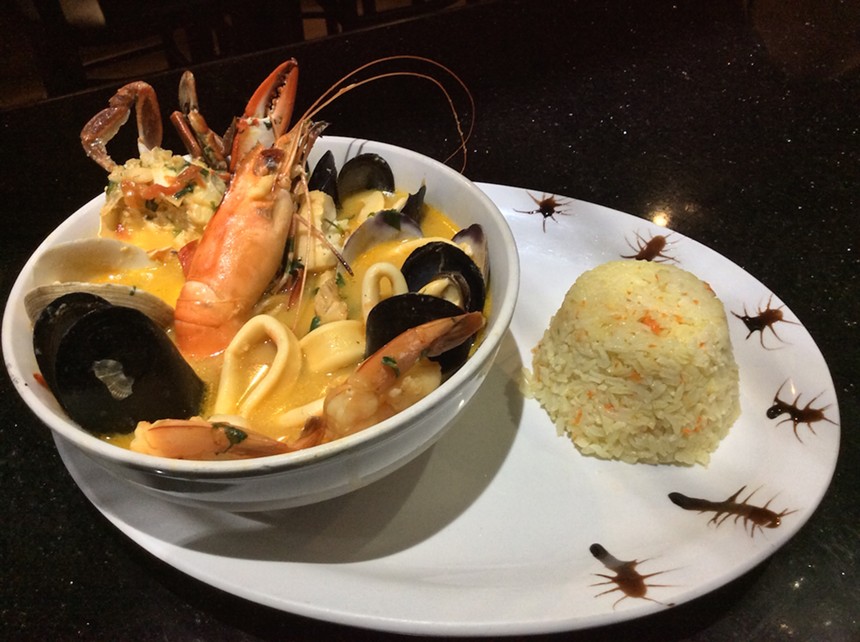 Mariscada soup at El Tamarindo.
Courtesy of El Tamarindo
2. El Tamarindo. This unpretentious, neighborhood-favorite eatery is where the Amaya family showcases their own brand of no-frills Latin fusion. The five siblings hail from El Salvador, but their food also draws on influences from Mexico, Cuba, and Argentina. Among the eclectic list is a selection of sandwiches, tamales, tacos and fajitas, entrees like churrasco, carne asada, a pork roast, and the hearty mariscada soup with clams, mussels, calamari, langostino, shrimp, scallops, crab, and tilapia. Another highlight is the coal-fired pizza, a thin crust delight of homemade sauce and fresh ingredients. Whatever you order, ask for their delicious chimichurri on the side and you will get it with plenty of parsley, olive oil, red pepper, garlic, and vinegar. The sweet coconut flan is the perfect finish to your meal. 712 Atlantic Shores Blvd., Hallandale Beach; 954-456-4447; eltamarindocafe.com. 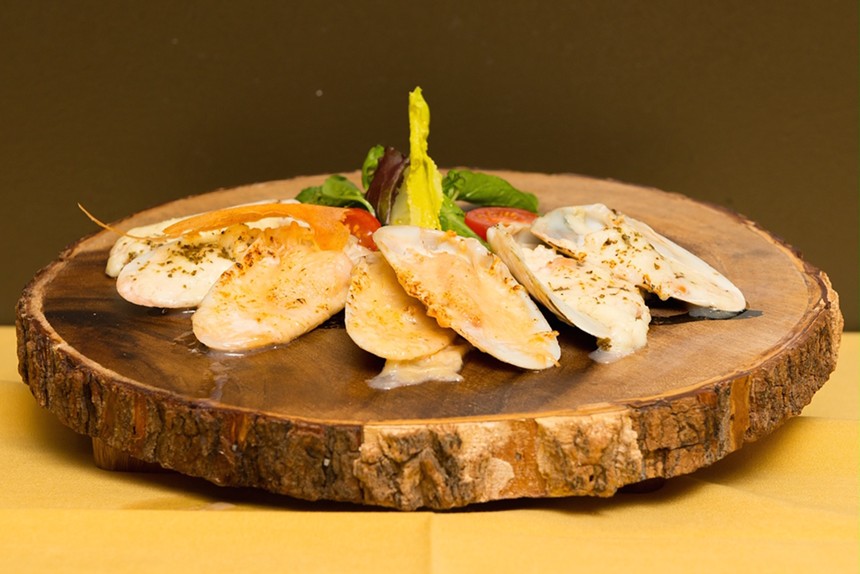 Pink clams in parmesan sauce at Legado.
Courtesy of Legado Restaurant
3. Legado. Chilean food lovers who have been longing for one of the most diverse cuisines of Latin America will find the cure for their woes at this snug Hollywood spot. The northern Chilean Montenegro-Guggiana family is behind the magic here, serving up delicacies like the rabbit in white wine, sea urchins with green sauce, crab au gratin, and the legado lamb marinated in honey, black beer, and rosemary. There's also a quinoa and olive tapenade salad, with goat cheese and sides of olive mashed potatoes and roasted tomatoes. It's worth leaving some room for a savory dessert of papayas with nectar juice, almond or the poppy seed mousse with figs. 1824 Harrison St. 33020 Hollywood; 954-248-6915; legadorestaurant.com. Courtesy of Tacos al Carbón
4. Tacos al Carbon. Tacos al Carbon has been wowing South Florida foodies since when it started operations out of a food truck. A statue of Mexican revolutionary Pancho Villa greets you at their full-service restaurant, which draws in daily crowds in search of authentic Mexican food. The eatery showcases fresh, handmade gluten-free flour corn tortillas, fajitas, tacos, and a unique seasoning because "sauces are the magic on Mexican food," says owner Eloisa Delgado. The social atmosphere is complete with Mexican music and actual mariachis that perform during special events. On Fridays, Saturdays, and Sundays, the restaurant is open around the clock. Congress Point Plaza, 4469 Congress Avenue, Palm Springs, 561-328-6753; allmenus.com. 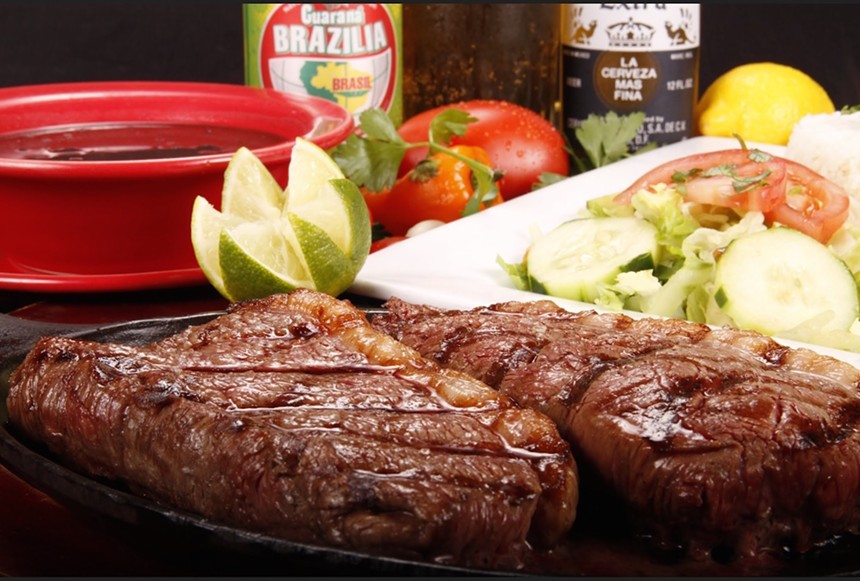 Courtesy of Latinos
5. Latinos Restaurant. Expect a full scope of Latin American dishes at this restaurant, which has been offering something for every Latin food aficionado in Deerfield Beach for the past 17 years. The mix of experiences includes soup options like the shrimp-based chupe de and the ajiaco santafereño, made with three different types of potatoes, shredded chicken and corn. Standout starters are the a , a mix of fried chicken legs and wings, the linguiça , which is smoked Brazilian sausage, and many taquitos, arepas, and tostones. Entrees include ceviche, cazuelas, the encebollado, a dish of with caramelized onions, the Peruvian , and the cachapas, Venezuelan sweet corn pancakes. There's also a sushi section on the menu, with Latin-inspired rolls like the carioca with shrimp tempura, avocado tuna tartare on top. Latinos offers daily breakfast and live music every weekend. There's also an attached market selling quality meats. 1754 W Hillsboro Blvd., Deerfield Beach; 954-428-7411, latinosrestaurante.com. 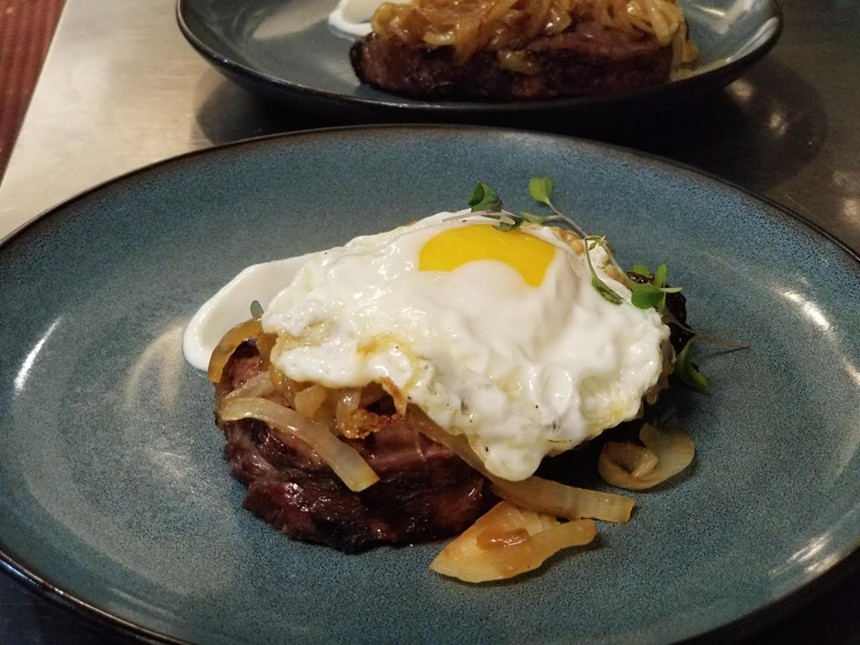 Solomo a caballo.
Courtesy of La Casserola
6. La . If you think Venezuelan cuisine is all about arepas, a trip to La  will make you want to learn more about this country's diverse dishes, marked by , African and European influences. Sisters Cristina and Margarita Vernet grew up playing with the food their grandmother made in her home kitchen and their eatery follows the family tradition of hearty meals served in a warm, friendly space. Their list of beverages  a drink of raw crushed cane sugar with lemon, and the chicha, made of rice, condensed milk, and sugar. There are cachapas with pulled pork and shredded beef and main courses of asado negro and the  de , a chicken pot pie served with arugula salad and plantains. The Venezuelan cornflour pockets here are served with savory fillings like rump roast, plantains shredded chicken. You'll find live music and performances on Fridays, along with a special menu. 6941 SW 196th Ave, Pembroke Pines; 954-470-5021; lacasserola.com. 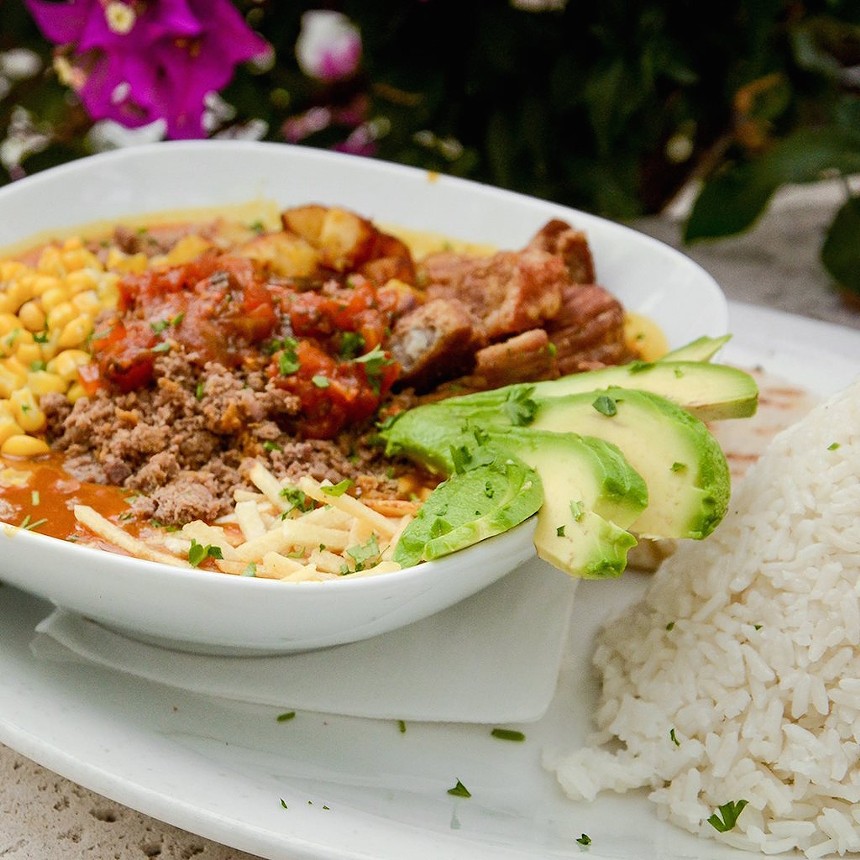 Cazuela palsa.
Courtesy of Balcon de Las Americas
7. El Balcón de Las Americas. Colombia native Alvaro Tobar came to Florida with a bag full of dreams and culinary recipes. His ambitions blossomed and twenty years later, the Tobar family runs six restaurants across South Florida, with menus that are a combination of their many chefs' talents and an atlas of Latin flavors. At any of their locations, start your meal with refreshing fruit juice such as the blackberry, guanabana, or the de coco, freshly squeezed lemonade with coconut. Starters include the mondongo, a traditional soup made with tripe, pork, and potatoes, a variety of quesadillas, and the patacón con , a dish of fried green plantains served with a special Colombian sauce. Continue with the main course of en salsa, beef tongue topped with tomato and onion sauce, or the caleña, thinly pounded pork tenderloin lightly breaded and fried. For dessert, you can't go wrong with the caramel flan. Several locations; elbalcondelasamericas.com. 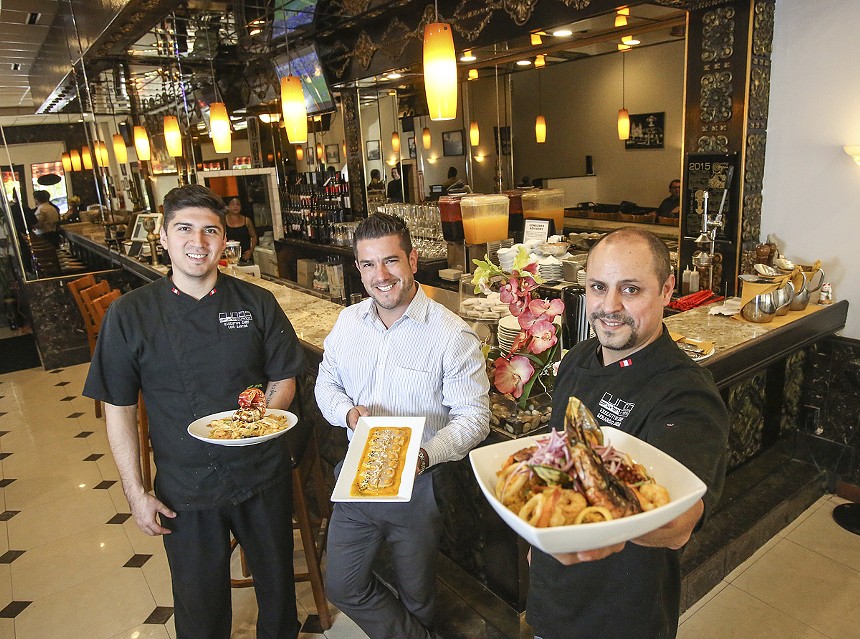 From left: Runas Peruvian Cuisine's executive chef and owner Luis Santos, general manager and owner Tony Dominguez, and executive chef and owner Gerardo Landa.
CandaceWest.com
8. Runas Peruvian Cuisine. This Hollywood restaurant takes it back to the important basics of Peruvian cuisine, with a traditional variety of ceviche, cooked in lemon juice and served swimming in ' milk. Chef-owners Santos, Gerardo Landa, and Tony Dominguez also offer other bold flavors in dishes like the de , a mix of seafood served in an ají and mint sauce, veal heart skewers known as the de corazón, and plenty of tiraditos, , and . You will also find signature sushi rolls to drizzle with , chipotle and other sauces. For dessert, try one of their pisco sours. 219 N. 21st Ave, Hollywood; 954-534-9146; runasperuviancuisine.com.

Courtesy of 925 Nuevo's Cubano's
9. 925 Nuevo's Cubano's. This charming Fort Lauderdale eatery was built in 1976 by Luis Valdes Sr., in the front portion of the family home where he raised his children. Four decades later, he's still offering the neighborhood a great taste of homestyle Cuban food, now cranked out of a tiny open kitchen surrounded by a bar. Fourteen legs of pork are roasted daily here in low heat for sixteen hours - and then pulled by hand to keep its juices. The menu is made up of a roster of sandwiches including steak, pork, ham and cheese, a Cuban burger, and platters like the pork chunks, tilapia, and carne asada, which come with black beans, rice, and a choice of sweet plantains, tostones, fries or salad on the side. 925 N. Andrews Ave., Fort Lauderdale; 954-806-8375; nuevoscubanos.net.
10. Agave Taco Bar. This Mexican taqueria was born from a tiny taco shop with a healthy mix of modern and traditional dishes from chef-owner Ivan Alarcon's hometown of Monterrey. Start with the guacamole or the queso , to which you can add mushrooms, chorizo or rajas. Follow with the tacos de with beef and pork or the de res, a medium seared 8-ounce rib-eye steak in a chile-lime sauce topped with avocado slices. Also consider the de res, beef soup with vegetables, the , a tripe soup served with cilantro and onion, and the del , corn cakes with chicharron, salsa verde refried beans. For dessert, the lime-tequila flavored cheesecake will leave a sweet smile on your face. 13040 W State Rd 84; Davie; 954-530-4321; agave-tacobar.com.
KEEP NEW TIMES BROWARD-PALM BEACH FREE... Since we started New Times Broward-Palm Beach, it has been defined as the free, independent voice of South Florida, and we'd like to keep it that way. With local media under siege, it's more important than ever for us to rally support behind funding our local journalism. You can help by participating in our "I Support" program, allowing us to keep offering readers access to our incisive coverage of local news, food and culture with no paywalls.
Make a one-time donation today for as little as $1.
Juliana Accioly
Contact: Juliana Accioly