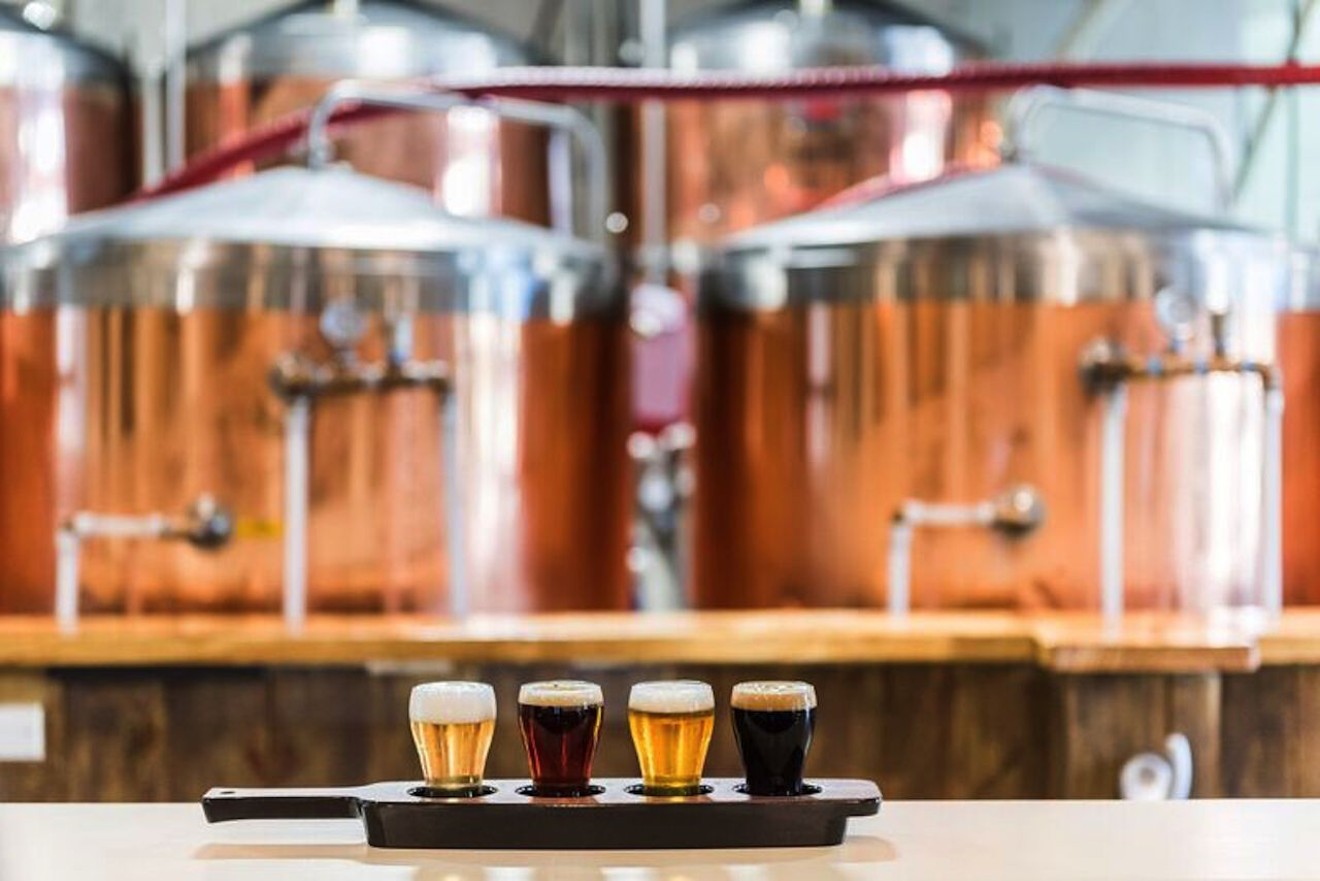 Tarpon River Brewing Courtesy of Tarpon River Brewing
Everything tastes better with beer. And you'll find unlimited flavor options on Fort Lauderdale's Ale Trail, created by the Greater Fort Lauderdale Convention & Visitors Bureau. Their map is dotted with 32 craft brew pubs and 15 nano- and microbreweries, a remarkable showcase of local brewers which are continuously hopping-up their game to offer the most innovative and intriguing creations.

The hunt for that perfect craft beer is a big part of the trail's appeal, but with 500 options to choose from, we're making your chase a little easier with a roundup of some of the best spots to hail the ale. Explore everything from barrel-aged ales to crisp, clean lagers, and mixed-fermentation sour beers. Break out of your comfort zone and you might just find a new favorite! 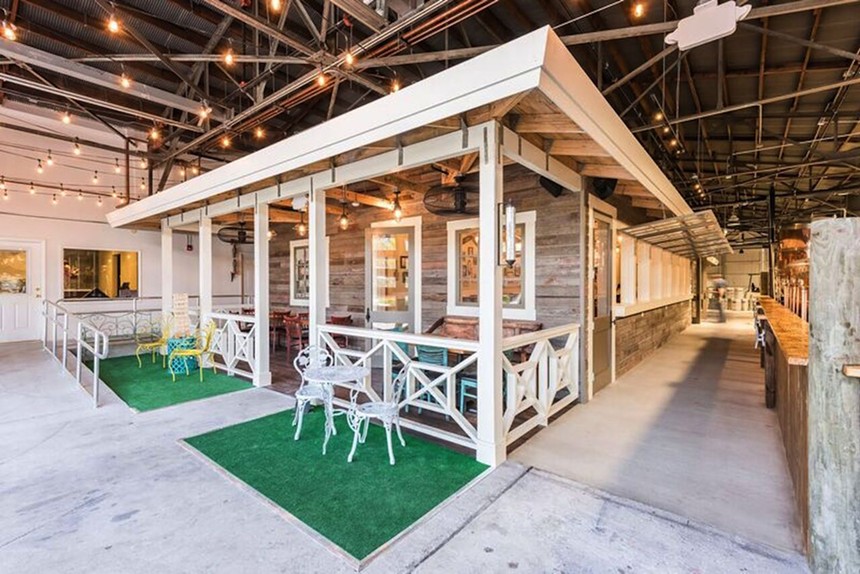 Courtesy of Tarpon River Brewing
1. Tarpon River Brewing. There's plenty of room for brewing and drinking at this 11,000-square-foot warehouse in Downtown Fort Lauderdale, where Julian and Lisa Seigel from the Riverside Market and head brewer Adam Fine have kept 16 taps flowing for the last eight months. Some gems to keep an eye out for are the Honey Love, an imperial cream ale with a light sweet finish and aromas of orange blossom honey; and the Prickly Pear Margarita Sour, a balance of sweet and juicy Prickly Pear, agave syrup and the classic Berliner Weisse-Zinger, which has a nice lemony and tart bite. The Morning Express Coffee is a , sweet oatmeal stout blended with two different types of coffee for a mouthful of dark and rich flavors with a kick. Tarpon river also cranks out a new beer every Treatment Tuesday, with fruits, spices, and new interesting ingredients added weekly. 280 SW Sixth St., Fort Lauderdale, 954-353-3193, tarponriverbrewing.com. Courtesy of Gulf Stream Brewing
2. Gulf Stream Beer. Ales and Lagers are the focus at this brewhouse, which features an open-air taproom where patrons can drink directly next to the brewing action. Pacific Northwest transplants McKay Ferrell and Ty showcase 30 years of industry experience and a sustainable mindset: Gulf Stream uses a system that reclaims wastewater from the brewing process and donates spent grain to local farmers for feed. There are eight beers on tap, including the Departed, a complex India Red Ale with a rounded malt base, notes of caramel, biscuit, and gratuitous hop additions for spiciness and citrus zest aromas. Hop heads will delight in the Prism Break, a clean India Pale Lager with the flavors and aroma of pine, spice, and grapefruit. There's also the Hefe That, a true Bavarian-style Hefeweizen with slight notes of banana and citrus. The brewery adds at least one new beer to its roster per week and hosts rotating food trucks Wednesday through Sunday.1105 NE 13th St., Fort Lauderdale, 954-766-4842; gulfstreambeer.com. Courtesy of Khoffner Brewery
3. Invasive Species Brewing. Thinking outside the box is the motto at this popular, laid-back Flagler Village brewery, which features 20 rotating drafts, great music, beer to go, and food trucks on weekends. Its fun, dog-friendly interior with hunting lodge decor is a great place to hang with friends, or you can choose to wander out to the spacious outside beer garden to savor flights of their great selections of sours like the Patsy Cline, with fresh Florida peaches and blueberries; or the Sour Pants, made with guava and passion fruit. Upcoming Fall offerings include a native sour with Florida Muscadine grapes and another with Saison aged on oak and rosemary. 726 NE Second Ave., Fort Lauderdale; invasivespeciesbrewing.com. Courtesy of Holy Mackerel Beers
4. Brewery. At his namesake Fort Lauderdale microbrewery, Rauf Vagifoglu- offers a flagship lineup that stays true to his German tradition of producing balanced, smooth beer. You can sit at the long bar and order a complete flight from the 14-beer list for a very reasonable price or opt for selections like the Riot Blood, a medium-bodied, reddish-hued Irish red ale with a dash of roasted barley and notes of malty-sweet caramel and toffee. The full-bodied French Biscuit is a seasonal beer brewed with fresh pumpkin and spices such as cinnamon and clove. Other favorites are the Kombucha, a Reserve Raspberry chocolate stout and the Kremlin Wolf, a smooth Russian imperial stout that is dark and deep brown in color. On Sundays, the brewery hosts a Grill Chill, a potluck lunch to which all are welcome. 1110 NE Eighth Ave., Fort Lauderdale; 754-701-8860; khoffner.us.

next
KEEP NEW TIMES BROWARD-PALM BEACH FREE... Since we started New Times Broward-Palm Beach, it has been defined as the free, independent voice of South Florida, and we'd like to keep it that way. With local media under siege, it's more important than ever for us to rally support behind funding our local journalism. You can help by participating in our "I Support" program, allowing us to keep offering readers access to our incisive coverage of local news, food and culture with no paywalls.
Make a one-time donation today for as little as $1.
Juliana Accioly
Contact: Juliana Accioly