It recently inked a two-year deal with Ocean Front Records — a former subsidiary of influential soul label Motown Records — and now, the all-girl group the New stands to be one of South Florida's breakout stars. This half Broward/half Miami-Dade band's potential success owes a lot to lead vocalist and guitarist Lori Garrote. Many would say she is the principal reason the New might just be the newest thing on everybody's lips in 2011. Garrote has a delivery that is deliciously inviting, a subtle snarl that verifies, "Yeah, I'm punk rock gal" while somehow still conveying a confectionery-schoolgirl bubblegum-pop sensibility. Garrote is the perfect union of Bikini Kill and Michelle Branch — if ever such an inexplicable union of disparate worlds could exist. Over the group's chunky Breeders-esque riffs, Garrote's voice is an irresistible force. To add fuel to the fire, Garrote possesses an alluring pout that harks back to the Bangles' sexpot, Susanna Hoffs, and the composure of someone twice her age. She is, in essence, an A&R rep's dream.

Julian Cires, lead singer for cacophonous Northern Palm Beach three-piece Lavola, possesses the kind of vocals that command attention. He has dexterity in range, for one, taking his voice on adventurous turns that vacillate from ear-piercing howls one minute to soothing, velvety coos the next. Cires, a rather handsome Latin man, can also take his delivery in intriguing androgynous directions. He has Aimee Mann and Björk listed as influences on his band's profile page, and his more effeminate vocal skills are evident on the more tender dips in his trio's sonic roller coaster. Thom Yorke and his haunting and bewitching voice, however, is Cires' number-one inspiration.

After a few years of relative quiet from the Lake Worth singer/songwriter, it's a relief to hear that John Ralston can still fill a single tenor note with vulnerability and hope, glee and introspection, or wisdom and bitterness. His latest album, Shadows of the Summertime, proves to be one of the finest alt-country/roots collections the area has ever heard, and above all, it's his relaxed vocal style — a tad like Tom Petty, a smidge of Jeff Tweedy, but mostly just uniquely Ralston — that makes it definitive. His recent recordings with Invisible Music show an equal amount of polish, so he might not only be the best vocalist but the hardest-working one as well.

Is it possible to make music that sounds like the craziest party a coral reef has ever seen? Sumsun sure thinks so. With keyboards, samples, and a dash of guitar, Judson Rogers builds vivid soundscapes that are perfect for daydreaming, slow-dancing, and providing the background for creative endeavors. Samo Milagro is the official document of Rogers' musical endeavors, but a steady stream of remixes of other artists' songs — ANR, Sleigh Bells, and Guy Harvey among them — shows he's listening to as much music as he's creating.

With a pack of backup musicians or just as a pair, Wellington's Anthony and Zachary Dewar have never fallen into old habits as a live folk-rock act. Can a pair of twins barely into their 20s really have old habits yet? The charismatic brothers tear through originals like "The Noise Boys" and "Sunshine" with considerable aplomb and even throw in an occasional Leonard Cohen cover. Sardonic banter, outlandish thrift-store fashion, and sweet harmonies dot every appearance — no two are alike. They're entertaining enough that Surfer Blood even brought them out on the road.

Quirky West Palm Beach indie group the Clementines embodied everything we loved about postpunk rock. Tracks like the bubbly "Chandelier" and the shimmering "Everything Will Be Okay" had us salivating, yearning for the atmospheric glory of '80s British dream-pop bands like the Chameleons and Echo and the Bunnymen. These songs captured a melancholic and nostalgic feel that was far removed for the band's sunny, palm-tree-laden home of West Palm Beach. The quartet's bouncy, organ-led tracks exhibited a lot of dazzling indie-rock promise, we thought; we gave them many a kudo on our blog pages. Alas, we were saddened to hear the news that the four members decided to go their separate ways at the start of the year. There is a flicker of hope at the end of this tunnel, however; the group's lead vocalist, guitarist, and keyboardist, Andrew Marr, is keeping the bittersweet-pop torch alive with another project he is calling Ski Lodge. He's traipsing similar terrain as his defunct four-piece and will be unveiling many unreleased Clementines songs with this new unit.

Boy, did the Broward County Commission need a bona fide Republican on the dais to offset the controlling — and incredibly corrupt — local Democratic Party. LaMarca, after defeating sitting Broward Mayor Ken Keechl, has played that role, questioning spending and pet projects. His defining moment came after Commissioner Ilene Lieberman missed numerous meetings (after apparently suffering a nervous breakdown while cooperating in a state corruption investigation against some of her former friends). While the public clamored for answers, the commission was silent — except for LaMarca. During one meeting, he had the guts to question what should be done about the AWOL commish. When he did so, Democrat Stacy Ritter, who for good reason is a target of the corruption investigation, gave LaMarca a stare as icy as a Chicago blizzard, and the other commissioners began tripping over themselves trying to defend Lieberman's inexcusable absences. Guess what happened the following week? Lieberman finally showed up at a meeting — and many credited LaMarca with giving her the push she needed to get back to work.

Enter any discussion about Hallandale Beach's city government and you'll find yourself surrounded by bickering. Taxes are going up and parks are going to ruin while the city manager makes a cool half-million a year. Mayor Joy Cooper is a polarizing figure, to put it nicely (she's one of the loudest boosters for red-light cameras), and Commissioner Keith London seems bent on making her life hell. Into all this enters Mike Butler, a soft-spoken, well-tanned resident who looks like he wandered off a yacht and into City Hall, where he relentlessly questions the city's business deals and posts damning information on his blog. "Mike Butler doesn't shoot from the hip; he shoots the facts," quips London, who often circulates Butler's posts at City Commission meetings. He doesn't look like your typical gadfly, and he doesn't shout like your typical Hallandalian. Which is, all in all, for the best.

What are activists if not simply the kinds of public citizens demanded of any good democracy? In a perfect world, all of us would be watching our local governments — and discovering their outrageous shenanigans. But it's amazing the kind of impact one good activist can have on a place. Look at Cal Deal in Fort Lauderdale. The graphics editor and former newspaperman keeps an eagle eye not only on local politicians but on every aspect of his city. When a road construction project unfairly hurt a neighborhood florist, it was Deal who stepped up to get the lackadaisical city officials to help her out. When a prescription pill mill was opened in his Fort Lauderdale neighborhood by a former heroin trafficker, it was Deal who got out his trusty camera and documented the comings and goings. And it was Deal who pointed out that the taxpayer-financed North Broward Hospital District actually gave the pill mill some extra parking spaces to use. In the end, the hospital district finally rescinded the spaces due to Deal's diligence. But it's not just the ugliness of Broward County that attracts Deal but its beauty as well. When the so-called "super moon" rose over the ocean, it was Deal sharing stunning photos of the event with media members and the public. And that's the key to understanding Cal Deal — he's just a guy who cares enough about the place he lives to do something about it. 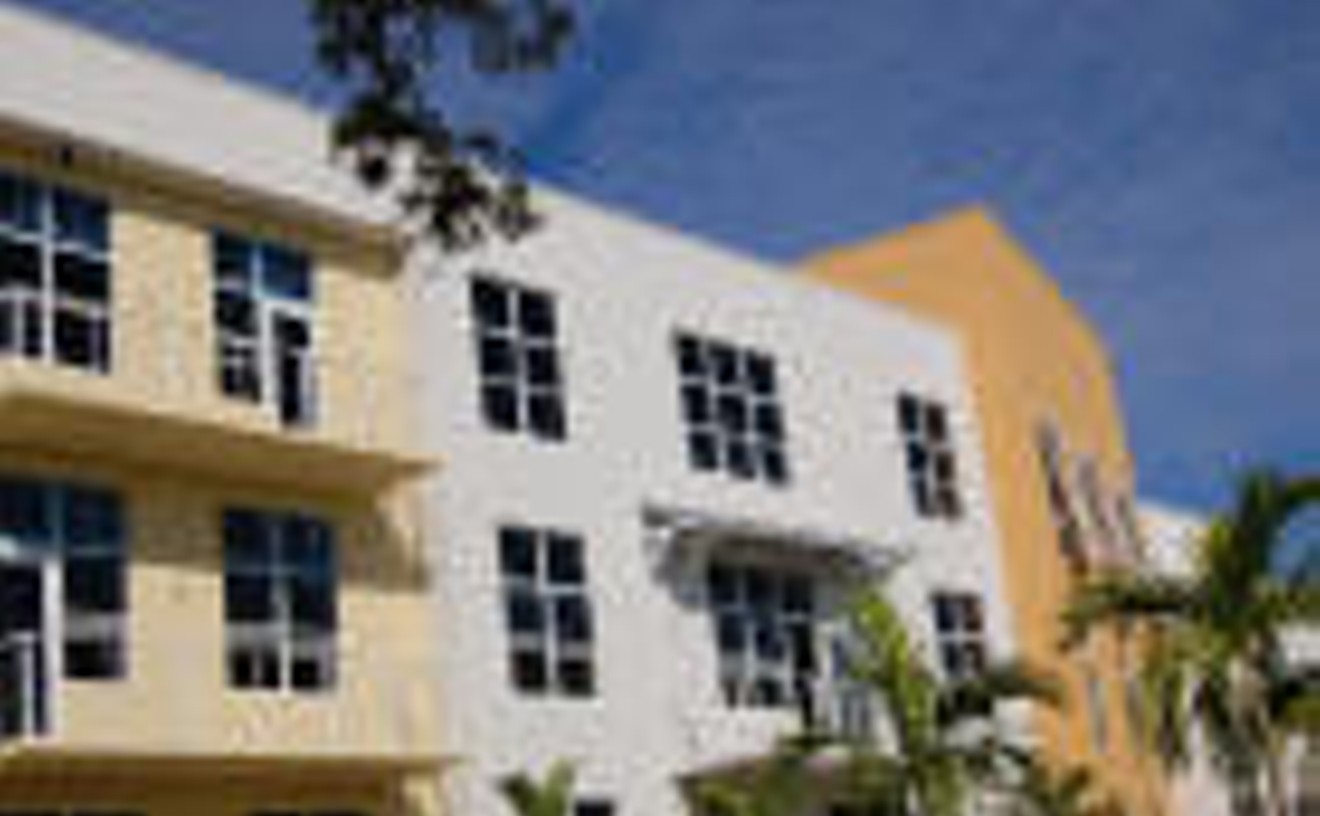 Opening a new art gallery in South Florida might be likened to throwing yourself into a shark-filled tank — the odds are against you. Which makes what Jeremiah Jenner has done even more remarkable. First the photographer survived a lengthy waiting list to snag his own space at Fort Lauderdale's Sailboat Bend Artist Lofts. But instead of using that space as both studio and residence, the way his neighbors do, Jenner did something more daring, as in opening his own little gallery. And with just a handful of shows under his belt, he has established himself as a force to be reckoned with locally. Topnotch artists contribute to his exhibitions, which he hangs with as much attention to detail as any of his competition. And perhaps best of all, Jenner has resisted what must be an enormous temptation to make the gallery a showcase for his own work, instead focusing on attracting and nurturing as many artists as he can.