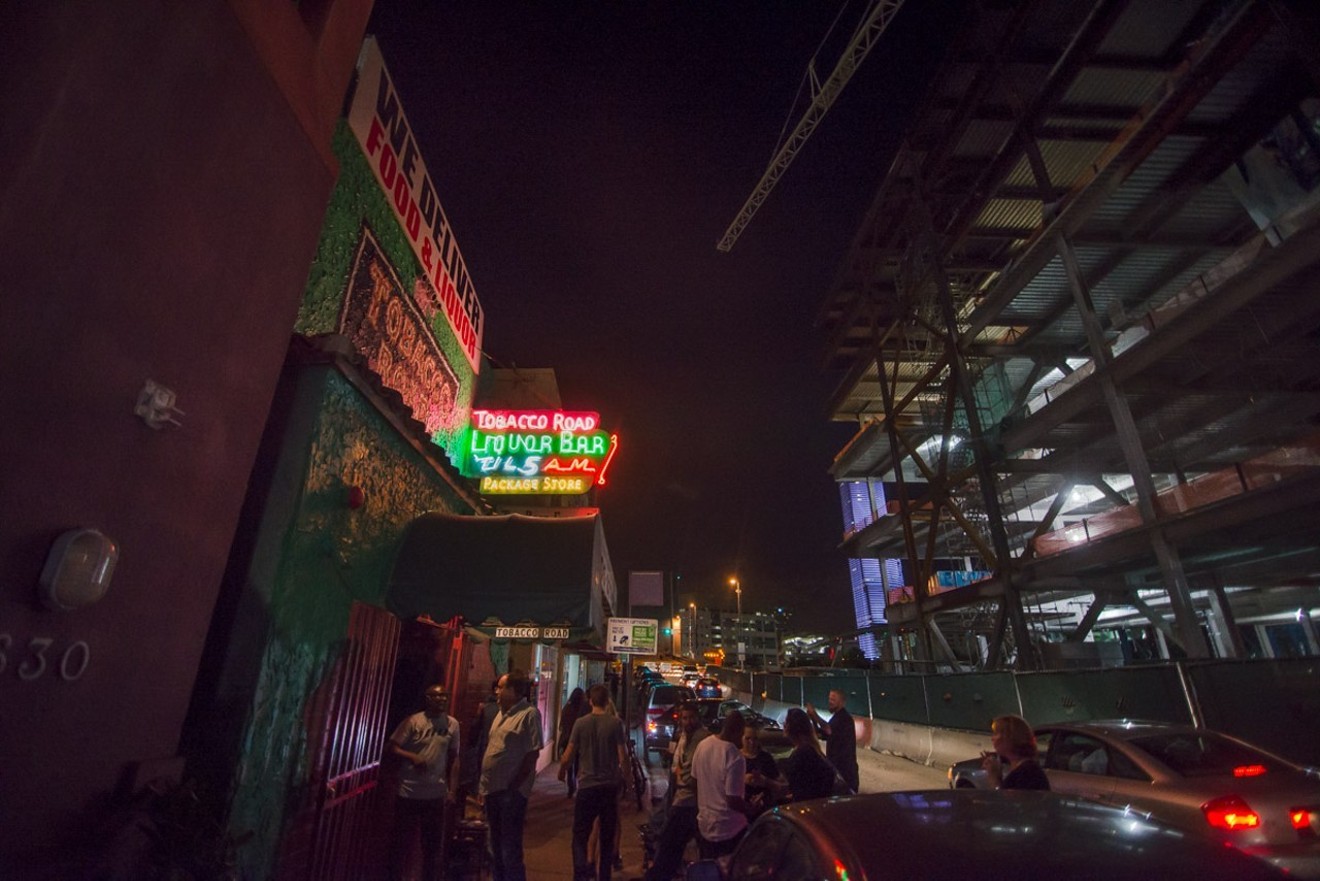 Tobacco Road by Kush is one of many independently owned restaurants that might not benefit from the new to-go law. Photo by Alex Markow
During the height of the pandemic, when restaurants were struggling to stay afloat, Gov. Ron DeSantis issued an emergency order that allowed restaurants and bars to sell wine, beer, hard cider, and cocktails in sealed containers. The move allowed restaurants that didn't have so-called package licenses to offer alcoholic beverages to customers as long as the customers ordered food.

During the bill signing at a Houligan’s Sports Grille in Ormond Beach, a Republican member of the Florida Legislature representing parts of Osceola and Polk counties said, “Some of the hardest-hit businesses throughout the pandemic have been our local restaurants.... This pro-consumer, business-friendly bill will help support our restaurant industry and its tens of thousands of employees.”

Sounds like a win for Miami restaurateurs — until you read the fine print, which is filled with restrictions that make it nearly impossible for mom-and-pop restaurants to benefit.

The bill states that in order for a restaurant to sell drinks to-go, it must be "a food service establishment that has 2,500 square feet of service area, is equipped to serve meals to 150 persons at one time, and derives at least 51 percent of its gross food and beverage revenue from the sale of food and nonalcoholic beverages."

In reality, however, it's more complicated than that. For an establishment to be able to sell to-go cocktails under the new law, it must possess what's known as a "special restaurant license." That license, often referred to as an SRX license, was designed to separate restaurants from other establishments, which must obtain so-called quota licenses, so named because state law determines the total number of licenses that can be issued in a county based on its population.

Samantha Padgett, general counsel for the Florida Restaurant and Lodging Association (FRLA), explains that before COVID, a restaurant that lacked a full-liquor quota license (or package liquor license) could not sell alcohol to-go.

"Typically, to serve alcohol, you need a quota license, and they're expensive," Padgett says. "In certain counties, they could cost half a million dollars. The SRX license allows restaurants that derive most of their revenue from food to sell alcohol. This new law now allows them to sell alcohol to-go."

Several of Matt Kuscher's Kush Hospitality restaurants sell cocktails (including Stephen's by Kush, Cafe Kush, the Tobacco Road by Kush, and Kush Coconut Grove), but not all of them are big enough to sell them to-go, according to the new to-go law. Kuscher says his team was in the process of creating a menu of to-go cocktails. Now, he says, he's not sure whether he can legally sell them.

Kuscher points out the obvious: The new law seems tailor-made for chain restaurants.

"Local Miami places, in general, aren't that big," he says. "So really, it's going to be all about chains selling drinks made with sugary margarita mix. That defeats the purpose of allowing restaurants to sell to-go cocktails."

The FRLA's Samantha Padgett says that passing new laws regarding alcohol consumption and distribution is typically a thorny process. Her agency, along with Uber and Anheuser-Busch, joined forces to lobby for the bill.

"If it weren't for COVID," she says, "this never would have passed. We presented this as an issue of survival for restaurants, and we found a tremendous amount of cooperation."

Padgett says the FRLA met with pushback when it sought to reduce restaurant size restrictions.

Aniece Meinhold, co-owner of Phuc Yea in Miami's MiMo District, says her restaurant is too small to fit the new law's capacity requirement. Even if it did, she adds, she wouldn't think of selling cocktails to-go.

"It doesn't make sense to us. Our cocktails are made fresh, so if you don't consume it on the day it was sold, it won't taste as good," says Meinhold. "It's impossible to manage guest expectations once an item has left our restaurant. At this point, I'd rather people come and experience Phuc Yea in person."

"Yes, Miami is busy and restaurants are doing a lot better, but we are still making up for lost time," Bale tells New Times. "Any little bit helps in getting us back to where we should be."
KEEP NEW TIMES BROWARD-PALM BEACH FREE... Since we started New Times Broward-Palm Beach, it has been defined as the free, independent voice of South Florida, and we'd like to keep it that way. With local media under siege, it's more important than ever for us to rally support behind funding our local journalism. You can help by participating in our "I Support" program, allowing us to keep offering readers access to our incisive coverage of local news, food and culture with no paywalls.
Make a one-time donation today for as little as $1.