At the Katherine, Timon Balloo Tells His Family's Story Through Food 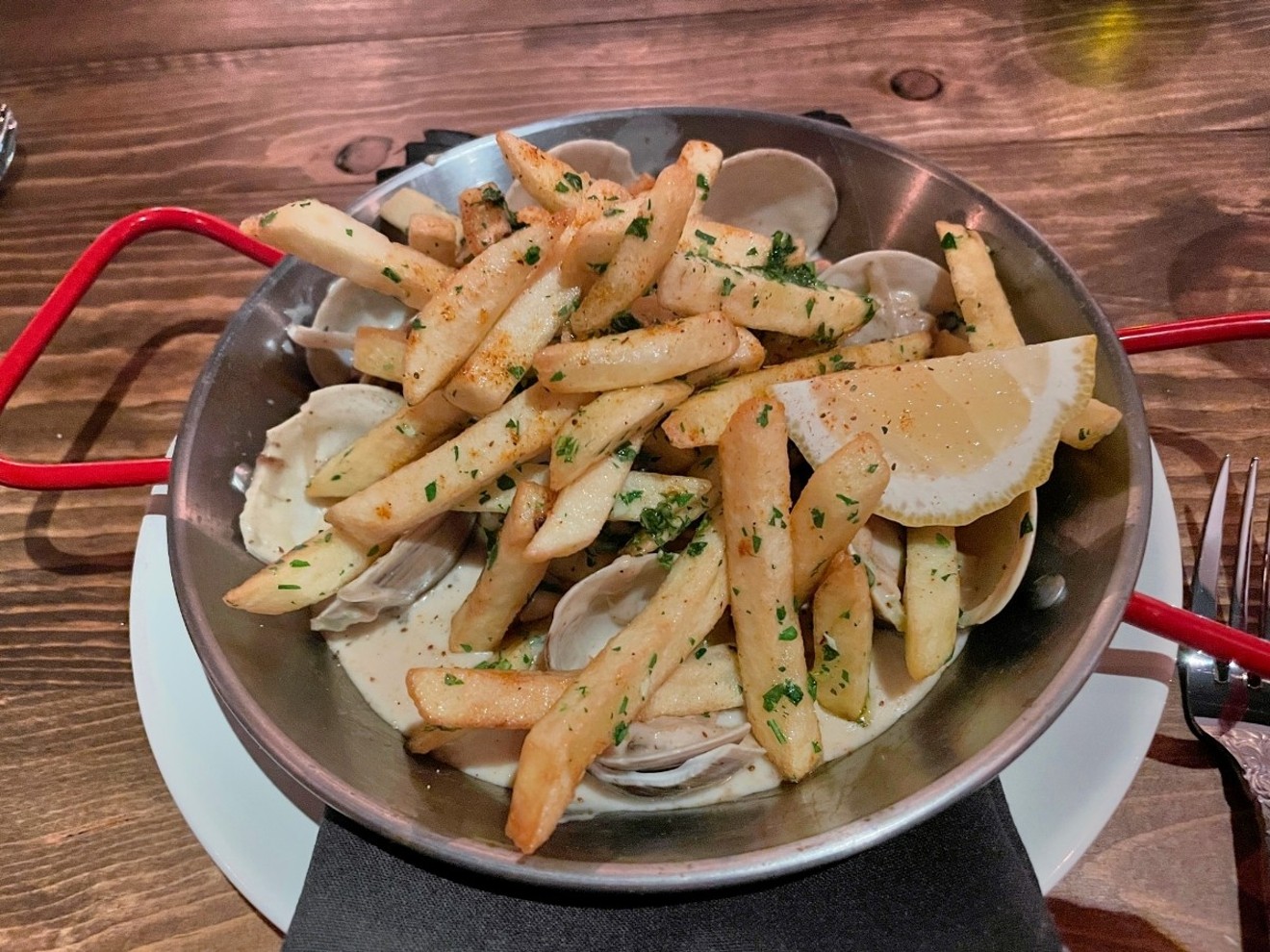 Clam chowder fries at the Katherine Photo by Laine Doss
They say all the great stories are love stories. If that's true, the same can be said about great meals. After all, providing nourishment can be considered one of the greatest acts of love.

Timon Balloo is no stranger to sharing his life story through his dishes.  At his downtown Miami restaurant, Balloo, the chef shared versions of the food he cooked for his family on his days off. The tiny 31-seat bistro was decorated with family photos, books, and objects from Balloo's home. Eating off mismatched china, guests were treated to dishes that tapped into his Chinese-Indian-Trinidadian heritage. Though the menu rotated, you could count on items like oxtail, roti, fried rice, and chicken thighs.

While that restaurant tapped into Balloo's roots, the Katherine explores the chef's love and family life. Named after his wife, Marissa (her middle name is Katherine), the restaurant, which opened last week, shares the couple's journey as romantic partners and co-heads of a family. (The Balloos have two daughters, Kirin and Sophie.)

Located in Foxy Brown's old space — the restaurant has moved a few blocks north — the Katherine is a warmly illuminated spot that is truly family-run. A visit last week found both Balloos working — Marissa doing front-of-house duty, Timon in the kitchen.

Timon Balloo tells New Times the couple acquired the space in October, whereupon Marissa set to work on the décor. "This was 100 percent our project and Marissa designed it all. We worked on the cushions on Thanksgiving while the turkeys were in the oven," Balloo reports. That soft leather upholstery on the banquettes? "They were sewn by Marissa's 88-year-old grandmother," he says, adding that Grandma insisted. 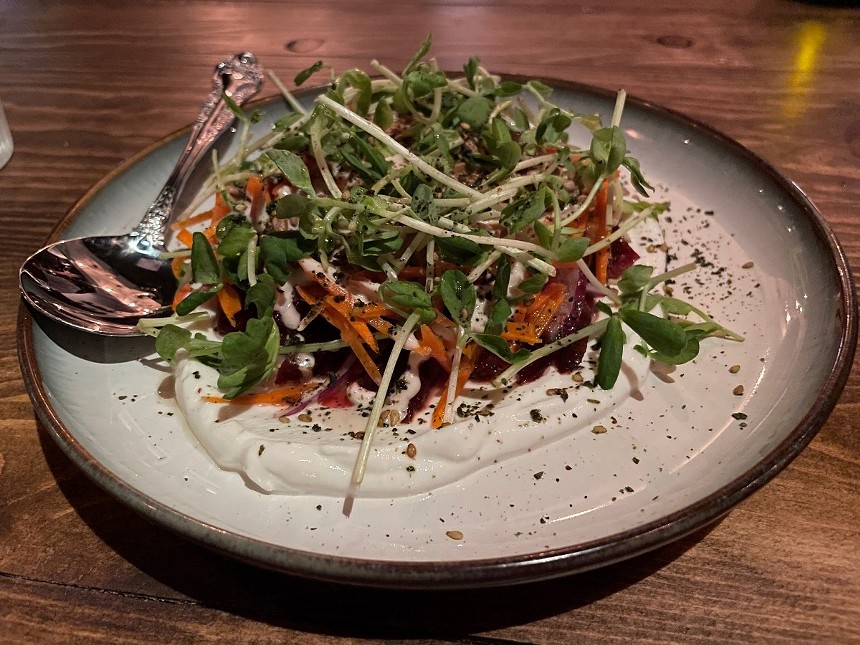 Za'atar beet and carrot salad at the Katherine
Photo by Laine Doss
The menu is equally personal; it's a representation of food the Balloos fell in love with on their travels and at home.

An order of clam chowder fries ($18), for instance, grew from Timon's days growing up in the San Francisco Bay area, coupled with time working in Belgium as an adult, mixed in with Marissa's love of clams and French fries. "After work in Belgium, we would have moules frites. Marissa loves clams and fries, so we thought up this mashup."  The fries, seasoned with Old Bay, are crisp and hot; the clams sweet and tender, rest on a bed of chowder. Whether you select the dish as an appetizer for the table, a side, or just sit at the bar with a glass of wine, order these fries.

Slow-braised duck orecchiette ($25) was inspired by visits to Italy. Says Balloo: "Everything is romantic there, and we fell in love with the good pastas — and each other." Balloo adds duck to the orechiette simply because he likes to work with it. "I love duck, and it was the best way to re-create the feeling we had there."

Balloo pays tribute to wife Marissa's roots with a Thai pineapple-and-shrimp fried rice ($23), made fragrant with crispy garlic and a shot of lime; and a charred cabbage and pork salad ($11).

Jerk grilled chicken thighs ($21), on the other hand, are a nod to Balloo's Caribbean heritage. Crisp on the outside and tender on the inside, the chicken is moist and the jerk seasoning provides a hint of sweet and smoky spice, though it never threatens to overwhelm the meat.

Other outstanding dishes include shrimp ceviche ($16) is marinated in a classic cocktail sauce and a delectable za'atar beet and carrot salad ($11) is tossed in yogurt and sprinkled with toasted sunflower seeds.

Balloo, along with sous chef Kevin Miyar and a small team devise a few off-menu dishes each week. Once everything hits its stride, Balloo says, he'll introduce roti to the menu.

"The size of the restaurant is intimate enough so that we can change the menu often without it feeling forced," he says of the dining room, which seats about 40. A small outdoor patio will open in the coming weeks.

The Katherine offers a small selection of local beers on tap ($6 to 7), along with small but interesting wine list.

The chef praises the area, observing that Fort Lauderdale is a city of neighborhoods. "There are pockets that look almost like Savannah. It's like taking a road trip without being in the car for too long," Balloo says, making the case for Miamians to venture the half-hour drive north.

And, he adds, many Miami restaurateurs and restaurants are already in Fort Lauderdale including José Mendín's Rivertail, Bodega, and Batch Southern Kitchen & Tap.

"From natural-wine bottle shops at F.A.T. Village to cocktails at No Man's Land, you're seeing a lot of people from Miami coming up here to recalibrate," he says.

The Katherine. 723. E. Broward Blvd., Fort Lauderdale; 754-216-0690; thekatherinerestaurant.com.
KEEP NEW TIMES BROWARD-PALM BEACH FREE... Since we started New Times Broward-Palm Beach, it has been defined as the free, independent voice of South Florida, and we'd like to keep it that way. With local media under siege, it's more important than ever for us to rally support behind funding our local journalism. You can help by participating in our "I Support" program, allowing us to keep offering readers access to our incisive coverage of local news, food and culture with no paywalls.
Make a one-time donation today for as little as $1.