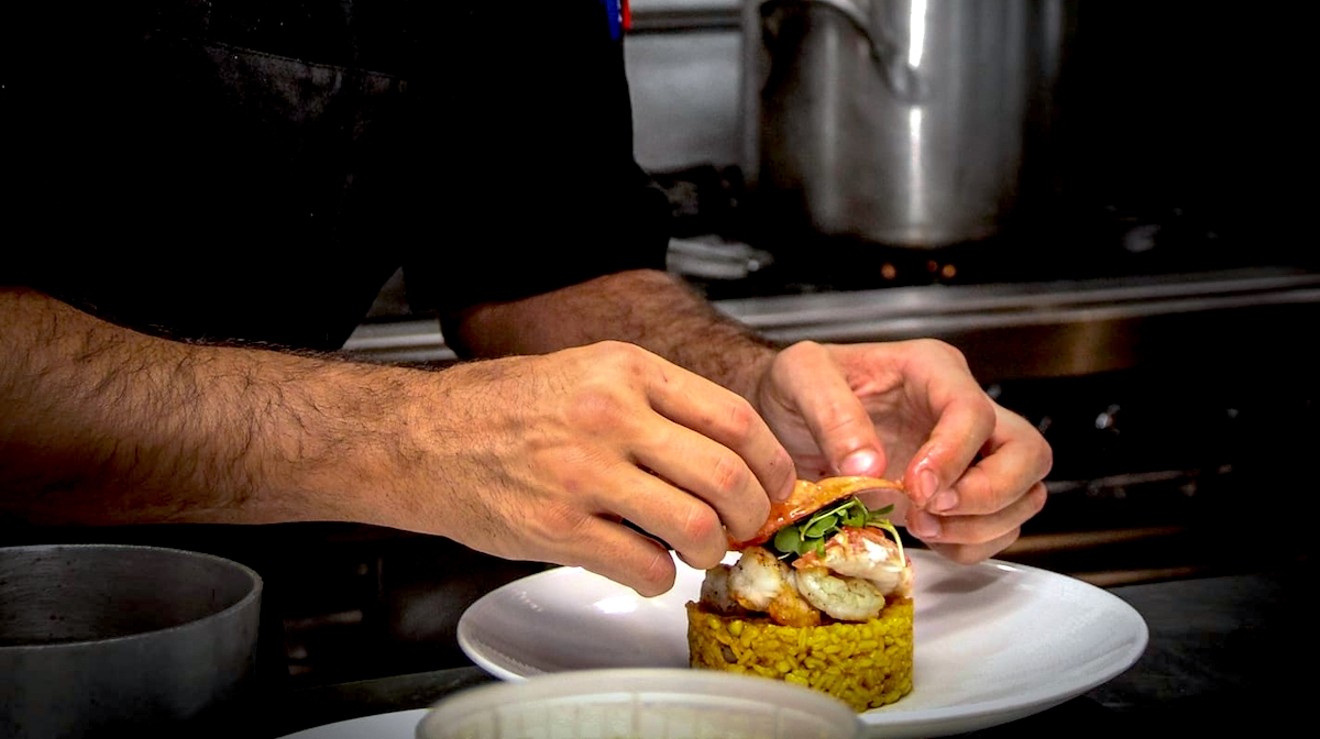 But what really sets Delray apart is its thriving restaurant row, Atlantic Avenue. With a vibrant, growing foodie scene, the town has undeniably become a dining destination in the heart of Palm Beach County and a laid-back alternative to more popular South Florida tourist hot spots such as Miami, Fort Lauderdale Beach, and Key West.

Locals frequent the quiet side streets, where hip watering holes and secluded dining rooms give some reprieve from tourist-laden eateries. Seasonal snowbirds flock to the mile-long stretch of Atlantic Avenue, where crowded dining rooms spill out onto sun-drenched sidewalk patios.

Delray is fully in its renaissance, so there's no better time to sample the city's bounty. Here are the ten best places to eat there. 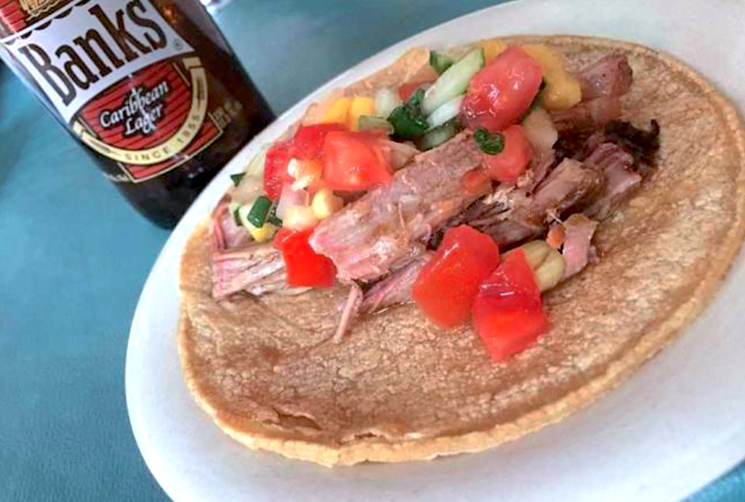 149 NE Fourth Ave., Delray Beach
561-749-0973
facebook.com/BambooFireDelray
When owners Donald and Beverly Jacobs opened Bamboo Fire Café in 2005, they quickly garnered a cult following for family-friendly homestyle Caribbean cooking. Not classically trained as chefs, they authentically replicate the dishes of their homeland, Guyana. This is the essence of what sets Bamboo Fire Café, well, on fire. Dishes include oxtail in a savory pepperpot brown sauce ($19), spice-laden jerk chicken ($15), tender cracked conch ($19), and a fish, lobster, and crab macaroni and cheese (market price). Seasonal and exotic items — think frogs' legs, shark, and golden crab — make rare appearances but are always worth ordering. And don't think of leaving without trying the rum cake ($8). 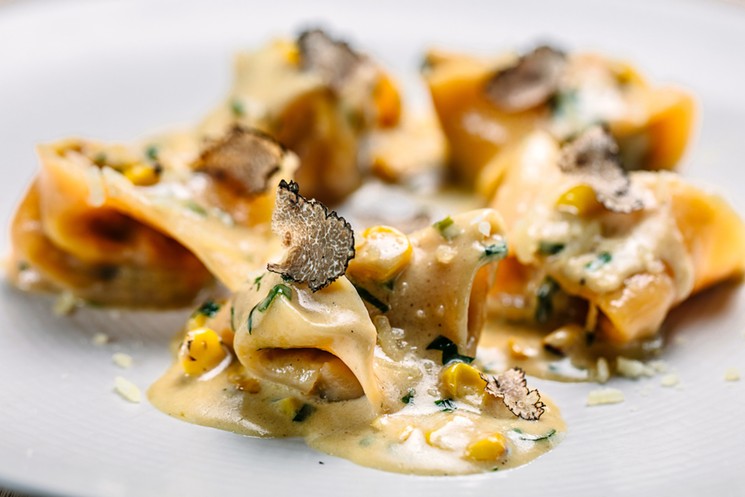 200 NE Second Ave., Delray Beach
561-274-2046
brulebistro.com
Tucked away just a few blocks off Atlantic Avenue in the heart of the Pineapple Grove neighborhood, Brulé Bistro has become a favorite of the locals and a must for foodie tourists. This chic-yet-casual bistro specializes in modern Mediterranean-American cuisine with a menu created by second-generation chef-owner Suzanne Perrotto. Established in 2008, the place boasts a vibe that is and friendly. An open kitchen produces vibrant, seasonal dishes with most everything made in-house. That means the pasta, bread, ice cream, and even the chef's famous chocolate chip cookies are handmade daily. While many dishes come and go with the seasons, permanent menu favorites include chicken meatballs spiced with ginger, coconut broth, cashew, and chili oil ($12); and, of course, the signature dessert: pistachio crème brulée ($9). 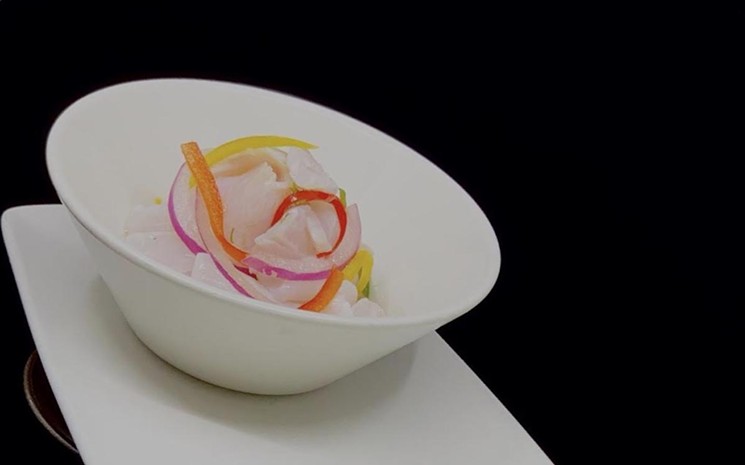 432 E. Atlantic Ave., Delray Beach
561-272-9898
cut432.com
It makes sense that Brandon Belluscio and Brian Albe, co-owners of Cut 432, are former bartenders. They've knocked the stuffing out of the steakhouse cliché and done away with the awful stigmas of the concept — no dingy lighting, cigar smoke, or old-man stuff here. They've replaced all this with a beautifully designed space that looks like a cross between a bullet train and the vestibule of an ice hotel, and these guys have a knack for keeping things lively in a small space. The steaks follow suit, with prime cuts of meat including the 36-ounce Porterhouse for two (as quoted), the 35-day dry-aged New York Strip ($49) and the bone-in rib-eye ($59). Pair them with knockout sides like the favorite blue cheese tater tots ($9 to $12) or lobster mac 'n' cheese ($18); appetizers like hamachi sashimi ($17) or Kobe beef tartare ($20); or go all out with a seafood tower that's served raw and chilled or baked. You can save room for the housemade desserts or order a martini instead: They're both decadent ways to end a meal here. 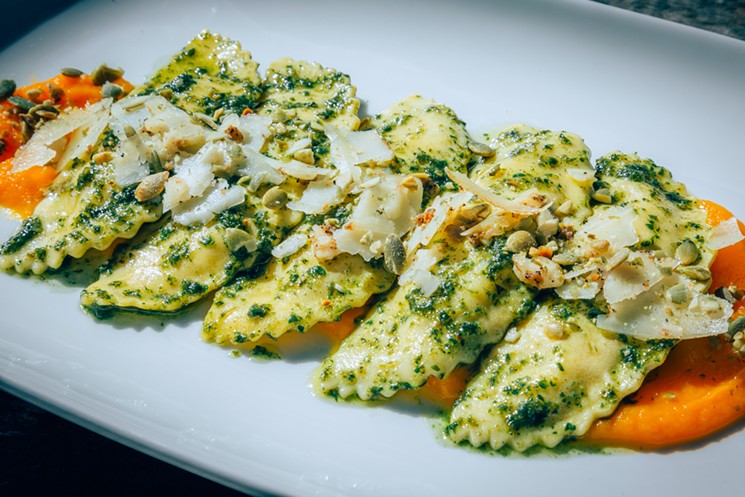 52 N. Swinton Ave., Delray Beach
561-330-3232
sub-culture.org
With its eclectic menu ranging from bacon-wrapped dates ($13) and crab cakes ($14.50) to chicken harissa ($20), Dada has been a fixture in the Delray Beach dining scene for as long as anyone can remember. You'll want to start with a seat at the bar — snug as it is — for one of the establishment's famous flavored mojitos ($12) before settling in for a multicourse meal. Portions are generous and the food is decadent, so sharing is encouraged. Servers recommend the house specialties including the roast duck ($28) and habanero-maple glazed salmon ($25). Dining here is a cultural activity, too. The restaurant doubles as a trip back in time, situated within one of the oldest historic homes in town — the Tarrimore house — built around 1924. While the dining room feels homey and buzzy, nothing beats a seat outside beneath the softly lit branches of the yard's massive banyan tree. 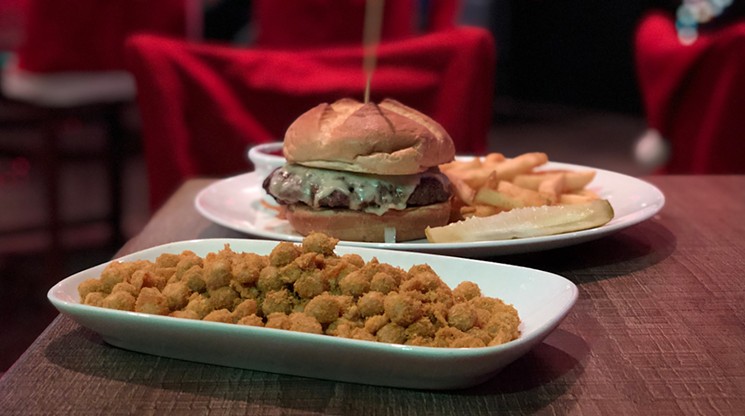 116 NE Sixth Ave., Delray Beach
561-808-8814
deathorglorybar.com
In 1979, "Death or Glory" was a popular song by the English punk band, the Clash. Today, it's a popular restaurant and bar on the west end of Delray Beach. With its just-off-the-beaten path allure, it's the type of neighborhood spot that gets you out of the tourist-heavy areas. That vision is thanks to a group of industry professional partners — namely Ayme Harrison, Isaac Grillo, Annie Blake, and April DeVona — who wanted a spot that offered great cocktails and food for the locals and crowd. That means it's a draw for both. Grab a drink at the bar before dinner, then order favorite dishes like dip du jour (for $9, a dip-style sandwich that changes with the chef's mood) or rock shrimp Diavolo, fat bucatini smothered in a spicy San Marzano tomato sauce ($25). Bar bites — served until 2 a.m. — include veggie-based dishes like shredded jackfruit sliders prepared like faux crab cakes ($15) or crispy fried chickpeas dusted with a Cheetos-inspired seasoning ($7). For dessert, head to the outdoor patio where a tiki bar out back transports you to a tropical paradise. 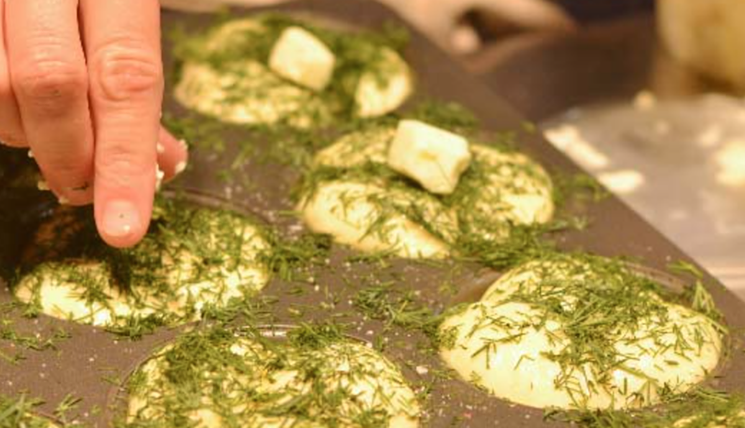 187 NE Second Ave., Delray Beach
561-266-3750
thegrovedelray.com
The Grove is the vision of chef-partner Michael Haycook and partner Paul Strike. They met while attending the Culinary Institute of America, back in 2003. went on to work the front of house at Area 31 in Miami, and Haycook was a sommelier at Zuma. But the duo created a true gem with its comfy, 26-seat neighborhood eatery in Delray Beach's Pineapple Grove. The focus here is fresh and simple: beautifully executed dishes made with the finest ingredients. Every two weeks, the menu changes completely. Over the last few years, expansion into an adjoining space has made room for a vibrant bar scene where you can sip from the restaurant's stellar wine selection and experience Haycook's love for Northern Califonia wine country; savor a well-made cocktail; or graze on the restaurant's small plates and snack items like house-made charcuterie, oysters, carpaccio, and ceviche served as part of a more casual dining experience. 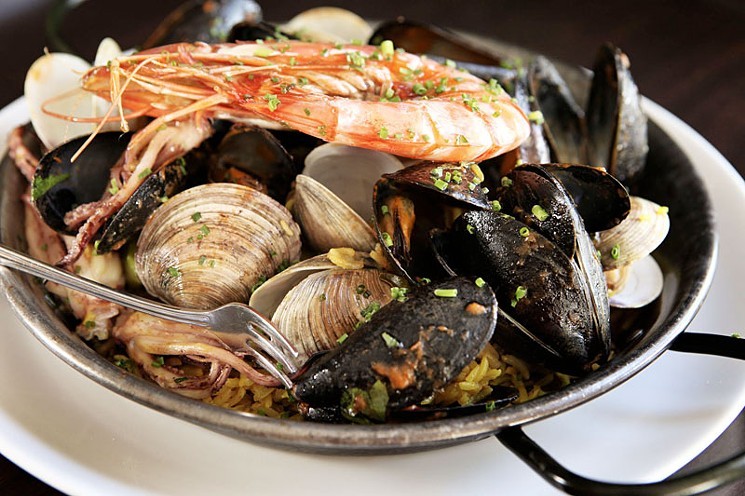 9 S. Swinton Ave., Delray Beach
561-865-5774
facebook.com/jimmysbistro
Without reservation, your chances of getting one of the restaurant's ten tables is close to .01 percent, so don't head to Jimmy's Bistro without calling ahead. Chef-owner Jimmy Mills' pint-sized eatery serves up an innovative American-Italian menu. Despite its location in the heart of downtown, the boutique establishment still manages to fly under the tourist-trap radar thanks to its clandestine location off Swinton Avenue. Even in the height of summer, regulars flock to chef-owner Mills' eponymous eatery. A well-traveled, classically trained chef, Mills has done well over the years with a handwritten chalkboard in place of a handheld menu. Homemade pasta and a roasted half duck have become favorites, and fish entrées change depending on what's supplied by Captain Clay and Sons Fish Market a few blocks north. All you need to complete the evening is a bottle of wine and some good company. 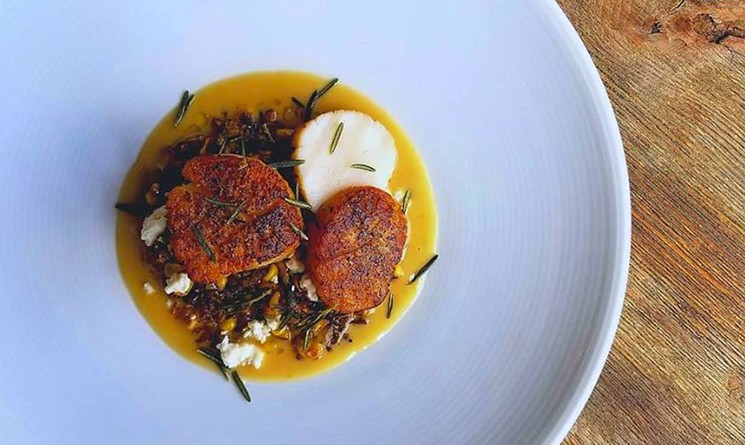 7901 W. Atlantic Ave., Delray Beach
561-499-2200
mia.kitchen
For Jason Binder, recognized as New Times' Best Chef 2016, it's the little things that count: finishing sauces with 20-plus ingredients that take two days to create; artfully designed plates that arrive at your table like tiny, colorful sculptures; and uncommon flavor pairings that deliver the coveted "wow" factor. After a 15-year career, Binder serves as both partner and executive chef for MIA Kitchen & Bar. Armed with a bounty of local produce and high-end meats and fish, Binder applies the tenants of a classic French technique to perform mouthwatering culinary feats. You can sample items from the main menu that changes several times a year or try something off the specials menu, which includes half a dozen dishes that present the best of the chef's most recent creations. New dishes are added daily and often feature one of his specialties: housemade gnudi, gnocchi-like ricotta dumplings that appear in a rainbow of flavors. The hardest part is actually eating the decadently-styled dishes: A splattering of vibrant sauces — strewn Jackson Pollock-like across the plate — manage to deliver on both beauty and flavor. 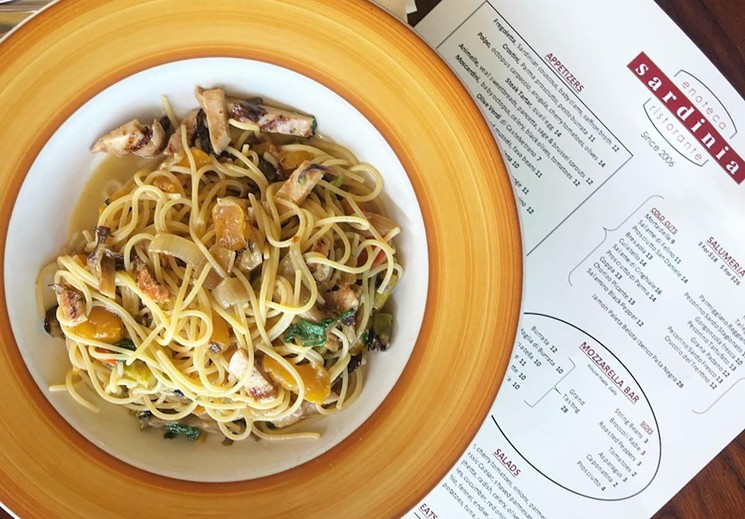 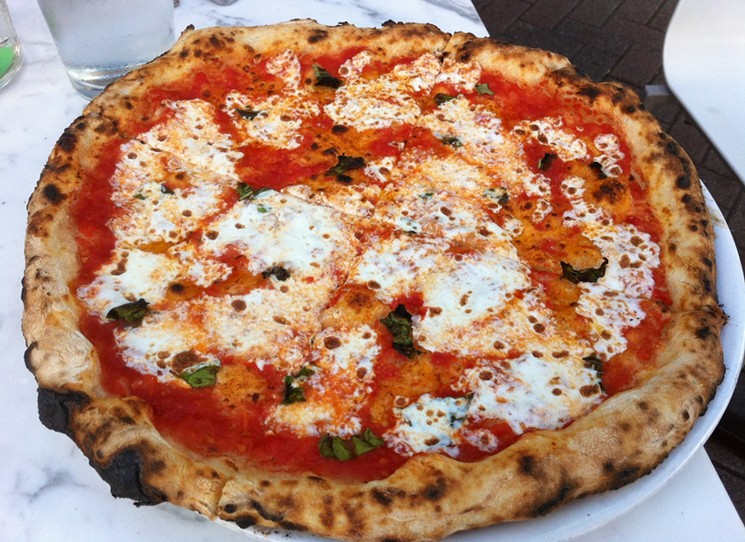 522 E. Atlantic Ave., Delray Beach
561-865-5923
scuolavecchiapizzeria.com
Scuola Vecchia translates into "old school," and what you get at this Atlantic Avenue Pizza spot is truly Old World-style. Recipes come straight from Italy, so if it's authentic fare you're after, you'll find it here. Among the best Neapolitan pizzas in the county, its housemade ingredients are cooked inside the Acunto wood-fired oven delivered straight from Napoli, resulting in a crust that is dense and chewy with just a touch of wood-fired flavor. But it doesn't stop there: the restaurant works closely with Roberto Caporuscio, president of Associazione Pizzaiuoli Napoletana, ensuring the organization's standards on everything from the flour's consistency to the tomato sauce and the temperature of the oven (950 degrees, to be exact). Try the Regina Margherita ($16): It requires an exact ratio of ingredients including cherry tomatoes, a light sauce, fresh basil, imported olive oil, and mozzarella. While the dining room is a fast-paced environment, the restaurant's design allows you to watch the action from wherever you sit. Of course, once your pizza arrives, it's all about savoring the moment.
KEEP NEW TIMES BROWARD-PALM BEACH FREE... Since we started New Times Broward-Palm Beach, it has been defined as the free, independent voice of South Florida, and we'd like to keep it that way. With local media under siege, it's more important than ever for us to rally support behind funding our local journalism. You can help by participating in our "I Support" program, allowing us to keep offering readers access to our incisive coverage of local news, food and culture with no paywalls.
Make a one-time donation today for as little as $1.