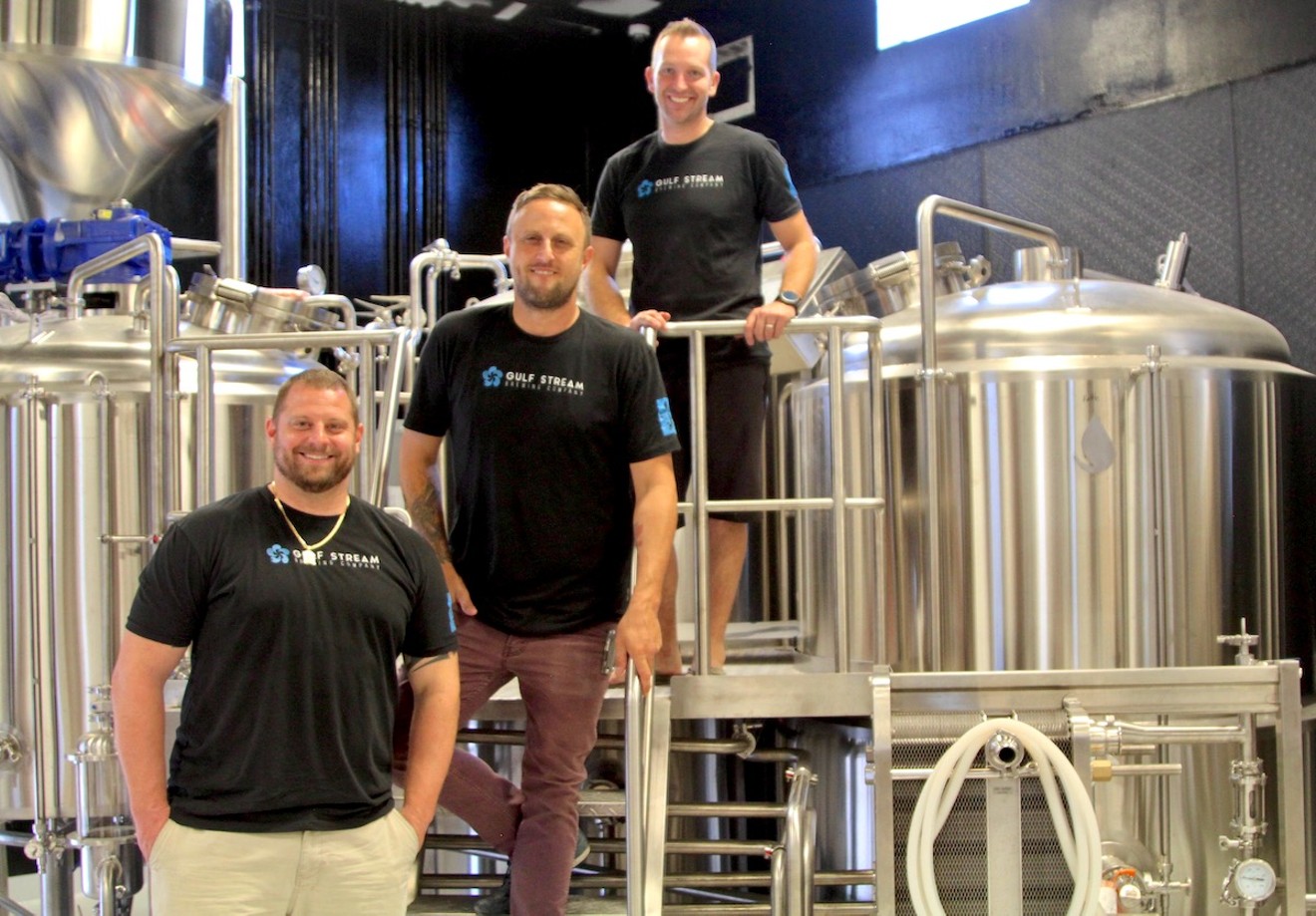 Founded in 2014 by co-owners Ty Eriks and McKay Ferrell, Gulf Stream Brewing will focus on creating a rotating selection of beers and several flagship offerings, while also offering the public a unique educational component.

At the helm of South Florida’s newest 10-barrel system will be head brewer Mike Demetrus, former brewmaster with Doral-based M.I.A. Beer Co. Demetrus brings with him 20 years of brewing experience, nine of which he's spent as a professional brewer.

Over the past decade, Demetrus has won over 30 awards and medals for his beer recipes in a number of competitions including the Festival of Barrel Aged Beers (FOBAB), Best of Florida, the US Beer Tasting Championship, and the national Can Can Awards.

Photo courtesy of Gulfstream Brewing Co.
"I'm really excited to be working on a smaller scale," said Demetrus. "Crafting small batch beers has always been my passion, and working on a 10-barrel system will allow us the freedom to create some truly unique beers. There's no better place for me to take my next steps [as a brewer] than Gulf Stream."

Behind the bar, 20 taps will offer guests an ever-rotating selection of styles, said Ferrell. Utilizing the brewery's one-barrel pilot system, part of that variety will include a series of experimental one-off beers that will offer patrons a chance to taste how various yeast and/or hops impact the complexity and overall profile of beer.

"I'd like for there to be an educational aspect to visiting the taproom," said Ferrell. "The plan is to brew base beers and hop or ferment small batches, each using a different strain of yeast — or single varieties of hop — allowing customers to taste the difference and determine what suits their palate best. We want our customers to ask questions about the process and what makes each beer different. On a personal level, helping educate and inform others who don’t typically drink craft beer is incredibly rewarding."

Photo courtesy of Gulfstream Brewing Co.
In the first few months, Demetrus says his main focus will be on creating ales and lagers alongside Gulf Stream's flagship beers. Demetrus also hopes to become one of the area's first breweries to focus on active culture sours, or sour beers that are actively fermenting upon serving.

Gulf Stream Brewing's opening day tap list will include a limited run of small-batch beers that highlight some unique offerings, from the Runnin' Trips Belgian Tripel that clocks in at 9% ABV and features yuzu, lemongrass, and coriander to the Botanka Tonk, a 7.9% ABV old-style ale aged with with Tonka bean and oak. They'll be on tap alongside a limited run of Demetrus' light lager, porter, hazy IPA, and an aged Russian imperial stout. The launch-day lineup also includes Gulf Stream's Mo Betta pilsner (5.3% ABV), What the Hef!? Bavarian-style Hefeweizen (5.3% ABV), Sub-Hop pale ale (6.0% ABV), and Marley session IPA (4.9% ABV).

Also available for sale will be a membership known as the "Batch One" club — a special reward program available only on-site and limited to the first 150 members. The membership starts at $100 and includes a discounted punch card, exclusive t-shirt, and an exclusive branded 17.5-ounce snifter. Crowlers will also be available for purchase.

"It's a strange time to be a new craft beer fan," said Demetrus. "These days, there's a lot of flavored stouts, crazy sours, and big IPAs everywhere you go. My goal is to create beer that is clean, approachable, and repeatable."

Gulf Stream Brewing Company. 1105 NE 13th St., Fort Lauderdale; gulfstreambeer.com.
KEEP NEW TIMES BROWARD-PALM BEACH FREE... Since we started New Times Broward-Palm Beach, it has been defined as the free, independent voice of South Florida, and we'd like to keep it that way. With local media under siege, it's more important than ever for us to rally support behind funding our local journalism. You can help by participating in our "I Support" program, allowing us to keep offering readers access to our incisive coverage of local news, food and culture with no paywalls.
Make a one-time donation today for as little as $1.