Tomato poke tacos made with vegan ahi tuna. Yeah, you read that right - vegan ahi tuna! Photo courtesy of Green Bar & Kitchen
We've all been there: You need a taco, and you need it now. So, salivating with anticipation, you race to the nearest Mexican restaurant only to discover lard-laden beans, chicken-broth rice, and servers whose eyes glaze over at the word “vegan.”

Your buzz has officially been harshed.

While Mexican cuisine is among the easiest to veganize, some clueless restaurateurs still recommend the fish tacos to their vegan customers. But what if vegan fish tacos were actually a thing? What if there were a way to satisfy your insatiable desire for those little, folded pieces of heaven and still stick to your vegan diet?

Here's a look at the best vegan taco options in Broward, vegan fish tacos and all! Tomato poke tacos made with vegan ahi tuna. Yeah, you read that right - vegan ahi tuna!
Photo courtesy of Green Bar & Kitchen
1. Green Bar & Kitchen. At last, a "fish" taco you can actually eat. Green Bar & Kitchen is rolling out their newest creation: tomato poke tacos. These unique delicacies are made with Ahimi, a tomato-based, vegan substitute for ahi tuna that boasts an appearance and texture that is said to be indistinguishable from raw tuna. Green Bar will kick the flavor up a notch by mixing the Ahimi tuna with ginger, wakame, and toasted sesame seeds, and then serve it in non-GMO corn tortillas topped with ginger-based firecracker sauce, cilantro and a side of black rice. The new tacos will be available in the next few weeks, but in the meantime, you can pop in for the mushroom and asparagus tacos made with roasted, herbed mushrooms, garlic aioli and cilantro. And since Green Bar & Kitchen is completely vegan, you can rest assured that your dish is clean, pure, and free from cross-contamination. 1075 SE 17th St., Fort Lauderdale, 33316, 954-533-7507 greenbarkitchen.com. 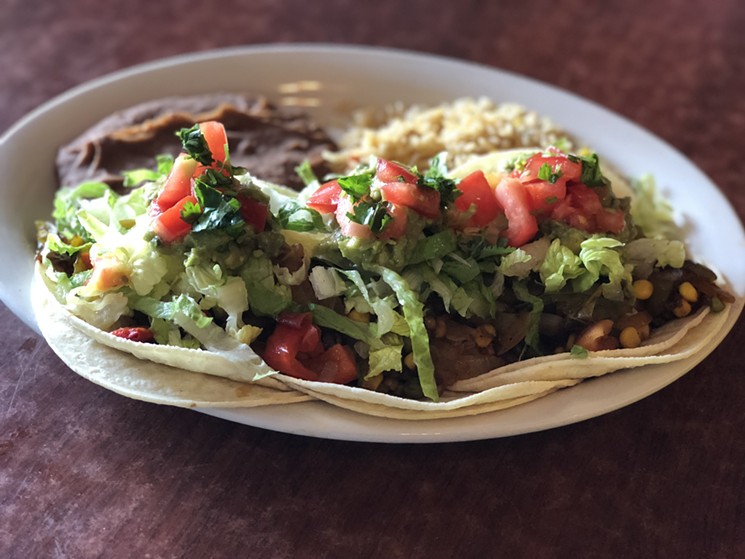 Vegan Tacos al Carbon are just one of the scrumptious vegan options at Tequila Sunrise Mexican Grill.
Photo courtesy of Tequila Sunrise Mexican Grill
2. Tequila Sunrise Mexican Grill. This authentically-decorated eatery makes our list as the Mexican restaurant with the most vegan options. They host an entire menu section of vegetarian and vegan delights, including wraps, burritos and Mexican pizza. But it is their vegan tacos al carbon that lands them on this list. A yummy blend of green peppers, red peppers, onions, mushrooms, tomatoes, peas, corn and black beans are charred on the grill, topped with lettuce, pico de gallo and guacamole, all served in soft, corn tortillas. And it all comes with unlimited chips and salsa. Wash it down with a fishbowl margarita in Tijuana Blue, Prickly Pear, Pomegranate, Amaretto-Orange or Melon, or hit them up during happy hour from 3 to 7 p.m., seven days a week for $2.99 draft beer, house margaritas, house wine, well drinks, and sangria. 4711 N. Dixie Hwy., Oakland Park, 33334, 954-938-4473. tequilasunrise.us. 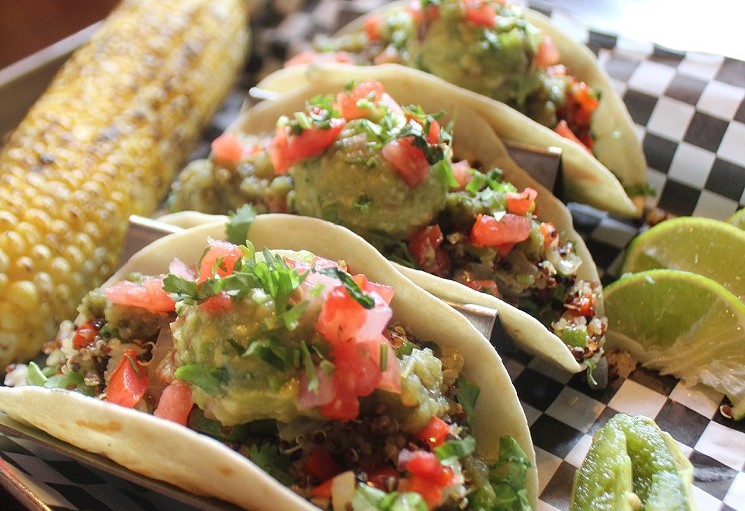 The new tri-colored quinoa tacos at Tatts & Tacos Beer Garden, served with vegan elote street corn.
Photo by @richerichpix, courtesy of Tatts & Tacos Beer Garden
3. Tatts & Tacos Beer Garden. If you prefer a little ink with your tacos, Tatts & Tacos Beer Garden is the place for you. The tattoo-art-inspired concept of this indoor/outdoor restaurant and beer garden is all about food and fun. It’s got a hip vibe, with mega-sized Jenga games, cornhole, dominoes, loud music and a wide selection of craft beers. From the nopales tacos, made with cactus pads, salsa verde, pico de gallo, guacamole and fresh cilantro, to the sautéed portobello tacos and refried bean tacos, Tatts has the vegan thing down. And they are super pumped about their tri-colored quinoa taco, which will debut on their new menu in the coming weeks. Three soft, corn tortillas are piled high with tri-colored quinoa, sautéed green and red peppers with onions, chopped romaine, salsa verde, pico de gallo, guacamole and fresh cilantro. These tasty tacos are served with a side of elote street corn on the cob (prepared vegan, of course). 3200 N. 12 Ave., Oakland Park, 33334, 954-533-0907, tattsandtacos.com. Lettuce Boat Tacos at Green Wave Cafe: raw, vegan and fresh. Don't miss this boat!
Photo by Brooke Rosenblum, courtesy of Green Wave Cafe
4. Green Wave Café. Tacos, like people, come in a rainbow of colors. And that is a beautiful thing. At Green Wave Café, the tacos are green. And raw. These delicacies are guaranteed to satisfy everyone from raw food vegans to health-conscious omnivores. Green Wave’s lettuce boat tacos are made with a “meat” that is prepared by soaking walnuts and sunflower seeds and then processing them with garlic and salt. Their creamy, Mexican “cheese” sauce is made from soaked cashews, lemon juice, red pepper, salt and garlic mixed with a special blend of spices. These are then layered into a romaine lettuce “taco shell” and topped with freshly-made guacamole and salsa. If that is not enough to whet your appetite, the tacos come with your choice of soup (like cream of sweet potato, nacho, or lentil) or kale salad made with fresh lemon or lime juice, sea salt, garlic, and if you desire, their special blend of cheesy seasonings. 5221 W. Broward Blvd., Sunrise, 33317, 954-581-8377. greenwavecafe.org. Your new Monday addiction - tofu tacos at TacoCraft.
Photo courtesy of TacoCraft
5. TacoCraft. I once watched a meat-eater pound down five TacoCraft tofu tacos in one sitting, and that kind of says it all. Whether you are vegan or not, it’s hard to get enough of these soft, corn tortillas stuffed with achiote-marinated tofu, charred pineapple (genius!) and cilantro. The bummer is that the tofu tacos are only available on Mondays, but the good news is if you are there between 4 through 7 p.m., the drinks are half priced. If you find yourself at TacoCraft on any other day of the week, however, you will not be disappointed. Try the kale and sweet potato tacos made with avocado, black beans, cilantro-lime crema and radish; or the exotic shroom tacos with roasted corn and cilantro. The tacos come with cotija cheese and crema for you vegetarians, but if you are vegan or dairy-free, make sure to order them without. The vibe at TacoCraft is funky and hip, with muraled walls and indoor and outdoor seating in the heart of the Riverfront party scene. They have an impressive collection of tequilas and tantalizing margaritas, making it the perfect place for dinner and drinks before hitting the clubs, or for that late-night snack attack. 204 SW Second St, Ft. Lauderdale, 33301, 954-463-2003. tacocraft.com.
KEEP NEW TIMES BROWARD-PALM BEACH FREE... Since we started New Times Broward-Palm Beach, it has been defined as the free, independent voice of South Florida, and we'd like to keep it that way. With local media under siege, it's more important than ever for us to rally support behind funding our local journalism. You can help by participating in our "I Support" program, allowing us to keep offering readers access to our incisive coverage of local news, food and culture with no paywalls.
Make a one-time donation today for as little as $1.