Miami's DJ Irie is the industry standard for what arena DJs are supposed to sound like, and he's the NBA's official DJ, which puts a lot of pressure on our other arena DJs to step their game up. One local jock stands out above the rest of Irie's competition. When the Florida Panthers brought in music director Brian Lenihan two years ago, they thought hiring a house music DJ would be the key to getting fans on their feet. Last year, Lenihan DJ'd and mixed tracks during Panther home games, but fans wanted a more traditional sound. Instead of staying the course, Lenihan has found middle ground and brought back the old-school organ rock. What he still brings from his days as a house DJ is being able to read the energy of the crowd and cue up different rock tunes depending on the situation. Of course you'll hear "Rock, n' Roll Part 2" by Gary Glitter after goals are scored, and Zombie Nation's "Kernkraft 400," the annoying club anthem that's only appreciated in a hockey setting. But he's not afraid to throw in some Tool or Soulja Boy, or some Top 40, which is unheard of in most hockey arenas. He's relatively new to the field but as he stays on top of cutting edge music, Lenihan is already developing a sound that's making him one of the top DJs in hockey.

With those huge tigress eyes, that expressive yet low-key voice, and her girl-next-door smile, Laurie Jennings is the mother of all news anchors in South Florida. She's also the mother of twin boys, as all the veteran news watchers in Broward and Miami-Dade know. That's what really makes Jennings stand out — she's got a story behind her and she's been around long enough for people to know it. The young star left WSVN-TV after five years for New York City and MSNBC, stayed for a year, and returned to WPLG because she loves South Florida and wanted to start her family here (that's the story, anyway). And who wouldn't want to hang with Dwight Lauderdale, the coolest dude in South Florida history (may he retire in peace)?

We're convinced: before you can become a female news anchor, you are required to attend robot school. Here you and other news anchors are trained to look and act exactly like one another — the same highlights, the same shoulder-length haircut, the same vapid, monotonous voice, which you will then use consistently to describe forces as varied as hurricanes, Iraq, and Diddy's wardrobe. The question is: how did Channel 7 anchor Belkys Nerey escape this evil institution? (We know, she probably charmed her way past the guards; plus, she was probably wearing a really cute outfit to distract them!) Whatever; we're glad she got away, because with her unique tough-Cuban-pixie aesthetic, she helps make WSVN the most watchable newscast in town. Reporters like Carmel Cafiero ("Carmel on the Case") and Howard Finkelstein ("Help Me Howard") bring it home with just the right formula of hard news and kitschy "We're-here-to-help-you-Neighbor" kind of stuff that TV audiences slurp up. The station hit a grand slam with Deco Drive, its locally-produced entertainment show — kind of like Inside Edition with South Beach as the backdrop. Furthermore, as a FOX affiliate, Channel 7 brings us the best national show on network TV — The Simpsons. And we hate to admit it, but it gives us what we want (and want and want): American Idol two nights a week.

Since 1941, Ta-boo has been a bar and bistro for the well-to-do. Sinatra, JFK, and countless socialites have dined there. It's even said that the Bloody Mary was born at Ta-boo, stirred up to soothe a hangover for troubled Woolworth heiress Barbara Hutton. Considering its high-society credentials (and address), the fare at Ta-boo is refreshingly unpretentious — there are sandwiches, salads, and even pizzas. The prices, too, are surprisingly accessible: $17.50 for a salmon dinner entree; $12.95 for a bacon-topped cheeseburger at lunch. The decor is tasteful-Old-Florida-vacation-spot-meets-safari, with chairs upholstered in zebra print fabric and plants dripping leaves everywhere. Intricate woodwork adds a dash of Morocco or India into the mix. It's the perfect place to soak in the wealth of Worth Avenue without having to drop a month's salary on, say, a designer shirt. 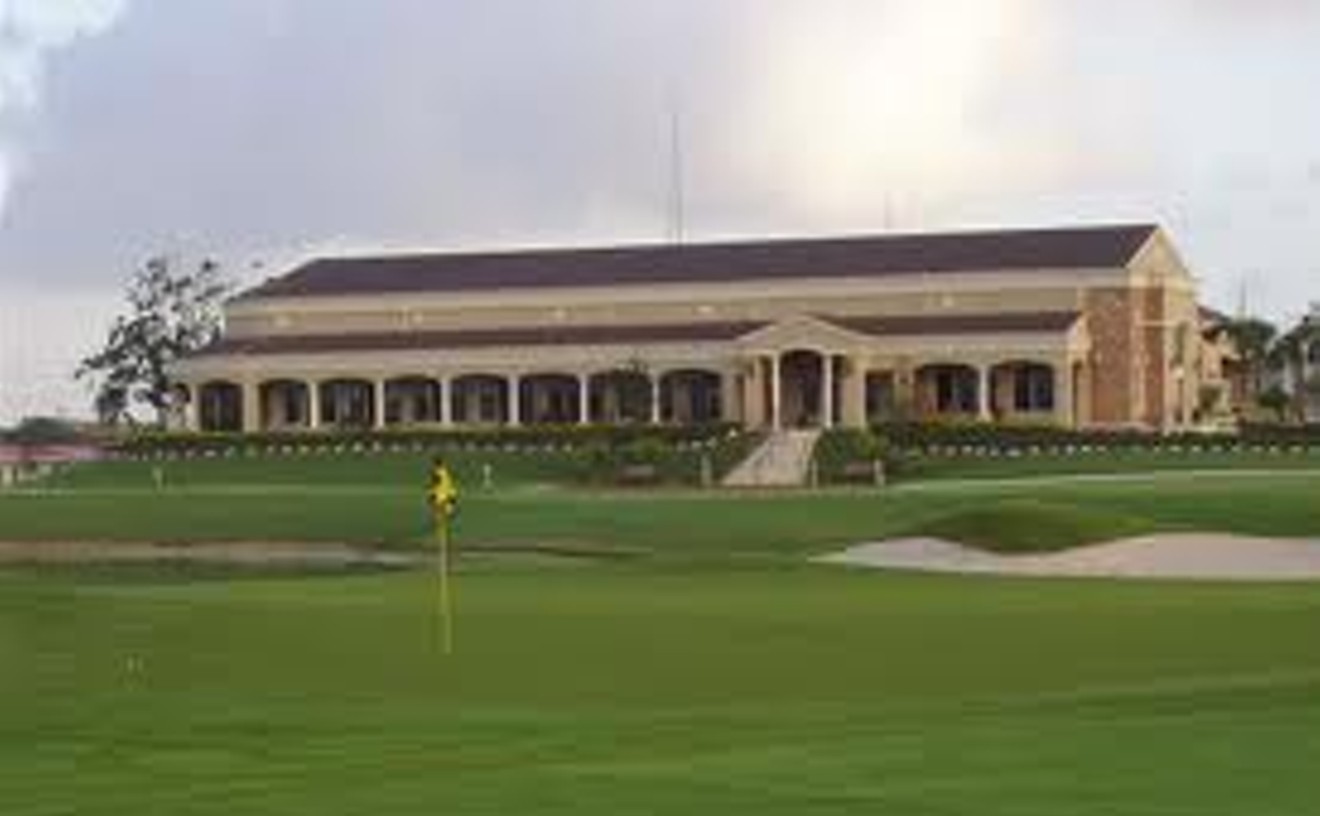 Well, we've pretty much done it. Gone off and destroyed just about all the natural beauty of this place from the Sawgrass Expressway to A1A. That's why little oases like Plantation Preserve are so treasured. The preserve is an old golf course that was abandoned for years until the city recently renovated it. And give them some credit — they did it in style. Not only is the course one of the best in the county, the 1.5-mile linear park, routinely utilized by nearby residents, is a godsend. Suddenly, just a couple stone's throws from a Publix and strip mall across Broward Boulevard, the visitor is transported into the Everglades (it was all Everglades west of State Road 7 at one time). Herons, ibises, anhingas — you name the bird, it's there. And it's quiet. Whether you want some exercise or just a break from the storm of sprawl living, Plantation Preserve is a good place to do it.

A good weatherperson is so much more than a conveyor of information. He (or she, but in this case, he) should be even more than an expert meteorologist. Especially living in this sunny-one-minute-stormy-the-next part of the country, the best weathercaster should be an expert in the science of human emotion. And Phil Ferro, the main man at 7 News, is smooth enough to deliver even the worst weather news with the warm tone of an acceptable and agreeable stepfather — the kind of guy who might even understand if you told him you totaled the family car trying to impress a girl. Born in Cuba and raised in Miami, the Emmy-nominated Ferro started predicting precipitation in Spanish on Telemundo 51. To hear him call the clouds a couple times a night is to witness a world-class artist working his magic. Even if you're tuning in to learn a devastating hurricane is on its way to your front door, if it's Phil Ferro delivering the news, things aren't so bad.

We booked the last-minute cruise on a tequila-infused whim. But just as the credit card went through, the feeling of dread poured over us: OMG, the Vegas-style shows might be really cheesy! Grannies will surround us at the slot machines! Bartenders, holding us hostage on the ship, could get away with charging $20 a drink! We marched to the port as though it were a death camp. There, however, we saw that half the passengers were college girls in bikinis. Our jaded hearts defrosted when the lovely Romanian waitress brought us three desserts apiece. And we actually snorted with laughter when the on-board comedian did an entire set of jokes about snorkeling and beating his kids. If she'd had guts enough to enter, my sister would have won the Hairy Chest Contest, too. In addition to all that, the ship includes a water slide, a jogging track, a mini-golf course, and a gym. (Ever try yoga while a boat is rocking?) At press time, a two-day Bahamas getaway was going for $389. A five-day run to Jamaica and the Cayman Islands — with a window room — could be had for $479, what you'd otherwise pay in hotel costs alone. As we motored past Cuba, sitting in the hot tub while sipping piña coladas (only $5!), we admired our new luxury watches (bought duty-free!) and cursed ourselves for getting smoked at karaoke by those grannies.

Nobody expected Oscar the Featherless Bird to become a pheenom. When she arrived at the Broward County Humane Society 12 years ago, she was in bad shape (that's right, Oscar's a girl). She was sorely afflicted with what's known as "beak and feather disease," a grinding, degenerative condition that shortens the lifespan and strips an afflicted bird of its plumage. Veterinarians gave the struggling cockatoo an outside chance at living another six months.

The warm-hearted staffers at the Humane Society, impressed by Oscar's indomitable spirit, took her under their wings and made her the shelter's resident mascot.

TLC has done well by Oscar. By now, she has long since outlived all lifespan predictions, and she's become a celebrity. As far as Oscar is concerned, the Humane Society is a booking agency, and it's easy to see why the media flocks to her. Call her an embodiment of the Subtropical Life: she's quirky, often erratic, and she shows a lot of skin.

New Times stopped by for an interview recently and found Oscar exhausted. She had already chatted with another reporter that day, done some video of her latest dance steps for the Ellen DeGeneres Show, and turned down a television request for Jimmy Kimmel Live! But like the true classy celeb she is, Oscar (via her human interpreters) spent a few minutes answering our questions.

NT: In any great horror or sci-fi film there's always a hero and a villain; which character do you associate with most?

Oscar has always been an underdog of sorts, a true champion when facing adversity, so she feels a deep connection with the virtuous heroes of the silver screen.

Which movies do you most identify with?

Her video library is extensive. Oscar has always had a fondness for Hitchcock's The Birds, although she feels conflicted while watching it. And on rainy afternoons, she likes to pull out her old VHS copy of Treasure Island — she's always felt a kinship with Long John Silver's parrot. Had she been born in a different time and place, Oscar's certain that she, too, could have navigated the seas in search of fortune.

Christine Dolen is a busy writer with a busier mind. Her range is large: she can find a funky angle or a weird hook for just about any story, and she is always more interested in celebration than analysis. Maybe half of her writing constitutes real criticism; the rest is an attempt to get the Herald's readership in touch with what's vibrant, exciting, and alive about SoFla theater. To that end, she'll occasionally whip up a sentence that would look more at home in The New Yorker than in a SoFla daily, like this one about the big cheese at The Women's Theatre Project: "This is Meredith Lasher's life: planted atop a 14-foot ladder, she hangs theater lights as she talks about a grant application." No one else in the theater community would have bothered to check the ladder height, but that's Dolen. She doesn't miss a trick. In the name of comprehensive coverage, she began a blog last year (called "Drama Queen," which you can access from www.miamiherald.com) where she posts everything that's important. From dish about new plays or the goings-on at college theaters to a blow-by-blow on The 24 Hour Theatre Project and some righteous bitching about the Carbonells, Christine wants to tell you about it.