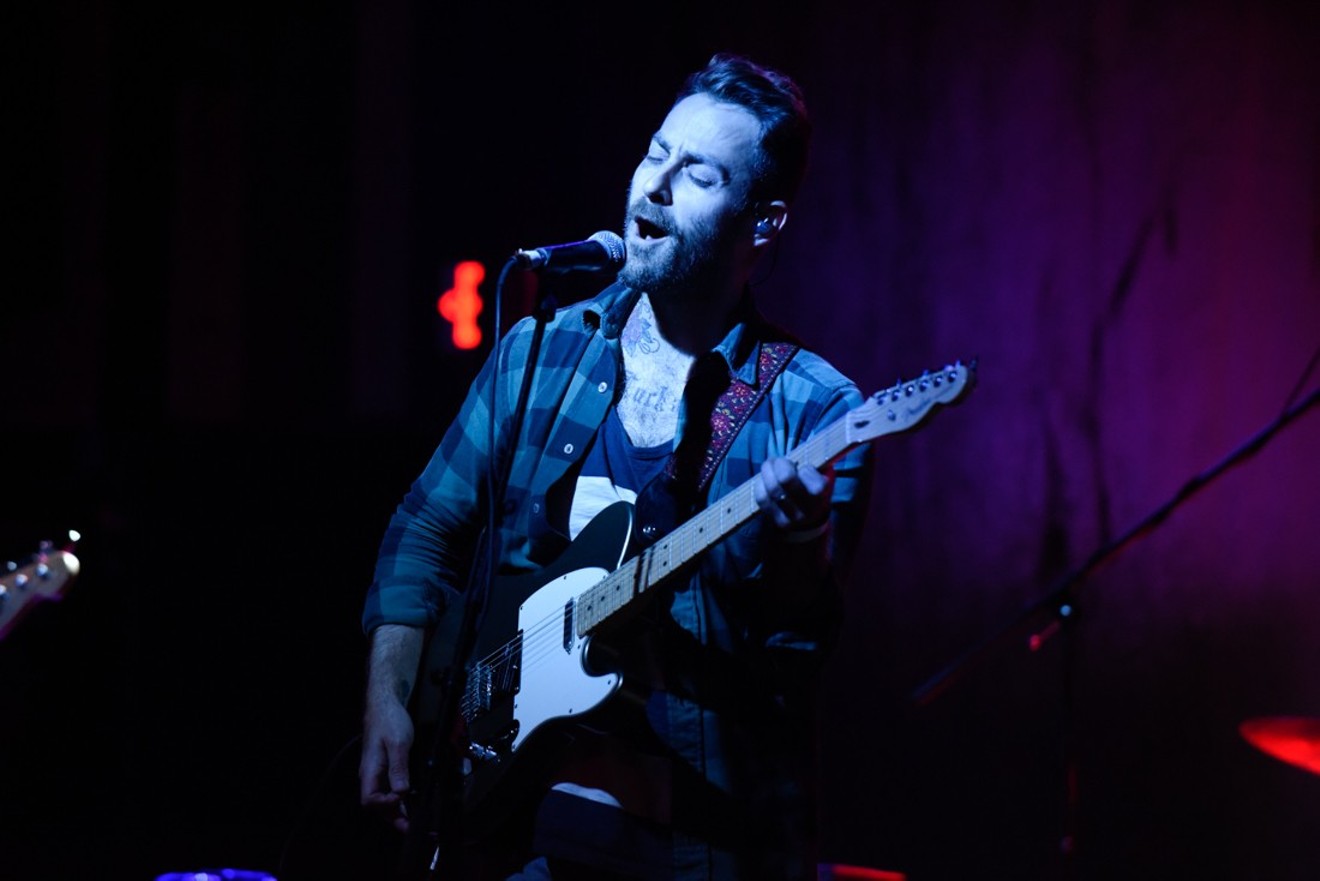 View more photos of American Football's performance at Revolution Live here. Photo by Michele Eve Sandberg
Filing into Revolution Live in Fort Lauderdale to see the seminal emo act American Football, you'd be forgiven for not knowing the band's highly influential debut came out nearly 20 years ago. was a crowd of fresh-faced youngsters piled in to watch a group of guys who could be these kids' dads play music suffused with melancholy and beats that rarely surpass a steady 120 BPM. Yet the excitement was palpable, electric. That's a tribute to the keen songwriting of longtime indie mainstay Mike Kinsella, of Cap'n Jazz, Owen, and Joan of Arc fame. Kinsella has left an indelible mark on this brand of unapologetically gloomy rock, but he and his band, consisting of original players Steve Holmes and Steve Lamos, along with newcomer Nate Kinsella on bass, play with a verve and sophistication that give an airiness to even the dourest tracks.

Before American Football took the stage, though, fans were treated to a rapturous set from the Florida band You Blew It!, whose members quick to note how elated they were to be "playing with their idols." The influence is notable, but the band is its own beast, a bit jauntier and more inclined to fist-pumping dynamic changes and sprints of intense riffing. Frontman Tanner Jones' emoting has evolved from a ragged yelp to a more relaxed croon, but lines such as "I don't feel like myself/Or anyone else" still delivered with a seething twinge recognizable from the band's nascent days.

View more photos of American Football's performance at Revolution Live here.
Photo by Michele Eve Sandberg
The basic components of emo are all there — diary- lyrics laid over alternately sparse and churning guitars — but the band throws enough musical left turns into the mix to keep the formula sounding fresh while still inspiring the kind of headbanging exaltation usually reserved for heavier acts. This is in no small part due to the interplay between dual guitarists Trevor O'Hare and Andy Anaya, who can push sonic air and create cavernous space as needed. The songs are anchored by the intersection of bassist Andrew Vila and drummer Matthew Nilsey, who steadfastly ensure the music never strays too far from a central groove. The bandmates exchanged jovial smirks while ripping through material from their discography, including tracks from their well-loved 2014 LP, Keep Doing What You're Doing. For what it's worth, they also insisted on climbing onstage to Vitamin C's "Graduation (Friends Forever)," played at a pretty unreasonable volume.

After a short interlude, the members of American Football modestly emerged, guitars in hand. Thunderous cheering ensued, soon giving way to exuberant "ooh"s as the band launched into a familiar standout from its debut, "Stay Home." They played against a backdrop of the art from their 2016 LP, an inside shot of the instantly recognizable house that adorned their debut, this time a cracked door instead of a lit bedroom window. The air of mystique wrapped in the familiar stillness of home is an image that still resonates with the band's wistful yet buoyant sound.

Their newest record is undoubtedly a spiritual successor to the debut but employs a more restrained, adult approach to the structures and lyrical themes that have defined the band. New songs like "My Instincts Are the Enemy" slotted in nicely next to their well-worn '99 material, but the crowd was notably more amped for classic cuts such as "Honestly?" whose extended coda was adorned here with extra lyrics and more guitar-crunching heft.

The set was rife with pretty, tessellating patterns and locked-in, odd-metered timing, the players perfectly synced and seemingly unable to misstep. Comically, some of the loudest howling from the crowd reserved for moments when an auxiliary bandmate would enter the stage with a variety of shakers for extra percussive thrust — by the set's close, it had become a sort of in-joke that Shaker-man was the show's true MVP. Another moment of levity came when Mike Kinsella declared it was "time to lay down," and did so, singing the bulk of "I'll See You When We're Both Not So Emotional" while reclining on the stage floor, tambourine in hand. (He later noted it was "nice to get applause for laying down when out of the house instead of being told to get up and do shit.")

View more photos of American Football's performance at Revolution Live here.
Photo by Michele Eve Sandberg
That the band doesn't take itself incredibly seriously is a welcome respite from lyrics such as "So let's just pretend that everything and anything between you and me was never meant." That gut-wrenching line is from fan favorite "Never Meant," which was wisely reserved to close out the show with ample bombast. After another round of cheers and promises from the band to return soon — "I don't know what took us so long to play here," Kinsella admitted at one point, along with "We're going to come back every month" — the packed venue emptied into the relatively cool night, the crowd itself a reflection of the mirrored anxiety and elation of youth that the bandmates have worked to encapsulate since they were roughly the age of the attendees.

- "Stay Home"
- "The One With the Wurlitzer"
- "My Instincts Are the Enemy"
- "Honestly?"
- "Home Is Where the Haunt Is"
- "You Know I Should Be Leaving Soon"
- "Born to Lose"
- "Give Me the Gun"
- "For Sure"
- "I'll See You When We're Both Not So Emotional"
- "Desire Gets in the Way"
- "Where Are We Now?"
- "The Summer Ends"
- "Never Meant"
KEEP NEW TIMES BROWARD-PALM BEACH FREE... Since we started New Times Broward-Palm Beach, it has been defined as the free, independent voice of South Florida, and we'd like to keep it that way. With local media under siege, it's more important than ever for us to rally support behind funding our local journalism. You can help by participating in our "I Support" program, allowing us to keep offering readers access to our incisive coverage of local news, food and culture with no paywalls.
Make a one-time donation today for as little as $1.
David Bennett