Björk Delivered a Mezmerizing Stripped-Back Set at the Arsht Center

Björk made her Miami live debut at the Adrienne Arsht Center for the Performing Arts on Sunday, February 13. Photo by Santiago Felipe
With all the hype that surrounded Björk's COVID-interrupted Cornucopia concert tour, which was billed as her most elaborate stage show to date, it might have felt as though Miami was going to receive a somewhat lesser show for the Björk Orkestral performance.

And yes, Orkestral lacks Cornucopia's audiovisual wow factor — but seeing Björk reinterpret some of her best-known songs to fit the "unplugged" aesthetic is no less thrilling. Free from Cornucopia's conceptual ties to the singer's 2017 album, Utopia, Orkestral is able to deliver the "hits," so to speak, in a way that Cornucopia could not.

That was evident on Sunday night when Bjork took the stage at the Knight Concert Hall at the Adrienne Arsht Center for the Performing Arts. The night's setlist, which could be previewed before the show started thanks to a posted QR code, showed the performance would rely heavily on tracks from 2015's Vulnicura and 1997's Homegenic. Oddly, not a single track off Utopia was featured. (Fan favorites like Debut, Medúlla, and Biophilia were also notably absent.)

But that didn't seem to bother anyone in the crowd. Björk had never performed live in Miami, so it felt like a rare treat to see an iconic musician finally grace the stage in our city.

When she walked out on stage in a gorgeous pleated dress that resembled an elaborate kimono with her face adorned in metallic shielding, the hall erupted in applause as the singer went straight into "Stonemilker." Behind her stood Icelandic conductor Viktor Orri Árnason and a 32-person string orchestra made up of local musicians.

Björk was backed by a 32-person string orchestra.
Photo by Santiago Felipe
By the second song, "Aurora" (the only Vespertine track performed), the orchestra was showing its dexterity, employing pizzicato to mimic the microbeats of the original track.

Being an "unplugged" performance meant that Björk and her team had to get creative in order to evoke the sonic textures heard on the recordings. And in an age when even live performances often use backtracks and real-time pitch correction, it was refreshing to see someone with Björk's vocal prowess go at it alone. There was no choir nor any prerecorded accompaniment to help her out.

And Björk's power has always come from her vocal delivery. She can go from a whisper to a growl in a second. And despite her years performing live, her voice remains as flawless as ever and almost indistinguishable from what you hear on recorded tracks.

The night's most memorable performance may have been "Black Lake," the painfully raw breakup song off of Vulnicura. The song featured several pauses that injected a sense of exhaustion and defeat. It also had the unintended effect of confusing the audience, which never knew for sure if the song had ended.

After the agony of "Black Lake," Björk gave the crowd what they wanted: the hits. And while she doesn't have a chart-topping selection in the traditional sense, fans definitely have their favorites. Homogenic opener "Hunter" is tailor-made for an orchestral performance, even if it lacked the original's ominous drumming. And Post standout "Isobel" is perhaps of the more gentle tracks off an album dominated by trip-hop and jazz. 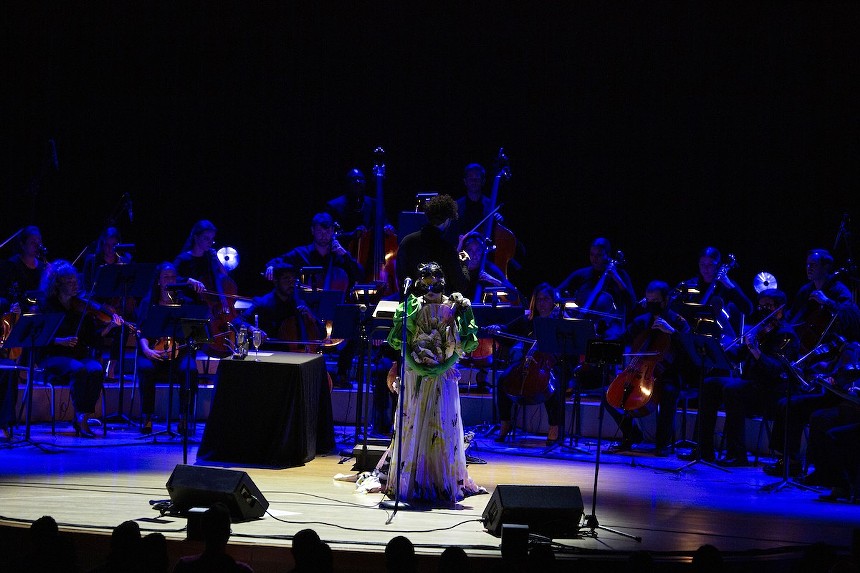 Björk at the Adrienne Arsht Center for the Performing Arts
Photo by Santiago Felipe
"Jóga" and "Bachelorette" also work well as string arrangements, the latter in particular sounding just as grandiose as the original.

At the end of "Bachelorette," Björk finally told the crowd, "Thanks for tonight," before quickly shuffling off stage. According to the program, that would be it, but the crowd continued to cheer until the singer returned to perform "Notget." When she sings the lines, "I will not forget/This notget," it sounds like a threat, and the live interpretation was just as foreboding as the version on Vulnicura.

Before launching into the night's final song, Björk commented that she has been coming to Miami ever since it was a "tiny city," and noted that every time she comes back, it's completely different.

Eventually, she introduced "Pluto," off Homegenic, acknowledging that it's technically tricky to perform live. The original is primal and chaotic, and for the live interpretation, the orchestra rose to the challenge.

Björk at the Adrienne Arsht Center for the Performing Arts
Photo by Santiago Felipe
Orkestral was the show Björk fans in Miami have always longed for. It delivered memorable reinterpretations of songs we all know by heart while also putting the singer front and center in a way that felt intimate yet imposing.

Oh, and to the guy who kept on yelling, "I fucking love you!" — she heard you the first five times.

Encore:
- "Notget"
- "Pluto"
KEEP NEW TIMES BROWARD-PALM BEACH FREE... Since we started New Times Broward-Palm Beach, it has been defined as the free, independent voice of South Florida, and we'd like to keep it that way. With local media under siege, it's more important than ever for us to rally support behind funding our local journalism. You can help by participating in our "I Support" program, allowing us to keep offering readers access to our incisive coverage of local news, food and culture with no paywalls.
Make a one-time donation today for as little as $1.