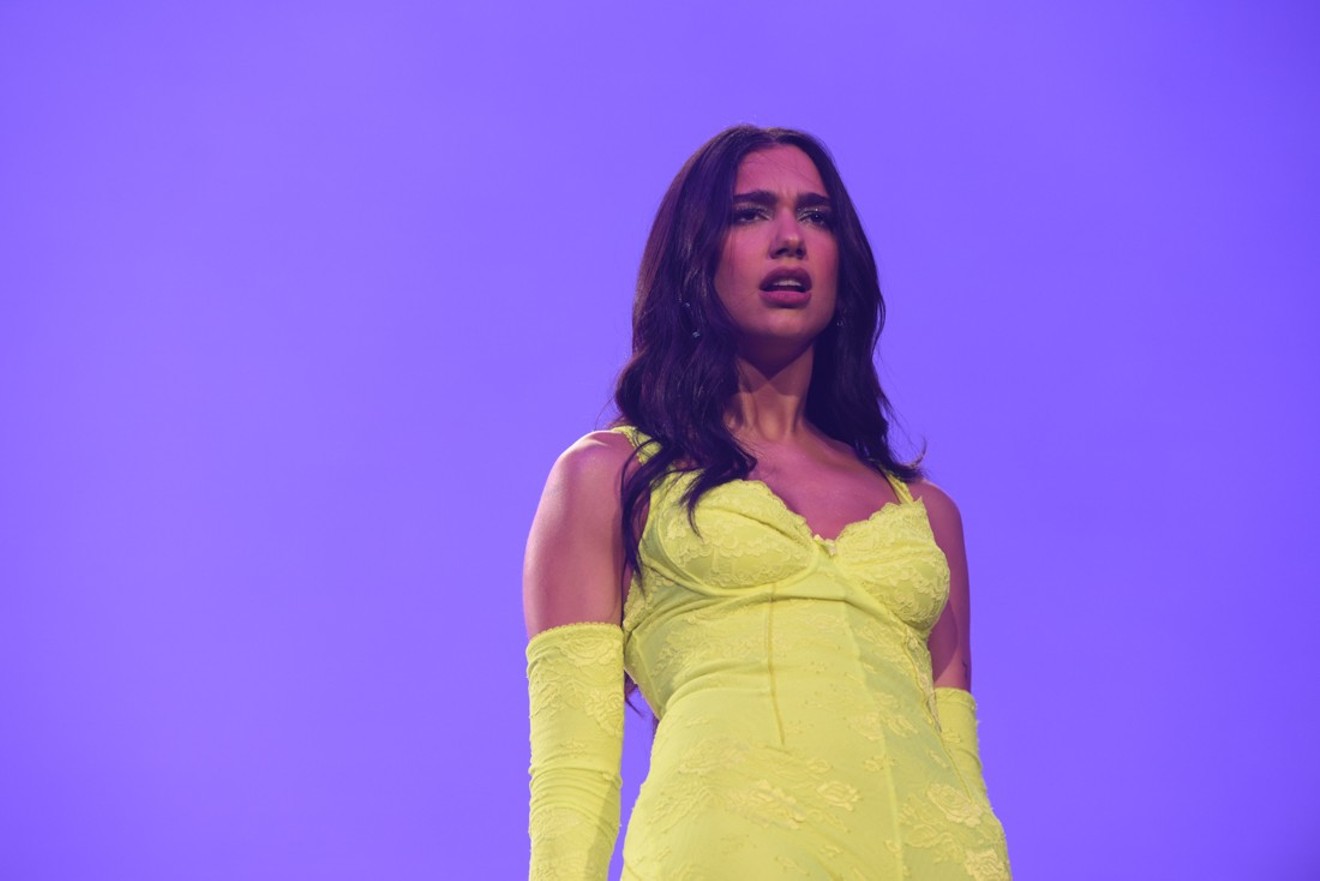 Dua Lipa's long-awaited Future Nostalgia Tour kicked off at the FTX Arena. See more photos from Dua Lipa at the FTX Arena here. Photo by Michele Eve Sandberg
Neon, lots of neon. Platform boots. Head-to-toe bodysuits. Sparkle in all forms — rhinestone, sequins, glitter — and on all parts of the body. The outfits alone on the gaggle of mostly Gen Z crowd gathering inside the FTX Arena on Wednesday night suggested the opening night of Dua Lipa's Future Nostalgia Tour was about fun and flamboyance. And it certainly was.

From her impressive dancing to droolworthy ensembles and stage effects emblematic of her club-meets-pop music, the British singer put on a performance that was just plain fun after two years of cancellations and delays.

After watching fans clamor to get their picture taken next to the electronic Future Nostalgia sign on the lobby wall before it switched to a Bacardí ad and ordering a $10 footlong hotdog on an iPad — two very 21st-century concertgoer problems — I made my way to my seat. While most people wore masks while walking around the concessions area, most also took them off immediately after their butt met their seat. (And said butts weren't long for said seats, but more on that later.)

See more photos from Dua Lipa at the FTX Arena here.
Photo by Michele Eve Sandberg
Openers Lolo Zouaï and Caroline Polacheck performed for about an hour and a half, and at about 9:15, "Body Funk" teased the crowd over the speakers as the stage crew set up. It, along with a colorful video introducing Lipa's dancers in true '80s jazzercise workout video fashion, proved to be a foreshadowing of her opening song, "Physical."

Lipa made her entrance in a neon yellow head-to-toe bodysuit and rhinestones on her eyelids — the decked-out fans were spot on. Overall, her vocals sounded just like her studio recordings — a compliment to any artist. But that wasn't surprising. The most impressive part was how she commanded the stage physically.

In 2018, a video of Dua Lipa dancing, well, not very well, during a performance of "One Kiss" went viral. I haven't been following the singer's career particularly closely in the few years since she's gained pop stardom and had never seen her live, so I'll admit that image of lifeless hip rotations and all the memes, GIFs, and tweets that followed were on my mind.

But by the second song, "New Rules," phrases like "yassss!" and "slayyyy!" were slipping from my mouth nearly subconsciously as she not only kept up with her background dancers but led them.

See more photos from Dua Lipa at the FTX Arena here.
Photo by Michele Eve Sandberg
As the setlist went on, from "Love Again" to "Cool" and "Pretty Please," it was impressive just how dancy the performance really was, from a crowd surf-style lift to full-out dance breaks and some grinding with the mike stand. Lipa must have done some serious cardio training to prep for this tour. It felt like an intentional response to the internet pile-on she received back in the Before Times.

Lipa toned things down temporarily during "Boys Will Be Boys," going solo on stage with a flowing skirt and a spotlight to make an anthem out of this pointedly slower number about the double standards women face in a patriarchal society.

The staging and visual effects felt intentional, too: futuristic, with laser-light effects and an ethereal-looking floating cube sculpture, yet nostalgic with recurring disco balls and dancers doing insane moves on rollerblades. The video playing on the big screen during "New Rules" was an ode to Miami, with flamingos and retro cars — likely a nod to the fact that the song's music video was shot at the Confidante in Miami Beach in 2017.

Most captivating, though, was the moment when Dua literally levitated over the crowd on a hanging platform likened to a spaceship during "Levitating." Wearing another gorgeous bodysuit, this time black and glittering, she glided over the audience surrounded by hanging iridescent planets and stars and the image of a galaxy on the screen behind her. The crowd went wild. 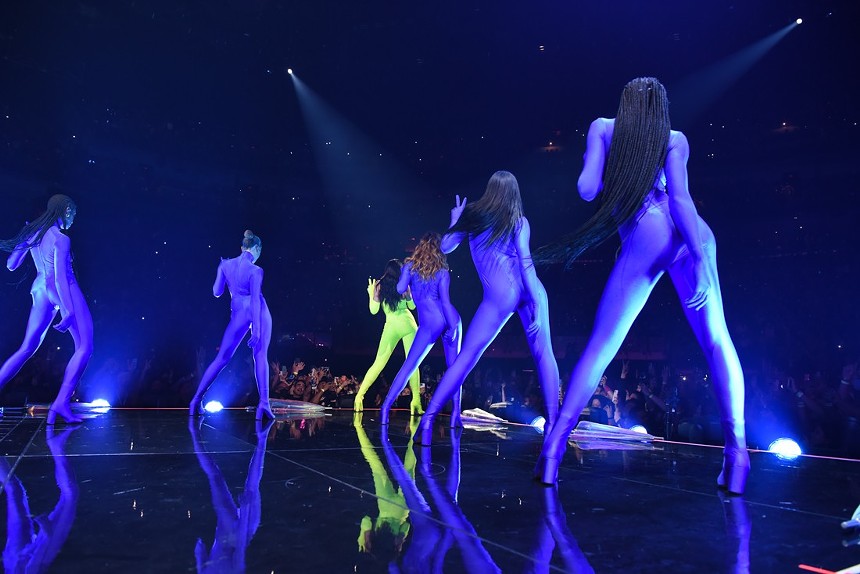 See more photos from Dua Lipa at the FTX Arena here.
Photo by Michele Eve Sandberg
Was I secretly hoping Lipa would add "Un Dia/One Day" to the setlist for this Miami opening show and have Bad Bunny make a surprise entrance? Yes. But when that failed to manifest and she closed the evening with "Don't Start Now" and a ton of confetti, I wasn't a bit disappointed.

I hadn't been to a major indoor concert since the pandemic began, and I'm glad this one was my comeback. I'm sure the same was true for many of my fellow concertgoers, judging from the fact that I never saw anyone sit down at any point in the show. Future attendees of the Future Nostalgia Tour are in for a treat.

Encore
- "Future Nostalgia"
- "Don't Start Now"
KEEP NEW TIMES BROWARD-PALM BEACH FREE... Since we started New Times Broward-Palm Beach, it has been defined as the free, independent voice of South Florida, and we'd like to keep it that way. With local media under siege, it's more important than ever for us to rally support behind funding our local journalism. You can help by participating in our "I Support" program, allowing us to keep offering readers access to our incisive coverage of local news, food and culture with no paywalls.
Make a one-time donation today for as little as $1.