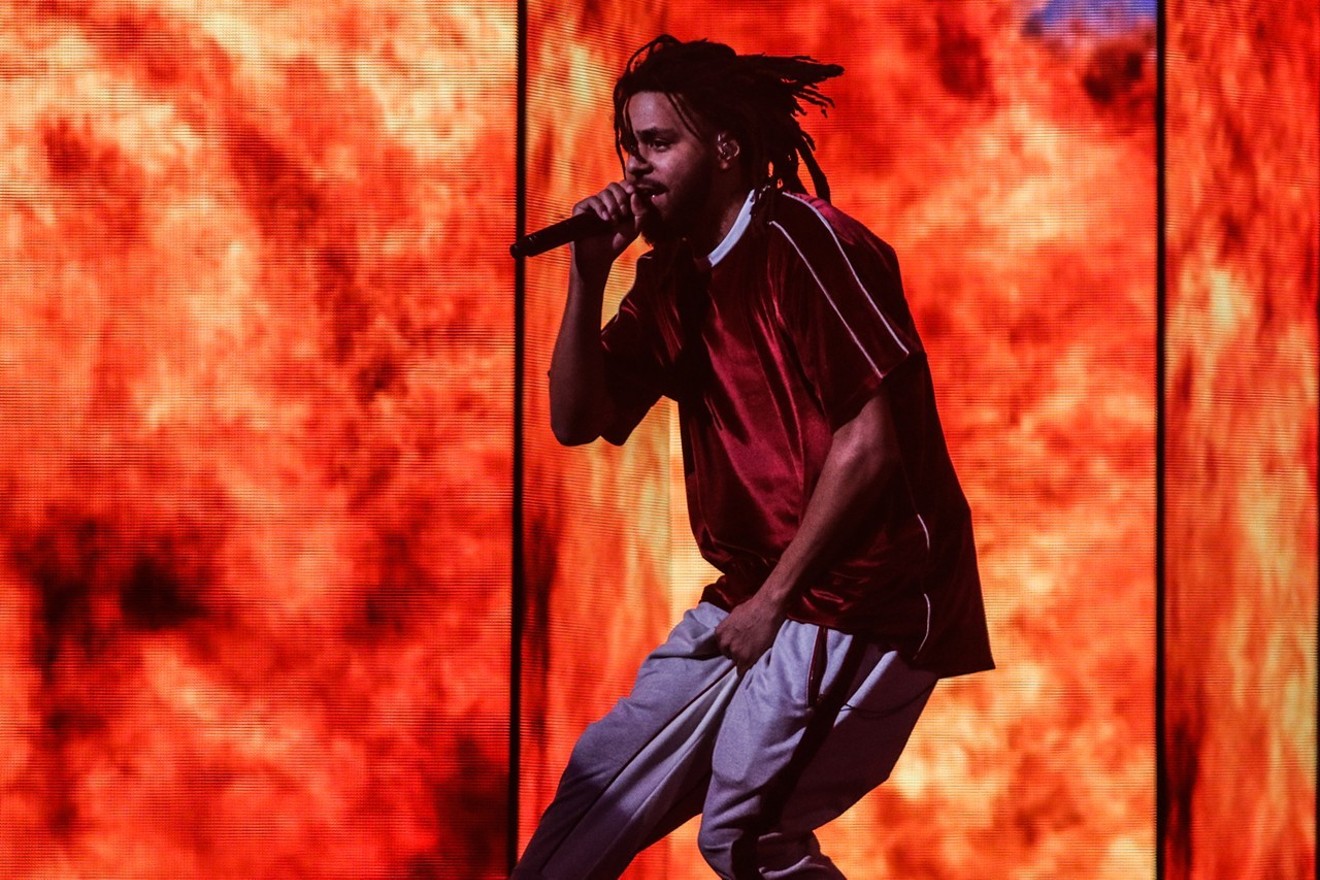 View more photos from J. Cole's tour kickoff in Miami here. Photo by Sean McCloskey / SFLMusic.com
This country does not do earnestness well. We would rather turn you into a meme than lend you an understanding ear. We have trouble digesting sincerity unless it’s wrapped in something less vulnerable. Perhaps that’s part of the reason some folks have so much trouble with J. Cole. His lyrical game plan is less matador, more bull.

Of course, not everyone feels that way. When his most recent album, KOD, dropped a few months ago on 4/20, it broke both Spotify and Apple Music records for most streams in a single day, knocking out previous record-holder Taylor Swift. Taylor Swift. Can you believe that? Taylor Swift?

Cole’s fans sure could. And a good chunk of them were in attendance last night as he kicked off his KOD tour in Miami at American Airlines Arena.

As is his way, J. Cole took the stage with no bells and whistles. It was just him up there. Cole also took on much of the production work for his last three albums. The KOD tour stage is reflective of that lone-wolf mindset. His band was hidden in the back corner of the stage as he hopped along to opening song “Window Pain,” the penultimate track on the new album he was there to celebrate.

A line in the chorus goes: “All I ever wanted was to hear them bitches holler back/Get some money plus respect and now, look, I got all of that.”

Like much of Cole’s lyrical content, it sounds great until you prod it a bit. Does he have all of that? The hollering bitches and money — perhaps. But the jury is still very much out on the whole respect thing.

Cole has always struggled with that in the public sphere. The Rap Yearbook author Shea Serrano once wrote a 2,000-word article about going to a J. Cole concert in search of anyone who could explain why J. Cole didn’t suck (no one really succeeded). Complex called KOD a “PSA without a clear audience,” and Pitchfork gave it a 6.3. review. Respect has not always been accorded Cole in the hip-hop world.

It’d be nice if we could disregard all that noise as intellectual nitpicking. The media seem to do that a lot, huh? But when Cole puts himself front and center onstage with no distractions and begs you to listen to what he’s saying, not how he’s saying it, well, he invites critique. And that’s exactly what he has done on his KOD tour. It’s just him up there, remember? For an hour and a half: a man, a microphone. You have no choice but to listen, and that’s just how he likes it. 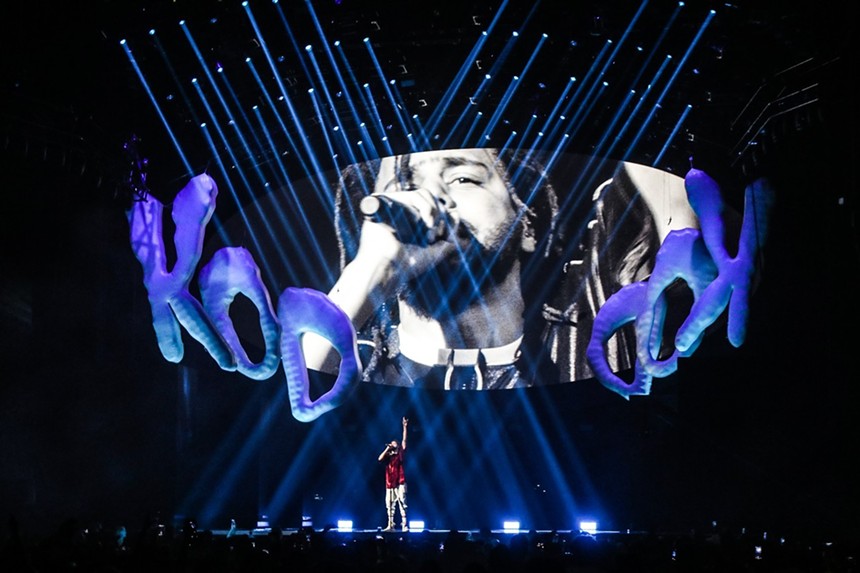 View more photos from J. Cole's tour kickoff in Miami here.
Photo by Sean McCloskey / SFLMusic.com
J. Cole so often attempts to drop a sledgehammer without realizing he’s working with a rubber mallet. The result can feel like sitting in on Philosophy 101, except the class size is somewhere around 400 million and everyone seems inexplicably glued to the one kid in class who didn’t study. Cole shows flashes of brilliance — no doubt about it — but is dragged down time and time again by heavy-handed melodrama. This is true both in his lyrics (like when he professes the obvious on the anti-Instagram song “Photograph,” moaning, “Love today's gone digital/And it's messing with my health") and in his new live show (he rapped the first verse of “Photograph” while staring at his phone).

As a listener, one gets the urge to grab Cole by the lapels and scream, “We get it! What else?”

He’s a chronic oversimplifier. Cole loves to critique the superficial but does so in a skin-deep way.

Despite the valid criticism that has followed his body of work, though, Cole has clearly tapped a vein usually ignored by hip-hop. There are millions of streams, a diehard fanbase, and a very real audience that nearly sold out the AAA last night. He deserves respect for taking the path less traveled. 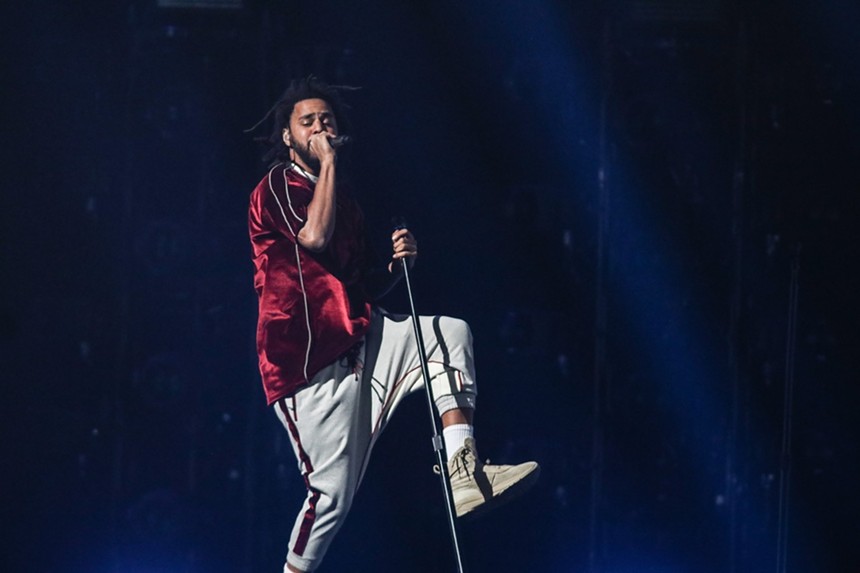 View more photos from J. Cole's tour kickoff in Miami here.
Photo by Sean McCloskey / SFLMusic.com
Cole has a song called “Wet Dreamz” from his smash success 2014 Forest Hills Drive. He performed it at the tour kickoff The song is a bizarre but refreshingly honest story about Cole attempting to sleep with a girl he liked while trying to hide that he is a virgin. In the song, a nervous and anxious young Cole practices putting on a condom, tries to learn technique from watching porn, and tells the listener, “Most of all, I'm prayin', 'God, don't let me bust quick!'" It’s weird and goofy and unguarded. Classic Cole. The song is also a vulnerable depiction of male sexuality that this culture — especially hip-hop — needs so, so badly. Cole even got the Miami crowd to scream along as he gleefully recalled, “Hadn't been in pussy since the day I came out one!”

See, he’s not a bad person or a bad artist and, most of the time, he's trying to deliver a message the world needs to hear. Reaching the end of his concert, he spoke to the crowd about KOD. “What I’m saying on this album is that a lot of us are running from something, right?” he asks. “I hope that we see a day where we stand up and we look all this shit in its face… We all have our coping mechanisms. And I want to see you face yours.”

Believe him. J. Cole means every word. And we want to see that day too. It’s just that he’s not yet great at conveying this through his art — at least not as great as it feels he could be.

So what do we do until he achieves this greatness? Dismiss him? Hate him? Love him?

Maybe none of the above. Would it kill us to just keep listening a little longer and give Cole another thing society seems so unattracted to: time and patience? Maybe that’s what he needs, just a little more time to become the voice and artist he’s working so hard to be.

Shouldn’t we give him that? It seems like the J. Cole thing to do.
KEEP NEW TIMES BROWARD-PALM BEACH FREE... Since we started New Times Broward-Palm Beach, it has been defined as the free, independent voice of South Florida, and we'd like to keep it that way. With local media under siege, it's more important than ever for us to rally support behind funding our local journalism. You can help by participating in our "I Support" program, allowing us to keep offering readers access to our incisive coverage of local news, food and culture with no paywalls.
Make a one-time donation today for as little as $1.

Ryan Pfeffer is Miami New Times’ music editor. After earning a BS in editing, writing, and media from Florida State University, Ryan joined the New Times staff in November 2013 as a web editor, where he coined the phrase "pee-tweet" (to retweet someone while urinating). Born and raised in Fort Lauderdale, he’s now neck-deep in bass and booty in the 305.
Contact: Ryan Pfeffer
Follow:
Facebook: Ryan Pfeffer
Twitter: @Ryan_Pfefferoni