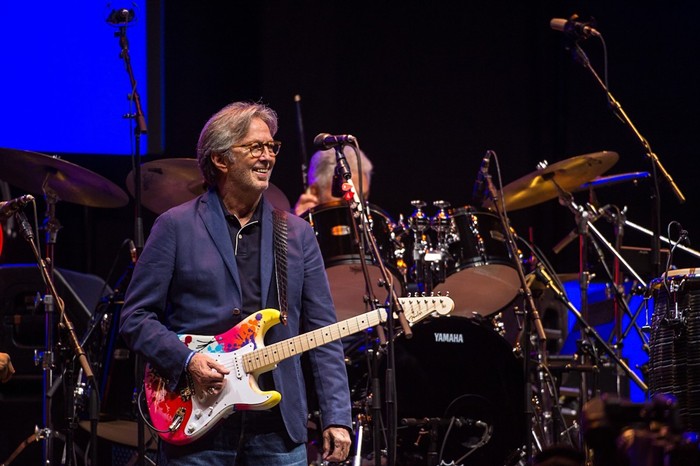 Those were the first words Van Morrison uttered to Glen Hansard (the Frames, the Swell Season) when the two Irish musicians met. The setting was an intimate gathering hosted by a member of the Guinness beer clan in honor of Sir Van's 50th birthday in 1995. Hansard was an unknown at the time, busking for dollars. But he'd befriended the hostess, who encouraged him to attend the soirée.

At the party, Morrison decided to play some songs and asked for requests. Hansard suggested that Morrison — one of his idols — play "Hungry for Your Love," off Morrison's 1978 release, Wavelength. That's when Morrison delivered the aforementioned grumpypants reply, handed Hansard his guitar, and stormed out of the room.

But that's not where the story is. Morrison eventually re-entered the room and sat down with his back to Hansard, who was entertaining the attendees. Eventually, Morrison turned around and asked Hansard to play "Hungry for Your Love." Hansard obliged and Sir Van began grooving along. He then asked Hansard to duet on Bob Dylan's "It's All Over Now, Baby Blue" (which Morrison himself had covered with his first band, Them) before ushering Hansard — along with a guitar and a bottle of port — into a guest house on the Guinness property, where they swapped songs until the sun rose.


They spoke nary a word during the hours they spent alone in that house. But finally, as Morrison departed, he said to Hansard, "Nice voice, nice songs, blah blah blah." Retelling the story to the actor Kevin Pollak, Hansard recalled that the interaction left him "not only a bigger fan" of Morrison's, but "a changed musician."

Shifting the anecdote to a more objective realm, there's one inescapable truth to be drawn when you hear Hansard tell the story: Van Morrison is proof of the adage that you're better off not meeting your idols, because they'll inevitably let you down. Hansard was so starstruck that he couldn't properly gauge Morrison's assholery, which speaks to the degree to which the Irish icon's brilliance obscures his rougher edges. Van the Man is a bitter little prick, but he's a bitter little prick whose songs have touched so many lives that he's larger than life, unbound by its plebeian rules and reality.

The onset of the COVID-19 pandemic forced everyone to confront an uncomfortable truth: that there was a rapidly spreading disease that could kill any of us if we so much as conversed in close proximity, and that the world's foremost medical experts didn't have a clue how to cure it. Around the world, from Belfast to Baltimore, life stopped. It was the day the music died, for street-corner buskers and multiplatinum megastars alike.

Most lauded rockers in their seventies sensibly opted to cancel tours and sequester themselves in their countryside manors for the duration. Not Morrison. Instead, the crusty 75-year-old cut a series of slapdash, hackneyed anti-lockdown tunes, ostensibly to raise money for out-of-work music-industry workers in the U.K. and Ireland. What he actually accomplished, however, was to recklessly downplay the gravity of the pandemic, tarnishing his image in the process.

Protesting Morrison's presence on the bill of an upcoming set at the Glastonbury music festival, a columnist at the Independent recently wrote, "Van Morrison has become a stain on music, an anti-social menace and someone who probably shouldn’t have access to a platform for a while. As a fan of the festival, I’m worried that Glastonbury’s reputation could be damaged by working with such a toxic human right now."

Eric Clapton doesn't seem fazed by the prospect. Ol' Slowhand swooped in this past December to join Van on the very worst of his anti-lockdown tunes, "Stand and Deliver." Melodically unappealing and lyrically cringe-worthy, "Stand and Deliver" is, by a good distance, the worst song Morrison has ever written.

Setting aside the far more credible argument that those "chains" — i.e., COVID restrictions — are likely responsible for helping the likes of Morrison and Clapton avoid the proverbial dirt nap, it's hardly a good look for Clapton — a man who dubiously urged a live audience to "keep Britain white" back in the '70s despite having built a career on the appropriation of Black blues music — to be a party to a tune that clumsily compares having to chill out and get sloshed at home while watching Welcome Back, Kotter reruns for a few months to slavery.

Judging from a recent interview he gave to Oracle Films, Clapton has ventured further down the conspiratorial rabbit hole since his December collaboration with Sir Van. He laments that he's been shunned by several of his famous friends for his COVID beliefs, which range from his concern that getting vaccinated will render his daughters sterile to his dismissal of pro-vaccination recommendations as "propaganda." (The 76-year-old Clapton also claims he suffered severe side effects after getting vaccinated at his kids' behest.) Worse yet, he took the opportunity to chastise celebrities of color for "guilt-tripping their own communities" into getting vaccinated. Had he managed to keep Britain white, he wouldn't have to fight this fight, right?

One hopes that by the time Clapton takes the stage at the Hard Rock Hotel & Casino in Hollywood on September 26, the pandemic will be a distant memory to South Floridians, a prospect that will almost assuredly be the case by the time Morrison visits the same venue on February 12 of next year.

You might know their music, but you don't know them — and you don't want to. Nice voice, nice songs, blah blah blah.

Van Morrison. 8 p.m. Saturday, February 12, 2022, at Hard Rock Live at the Seminole Hard Rock Hotel & Casino in Hollywood, 1 Seminole Way, Hollywood; 954-797-5531; seminolehardrockhollywood.com. Tickets $55 to $235 via ticketmaster.com.
KEEP NEW TIMES BROWARD-PALM BEACH FREE... Since we started New Times Broward-Palm Beach, it has been defined as the free, independent voice of South Florida, and we'd like to keep it that way. With local media under siege, it's more important than ever for us to rally support behind funding our local journalism. You can help by participating in our "I Support" program, allowing us to keep offering readers access to our incisive coverage of local news, food and culture with no paywalls.
Make a one-time donation today for as little as $1.