Joe Satriani will join an all-star lineup to pay tribute to Jimi Hendrix. Photo by Joseph Cultice
Remember the band Squares from the '80s? No? Well, don’t feel too bad — neither does anyone else. The group never released an album.

“We were the hardest-working, least successful band of the early '80s,” says Squares guitarist and vocalist Joe Satriani, laughing.

A 15-time Grammy nominee, Satriani has since made a name for himself as one of the most bad-ass rock guitarists in the business. His newest box set, Beyond the Supernova, was released this past January 23, and he's returning for the first time in nine years to play the Experience Hendrix 2019 Tour.

Satriani will join an all-star lineup that includes Dave Mustaine of Metallica and Megadeath, Eric Johnson, Dweezil Zappa, and original Jimi Hendrix’s Band of Gypsys bass player Billy Cox on March 3 at the Pompano Beach Amphitheater for a three-hour tribute to the late Jimi Hendrix.


“These shows are so amazing,” Satriani says. “[The music] is reinterpreted in so many vivid colors because of the variety of performers.”

As an early architect of hard-rock instrumental music, Satriani, now 62, taught greats such as Steve Vai and Yngwie Malmsteen and has influenced countless others through his guitar clinics the G4 Experience.

“A typical day with Sammy is always the most crazy, random stuff,” he says of his good friend Hagar, for whom Satriani recently played material from the forthcoming Squares album, tentatively titled Squares: The Best of the Early 80s Demos.

“It was great to sit someone like Sammy down and surprise him, 'cause he’s been around the block a few times,” Satriani says. “He was definitely shocked and surprised. He was smiling and thought the record sounded great, so I was very happy about that.”

The words “prolific,” “perfect,” and “genius” have been used by peers such as Hagar and Vai when describing Satriani. But the idea of being so admired is tough for him to wrap his head around.

“The presumption from the outside is so different than what it feels like internally,” Satriani says. “In reality, I search for magic and inspiration just like any other artist... If I get up in the morning and I pick up a guitar, the first ten minutes I have to convince myself that I am actually a guitar player.” 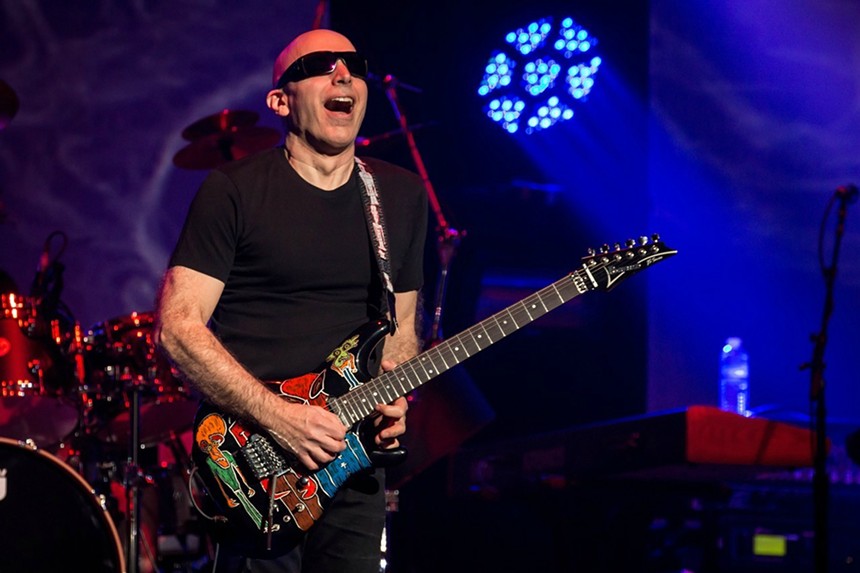 Photo by Jon Luini
Satriani is definitely a guitar player. In fact, when Mick Jagger was looking for a guitarist for his first solo tour in 1988, he tapped Satriani.

“It’s really hard to put into words how dedicated he is to every person in the audience every second of the show,” Satriani says of Jagger. “A lot of people, after they get a little success, they sort of take the foot off the gas pedal a little bit and kind of coast. There was just never any coasting. Never.”

Satriani recalls one performance in New Zealand when he was standing right next to Jagger. “Somebody threw an empty bottle of liquor from somewhere in the audience and hit him right in the head,” he says of the singer getting clocked hard. “We saw it coming, but it was too late to do anything about it. He spun around a 360 and just kept singing. He didn’t flinch.”

The band watched in awe as Jagger continued playing, and they were not surprised to learn later that Jagger had sustained a concussion. “He didn’t let that stop him, and he didn’t lose his cool,” Satriani says. “That’s just an example of the great measure of his professionalism.”

Satriani credits much of his professional ethics to lessons he learned from working with Jagger. But he says that although he is disciplined and hard-working, he is no perfectionist.

“If you listen to all my albums, you’ll hear things that are, like, late or early or that could have been played more in tune or could have been mixed better,” he says. “I’m always surprised when people think I’m a perfectionist, because I am anything but.”

Scrappy, off-the-hook performances are what add character and life to his music, Satriani says.

“One thing you learn when you’re making records is that perfect isn’t inspiring — it’s just perfect. The average person is not interested at all in perfection. They just want inspiration.”

Satriani says two of the most common questions he's asked are where he gets his inspiration and how he would advise others to tap into theirs.

“There is no piece of equipment for it; there’s no physical technique,” he says. “It’s something that you just pull out of nowhere. You know it when you hear it, but it’s not as tangible as picking up the right guitar or performing something just as it's written on the page.”

Though Satriani’s intricate fretwork and magical compositions might appear effortless, he says he has to work hard just like everyone else.

The Experience Hendrix show promises imperfectly perfect classic hits and deep cuts made famous by the late Jimi Hendrix, whom Satriani credits as his first inspiration.

“You know you can’t play as good as Jimi, and everyone in the audience knows that, and they let you off the hook,” he says. “They’re just there to celebrate his music with you.”

Experience Hendrix 2019 Tour. 7:30 p.m. Sunday, March 3, at Pompano Beach Amphitheater, 1806 NE Sixth St., Pompano Beach. Tickets cost $39.50 to $85 via theamppompano.org.
KEEP NEW TIMES BROWARD-PALM BEACH FREE... Since we started New Times Broward-Palm Beach, it has been defined as the free, independent voice of South Florida, and we'd like to keep it that way. With local media under siege, it's more important than ever for us to rally support behind funding our local journalism. You can help by participating in our "I Support" program, allowing us to keep offering readers access to our incisive coverage of local news, food and culture with no paywalls.
Make a one-time donation today for as little as $1.