The Best Five Concerts in South Florida This Week 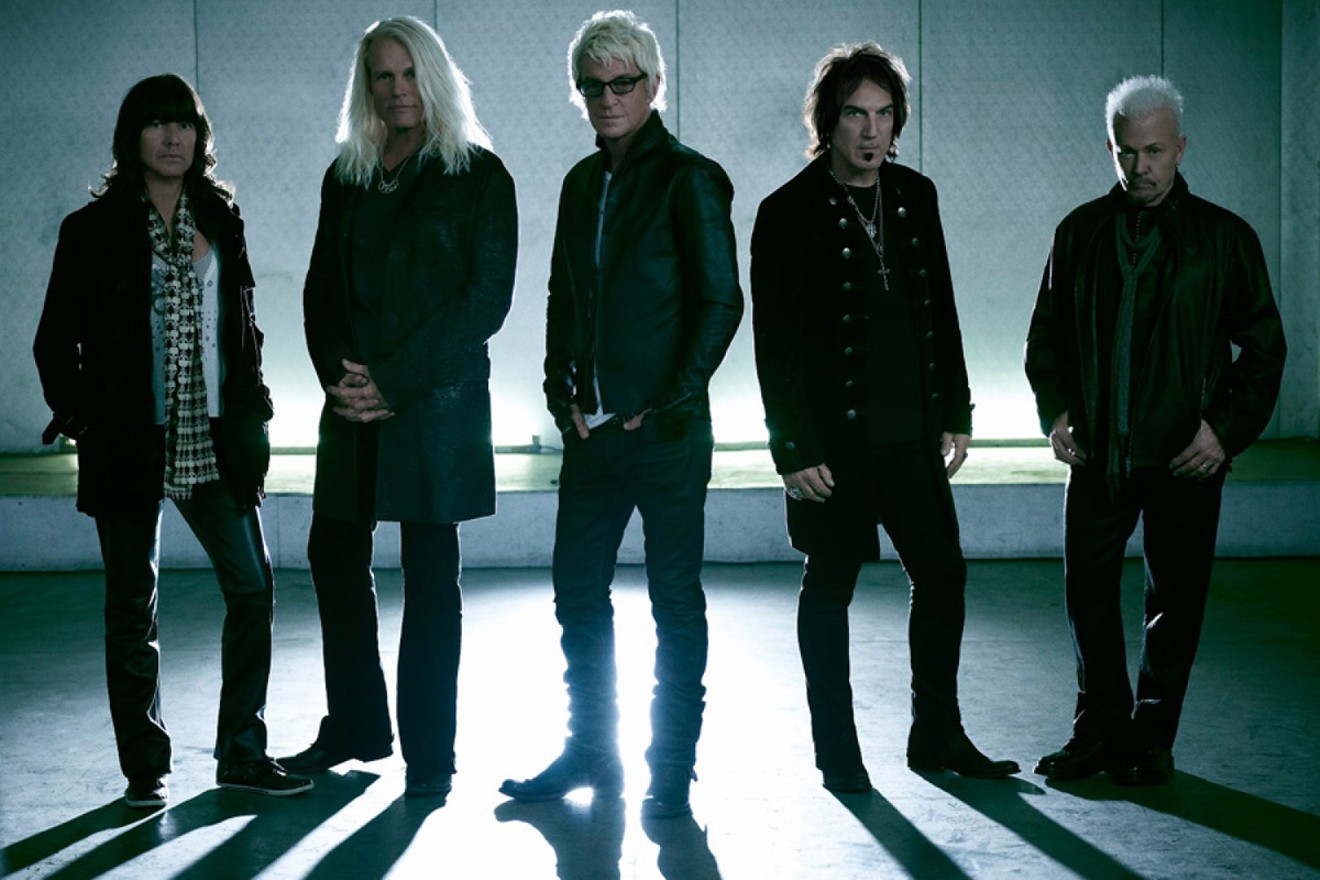 REO Speedwagon plays Friday night at the Pavilion at Seminole Casino in Coconut Creek. Photo courtesy of REO Speedwagon/Scoop Marketing
Who hasn’t swooned while listening to “Can’t Fight This Feeling” by REO Speedwagon? Right now the chorus is playing in your head and you remember that time in the shower when you got shampoo in your eyes while you were singing, “Baby, I can’t fight this feeling anymore.”

REO’s Hi Infidelity from 1980 was without a doubt the band’s most influential album, going platinum 10 times and reaching No. 1 on Billboard's U.S. album chart. With hits like “Keep On Loving You,” one of the record's two No. 1 singles, we get that outstanding harmony the band is known so well for. Then when they hit you with those blistering guitar solos that mark the style of the ‘70s, you can feel your feathered bangs blowing in the winds of their amplification.


With all the shine and polish of their vocal harmonizing, REO also has a subtle undertone twang that you hear on songs like “Take It On the Run.” A-long-drive-on-the-highway-to-a-new-life song that helps give you that feeling of being able to move on. Then they smack you in the face with the shredding of the guitar — and that baby screams right when REO really wants to hit the listener in the heart. The song "Tough Guys" is the anthem for all the dorks in the world that have trouble getting laid — and I’m here for it. It’s a testament to REO’s songwriting creativity, mostly the work of frontman Kevin Cronin and late lead guitarist Gary Richrath. (Richrath died in 2015 from complications from stomach surgery.) People like to talk about their bitchin’ guitar solos and their amazing vocals, but songs like "Tough Guys" really drives home their eclectic thinking. 8 p.m. Friday, March 6 at the Pavilion at Seminole Casino Coconut Creek, 550 NW 40th St., Coconut Creek; 954-977-6700; seminolecoconutcreekcasino.com. Tickets range from $60 to $90 via ticketmaster.com.

At times hip-hop artists down in South Florida can let me down, but I’m digging this Broot McCoy shit. The Bearded White Rapper Movement has made its way to Florida, and while NYC has Action Bronson and there's Jonwayne in L.A., SoFla has Broot McCoy. He’s one of those bars rappers, those I-sharpen-my-sword-on-the-brains-of-lesser-humans rappers, those give-me-that-soul-sample-and-let-me-go-rappers — and those are the type that keep the truth alive. His 2018 album Blue Gorilla Tactics with 90culture is a fantastic modern-day boom-bap slapper that isn’t found too often from South Florida artists. The piano keys on "Coercion" are simply beautiful and go perfect with Broot’s brand of swag. With a slew of bar-barians on the album, there is no stopping the bangers on Blue Gorilla Tactics. With Y.K. Hamilton. 11:30 p.m. Thursday, March 5 at Respectable Street, 518 Clematis St., West Palm Beach; 561-832-9999; sub-culture.org/respectable-street. Free show.

I want to rob a bank, jump into the driver seat of a '70s Lincoln chop top, and do 85 all the way out of town when I hear Dark Water Rebellion's song "Care" off their 2017 album Dark Water Rebellion. I feel fucking dangerous, even with a guy in the mix playing a banjo. Bass-heavy rock does that to me, and on their latest album, Macabre, that dropped in 2019, they bring plenty more of that heavy shit to shake lose your soul. There’s an outlaw element running through the album as well, with tracks like "16 Guns," a nasty sonofabitch of a song that’s Mad Max over banjos with a desert shootout at noon.

Something I really appreciate about Dark Water is a track like "Bela Lugosi’s Dead," where they show off how much more they are than just rock band with twangy strings. They give you that thematic element that drops you into a story, paints the walls of your mind with the strange ad libs and noises that permeate in the background, falling in and out of the darkness. We get this feeling again on "Le Beast." The chorus is a chaotic chant that pumps the listener with the energy necessary to make it through a set by Dark Water Rebellion. The band says they make Southern Gothic Swamp Rock, and I think that's spot-on. There is definitely a level of horror that can be found in Dark Water's style. The rock gods might actually be terrified of these guys. With Jessi Rose and Fabian. 8:30 p.m. Friday, March 6 at Twisted Roots Kava Brewery, 2037 Hollywood Blvd., Hollywood; facebook.com/twistedrootskava. Free show.

In case you are eager to put on your cowboy boots and stomp your way through the weekend, well, the gods are offering that option too — along with some fine barbeque. Carly Pearce, Kentucky-born singer/country artist, is bringing her brand of heartfelt sultry country to South Florida for the Rib Round Up Music Fest. This past Valentine’s Day, Pearce dropped her second studio album, Carly Pearce, where she blends country and pop on the single “I Hope You’re Happy Now” with Lee Brice that I’m sure will have all the blondes in camo short shorts and muddy boots screaming this weekend. “Finish Your Sentences” is a throwback of sorts to country-duo cuts that Johnny Cash and his wife, June Carter, made famous, a duet style laced over pop production — and it works. Rib Round Up Music Festival, with Dustin Lynch, Chris Janson, Michael Ray, and Matt Stell. Noon, Saturday, March 7 at Coral Sky Amphitheatre, 601-7 Sansburys Way, West Palm Beach; westpalmbeachamphitheatre.com. Tickets start at $44 via westpalmbeach.com.

Everyone wants to feel sexy. Everyone wants to feel loved. Everyone wants to sweat that cool vibe. But not everyone can be Kayland. Her neo-soul grooves have me thinking about the ways I’ve bungled things in relationships and focusing on not making those mistakes in the future. Her single “Make Me Feel” is not only smooth as fuck, but the horns give it a touch of jazz that matches her vocal style. She’s a bright star in what’s currently a galaxy of talent when it comes to female pop vocalists. I’m going to be covering her event at C&I Studios this weekend and I better wear my purple silk button down from ‘96 to make sure I’m smooth enough for the show. Kayland’s 2017 EP Purple Hues is a beautiful project that feels almost like a reflection of decades of R&B. On Saturday she will also premiere her latest music video for her new single, “Coolin.” 7 p.m., Saturday, March 7 at C&I Studios, 541 NW First Ave., Fort Lauderdale; c-istudios.com. Free show.
KEEP NEW TIMES BROWARD-PALM BEACH FREE... Since we started New Times Broward-Palm Beach, it has been defined as the free, independent voice of South Florida, and we'd like to keep it that way. With local media under siege, it's more important than ever for us to rally support behind funding our local journalism. You can help by participating in our "I Support" program, allowing us to keep offering readers access to our incisive coverage of local news, food and culture with no paywalls.
Make a one-time donation today for as little as $1.