Opinions vary on the subject. Some fans in attendance were overwhelmed by the crush of people, while others were as sunny as the weather, proclaiming everything to be perfect. Like the gulf of sand separating the two stages — Tortuga and Sunset — a vast space placed newcomers and veterans on opposing ends of this spectrum.

One reoccurring positive comment was the cleanliness of the fest. This is a well-deserved compliment that’s due to Tortuga’s commitment to solve, rather than contribute to, the problem of beach and water pollution. After all, Rock the Ocean (RTO) is an ocean conservation organization; its partnership with the hard-working people of Clean Vibes ensures RTO's promises aren’t false or a simple PR smokescreen. If only other festivals were as equally focused on the environment’s health and sustainability.

But many fans who attended Tortuga in previous years say the 2017 fest was just a bit too much. The irony is that for the first time, the festival scaled back to just two stages — three if you count the small area near the south entrance that hosted a DJ and a mock pirate ship (which occupied the basketball court that was used for food trucks at this year's edition), but that hardly counts in comparison.

Gone was the stage set aside for alternative and up-and-coming acts that last year saw amazing sets by Elle King, Muddy Magnolias, and Sam Hunt. This year, rotating between the two main setups meant great migrations of people from show to show. Like a drunken herd of stumbling, (mostly) hairless buffalo seeking food in the winter, fans crisscrossed the sand in giant bunches, making it difficult for anyone lost in the rear of the pack to see anything up front. Additional stages once helped to break up the crowd into more manageable groups; now the fest is prone to suffering from claustrophobic clusterfucks.

Maren Morris on the Tortuga Stage.
Photo by James Argyropoulos
That being said, early birds were privy to some truly excellent concerts.

Friday’s standouts include Delta Rae; Jordan Davis, who nailed a rowdy, honky-tonk version of Johnny Cash’s “Folsom Prison Blues”; and Darius Rucker, who, proudly donning a Miami Dolphins cap, played nothing but the hits, including a few Hootie & the Blowfish classics. He even squeezed in a Prince tribute at the end with “Purple Rain."

Brett was back for a three-peat at Tortuga, this time as a solidly established artist whose fans sang his songs long before they were even in view of the stage. He was hardly the only performer to make a triumphant return. Old Dominion, Brooke Eden, Drake White, and Slightly Stoopid all wisely returned to the beach. Kenny Chesney was the weekend’s closer Sunday night, a fitting choice considering he helped establish the festival’s legitimacy in its first year.

Perhaps the most interesting performance was Nelly on the Sunset Stage. He was, by far, the odd duck of this year’s lineup, and damn near the entire festival came out to see him. The have-nots in the rear of the crowd had two-thirds of their view of the stage blocked by a cocktail stand. Thankfully, the giant screens on either side of the stage clued in those not fortunate enough to be in the VIP or Super VIP sections (which required passes that, given the current size of Tortuga, seem totally worth the price of admission). Nelly sounded mostly fine, with the exception of “Country Grammar (Hot Shit),” when everything within earshot — Nelly’s voice, the sound of the waves, the voices in our heads — was drowned out by bass.

Nelly's set drew a colossal crowd.
Photo by James Argyropoulos
Two of the best shows benefited from excellent sound quality and topnotch talent. Following Nelly’s Saturday night, recent CMA winner Maren Morris walked onto the stage to the crunching guitar riffs of “Sugar,” looking every bit like the rock star she’s becoming. She told the crowd: “All my friends played Tortuga last year, and I was pissed,” an injustice she immediately rectified with a powerful set that found her rampaging through her incredible major-label debut, Hero. Fan favorites included “80s Mercedes,” an ode to millennials and their fascination with the era of big hair and Ray-Bans; “I Wish I Was,” a slow jam about “being the asshole at the end of a relationship”; and “Once,” a hymn for the heartbroken and the lovelorn.

If Morris is the new face of , Alan Jackson is the elder statesman, but he’s hardly out of fashion. In fact, Jackson is like a finely aged : The older he grows, the smoother it all goes down. Sunday afternoon, with his Hawaiian shirt, cowboy hat, and Georgia twang, the Country Music Hall of Fame inductee belted out hit after hit, illustrating precisely what’s made him one of the best-selling country artists of all time.

Who you gonna call? Beer-busters!
Photo by James Argyropoulos
Aside from the music, Tortuga is always bursting with other distractions: unparalleled people-watching, college party games arranged by a litany of sponsors, and clever new ways to get drunk. For example, Corona had volunteers roaming the grounds with beer-can-shaped backpacks that dispensed cold brews on the go. The packs made the volunteers looks like Ghostbusters who, instead of taking down angry spirits, tackled sobriety.

Once again, America, or at least American-themed clothing, was a big winner at Tortuga. It’s impossible to calculate whether Tortuga fans love this nation more than anyone else, but they sure as shit spend a healthy amount of money on anything with stars and stripes. 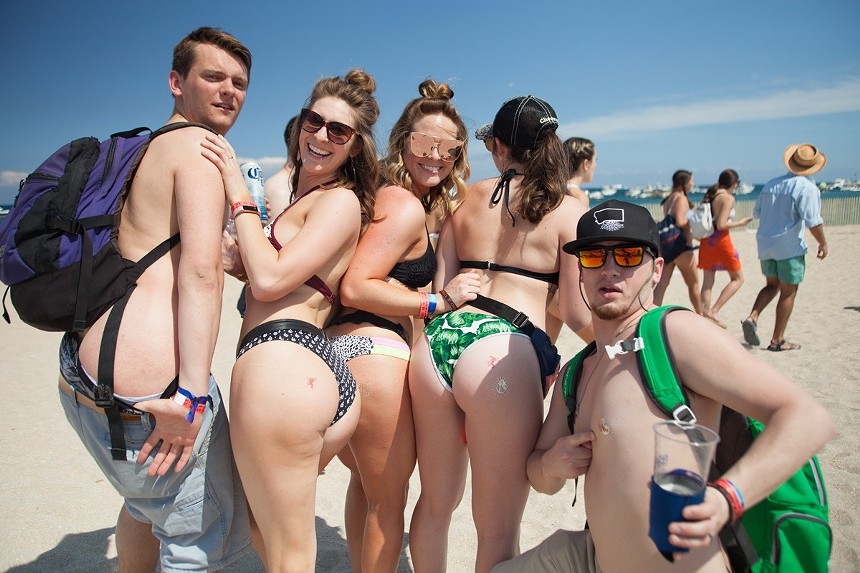 Tortuga fans show off their turtle tattoos.
Photo by James Argyropoulos
Just as in years past, there was no shortage of exposed skin. It presented an excellent marketing opportunity. Many women decorated their assets with temporary turtle tattoos, a branding win for Tortuga.

Speaking of fashion, or lack thereof, although it's a beach festival, Tortuga is urban enough in its proximity to the city that in addition to flip-flops and bare feet, cowboy boots and even high heels were acceptable footwear. This was mostly true for latecomers interested only in the evening’s marquee names.

Tortuga celebrates the simple life: slowly baking in the sun, marinating in beer, and enjoying America’s biggest country music acts. It’s an experience worth digging a trench and comfortably settling into your cozy patch of real estate for a sold three days, armed only with a few towels and a vague sense of where you parked your car.

During his set Saturday afternoon, just after knocking out a pair of Blink-182 covers, Dustin Lynch remarked, “ ain’t scared of loving on one another here; you get weird on the beach. We’re gonna get along just fine.” He was right. There is always a lot of strangeness at Tortuga, but also a lot of love — for the music, for the ocean, and, of course, for one another.

It’s a combination that continues to reel in artists and attendees alike, as well as draw fresh fans. One group of newcomers from Tampa said the lineup was the principal reason for making the drive: “They [Tortuga] killed it.” In addition, Fort Lauderdale Beach is a gorgeous setting that feels like a destination vacation, especially when coupled with a large-scale music festival. Tortuga has its flaws, but for all of the above reasons and more, it's still one of the best music events in the nation.