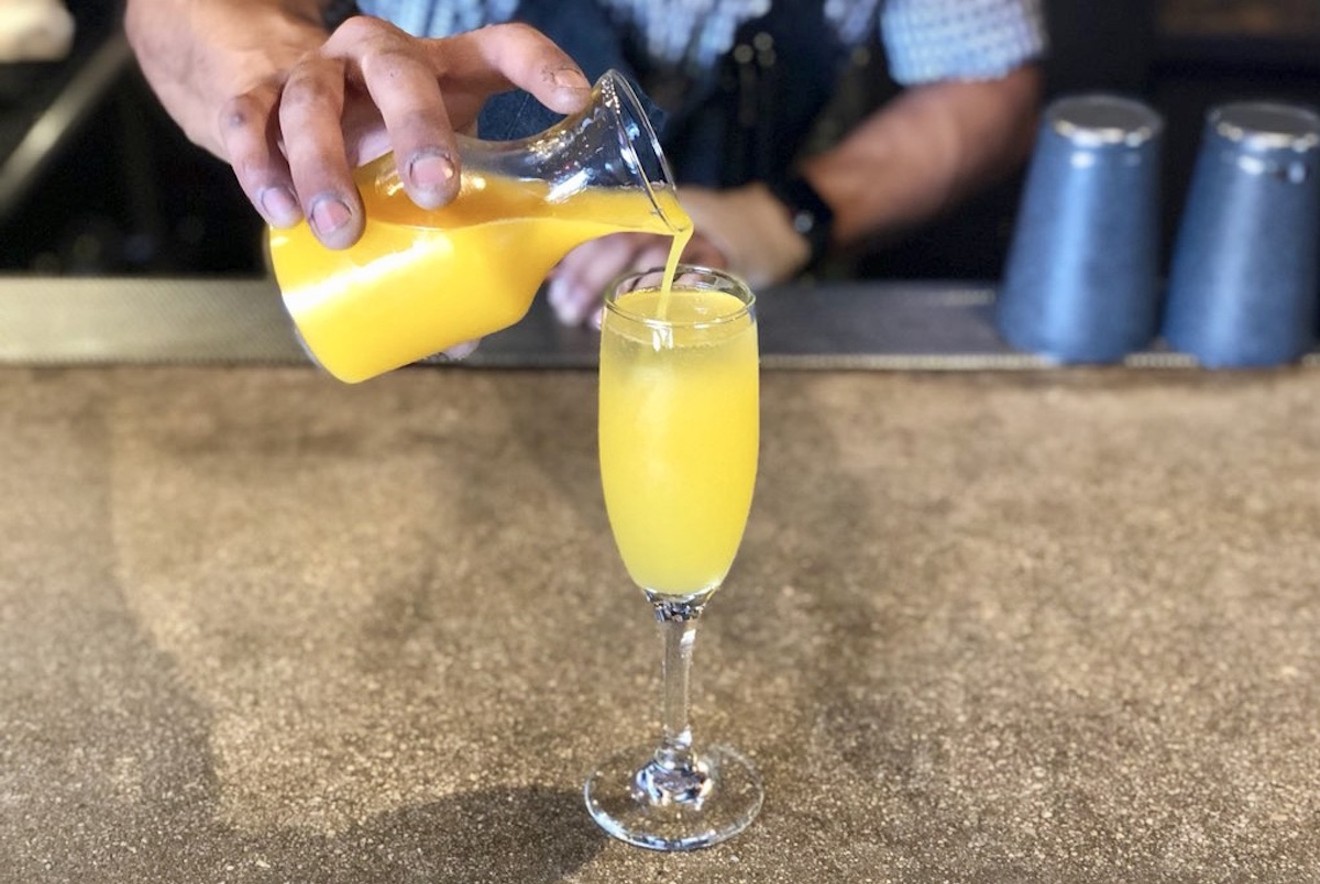 Sunday brunch at Park Tavern remains the best spot to grab the quintessential boozy breakfast-lunch mashup in Delray Beach. Park Tavern
Downtown Delray is to Palm Beach County what Ocean Drive is to South Beach: It's where all the action happens.

Head to the downtown district of this aptly named "Village By The Sea" and you'll understand why this Florida beach town — located midway between Palm Beach and Fort Lauderdale — has become a worthy nightlife destination.

Staying social at all hours is easy in downtown Delray. You can start your evening at a tropical-themed tiki hut by the beach, have dinner at a swanky steakhouse, sip drinks on a rooftop lounge, and dance to a live band until the early morning hours.

Here is your guide to navigating Delray Beach's downtown district: 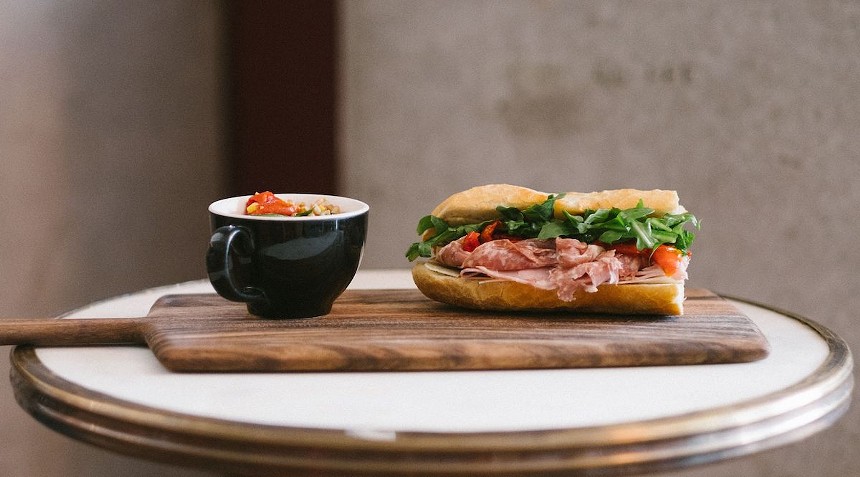 Subculture Coffee
For a quick caffeine boost. Make a stop at Subculture Coffee, the quirky coffee shop at the west end of Atlantic Avenue, before you hit the streets. The house-roasted beans — delivered weekly from the main roastery located in West Palm Beach — are bursting with flavor and ground into potent iced macchiatos or seasonally-inspired lattes ($3.50 to $6). Grab-and-go eats make it the perfect refueling spot during the day or into the early evening with acai bowls, locally-baked goods, and smoothies or fresh-pressed juices ($5 to $11).


For a glimpse of the water. Nothing says "South Florida evening" quite like a drink at a waterfront restaurant. In this case, that restaurant is Deck 84, where a back deck bar presents the ideal panorama complete with Intracoastal views, rum-infused drinks, and chill reggae music. The restaurant also serves weekend brunch, lunch, and dinner with a varied menu that includes house-smoked fish dip ($14), a peaches and brie flatbread ($16), and pistachio crusted snapper ($31). Or hit Sandbar, across the street from the Atlantic Ocean where Atlantic Avenue meets the A1A. A beach-inspired outdoor tiki hut completes the vacation vibe with frozen tropical drinks and Floribbean-influenced pub grub like the Key West conch fritters ($11) or peel-and-eat shrimp ($12 to $16). 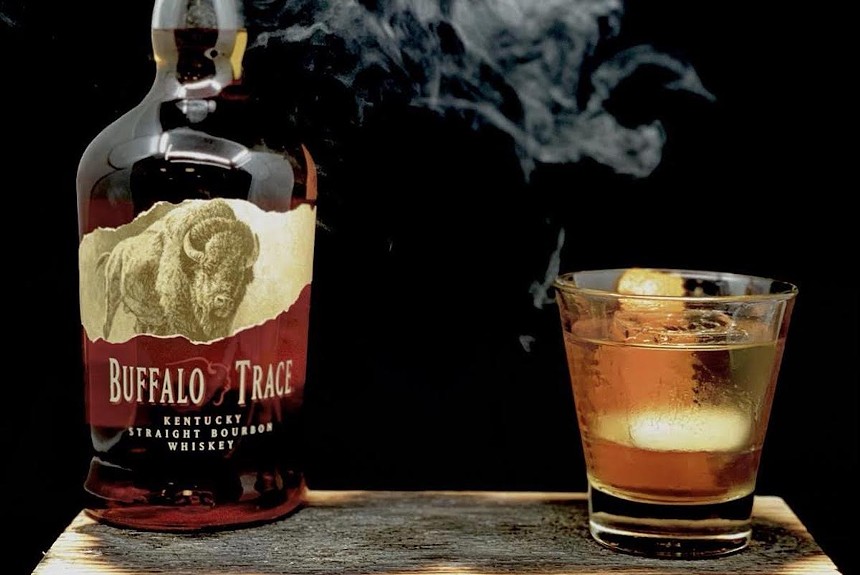 Cut 432
For happy hour. There are plenty of spots on the Avenue that offer happy hour deals worth savoring, but no one puts the "happy" in happy hour quite like Cut 432, Delray Beach's only steakhouse. Dinner can be pricey for selections from the raw bar and high-end cuts of meat, but a daily happy hour offers a sampling of the chef's work for a fraction of the price. Seven days a week, from 5 to 7 p.m., choose from a dozen appetizer-sized dishes priced at $5 apiece; there's everything from truffled mac-and-cheese and the chef's own fish dip to ceviche, oysters Rockefeller, or a tower of giant onion rings. The deals don't stop there, however: You can also pair your plates with $3 wines by the glass, $4 house spirits, or go all out with a Buffalo Trace smoked old-fashioned, grapefruit mule, or blood orange margarita for $5 each.

For a neighborhood-themed cocktail bar. Head just south of Atlantic Avenue into the new SofA neighborhood and you'll find The O.G. Concept creator and co-owner Challo Schott — the man behind Miami bars Better Days and Radio Bar — opened his idea of a Delray neighborhood cocktail bar that blends cultural and style throwbacks. Packaged as a local general store, Bohemian vibes make this a blue collar cocktail bar with a touch of a speakeasy vibe featuring cozy lounge seating areas and an outdoor patio that doubles as a communal garden. Sip on fun, whimsical drinks with names like the O.G. Hillbilly martini (a grapefruit twist on the margarita). If you're feeling nostalgic, the bar serves its frozen sangria in an ICEE cup, adult beverages in Capri Sun-inspired pouches, and its O.G. Bloody Mary in a Campbell tomato soup can ($8 to $12). 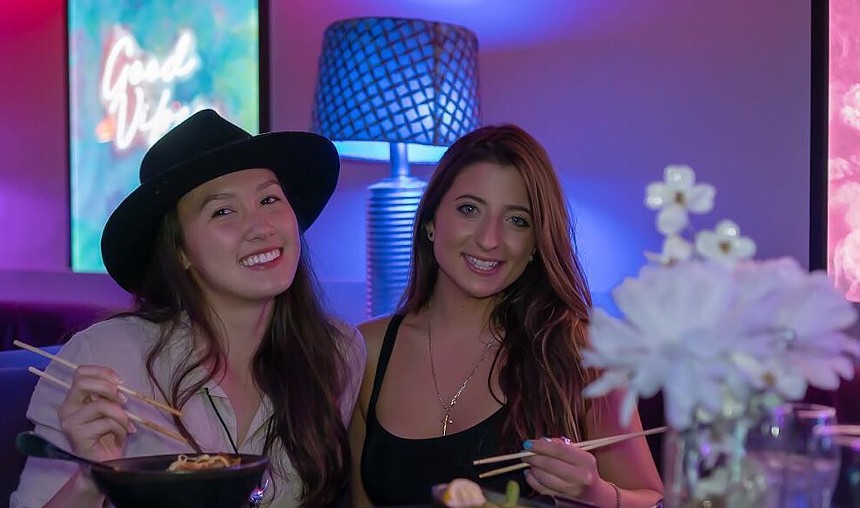 Buddha Sky Bar
For dinner. While Delray Beach has plenty of watering holes, you'll need some food in you before you make the rounds. While there are plenty of great restaurants to choose from in Delray, it's a tourist-laden establishment that shines brightest on Atlantic Avenue. Dubbed Delray Beach's "one-stop shop" for food, drinks, and ambiance, you'll find it all at Buddha Sky Bar & Buddha Garden. Its menu offers everything from prime cuts of meat to fancy sushi rolls ($12 to $36). And later in the evening, a rooftop lounge evolves into Level 2, where a DJ spins the latest hits from 9 p.m. to 2 a.m.

For drinks with the locals. You can go for a traditional dive bar vibe at O'Connor's, an Irish bar where smoke fills the air and shots of Jamo and cheap beer are always the drinks of choice. Or get a blast from the past with the Blue Anchor, an actual English pub that was relocated to downtown Delray Beach and looks the part, traditional cask ale beer pours and all for $4. Or head over to 3rd and 3rd in Pineapple Grove just north of Atlantic. A bar with no sign, it's a regular hangout for Delray Beach's in-the-biz crowd clandestinely located at the corner of — you guessed it — the intersection of Third Avenue and Third Street. 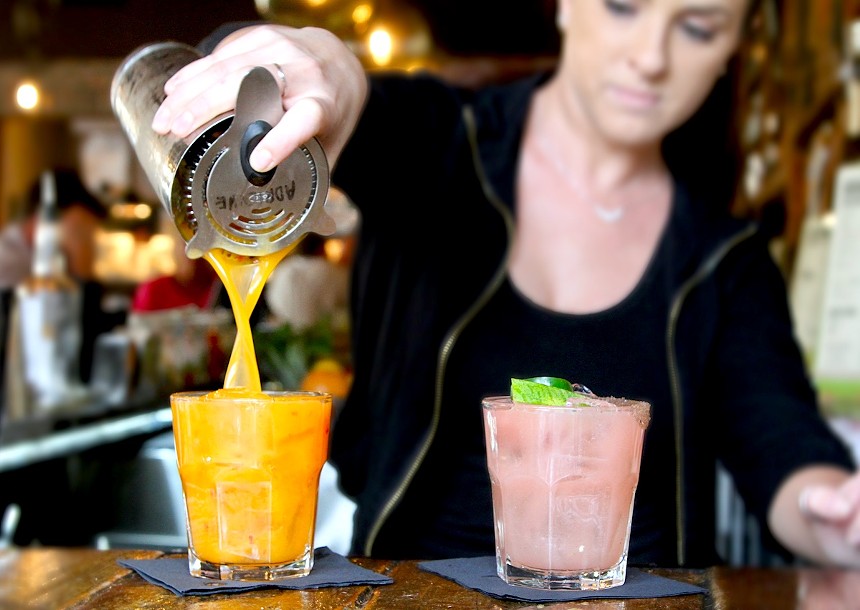 Nicole Danna
For some live music.. Tin Roof, a Nashville-based bar and restaurant chain centered around live music, has become the hotspot for live tunes in downtown Delray Beach since opening earlier this year. The venue tailors its performances to the local music scene, meaning you'll be able to catch everything from indie-rock and pop bands to country and local acts at the Delray location. The best part: you're guaranteed to find live music seven nights a week paired up with made-from-scratch, Southern-inspired food. The menu includes popular items like Dixie biscuits ($5) and chicken and waffles ($15) along with an assortment of burgers, sandwiches, and salads available for both lunch and dinner ($8 to $12).

For those late-night munchies. When hunger strikes after midnight, there's fast food and — in Delray Beach — there's late-night food. Several spots cater to the night owls in the early morning hours offering everything from a quick slice of pizza to a full meal or tacos and shots. If you're ready a second round (of food, that is) head to Dada, where the full menu is served right up until close at 2 a.m. You can sit down in the dining room or grab a table outside and a server will guide you through the entire dining experience, from appetizers like tuna tartare ($15) to entrees such as the shake-and-bake pork chops ($25) without making you feel rushed. If that's too much, El Camino rolls out its reverse happy hour after midnight, slinging $2 tacos, $3 bottled beer and wine, and $5 margaritas until 2 a.m. 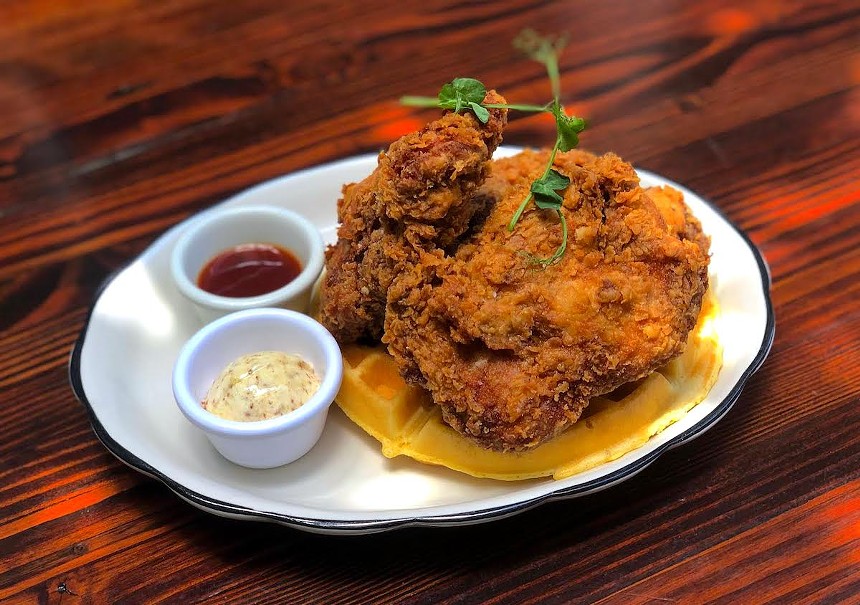 Park Tavern
For dancing. Luckily, downtown Delray Beach has a few options if your inner dancing queen is begging to be unleashed. There's Johnnie Brown's for the touristy, older crowd that likes to jam out to local rock bands — we aren't judging if this sounds awesome to you. For the sophisticated clubber, Honey will fill the void with its dark, sexy, suave interior and a DJ that will keep you sweating out those vodka tonics. And then there's Salt 7. While it's known for its Sunday brunch, it's so loud and booze-fueled on weekend nights that it might make you want to grind on complete strangers.

For brunch. If you manage to make it through the entire night unscathed — congratulations. You'll need some hair of the dog at this point, and there's no better place to keep the good times going than with brunch at Park Tavern. It's still the most popular spot for a killer Sunday brunch, and snagging a seat at the bar or on the covered outdoor patio just makes it that much better. It's also the best deal in town for bottomless drinks, priced at just $9 per person for mix-your-own mimosas (or upgrade to $12 to toggle between mimosas and bloody marys). If you're hungry again, don't worry — the menu offers over two dozen options that range from lighter fare like deviled eggs ($6) and a grilled tuna salad ($21) to heartier plates including crab cake eggs Benedict ($15), fried chicken and waffles ($16), or shrimp and grits ($16).
KEEP NEW TIMES BROWARD-PALM BEACH FREE... Since we started New Times Broward-Palm Beach, it has been defined as the free, independent voice of South Florida, and we'd like to keep it that way. With local media under siege, it's more important than ever for us to rally support behind funding our local journalism. You can help by participating in our "I Support" program, allowing us to keep offering readers access to our incisive coverage of local news, food and culture with no paywalls.
Make a one-time donation today for as little as $1.